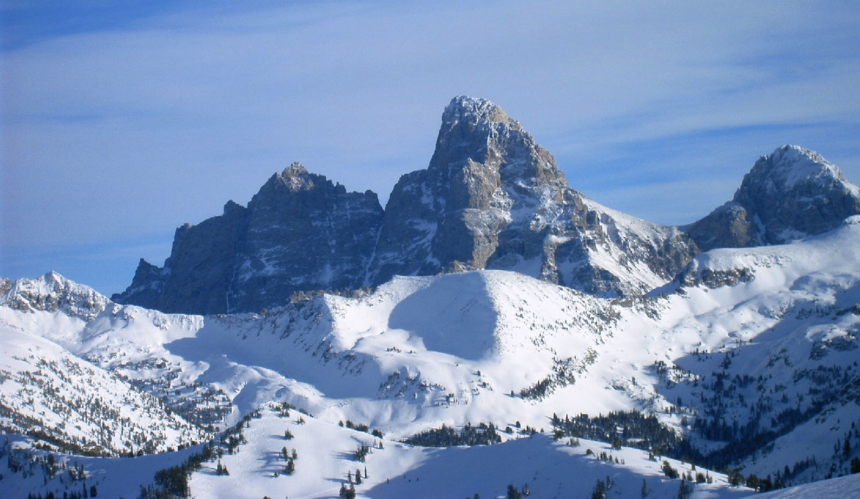 A view of the Tetons looming over the Grand Targhee backcountry. Wikimedia Commons photo.

The Bridger-Teton Avalanche Center is reporting that three skiers were buried on Tuesday, January 7th by an avalanche in the Grand Targhee backcountry. Two of the skiers were partially buried, and one was fully buried. All three were successfully rescued by other members of the group.

The slide was triggered by an individual skinning uphill in the Hollywood Rocks area near Scotty's Gate. Recent snowfall has raised the region's avalanche danger to 'considerable' above 7500 feet, and likely contributed to the large slide, which had a 3-foot crown and ran between 600 and 750 feet. For more information on how to stay safe in avalanche terrain, see TGR's Safety Week series here.

At about 2:45 PM on January 15th, 2020, a large avalanche released on the south face of Taylor Mountain, a prominent peak near Teton Pass. The slide, with an estimated eight-foot crown, sent a cloud of snow into the Coal Creek drainage. Four separate sets of ski tracks leading into the slide path stirred fears that someone could have been buried, but four tracks led out of the debris. Search and rescue conducted a search regardless, and found no one.  RELATED: Fatal Avalanche Incident in

Crystal Mountain to Limit Weekend Visitors Due to Overcrowding

Crystal Mountain to Limit Weekend Visitors Due to Overcrowding

After a slow start to the season, the Cascades have finally begun receiving significant snowfall— great news for powder-starved Northwestern skiers and snowboarders. Unfortunately, their zeal, combined with a growing number of regional skiers and snowboarders, has been causing major problems at local ski resorts like Crystal Mountain and Stevens Pass. Road conditions have been abysmal, parking lots have been filling up at record rates, and many have found themselves driving hours only to be