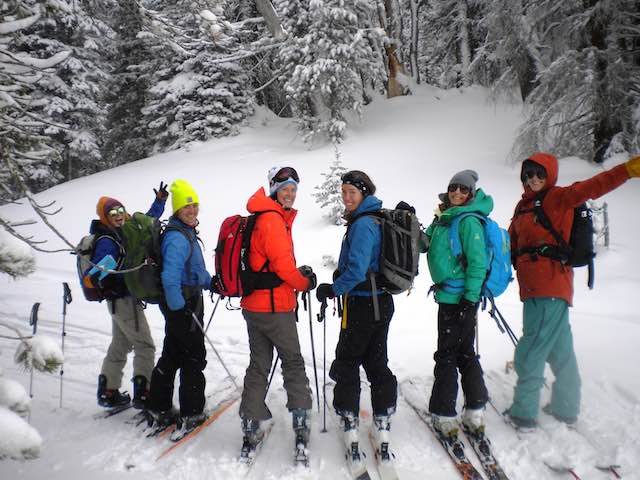 "I think as humans, we like being around people who are more like us. It’s just the human condition to be understood.” Carisa Barnett photo.

In the last year, the number of all-women’s avalanche classes has increased. Wait, I take that back. They have only just emerged. Thanks to organizations like SheJumps, and films like Pretty Faces, more women are starting to get outside and into the backcountry. But in traditionally male-dominated sports like skiing and snowboarding, women seem to be met with a challenge when it comes to breaking into backcountry riding. Going out with their gung-ho male partners might not provide the best platform for women to gain enough confidence in their knowledge and abilities.

That’s where all-women’s classes come in. These classes can provide an atmosphere where many women feel more comfortable speaking up, asking questions, and gaining confidence in themselves and their newfound abilities as informed backcountry travelers.

This is not something that is black and white, and not all women are the same.  But I do believe that these classes offer something amazing for certain girls, and think we need to spread the word about this new opportunity for women!

We are all just people... but there is something different about having all women. It’s so hard to describe. I think as humans, we like being around people who are more like us. It’s just the human condition to be understood.

“We are all just people,” said ski guide and avalanche instructor Nancy Bockino. “And everyone brings something different to the table. But there is something different about having all women. It’s so hard to describe. I think as humans, we like being around people who are more like us. It’s just the human condition to be understood.” 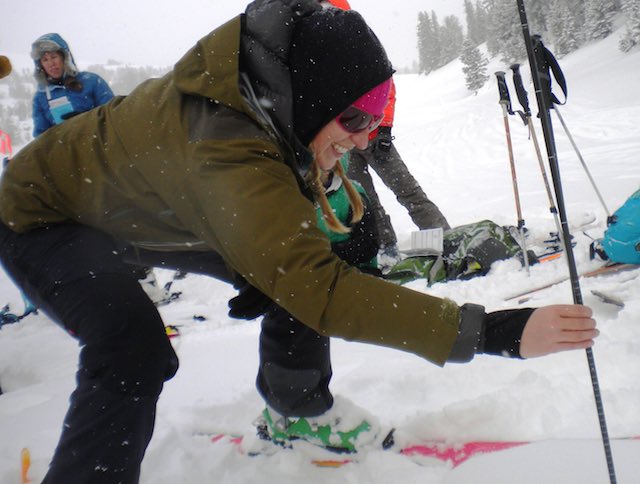 This could be you, taking advantage of the small but growing number of women's-only avalanche courses. Carisa Barnett photo.

Darcy Chenoweth is a climber, skier, and mountaineer out of Missoula, Montana. She started teaching a three-day avalanche awareness course for all women last year. “It’s just kind of a prerequisite for the Avy 1 course,” she said. It was a bunch of women gathered in a yurt in the Swan Mountains of Montana digging snow pits, learning how to travel safe in avalanche terrain, and skiing pow for three days. “The excitement of these women was infectious. It was enthusiasm at its purest, and it was such a pleasant surprise,” Darcy said. 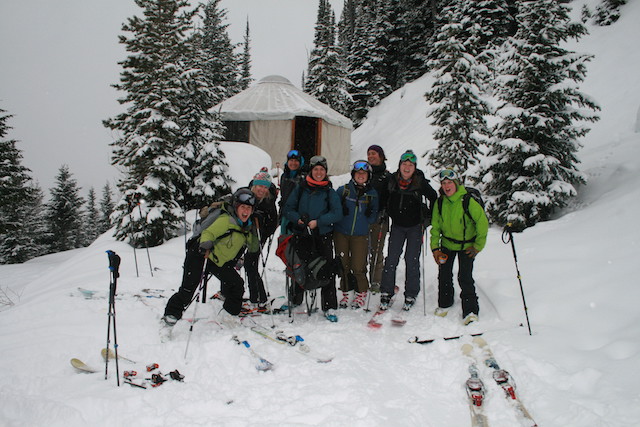 Darcy taught the same course again this year, and will teach her first all-women’s Avy 1 class in a few weeks. Like many high caliber and experienced mountain women, Darcy’s partners have always been mostly guys. “For many years I’ve been skeptical of all women’s things because all my partners have been men,” Darcy said, “but just recently I realized how much I crave going out with girlfriends. After I did my first avy awareness last year it was such a blast. The perspectives of the women in my class were so eye-opening for me.”

Darcy and the girls in her course experienced how great getting a bunch of outdoorsy women in one place can be. And how it allowed for her group to talk openly about what it’s like being a woman in the backcountry and how gender plays into our decisions in the backcountry. 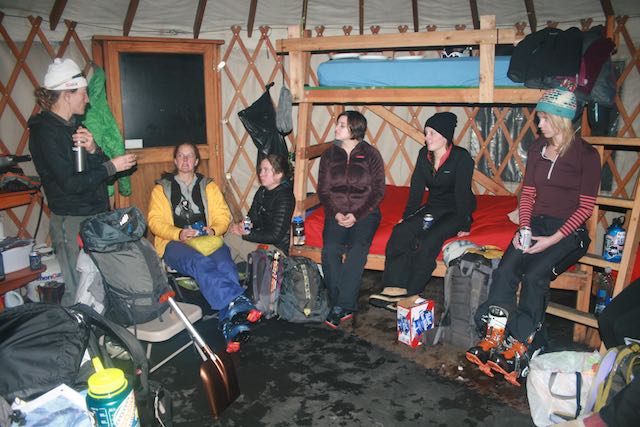 In the hut for Darvy's three-day backcountry course in the Swans. Sarah Halverson

So why do women opt for these classes instead of coed classes? I interviewed two different instructors and a student and everyone more or less came to the same conclusion. What the instructors have noticed is that women decide to take an avalanche class to gain the confidence they need to feel safe in the backcountry. And the student explained how that confidence is more easily attainable— at least for her and others in the class— in a group of other women. 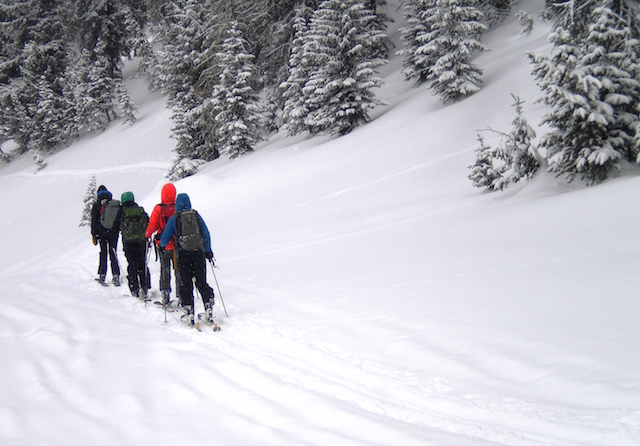 An all-gals troupe heads out into the backcountry. Carisa Barnett photo.

Darcy found similar differences in her classes, and both instructors found that the girls in the all women’s classes seemed more comfortable asking questions, speaking up, and admitting where their skills were lacking.

“There’s a super obvious difference between the all women’s classes I’ve taught and coed,” Darcy said. “I notice that women don’t ask as many questions in the coed classes. When we are analyzing pit data it’s the men that are asking the majority of questions. So I think in those coed classes a lot of questions go unasked.” 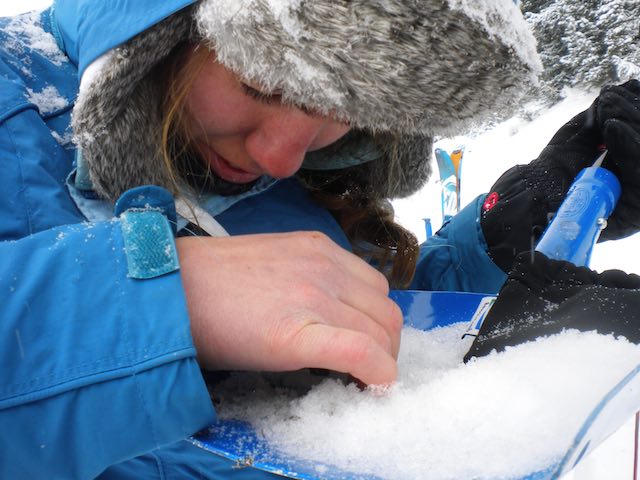 “Nobody wants to ask how to do a kick turn in front of guys who already know how to do it!” Cassandra Skipitis told me. Cassandra just finished her first Avy 1 course. “None of us were afraid to be new at something or ask question when we didn’t understand.”

Cassandra emphasized that she rides with a lot of guys, and has tons of fun with them, but she can feel intimidated not only by the mountains but the people around her. “I think sometimes I am too afraid to speak up about something with other guys.” She admitted.

“I think the women in the all women’s class felt less pressure to be backcountry savy prior to the course,” Nancy said. “I think they felt like they could come there and learn as we go instead of showing up and already having experience. It was wonderful to see their confidence change in just four days.” 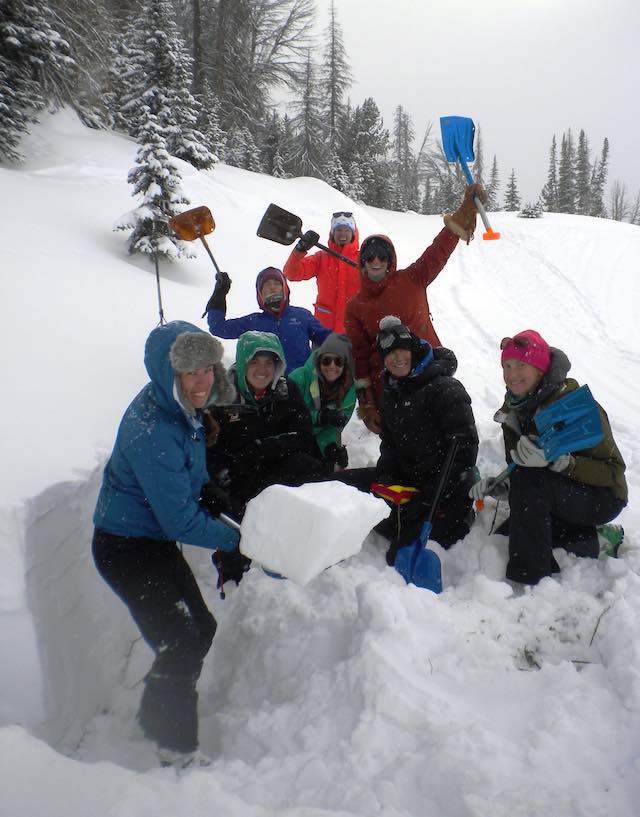 There are so many reasons why a woman might want to take a course like this. Maybe it’s to take it with your best girlfriends, or the desire to meet other potential backcountry partners, or maybe it’s just because there is something different about being with all ladies.

The bottom line is we want everyone to be safe and feeling super good out there. And whether you are stoked on these classes or not, I think Nancy said it best in her interview, “For me, I’m so excited to be able to share the gift of going in to the mountains and If women want that and they feel better getting it from another woman then that is great. I want every girl to be able to look at the Tetons and say, with confidence, I can go in those now.”

Think you want to take an all-women's course? Check out these awesome groups offering courses this winter:

Backcountry Babes:  They have actually been offering all-women's classes for the last 18 years! They're hosting all women's steep ski clinics at Wolf Creek and Silverton, CO this February, and a hut trip to British Columbia in March.

YurtSki: Offered an introductory backcountry class and a Level 1 course, both just for women, out of their yurts near Missoula, Montana in December and early January (these were taught by Darcy Chenoweth).

View All
Sign in to comment
tags: women in the mountains |women |she jumps |backcountry skiing |avalanche education |avalanche courses Loved seeing this article! I’m in the middle of an all girls class now and love it.  It’s definitely noticeable how different the conversations are and I’m asking all the “stupid” questions I didn’t get to ask in my coed class.  It’s interesting to see how similar us girls think on risk tolerance and other topics so it has made me feel more confident in speaking up because I know I’m not the only one.