These days, Cam Riley might be just as focused on making films as starring in them, but that doesn’t mean he can’t do both when the time is right. Luckily for everyone involved, the time was right this past winter in the streets of Norway, and Riley was dropping hammers left, right, and center. In an age when street skiing is progressing faster than ever, Riley somehow manages to stay ahead of the curve year in and year out. Maybe it was the creative Scandinavian vibe, maybe it was the conducive urban planning, or maybe herring is a street-skiing superfood. Whatever the reason, Riley’s Winterland segment isn’t one to miss.

RELATED: Clayton Vila, Sean Jordan, and Cam Riley in DUE

Combined with the dream team of Sean Jordan and Clayton Vila (who happen to be some of his closest friends) Riley has been injecting gritty urban skiing with a distinct flavor of artistic cinematography, putting together eerily beautiful segments in TGR films year after year. Uniquely, Riley plays both the role of skier and cameraman, which turns out is a huge advantage in capturing the hectic dance that is urban riding. We caught up with Riley this fall to hear how he does it, his views on the future of skiing, and what he has in store in the coming years. 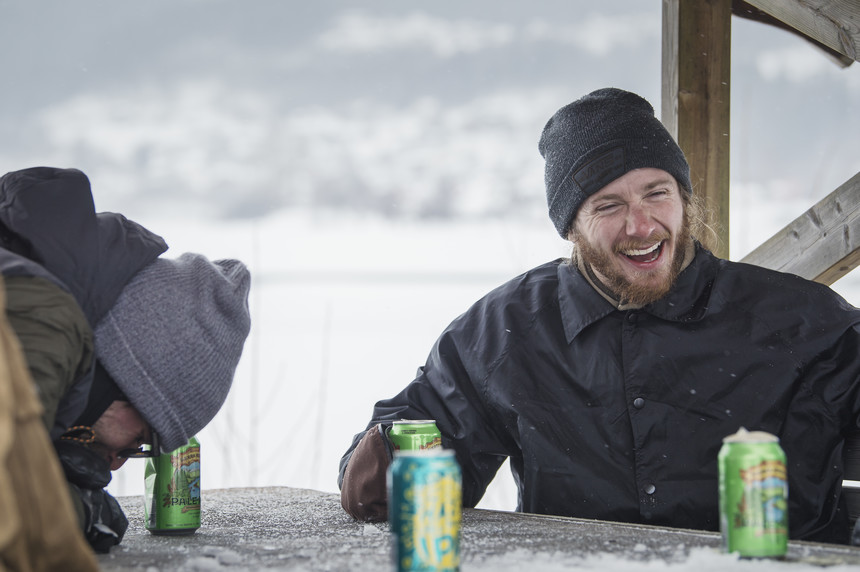 Despite its gritty reputation, for the most part, street skiing is all fun and games. Nic Alegre photo.

TGR: Can you sum up your season last year filming for Winterland?

Cam Riley: Ha, of course. To be honest, it didn’t involve as much skiing as I would have liked it to, given that I’m balancing my skiing with being Director of Photography at Stept Studios. It’s great to have a real job doing what I love, and then still be able to go out and put together a segment with my friends for TGR in the winter! Clayton, Sean and I thought of a couple of locations, and ultimately settled on Norway. I had been to Scandinavia to ski many years ago, so I was excited to go back, but Oslo and Lillehammer were totally different from what I expected.

TGR: What does that mean? It’s a winter sports-obsessed country, how did they take to urban skiing?

CR: It was actually pretty hard to find the spots we needed to ski. We’re looking for stuff that’s a combination of what looks good on camera, is interesting to ski, and is a place we can camp out for a few hours to build take-offs and landings and get everything set up. Norway’s architecture isn’t all that conducive to urban skiing, it turns out that they build most of their handrails out of aluminum, which really isn’t great because your steel edges dig in and you end up eating it. So, we spent a ton of time searching around Lillehammer and Oslo for spots that fit the bill before we found what we needed. Then it was game on. 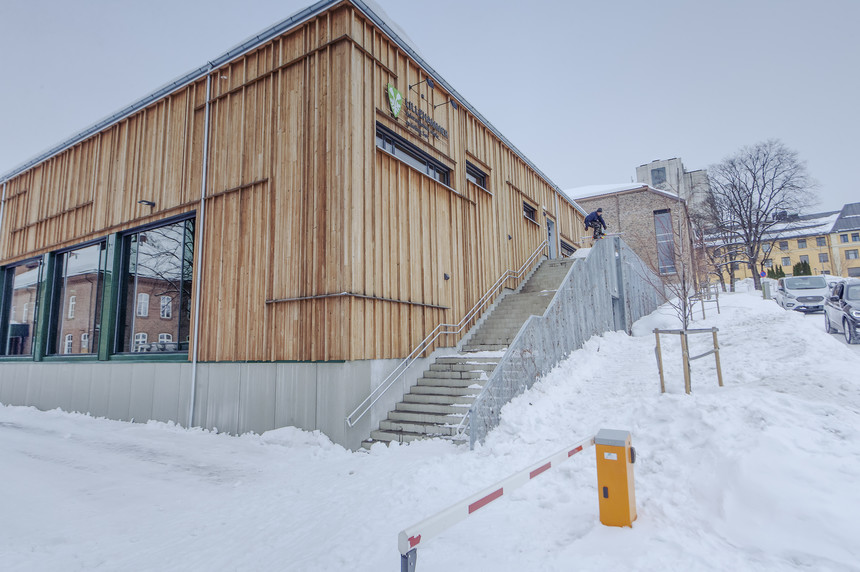 Did Riley make the whole rail? Find out in Winterland. Nic Alegre photo.

Most of the time around Lillehammer, the locals were pretty down with what we were doing. I think they were somewhat familiar with street skiing, which is helpful. A lot of the population there are skiers themselves or enjoy winter sports in one way or another, so they were almost encouraging. Once we got to some of the grittier neighborhoods in Olso, though, that’s when we ran into some heavy opposition.

TGR: What happened? Did you get screamed at in Norwegian?

CR: Ha, they definitely screamed at us in Norwegian, but pretty quickly figured out that screaming at us in English would work better, so we had to deal with a lot of that. At one spot, we got chased out of an apartment complex by a maintenance guy driving a front-end loader. He had a huge problem with us. I think after us throwing somewhat of a bribe his way, he was especially not hyped on us. He threatened to call the police on us, so we decided “ok, we’re just going to leave then.” Instead of letting us leave, he decided to chase us with his front-end loader, so we had to drive down a sidewalk through the woods to evade him. We ended up getting away without any real trouble. That area was definitely a no-go after that. 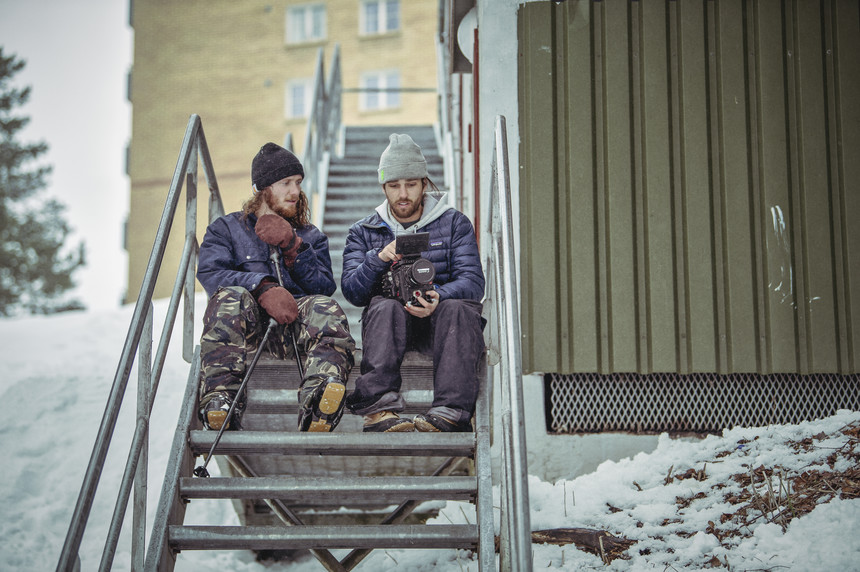 TGR: It’s worth thinking about how the risks you guys deal with are so present and also so different from big-mountain skiing.

CR: No kidding, at least we’re not dealing with avalanches! I feel like for us, we put so much work into building a spot and getting it ready to shoot that were not going to go down without a fight if we get some opposition. In that case, it seemed like neither was that guy though.

TGR: In terms of urban skiing in general, it seems like we’re seeing the sport grow thanks to the internet. What direction do you see it heading?

CR: I think freestyle skiing in general has seen a bit of a resurgence, and a large part of that is street skiing, which is pretty cool. I mean for myself, it’s always about just going out and having fun on skis in my own way, and it’s great that other kids are experiencing that too. Honestly though, urban skiing as we see it in the movies has probably faded a bit, as we see fewer and fewer feature-length ski movies coming out every year. Ironically, capturing urban skiing is actually pretty expensive – you need infrastructure like lights, a generator, a winch, tools to move lots of snow around – it’s a pretty big production to do it the way we do. 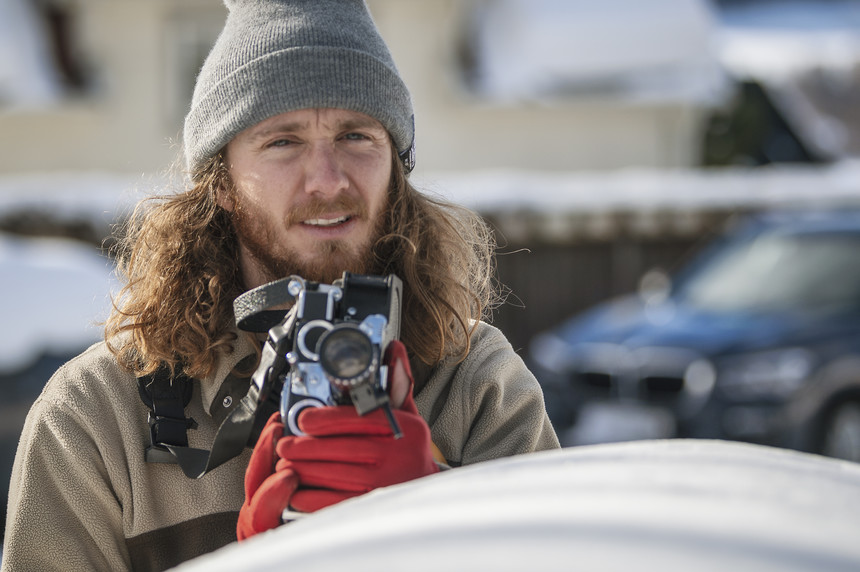 However, I think that the rise of short web clips like what you see on social media has given kids a chance to do things their own way with little no extra money. Kids have a desire to do it and will make it happen regardless. I’m in the later years of my career, so it’s really good to see some young kids out there crushing it, doing tricks that I could never do. There’s a lot of creativity in what people are doing in the streets these days, and it’s cool that people are still progressing it. For me, progression means going big and going fast, and that’s definitely still happening.

TGR: You spend equal amounts of time both behind and in front of the camera on projects like this, what does that allow for in terms of creating a segment?

CR: We got introduced to filmmaking through our own ski movies years ago. These days, it’s Clayton and my main occupation – I’m a commercial director of photography in a production company that focuses on commercials and documentaries and that type of stuff. I’ve been able to take a lot from that new experience back into skiing. When we go out and try to shoot a ski part, we’re definitely thinking about it from that angle, and taking a creative approach to capturing it while still staying true to action sports and skate films. We want to show the action in the best way possible, and there’s definitely an art to that.


TGR: What are some techniques that you use to capture your skiing in a unique way?

CR: I really like to blend high-level cinematography with a grittier style, like that taken from old-school skate films. In terms of specific techniques, we used a lot of precise gimbal and other stabilized camera work in our last two parts in Winterland and Far Out. For me, it gives the viewer a much more immersive experience in the action. I really like creating these dynamic shots, and those really fit in with the larger TGR films that are full of really cinematic shots. There’s a shot in Norway for example where we had this dynamic shot tracking a skier with stuff moving around in the foreground, kind of like how TGR would shoot those beautiful heli shots with mountains tracking in the foreground. Totally different scale, but it’s really the same effect.

TGR: What does the future hold?

CR: Pretty simple! I’m stoked to keep skiing and really keep the dream alive for as long as I can. I’m definitely getting a little older, but I feel good and ready to keep pushing it for a few more years. We’re busy working on a project with Henrik Harlaut that will be dropping in a few months, and I’m actually stoked to get out and ski for that in a few weeks. Other than that, hoping to get the chance to drop another segment into next year’s TGR film if everyone’s cool with that!

Wow! Riley is living the best life I can think of. I wish to see him in person really really bad.
fence installers charlotte nc

The ideas are helping the readers very much amazon aws cloud computingto do different ideas easy to make the page special to do the different task easily than any other page.

AWESOME stuff here. Man, if I lived out there I would never get any work done! Sounds like y’all have a lot of fun.

This is a super cool new way to think about skiing. Urban skiing is something I’ve never heard of, but they make it look pretty cool

Last week, some of the world's finest rail skiers descended on Seven Springs, PA to compete in the inaugural Steel City Showdown, a rail jam hosted by the one and only Tom Wallisch. With $20,000 on the line, the event attracted everyone from Olympic gold medalists to unknown youngsters. The field was cut down to ten for finals, with a solid mix between well-known competitors like AHall, Colby Stevenson, Evan McEachran, and Alex Bellemare, and less known skiers like Tucker Fitzsimons, Bobby