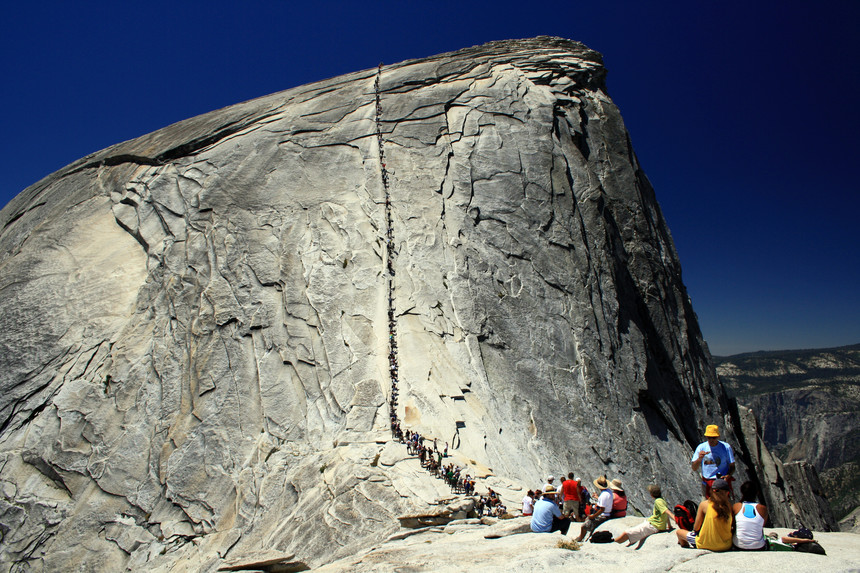 The fixed-cable route up Half Dome is often crowded. Wikimedia Commons photo.

29-year-old Danielle Burnett of Lake Havasu City, Arizona, passed away on Thursday, September 5th after falling 500 feet from the fixed-cable route up Half Dome. An eyewitness posted non-graphic photos of the pre-incident scene, and described what happened:

"The girl wasn’t on the outside of the cables. She was at least 30’ above us. We heard a commotion, she was starting to freak out. It had started to lightly sprinkle. She had decided to turn around before making it to the top, her group of 3-4 continued on. I saw her shoes slipping on the rock. It wasn’t that wet yet but maybe she had a poorly chosen pair of shoes. Regardless, I watched as her shoes slipped on the rock, she fell hard and lost her grip on cable. Someone had said she was even using a carabiner but it obviously wasn’t clipped in at that moment. She started sliding down and to the right of the cables. My friend got down on her stomach to try and grab her....she went by her and I stretched out and tried to reach for her with my right hand but by now she was probably 10’ to the right of the cables and too far for me also. She slid past screaming and she went over an edge. She fell about 500’ and you could see her from the top of sub dome. Everyone was evacuated from the cables and subdome so the helicopter could fly in." - Shawn Slimp, via Facebook.

The National Park Service has instituted a 300 hiker-per-day permit system to cut down on the trail's overcrowding, but there have still been tragedies on the hike. Just last year, a hiker fell to their death after slipping off the trail during a thunderstorm. For more information on how to stay safe while hiking Half Dome, see the National Park Service's website.