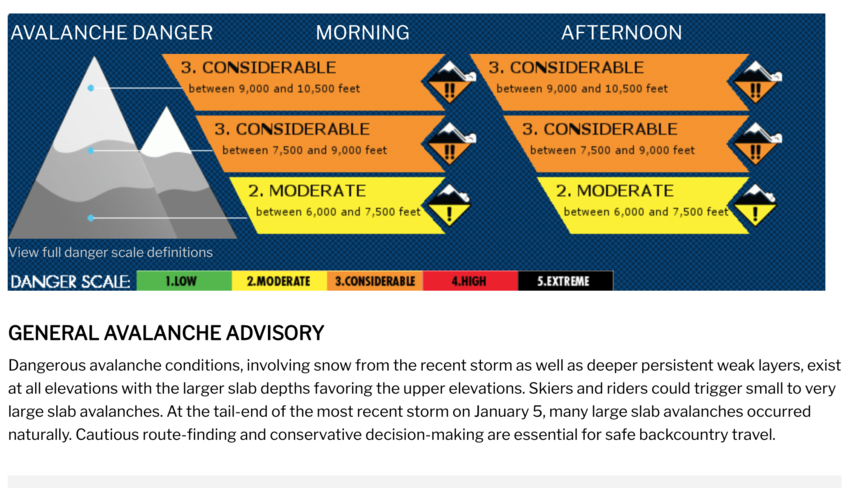 Every morning, before you go out into the mountains, make sure you are checking and understanding the avalanche forecast for the day.

Checking the avalanche forecast every single day you go out and understanding what it means is one of the biggest things that will keep you safe in the mountains this winter. For those of us who don’t get to ski every single day, or those of us lucky enough to travel and ski, you’ll know that it’s pretty much impossible to keep a close eye on what the local snowpack is doing without digging around and poking your head into the snow. Thanks to our nationwide network of local avalanche centers, making decisions and gathering snow data has never been easier. Below is a list of all the avalanche centers in North America. Please consider donating to help support these organizations!

Avalanche.org has a map of all forecasting zones of every avalanche center in the United States.

Covers the entire state of Colorado.

Covers the entire state of Utah.

Covers the Eastern portion of the Sierra Nevada range.

Covers the Pacific Northwest, including the Cascade Volcanoes.

Covers Southwestern Montana, including the area around Big Sky and Bridger Bowl.

Covers the mountains of Northeastern Oregon, including the Wallowa Range.

Covers the mountains of Northern Idaho, including Silver Mountain and the Schweitzer area.

Covers the mountains of West Central Montana surrounding the city of Missoula.

Covers the mountains of North Central Arizona surrounding the city of Flagstaff.

Covers some of the major ranges of Alaska, including the Turnagain Pass and Kenai Peninsula zone, the Haines, Valdez and Cordova areas, the Chugach Range, Hatcher Pass, and the Eastern Alaska Ranges.

Covers the mountains surrounding the city of Juneau.

A nationwide network that covers all of Canada’s main ranges.

It's the most wonderful time of year here in Jackson Hole--the snow is falling, features are getting filled in, our legs are finally in ski shape, and OH YEAH King's and Queen's of Corbet's Couloir starts this week. One of the best freeride events Jackson Hole has to offer, King's and Queen's features twenty-seven skiers and snowboarders as they huck themselves into the famous Corbet's Couloir in hopes at the title of King or Queen of Corbet's. Last year's competition not only saw