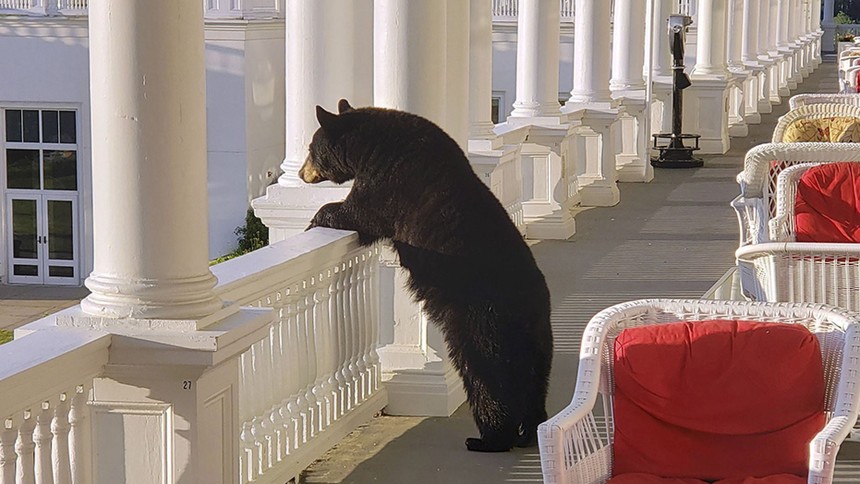 You probably think that you’re pretty classy. You bought your tux for your prom ten years ago, planning to return it, but after Sally Johnson had too much of the punch at pre-prom and spilled an entire plate of lasagna on you, the shop refused to take it back. Now, it hangs in your closet, baptized by an aging red stain that somehow still smells of that fateful night. But you’ll be damned if you let it go to waste, so whenever a formal event of any kind arises in your schedule, you break out ole’ faithful.

You thought you were pretty classy. Until now.

It’s important to understand that everything is relative. Compared to Cody who once brushed his teeth and lives in his Tacoma, ya, sure, you’re kinda fancy. But, this bear. My god this bear. Leaning over the balcony of the nicest hotel in New Hampshire, looking wistfully at the sun rising over the grand Mount Washington, this bear is the Great Gatsby of bears. This bear ain’t no “local bear”—this bear owns a trendy coffee shop in Brooklyn and his dad works at Morgan Bearly.

So, next time you’re feelin’ yourself just a little too much, think back to classy bear, and check yourself.

Pro skier Sam Schwartz launched Avant Delivery with hopes of making his hometown of Jackson, Wyoming more sustainable. Katie Cooney photo. With both Grand Teton and Yellowstone National Parks as well as a plethora of public land right in its backyard, the city of Jackson, Wyoming is immersed in some of the most breathtaking landscapes you can find. But Jackson, like many cities in the United States, is also home to an ugly problem: there’s no way to recycle most single-use