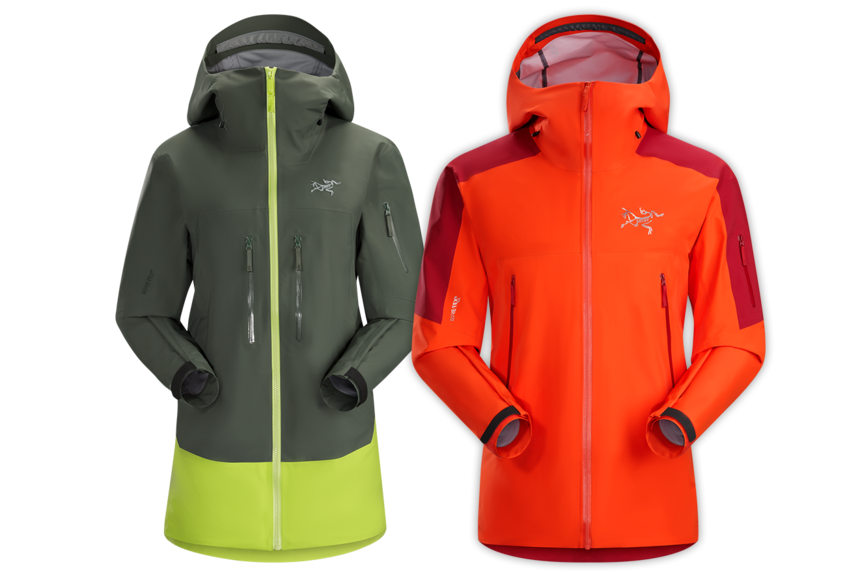 This winter, Arc’teryx is unveiling their new women’s Sentinel LT and men’s Rush LT jackets, a hybrid between a ski touring and freeride jacket designed to feel invisible while moving in the mountains. Arc'teryx photo.

What do you get when one of the world’s most respected apparel manufacturers teams up with athletes like Eric Hjorleifson and Christina Lustenberger to create the ultimate ski jacket? Well, simply put, the ultimate ski jacket. This winter, Arc’teryx is unveiling their new women’s Sentinel LT and men’s Rush LT jackets, a hybrid between a ski touring and freeride jacket designed to feel invisible while moving in the mountains. These two jackets are a perfect choice for anyone looking to upgrade to a premium-level Gore-Tex shell for lengthy ski missions in the alpine.

The new Sentinel LT is available directly from Arc'teryx here. 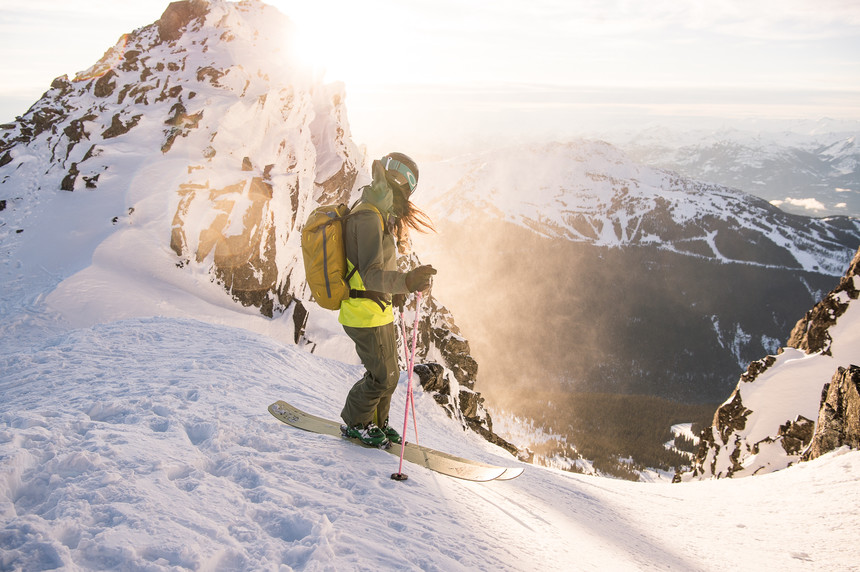 It’s easy to find a jacket these days with the prerequisites of any good backcountry jacket: weatherproof Gore-Tex fabric, a big hood, venting zippers, and a powder skirt. This one checks all those boxes, but take a look at the Sentinel LT, and you’ll quickly realize it stands out from the pack.

For one, the jacket simply FEELS better. Thanks to Gore C-Knit fabric backing the outer 3-Layer weatherproofing, the jacket feels supple and soft, and gone are the days of stiff hardshells that felt akin to wearing a plastic bag. The jacket’s longer-than-normal fit makes sure it doesn’t ride up when skiing aggressively with a pack and adds an extra layer of protection when you sit down in deep snow.

Arc’teryx athlete Lucy Sackbauer says, “The jacket’s material gives it almost a fuzzy flannel feel, making it not just a hardshell. I’d grab this jacket for long tours, storm days, or simply banging laps at the resort.” While fitted, Sackbauer adds that the Sentinel LT has plenty of room for extra layers on super-cold days.

“I truly love how long the jacket is, a lot of my older ones tended to feel way too short, but that extra coverage is pretty awesome in the backcountry,” she says.

RELATED: See Lucy Sackbauer in Action During the Summer Season

In terms of pockets, Arc’teryx thought through every scenario this jacket would find itself in. Keeping in mind the fact freeride skiing has evolved to the point where many skiers now carry and wear climbing harnesses, the Sentinel has two breast pockets, two harness-friendly side pockets, a shoulder pocket for a ski pass, and an interior goggle/skin and phone pocket. Pit vents with glove-friendly zippers keep ventilation a breeze. Sackbauer reckons she doesn’t even use the pit vents much because the fabric breathes well enough on its own, even on steep uptracks.

The new Rush LT is available directly from Arc'teryx here. 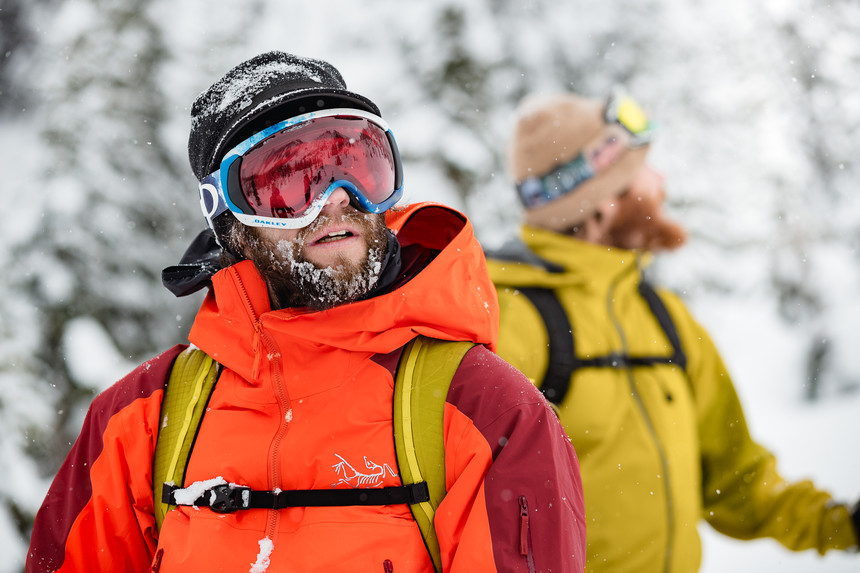 Sarah Wallace, Arcteryx’s Whiteline design manager, weighs in on the Rush LT, an ultra-lightweight ski jacket for men. The jacket was developed largely in collaboration with ski and gear mastermind Eric Hjorleifson, who saw a need for a lightweight alpine jacket designed first and foremost for skiers.

“Our concept was to create shell that was as lightweight as possible that would hold up to many seasons’ worth of hard ski touring,” she Wallace. Looking through their lineup of existing alpine jackets, everything seemed like some form of compromise between performance, fit, and durability, so the team started from scratch.

The result is a jacket that, at a scant 400 grams, feels so light it’s easy to forget that it’s there. However, ultra-lightweight doesn’t mean no protection; the jacket is reinforced in key areas around its shoulders and waistbelt (for skiing with a pack) and is fully weatherproof with N40p-x Gore Tex Pro fabric. Wallace adds that the “p-x” designation is Arc’teryx in-house lingo for the most durable fabric in its weight class.

Skipping out on a powder skirt in the name of weight, the Rush LT instead features two straps that clip onto Arc’teryx bibs to keep snow out. Again, like on the women’s Sentinel LT the LT designation means the fit is long enough to cover key areas, especially when riding with a harness or pack. 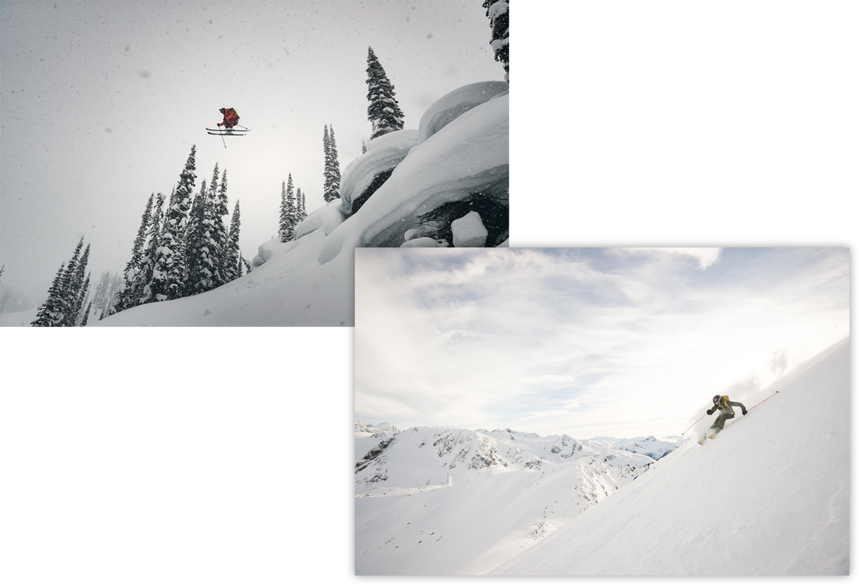 While the jacket doesn't guarantee you'll be doing any of this, it definitely guarantees you'll be comfortable if you try. Arc'teryx photos.

Both the Sentinel LT and Rush LT jackets fit square in the category “the ultimate ski touring jackets,” featuring a careful balance of everything a backcountry skier will need and light weight. Better fit, the best material for the job, and thoughtful design elements make these an great choice for that next piece of outerwear.

From The Column: Top Shelf