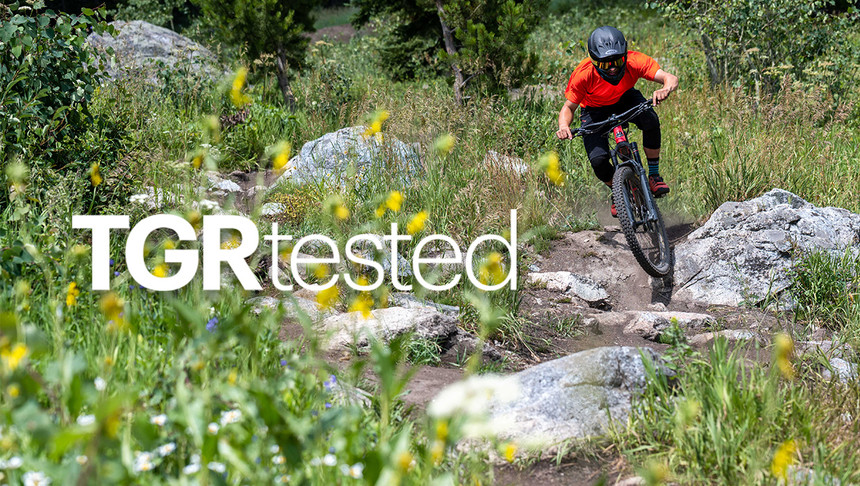 When two products are released back-to-back that promise to complete change the way you ride your bike, we’ll consider that a good summer. With Fox releasing their heavy-hitting Float 38 enduro fork earlier in the season, RockShox followed suit with their own take on the matter: the Zeb. It’s a purebred enduro race fork for the gnarliest riding you can muster, and after testing it all summer, we were truly impressed. It's a fork that inspires confidence to the point that it will have you trying new things on your bike, pushing your speed limit faster than ever before, and simply making your riding more fun. While its intentions are similar to the 38, the fork adds its own flavor to the mix, and that’s a good thing. Read on for more.

Named after Zebulon Pike, the namesake for the mountain that towers above RockShox’s Colorado Springs development lab, the Zeb breaks new ground for RockShox. In a conversation with Chris Mandell, RockShox’s product manager, I learned a bit more about the development story of the new fork. In a nutshell, the Lyrik (RockShox’s previous enduro fork), performed wonderfully for most riders, but it left the elite of the sport begging for more. With enduro races getting gnarlier and faster by the year, and lots of athletes splitting time between the DH track and enduro stages, the lines were becoming blurred. That’s where the Zeb was born. It was RockShox’s answer to the question of how to build a better, stiffer, and more reliable fork for hard riding.

RELATED: The Fox Float 38 Is the Muscle Car of MTB Forks

With 38mm stanchions, a chassis redesigned with stiffness in mind, and travel options up to 190mm, the Zeb’s intentions are clear: the highest level of enduro racing, even breaking into the freeride realm. We’ve seen the fork on the front of pro race bikes like Sam Hill’s and Miranda Miller’s, as well as on the freeride rigs of Kurt Sorge and Graham Agassiz, to name a few. 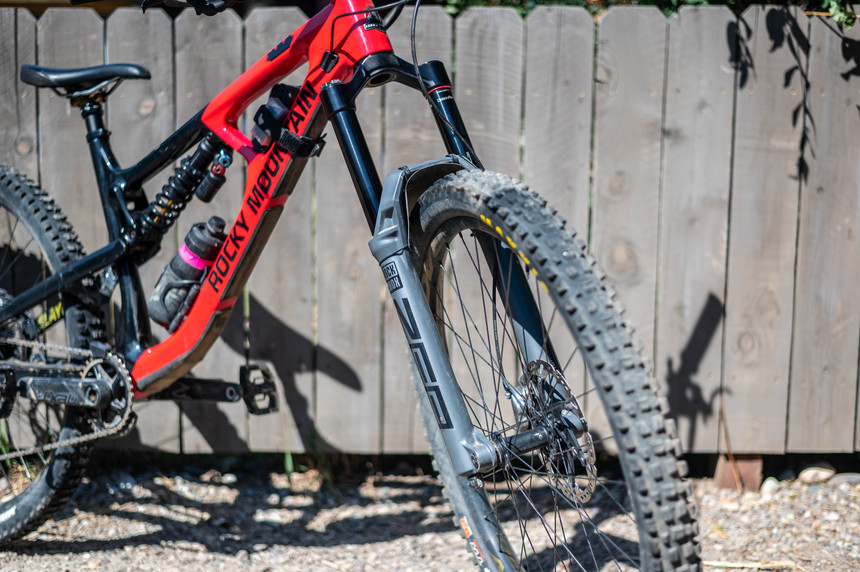 The Zeb felt right at home on the front of a bike like the Rocky Mountain Slayer. Max Ritter photo.

I tested the $999 Zeb Ultimate, the highest-level offering from RockShox in the Zeb lineup. Bolted to the front of a Rocky Mountain Slayer 29, the 180mm travel 29” fork was ready for action. The Zeb Ultimate comes with the re-designed Charger 2.1 damper, featuring low- and high-speed compression adjustment, simple rebound adjustment, and the ability to adjust air spring ramp up through tokens. There’s nothing revolutionary about any of that, as it’s been found in RockShox forks for years, so the 38mm chassis is really the big news.

One thing to note about the fork is the brake mount. True to its intentions, the Zeb can only run rotors 200mm or bigger. So, if you are upgrading from an older fork, take that into account.

Like most RockShox suspension bits, setting up the Zeb is pretty simple. There’s not a whole lot of adjustment range, but what you get is actually quite useful. It took a few bike park laps to get the fork fully dialed to my liking, but nothing out of the ordinary. The compression adjustment, while only having a few clicks, actually feels like it covers a huge range, so consider your settings carefully – one click goes a long way. Also note that the air spring has a much higher volume than on the Lyrik or Pike, so you’ll be running much lower pressures than what you might be used to in order to achieve the same sag. 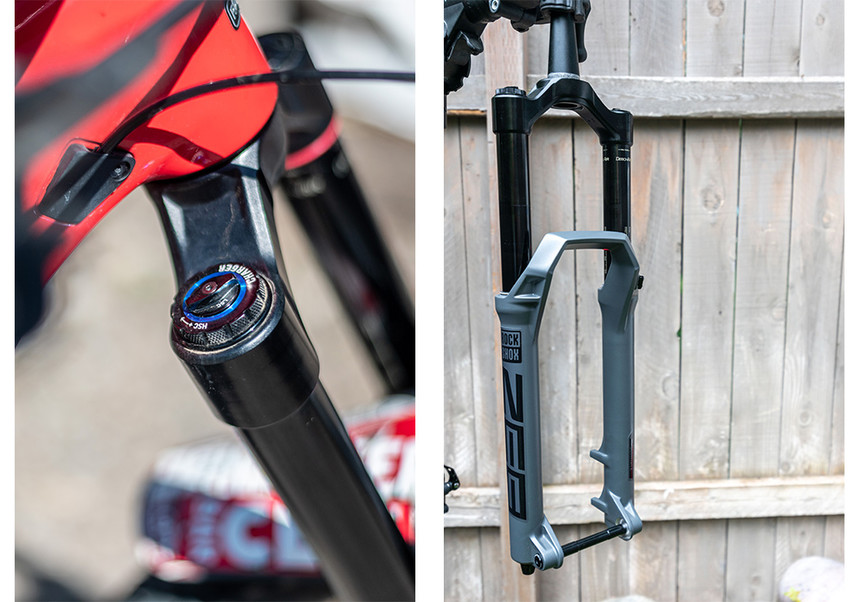 The Charger 2.1 compression adjustment is on top of the leg, with simple rebound adjustment down low. Max Ritter photos.

I weigh roughly 180 pounds with gear and like to prioritize small bump sensitivity and overall smoothness when setting up my suspension. Here’s where I ended up:

Riding the Zeb for the past few months, three things really stood out:

First of all, the Zeb is buttery smooth. Like really really sensitive on the top end. I can say that the small bump sensitivity might be best I’ve ever felt on the front end of a bike. RockShox has gone to great lengths to reduce friction in the fork by using low-friction seals, Maxima Plush fluid, and making the fork stiffer (which reduces binding and friction forces when compressing). What does that translate to on the trail? Being able to keep speed by staying off the brakes for longer in rough sections and preventing hand fatigue on blown up bike park trails. Mess up a line in some tech gnar? The fork will take care of it. Come up a little short on that drop you were eyeing? Zeb's got your back. It's remarkably fun just plowing through stuff you would tip-toe through before, with no sore fingers and rattled-out dental fillings involved. 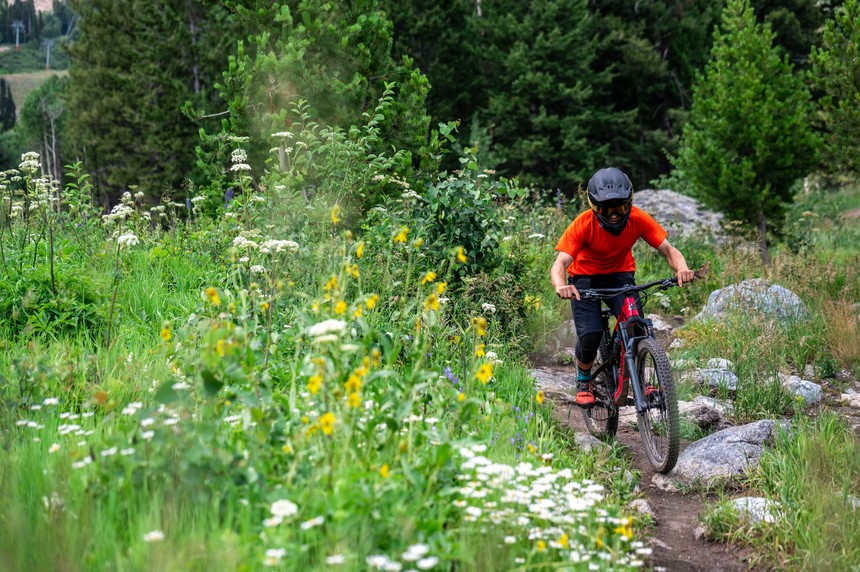 Secondly, the fork is noticeably stiffer than anything else I’ve ridden (save for the Fox 38, more on that later). RockShox claims a 21.5 percent increase in torsional stiffness, with slight increases in lateral and fore/aft stiffness. That’s a big number, and it’s very apparent on the trail. The fork wants to hold a line, no matter how gnarly the trail gets. Comparing it on back-to-back laps against a dual-crown Boxxer, I felt the Zeb had better straightline control. That stiffness also works to increase control in corners, as the fork will not flex weirdly, particularly at high speeds. It’s predictable, precise, and will hold up to pretty much anything.

Finally, the Zeb has been consistent. I’ve tested a lot of forks, and one thing that has always peeved me was how their performance degrades quite quickly over time - even within a few rides, on some models. I’ve clocked 30-40 hours of riding on the Zeb, and it still feels like it just came out of the box. It’s still as supple as ever and I haven’t noticed any oil loss through the seals (especially impressive given how dusty this summer has been). Unlike the 38, the Zeb doesn’t come with air bleed buttons on its legs, but I haven’t ever felt the need to use a ziptie to bleed air from the lowers. I stuck one in just for fun, and surprisingly, no air came out.

In a high-end fork, it’s nice to know that durability and consistency was on the drawing board, and RockShox nailed it.

So now the big question. Should you go with the Fox Float 38, or the RockShox Zeb? My answer is “depends.” On the trail, the Zeb is slightly more supple, meaning more comfort. The Float 38 seems to stay higher in its travel, giving you more support when jumping and landing rough stuff. Secondly, the Float 38 is much more adjustable, if that’s your thing. If you are more of a set it and forget it rider, I’d recommend the Zeb. If you love tinkering, and change settings on every ride based on conditions, the Float is a better option. Finally, at $999, the Zeb is $200 cheaper than the Float 38.

In the end, they are both extraordinary feats of engineering, that will make riding your bike that much more fun. You can’t really go wrong with either. 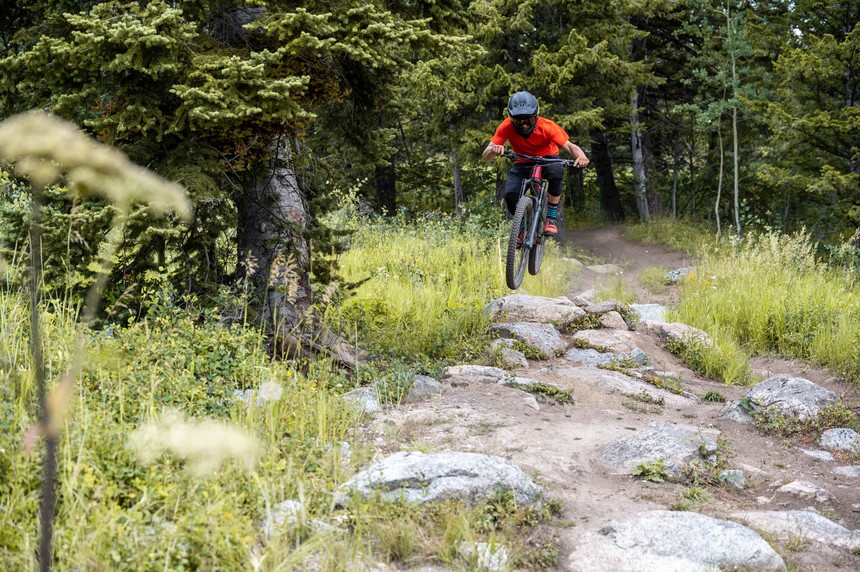 Smooth and supple when you need it, with plenty of support and pop when it's time to get airborne. Katie Lozancich photo.

The Zeb is the best RockShox fork to date, and simply put, it will make you a better rider. It’s more than capable of the gnarliest riding you can muster, is incredibly sensitive, and would be at home on any modern long-travel enduro bike. It begs for faster speeds, and will certainly push your comfort level on a bike by allowing you stay off the brakes for longer, line up bigger airs, and might just help you win that next race.

Dynafit's brand-new Radical Pro boot is a ski touring boot built for skiers. | Max Ritter photo. Ski touring boots are arguably the most hotly-contested niche sector of the industry, with consumers demanding all manner of things from what they put on their feet for big days in the mountains. We want them to be as light as a skimo boot. We want them to be as stiff as an alpine race boot. We want more range of motion than our ankles even allow. We want space-age materials that can be molded

TGR staff writer Katie Lozancich out for a spring walk in Grand Teton National Park. Charlotte Percle photo. Ah, spring. The sun is shining, the birds are chirping, and it’s now the season for 5 AM wake-ups to go corn hunting in the alpine. While the temptation to head south for some desert adventures might seem alluring, it’s worth putting them off a little longer to squeeze those last spring turns from the mountains. Plus, not having to worry about frostbite or wearing a gazillion