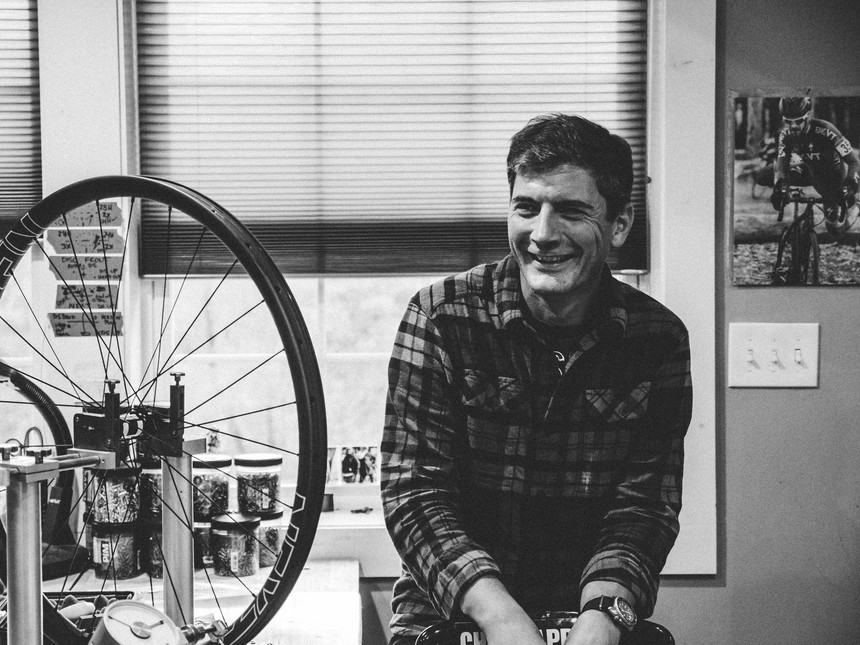 Carbon wheels on bikes are all the rage these days, but with so many options in the industry, it’s hard to stand out as a small brand. Vermont’s Jerry Chabot felt like he needed to offer something unique, so that’s exactly what he did when he started NEXT Cycling. Unlike the giants of the industry, who are known for their unique carbon layups and other nerdy tech features, Chabot decided his expertise lay in precision and the dark art of wheelbuilding. Chabot is a maker in the truest sense of the word, spending hours perfecting every wheelset he delivers by hand to ensure it passes his standards.

Instead of simply offering some sort of next-step technological advantage in the carbon layup of his wheels, he has focused on putting his time and effort into creating the most perfectly round and true wheels money can buy. In the end, he believes that he doesn’t need to re-invent the wheel; instead his approach will offer more performance advantages than throwing money at a lab to develop better carbon. A perfectly round and true wheel will roll faster, smoother and with less effort than even the lightest hyper-carbon wheel that’s not well-built. “I’m not a rim-tech company,” Chabot says, “I’m all about the building of the wheel, I take the best hubs and spokes I can find, and build it to a better standard.” 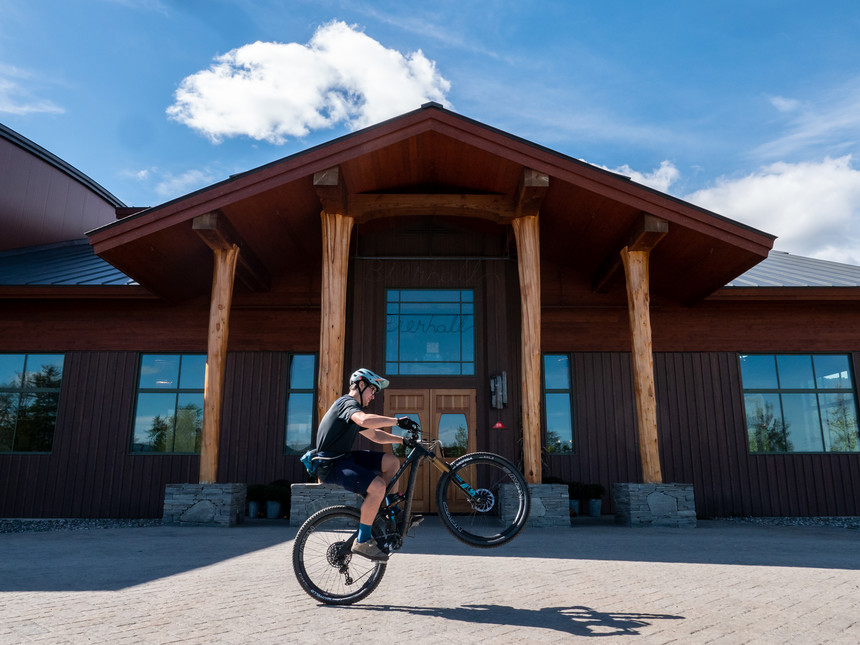 Having some fun on the NEXT Huck wheels. Grant Wieler photo.

NEXT Wheels was born somewhat by accident. Chabot has always been deeply engrained in the vibrant cycling community of the Northeast, racing for and managing road and cyclocross teams that have topped podiums all over the world. As an engineer by training who served as a Marine for eight years including a deployment to Kuwait in Desert Storm, Chabot has always been something of an overachiever. He says he’s not sure if the Marines taught him discipline or if it’s something he’s always had, but it sure has helped ever since.

After finishing out his service in the Marine Corps, Chabot decided he wanted to be his own boss, if only to serve his need for perfection even further. “I’ve always been really into the business side of things, and to me, being my own boss is the logical way of ensuring things go right,” Chabot says. After starting the engineering firm ENGVT, that specialized in consulting across all sorts of projects, he eventually sold the company to one of his biggest clients. Taking the money from the company’s sale left him with some spare cash and lots of time on his hands, so he figured he would dive into his biggest passion outside making stuff: cycling.

Forming a new cycling team with his engineering money, Chabot attracted some friends as well as some big-name riders like cyclocross legend Helen Wyman. One season, Wyman was left without a wheel sponsor, so Chabot decided to step in and help. He understood supply chain logistics and the engineering side of bicycle wheels as well as the best of them, so why couldn’t he make his own? That’s where NEXT Wheels was born. “There’s zero return for an engineering business to sponsor a bike race, so it was really cool to switch to actually having a product and have a return,” says Chabot. Wyman ended up picking up an existing wheel sponsor, but Chabot was determined to capitalize on the momentum he already gained.

Sourcing carbon rims from China became a bit of a learning curve. “Anyone can go buy Chinese carbon wheels for cheap and they show up in a box at your doorstep,” Chabot says, but factory quality control was something he quickly realized was lacking. He would take apart some of the wheels he bought and realize the carbon had huge voids and weak points in it, and manufacturing tolerances for how round or true each rim was were way off. Through some trial and error, and eventually by offering his own engineering expertise as a service, Chabot found a factory that made rims to his liking and started using those for his own builds. Anyone could buy these rims and make their own wheels, but turning that rim into a high-quality wheelset is what sets Chabot apart.

Fast forward a few years, and now Chabot is cranking out handbuilt wheelsets nearly every day, including road, cyclocross, and several types of mountain bike wheels. His process is still all about perfection, and a look into his factory (a tiny workshop in the attic of a Vermont farmhouse) confirms this. There are dozens of carbon wheels in various states of assembly lying around, and what Chabot calls “the best truing stand money can buy” bolted to a table in the center. The truing stand in question, manufactured in Germany by P&K Lie, costs upwards of $2000 and has a tolerance down to 0.05mm. That’s incredibly small, so small that Chabot says it picks up where the rim mold sometimes leave small bumps of residue on the rim edge. On top of the truing stand, he has a tool to cut custom-length spokes and swears by his incredibly accurate spoke tension meter. But it's not the tools that make a great wheelbuild, it's the hands that operate them and the eyes that make sure everything is done correctly. 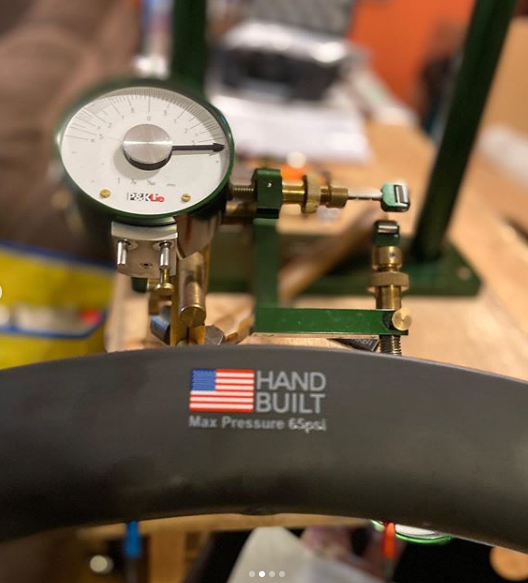 Unsurprisingly, Chabot taught himself how to wheelbuild. “I did because I’m Jerry and I’m an engineer. I’m the alpha engineer,” he chuckles, adding that, “wheelbuilding is a super process-focused thing and that’s what I’m good at." For NEXT wheels, that process is probably a little more in-depth than at your average bike shop. His goal is not just to create a round and true wheel, but to create evenly high tension in every spoke, and any wheelbuilder can tell you that takes a long time to achieve in a wheel. On the trail or on the road, that even tension means the wheel will stay round and true for longer and provide a super stiff and responsive feel, meaning the wheels will accelerate faster, and hold a line through rough terrain better. For a deeper dive into the importance of spoke tension, see what Chabot has to say here.

When Chabot builds each set, he wants to get to know his customer before he begins, to get a feel for what they intend to ride, and how that would affect his build. Spoke tension, count, and layout are all variables he can fine-tune to a rider. Once a set goes out to a customer, he values their feedback above all else, and that feedback process is yet again something that sets NEXT apart. “Big brands who crank out thousands of wheels a year never really hear from their customers again, but I really like the ability to chat with whoever rides the wheels and hear how I can make the wheels even better for their riding, and that’s something I never want to skip,” Chabot says. He will gladly take a wheelset back and adjust things to the rider's liking if it's not working out at first.

NEXT Wheels might not be a re-invention of the carbon bicycle wheel, and that’s totally okay by Chabot. He did not set out to flip the industry on its head, but rather he wanted to simply take engineering skills he was familiar with to create some of the best wheels in the industry for his friends and team. That quickly blossomed into a business selling two dozen different wheel models across MTB, road and CX, all at surprisingly affordable prices. We’re talking $1,795 for a pair of carbon wheels that will likely outlast your frame. If you’re in the market for some truly bespoke (pun intended) carbon wheels for your bike, give Chabot a call, you won’t regret it.

For anyone who has been following the EWS and pro downhill circuit, you’ve probably seen or heard the buzz around Fox’s brand-new suspension bits. After months of testing on the roughest tracks around the world, FOX released their new line of bike parts today, including a brand-new Float 38 fork, updated Float 36 and Float 40 forks, and two new Float X2 and DHX2 rear shocks. RELATED: Check Out Kurt Sorge in TGR's New MTB Film Accomplice We haven't been able to get out on any of the new parts