This past fall, Jimmy Chin and his wife and co-director Elizabeth Chai Vasarhelyi wowed the world with their film Free Solo, depicting Alex Honnold’s free solo ascent of El Capitan. The film blew our collective minds, showing Honnold’s athletic and mental prowess as a climber (ripped abs and all). But, arguably even more impressive is the fact that Chin and an often-sizeable production crew were up there with Honnold as he climbed, rigging equipment and capturing the feat as it unfolded. It’s no secret than Chin is a world-class climber, skier, and mountain athlete (remember Meru?), but how does he maintain the same level of fitness as the subjects of his films? Over his many years of expeditions shooting in the world’s harshest conditions and constant traveling, Chin has developed a routine of nutrition, hydration, exercise, and rest that keeps him going at the top of his game.

We caught up with Chin in a rare moment of downtime during his currently hectic schedule internationally touring Free Solo. He shared some insight into his process, and notes that it truly comes down to discipline. If you haven’t yet watched Free Solo, we suggest you do. It’s currently out in IMAX.

TGR: Jimmy, we live in a world where there seem to be new diet and nutrition fads day in and day out, how do you sift through the BS and figure out what can truly help you perform as an athlete?

Jimmy Chin: I think the most important thing is figuring out where the ingredients in your food come from. Knowing how and where it’s farmed or gathered is crucial. You don’t know where anything comes from these days. There are a lot of supplements out there that have heavy metals in them, because of where they’re farmed. If you’re going to take supplements or natural homeopathic herbs to benefit your health, it’d be nice if it wasn’t actually bad for you! 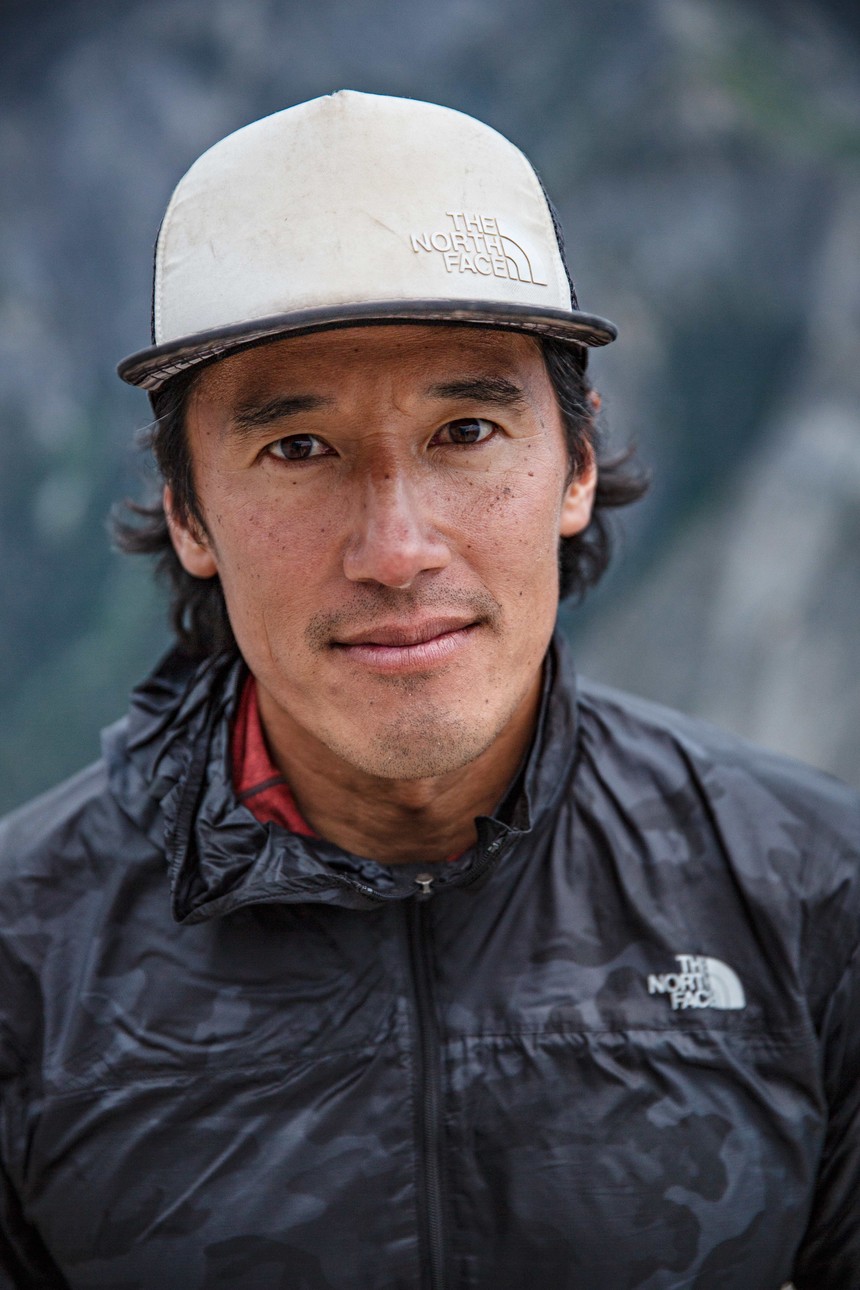 Jimmy Chin, stoked to be on top safely with the shoot in the bag. National Geographic/Samuel Crossley photo.

I usually deep dive into those areas when it comes to supplements I’m taking just to make sure that they have the best and purest ingredients I’m putting into my body. I take supplements from HANAH like HANAH ONE . I know where it’s sourced, and the company is accountable for its ingredients. They came into existence because that is truly their mission. I stick with ayurvedic supplements, which are actually unfortunately the most susceptible to being contaminated with heavy metals and being marketed as something that they aren’t. That contamination can happen because these herbs are often farmed in previously industrial zones. Farmed herbs are also often not as efficacious simply due to the fact that they are farmed. They take a lot of nutrients out of the soil, especially when the same ground is farmed over and over again. So, having wild herbs is certainly way better.

I’m usually traveling a ton, which often means no routine and very little sleep, so it’s nice to have a few things that I do take consistently. Some people expect an overnight experience when it comes to supplements, and some do work that way, but many need to build up effects in your body, so having a routine to taking them is important. Plus, it gives some routine to the rest of my life too. HANAH is great for crazy production schedules because it evens out my energy and it helps to keep me focused and healthy. 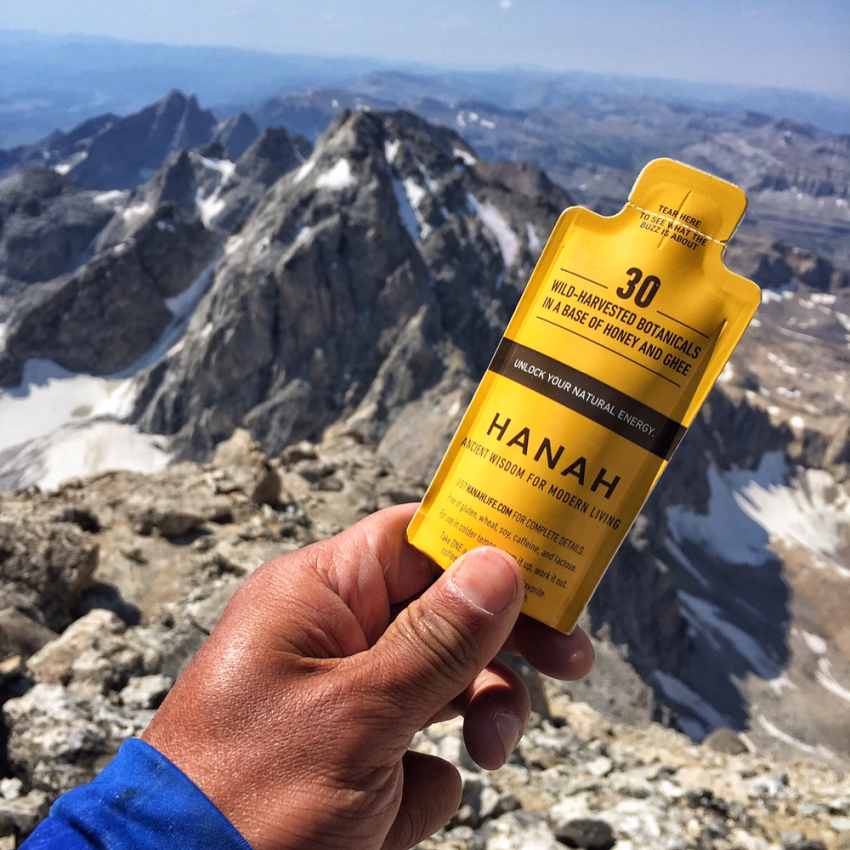 TGR: When did you start taking nutrition and overall wellbeing seriously in your career?

JC: I think it truly started when began going on expeditions, as early as 1999, so it’s been a long time coming. On expeditions you have to be really specific about what you’re bringing on trips and have to make some real decisions. Just like how we’re very conscious about our skis and bindings for a ski trip where it’s remote and you’re really depending on the gear, and it’s the same with food and nutrition.

I’ve been doing it for a long time, but somewhere in the last 10 years I realized that if I’m going to bring this food or this supplement it needs to perform. 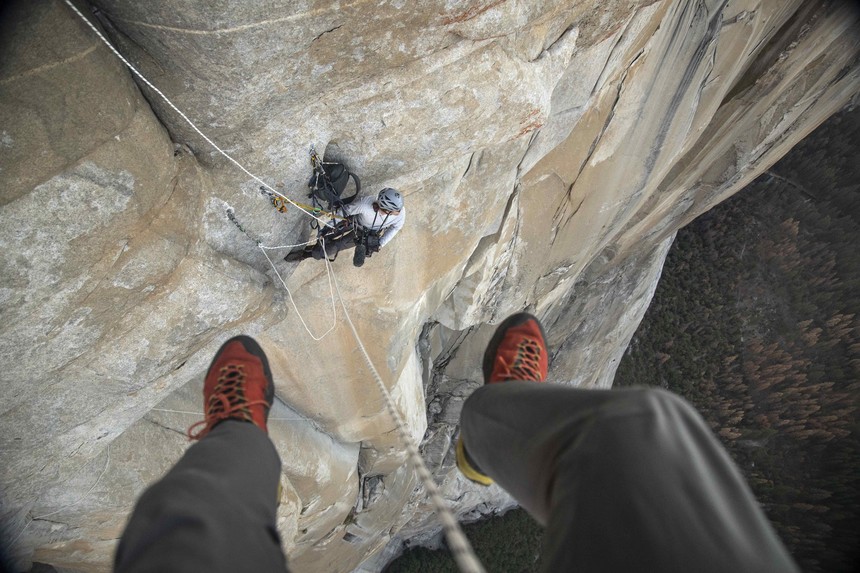 Not a bad view from the office. Jimmy Chin photo.

TGR: What kind of other things have you tried?

JC: Over the course of the years, I’ve tried a lot of different things, but the focus for long days in the mountains is high-protein foods and good fats like olive oil.

TGR: For Free Solo, you faced some pretty gnarly work days, moving and rigging gear on one of the biggest cliffs in the world. How did you keep up with your routine and stay strong throughout production?

JC: I was definitely moving around a lot and putting in really long days with little sleep, so you need to stay healthy. Free Solo was a really physical production, we were moving a lot of big loads in the vertical realm day in and day out. Getting to location and rigging day after day was pretty intensive, but we got really strong on that production!

For me, the basis of being able to function well in the mountains is having your food and water and staying hydrated and dialed on all that. 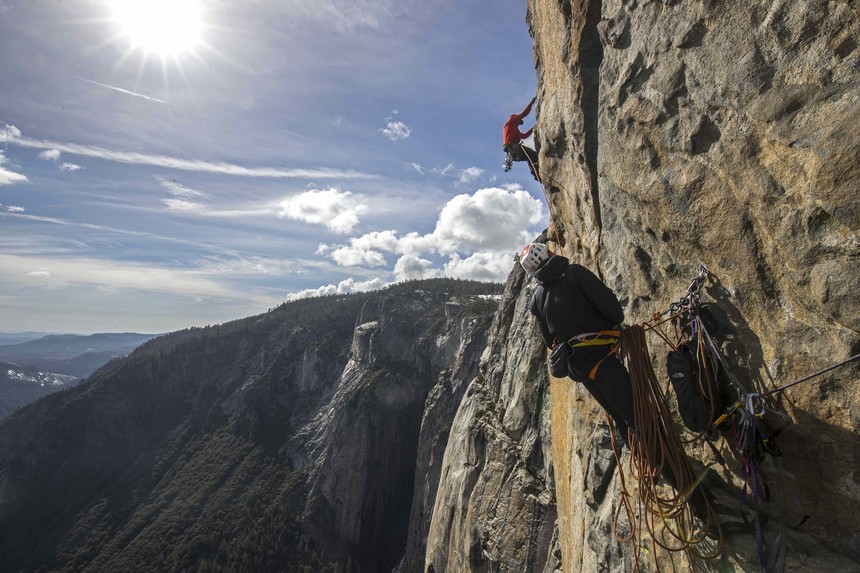 TGR: Do you have any advice or tricks for those of us who want to stay on top of our game even with relentless schedules?

JC: It’s really all about discipline. We’ve been on this film tour for five months now, and every city Alex and I go to, we carve out some time to spend a few hours a day at the climbing gym. We train in our hotel rooms and in the gym and in the green room doing stuff, it’s funny. We also have so much energy to burn, since we’re both used to spending big days in the mountains. We stay pretty healthy, even given that we’re flying three to five times a week. You just have to stay motivated.

The biggest thing is really staying motivated, but that’s not that hard for me. I know that staying strong helps me go ski or will help if I get called up to go climbing on a shoot. I want to go skiing or climbing with my friends, so it’s always not just for the sake of training, for actually always for me, still inspired and motivated by the thing that’s always been the inspiration and motivation: actually getting out there. That hasn’t changed ever.

I want to be able to go home to Jackson and do top to bottom Tram laps without even thinking about it or getting up in the Tetons and not getting completely crushed. I’ve only had two weeks out of the whole year so far skiing, which is brutal, but then again, this film is well worth it. It’s not even a complaint because everything that’s happened is awesome and we're really happen with how it’s rolling out.

IT'S TIME It all starts now – the 22/23 Ikon Pass is on sale. It's time to keep the stoke alive, seek a season of fun in the mountains, and DO across 50 of the best ski destinations in the world. When you claim this multi-destination pass, you're dropping into a celebration of snowfall. Whether it's the immediate spring access, hooting and hollering down your favorite runs next season, or connecting with the crew for an afternoon brew, there's always an adventure for how you ride.

After a bit of a hiatus, snow has returned to Jackson! | Nic Alegre photo. If time on snow is the barometer of success for your winter, Jackson Hole has been the place to be. As TGR co-founder Todd Jones says, "Lift lines haven't been this short since the 90’s." Now that Miracle March is well underway, snow and music is on the menu for closing out the season in style. In preparation for the upcoming Rendezvous Fest spring music festival with guitar hero Ben Harper, The Wailers, Fitz and