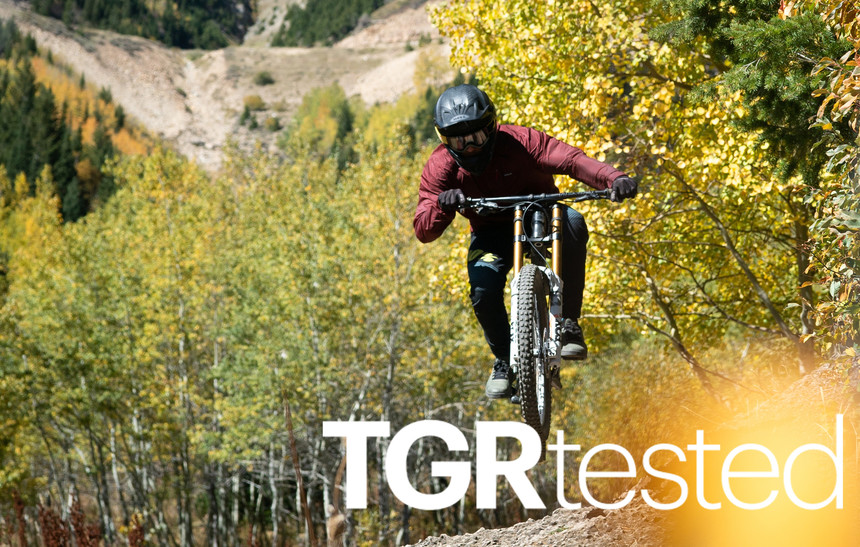 Fox's Float 40 fork and Float X2 shock have won race after race on the World Cup circuit - so it's no surprise they'll make your downhill bike feel better than ever before. Charlotte Percle photo.

Let me say this up front: I am not a high-level downhill racer. But…spending time on a dual crown bike might be the best thing that’s ever happened to my riding. In case you didn’t know yet, most of us at TGR live at the foot of the Tetons, and our riding here can get pretty rowdy – we’ve got some of the best open-to-the-public freeride trails found anywhere. So, riding a DH bike in our parts isn’t just about racing the clock on a closed course, it’s about rallying steep, raw trails littered with jumps, drops, and other fun things. In fact, those trails might be the ultimate testing ground for anything downhill bike-related given how much different terrain gets crammed into a few miles of trail. This summer provided plenty of opportunity to test Fox’s 2021 Float 40 fork and Float X2 shock, and unsurprisingly, I was impressed by the difference it made on the bike.

Sure, these suspension bits are designed for World Cup level racers pushing their paces into unheard of territory, but the tunability, plushness and reliability can be enjoyed by anyone dropping into gnarly terrain on a DH sled. If you regularly compete at the highest level, you’ll probably already appreciate the technology inside of these two masterpieces of engineering, but hear me out: if you own a dual-crown bike and just aren’t happy with how your current suspension feels, Fox’s 2021 offerings will make your bike feel not just brand new, but likely better than you could ever imagine. 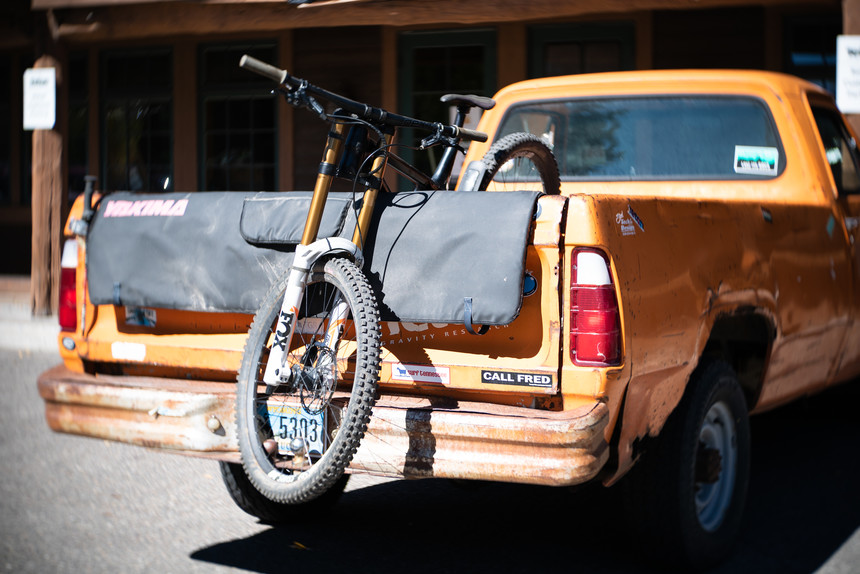 Whether it's shuttle laps or winning races, the 40 and X2 will support you every step of the way. Charlotte Percle photo.

I tested the Factory version of both the Float 40 and the Float X2 aboard an alloy Canyon Sender. The bike originally came with coil-sprung suspension both front and back, but I simply could never get it to feel good. Sure, coil springs are supple off the top end, but without a proper adjustable damper, they’ll only feel good in certain conditions. That’s exactly where Fox comes in –  I’ve already talked about the Float air spring and the GRIP 2 damper when testing the Float 38 earlier this season, and that same adjustability is available for the back of the bike in the damper of the X2.

If you’ve ever watched any sort of downhill racing, you’ll recognize the Fox 40. With massive Kashima-gold stanchions, and all manner of colorful lowers, these things have won race after race for the past decade. For 2021, the 40 got a complete ground-up redesign featuring new lowers, new crowns, and more adjustability than ever before. In a nutshell, this thing is designed to go even faster than before by providing a more comfortable and supportive ride as you push hard through gnarly sections of trail.

Let’s talk about the chassis first. The 40 has always been a stiff fork, and with the new 2021 lowers, it gets even stiffer. Is that a good thing? Sort of, but mostly yeah. With a new arch design, the fork gets increased fore-aft stiffness, as well as smidge more torsionally stiff. Compared to last year’s 40, it’s honestly not that noticeable by the average rider, but if your name is Aaron Gwin, I bet you would. When it comes to getting traction where it counts, the 40 has your back. Charlotte Percle photo.

Secondly, the new floating axle found across all the new Fox forks makes the fork much smoother through its stroke. Aligning fork legs might seem like a no-brainer, but with hub width tolerances never actually that exact, making sure the left and right fork leg are actually perfectly straight is now a piece of cake. The floating axle has the ability to match the exact width of the fork’s wheel mounting surface precisely to the front hub flange spacing, creating perfect alignment and eliminating nasty friction between the upper and lower fork legs. Put in laymen’s terms, imagine a tube moving into another tube of slightly wider diameter. If it comes in at any sort of angle, it will bind and not move freely. If it goes in perfectly straight, it moves freely. That’s exactly what’s happening here.

Now that we’ve talked about the chassis, what’s inside each fork leg? On the damper side, Fox specs an updated GRIP2 damper, which features high and low speed rebound and compression adjustment. On the spring side, we find an updated EVOL air spring, tunable with volume spacers. Neither of those are new designs, but they have been updated to fit the new fork and offer better sensitivity and damping than ever before. Read more about the GRIP 2 damper in  TGR’s review of the Float 38.

Like the 40, Fox’s X2 shocks got a ground-up redesign for 2021. Both the coil-sprung DHX2 and air-sprung Float X2 got a new chassis and damper, giving better control over settings and a better feel on the track. Taking cues from the Grip 2 damper, the X2 offers the ability to fine-tune high and low speed compression and rebound externally. The air spring also has easily adjustable volume spacers that allow you to add or remove progression to prevent bottom out. A climb switch is available for both DHX2 and X2 shocks for those of you wanting to put this shock on a bike for pedaling. 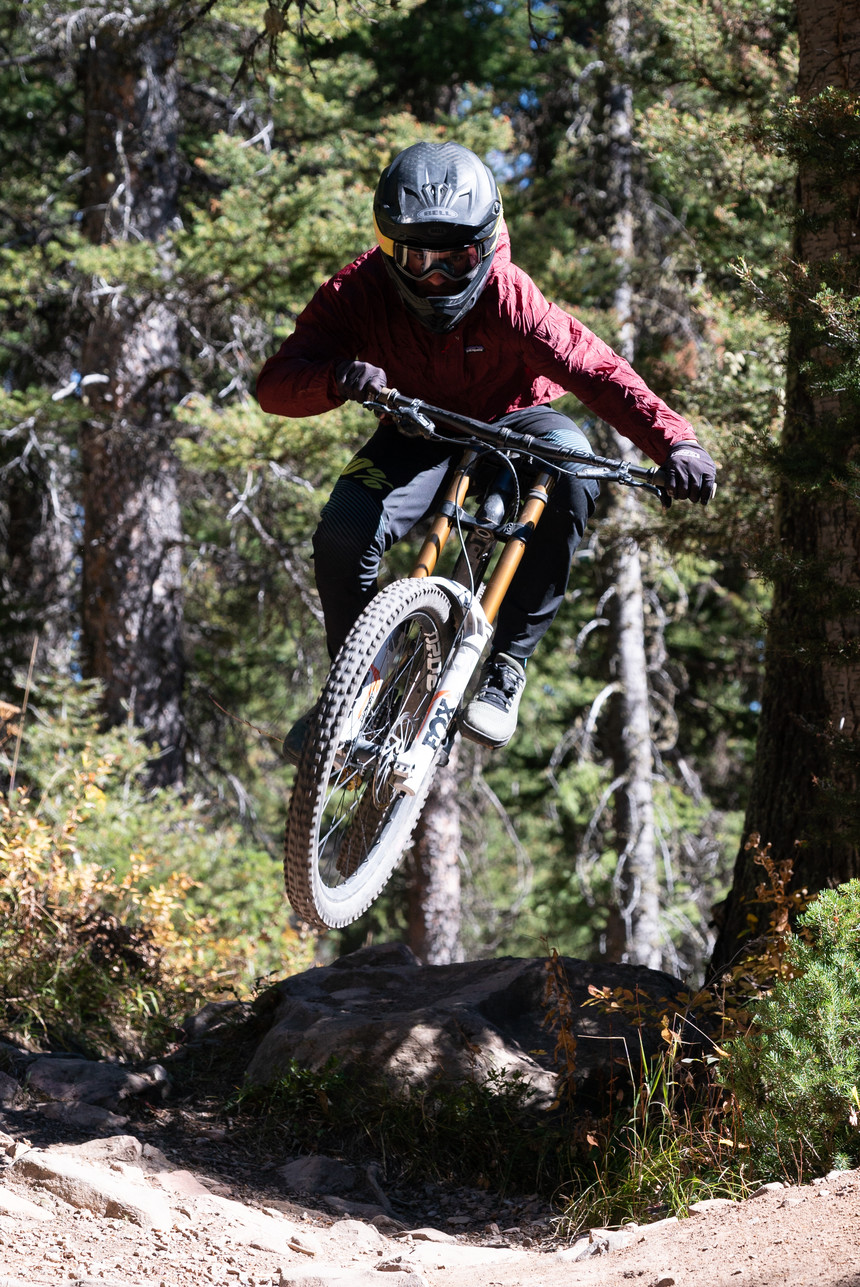 What good is riding a DH bike if it doesn't leave the ground?  Charlotte Percle photo.

So How Do They Ride?

I like to think of a mountain bike as the sum of its parts, especially when it comes to suspension. Being able to test both the 40 and X2 together truly allowed each product to shine. They were designed to be used together, after all, so that’s what we did.

Setting up both fork and shock takes a little while, but that’s part of the fun. Setting up stuff in different ways is the best way to get familiar with how these settings work, what they do, and how they affect the ride of your mountain bike. For a baseline setting, I took my GRIP 2 compression adjustments from the 38 I had been testing earlier this summer, and those translated quite well. Rebound is more specific to air pressure, so I took Fox’s recommended settings for my spring rate and tweaked those ever so slightly. On the shock, I also followed Fox’s guidelines for baseline settings, but ultimately changed them to speed up both HSR and LSR, and added a few extra clicks of LSC damping to keep the bike a little more supportive. 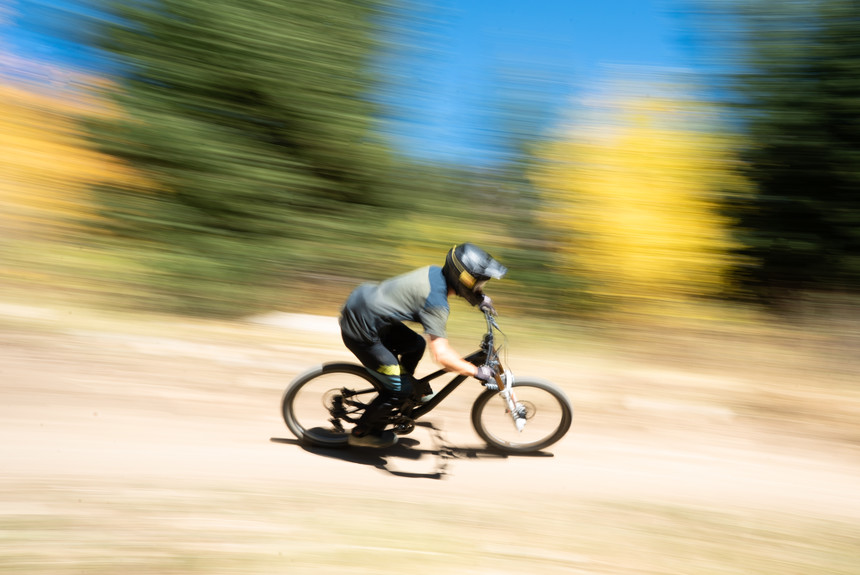 At speed, the fork and shock feel smooth and supportive, eating up all kinds of trail chatter. Charlotte Percle photo.

The adjustability of the GRIP 2 and X2 dampers is a huge asset. Yes, it gives riders the chance to mess around depending on track conditions. But if anything, being able to independently adjust low and high speed compression and rebound gives me what I call “huck-to-gnar” compatibility – that is, the ability to be both poppy and responsive (huck) as well as super damped to give traction (in the gnar). On a downhill bike, that gives me the confidence to pop off trail features where the landing (or lack thereof) would clearly suggest otherwise, like into a rock garden or off-camber roots. For an even better explanation of this, check out Lost Co.’s setup guide for the GRIP 2 damper below.

Once set up, it was time to rally the fork on all manner of downhill trails in our local area, as well as testing it at the Silver Mountain, Tamarack, Jackson Hole, and Grand Targhee bike parks. If you got the chance to ride any bike parks this summer, you might have noticed that the incredibly dry summer coupled with lack of trail maintenance made trails a minefield of brake bumps and impact craters. Riding a DH bike equipped with Fox’s suspension made it possible to push hard on those faint memories of trails without having to stop mid-lap because your body felt like it was getting rattled to bits. No really, 20-minute 3,500-foot top to bottom laps at Silver Mountain were all I rode for three days straight because I just couldn’t get enough of it. Sure, these things obviously perform well enough to be attached to pro bikes, but for us mere mortals, they kill fatigue and keep your bike super-glued to the ground.

The combo of the Float 40 and Float X2 will turn your downhill bike into an even faster rocketship, providing so much traction on rough trails and corners that you will almost certainly shave seconds off your times on descents you didn’t think you could go any faster on. Your bike will feel much more composed and planted, yet responsive to any input you give it to change direction, pop, or press through sections of trail. The best part? If conditions change, say from super dusty and loose to perfectly tacky hero dirt, dialing in the fork and shock takes a single tool and a few quick turns of a dial, thanks to the easy adjustability of the dampers. While certainly not an "entry-level" set of components, just about any downhill rider would appreciate the performance - and if you're looking for that extra edge when going hard and fast, look no further. 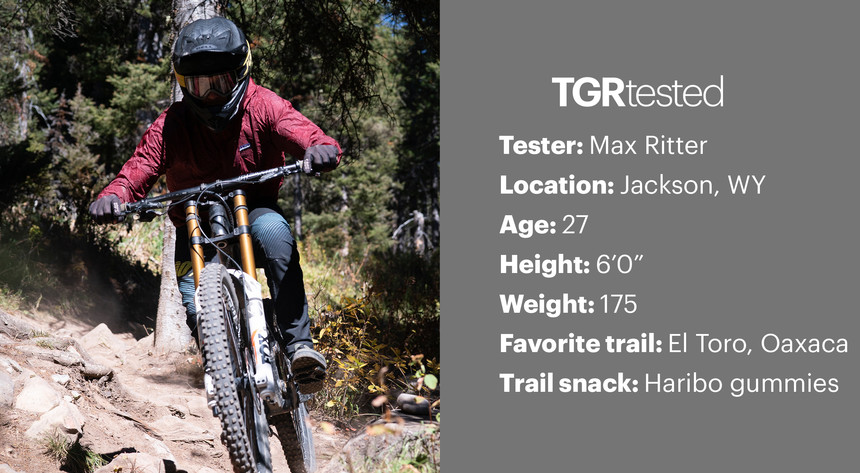 I always visit this site to read the travel diaries of many people. They are explaining their experiences in a detailed manner. Some are planning to make short films about it. These make us know how entertaining it is. http://getrheumatology.com Nice blog.