Teton Gravity Research is excited to announce the world premiere dates and locations for our newest film Andy Irons: Kissed by God. This film has been a labor of love for TGR, and we hope to see you at one of our three world premiere locations.

In the beginning of May, TGR will be premiering  Andy Irons: Kissed by God in Los Angeles, Honolulu, and New York City. These events will include friends and family of Andy Irons. A limited amount of tickets will be available via giveaways to the general public through TGR and some select partners. 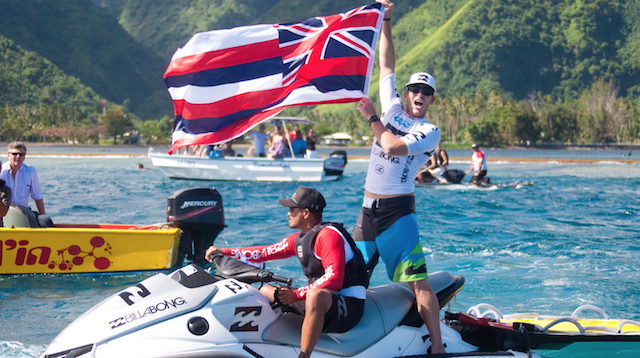 The People's Champion in his element. Brian Bielmann photo.

The film will debut to the world on Wednesday, May 2nd at the Regency Theater Westwood Village in Los Angeles, followed by Honolulu, where it will be shown at the Hawaiian Theater Center on Sunday, May 6th. It will then have its Manhattan premiere on Thursday, May 10th at the Skirball Theater.

Sign-up above and follow TGR on social media for more information on how to win free tickets to the exclusive world premiere in Los Angeles. Ticket giveaways start on April 17th.  More details on our upcoming North American theatrical release and tour will be released on April 30th. International release details will be made public in early summer.

Lastly, and most importantly, TGR wants to extend a sincere thank you to the Irons family, as well as Andy's friends and fellow competitors, for allowing us unprecedented levels of access to really explore the depths of the late champion's life and his struggles with bipolar disorder and opioid addiction.

Being one of the greats comes at a cost. It’s clear Kai Lenny is one of the best when it comes to riding giant waves like Jaws, but that doesn’t mean he’s perfect. Ever wonder what it’s like to wipe out in one of the biggest waves in the world? A few days ago, Kai did just that…a few times, and his board-mounted POV camera recorded the whole thing. Lucky for him, he got a few barrels in between the carnage too, though it seems he did end up with a nasty

Tom Curren is no longer searching for the perfect wave because he's already surfed it. So, when the COVID-19 pandemic came around, what more was there left for Curren to do except pack up his boards, grab a couple friends and just go surfing? Rip Curl follows the quirky journey of Curren and his crew as they head to warmer waters for some good old fashioned surfing. also takes a quick detour to teach us about plants that can survive in arid climates. Really, the film hits all the bases of any

There's a lot to be said for doing things alone, and doing them happily. For surfer Pete Devries, a solo day out on the waves is just what he likes. No stranger to cold water, Vancouver Island provides a pretty perfect haven for Devries and his buddy Jeremy Koreski. While Devries may refer to himself as a "happy recluse," he and Koreski make a solid pair when it comes to getting the perfect shot of the perfect wave. In their new short film with Arc'teryx, Devries talks about what it is that