Last season Jeremy Jones, Robyn Van Gyn, and Mark Carter ventured deep into Montana's Crazy Mountains on a multi-day, foot-powered snowboarding expedition. In this brand new short film, take a deeper look at the mission that was originally showcased in the 2018 film Far Out.

Trip photographer Ben Gavelda penned his perspective in the 2018/19 issue of  Jackson Hole Snowboarder Magazine, a legendary independent shred publication based in Jackson, Wyoming. See his original words & images below.


The sound of flapping nylon follows the rhythm of howling wind gusts. A continuous blast piles snow around the littering of tents, slowly constricting them as the storm pushes through the night. A spring squall in the Crazy Mountains of southwestern Montana is delivering.

It’s late April and far out in an island mountain range high above the plains, a crew of 10 is camped out. They’re exploring this lesser known range. When and where to ride will be the new challenge when the storm ceases. Sensitive snowpack and private property confine their exploration. Yet this range is rich with lines and the crew is in it for the long haul.

The trip was born from the mind of pro-snowboarder Jeremy Jones, who roped in fellow riders Wyoming’s Mark Carter, Canadian Robin Van Gyn and a Teton Gravity Research production crew. Aside from a little snowmobile support haul in camp, the trip is foot-powered. For Jones, taking this extended camp out method in the spring is all about exploring new areas with a safer, slower approach.

“To be in mountains I have never seen before continues to really excite me,” he said, marveling over the conditions the crew enjoyed after the storm. On such foot-powered trips, “stability with good snow is something very rare and special, especially in this range.”

Considered an island of mountains, The Crazies are a lonesome mass of rock surrounded by a sea of plains. They span nearly 600 square miles. At lower altitudes, they contain thick forest and lush drainages. Up high, steep, jagged peaks top out at the 11,214-foot Crazy Peak. Their isolated position leaves them prone to strong winds, which often grate away snowpack. However, this past season they’d seen record snowfall. Their namesake comes with interesting lore, too. 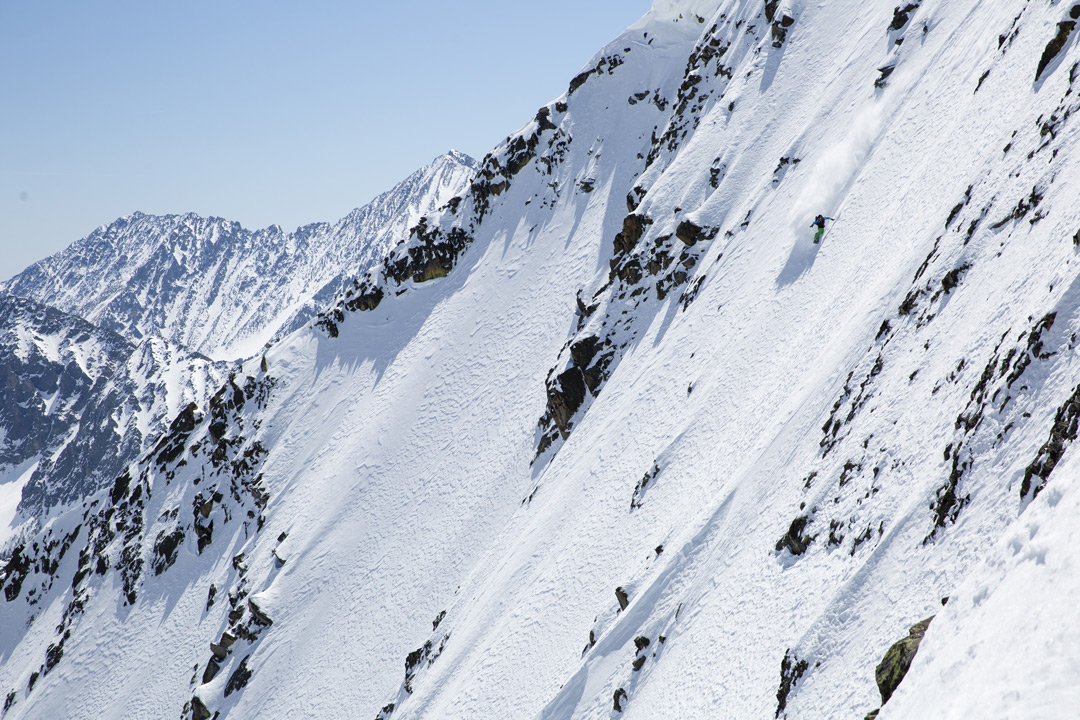 The Crazies are often referred to as an island range: a pocket of wild peaks with flat prarie on all sides. They have become a flash-point in the battle over land-use and access in the West. Photo: Ben Gavelda

According to Rick and Susie Graetz of University of Montana’s Department of Geography, one such tale involved Native Americans who attacked a wagon train of white settlers coming through the Mussellshell Valley. “A woman’s family was killed, and it is said, she ran into the mountains to haunt the tribe. Another has it that a woman settler was separated from her wagontrain and wandered into these peaks. People thought that she couldn’t survive without going mad, so the range was dubbed the ‘Crazy Woman Mountains.’”

Another tale, free from colonialist undertones, stems from the Native American Crow people who called the range Awaxaawapìa Pìa (Ominous Mountains). They believed the mountains had metaphysical powers and remained unpredictable. The Crow also believed in the mountain’s spiritual significance and travelled into them for vision quests.

When it comes to the mountains, not everyone sees them in the same light. For some, they’re the most magnetizing playgrounds on the planet. Others simply like to look at them from a safe distance. Then there are the few who want to capture and own them. The latter is a touchy, complicated subject here in the Crazies. Shrinking public lands and lethal private property rights are indeed alarming naturalists and recreationists alike. But perhaps stranger than America’s battle to protect public lands are its public land islands. These areas are swaths of public land circled by private property with little to no access to the communal terra. Montana has a lot of them and the Crazies fall somewhat into that category. 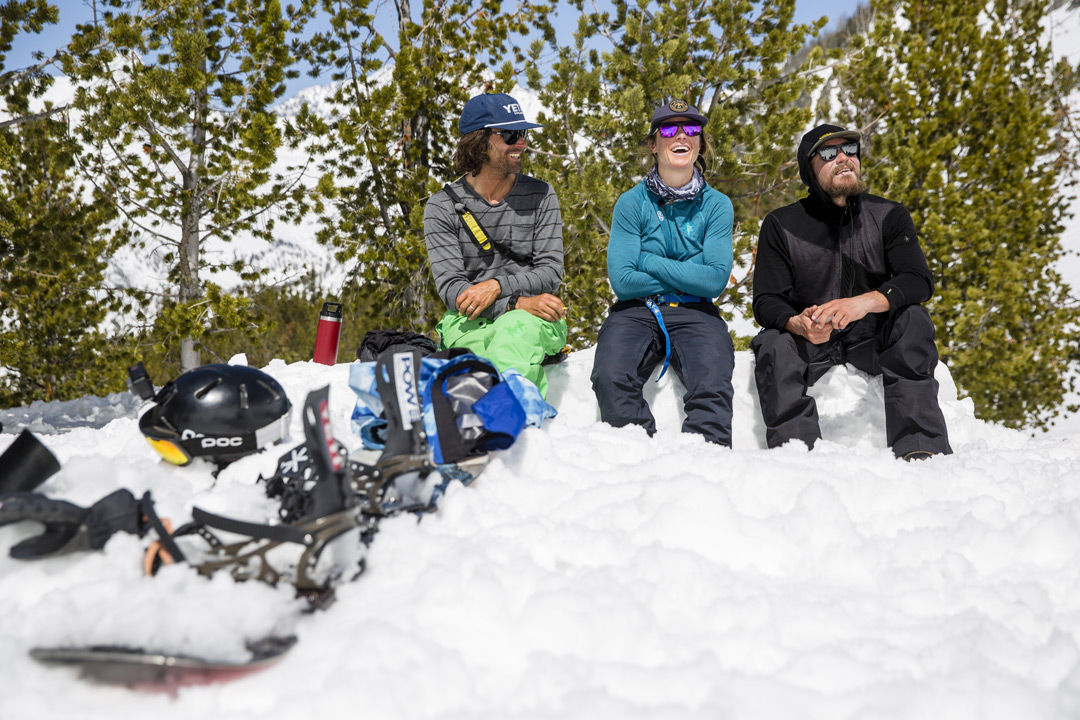 “I had no idea it was such a checkerboard of private land,” Jones said. “I guess it is somewhat common in Montana. But California, Nevada, and Wyoming, where I have done most of my snowboarding—the mountains are pretty much open to anyone.”

Early land use in the Crazies boils down to this brief. When settlers spread westward the federal government incentivized railroad expansion by offering every other mile for free. This created a checkerboard of land ownership. Lands that were not later wrapped into national forests were sold off and many became private ranches. Although there are a handful of public routes, these private tracts guard a good amount of pristine forest, even a few select mountains.

“I have never had a situation like this, where I looked at a pristine mountain deep in the wilderness and was told we should not go there because it is private property and the owner may come after us,” Jones said.

In the end, the crew was not deterred. They camped for 10 days and rode two to three peaks or lines a day, legitimately on public land. And there were countless other ones Jones wished he had time to ride. 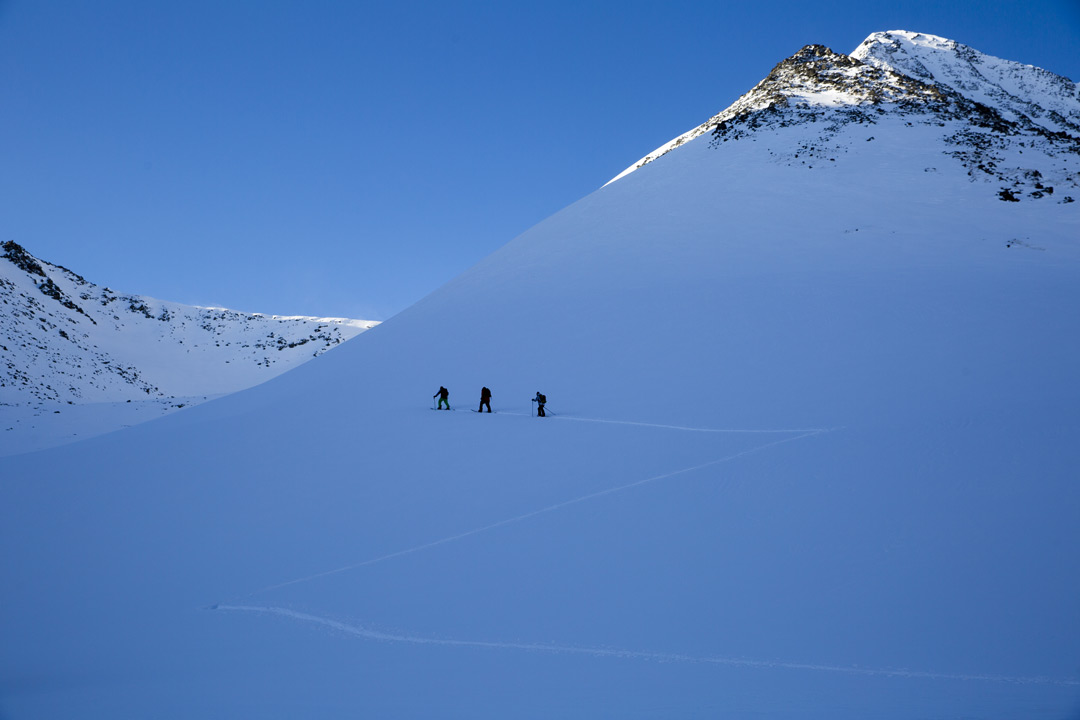 The potent and packed terrain made for quick ups and downs rather than long approaches. Long lit spring days aided the riding, too. “To be able to live in the heart of the range for as long as we did was unique,” Jones said. Because everything is close together, it is easy to hike and ride multiple peaks in a day, Jones added. The range is full of tightly stacked, steep lines of size and variety.

Capable and committed, the group’s pursuit and perception grew each day. It came with sunsets burning over layered ridges of the Absarokas to the south and calm, clear cobalt nights as the moon glowed off the glazed white grounds. Sprays of fresh snow briefly blurred their sights. Memories were logged of knife ridges, lake basins, bowls, couloirs, un-navigable rock walls and long powder lanes. Minds and bellies were filled with laughter, tales and camaraderie. Pale blue shitbags were filled to the brim at a pace of 10 a day. Bodies were worn, ground by sun and snow. Living among the mountains in winter, even with elite gear, is tough.

Yet it’s a life that inspires. Existing in wilderness shows who’s in charge all the time. In the end, we don’t own this land or its mountains and never will. It owns us.

For many of us, quarantine life revolved around not much more than hanging out on the couch inside, but for a lucky few athletes living in Sweden, it was a chance to try new things on uncrowded slopes. Sven Thorgren, Swedish slopestyle machine and six-time X Games Medalist, decided it was time to try a new trick – a Triple Chuck Flip off a massive hip at Riksgransen. RELATED: It's June and the French Are Still Skiing Big Lines in Chamonix WTF exactly is a Chuck flip, you may ask? Well we did

Remember back in February, when the world was still “normal” and international leisure travel was still a thing? Well, knowing that might still be a long way off for most of the world, here’s a look back at a trip to Norway’s Lofoten Islands by a crew of Italian freeriders. In case you’re unfamiliar, Lofoten is home to some of the most unique ski and snowboard lines in the world, with countless powder-filled couloirs stretching all the way to the ocean just begging to ridden. RELATED:

The Jackson brothers are some of snowboarding’s most adventurous riders, hunting lines in faraway places around the globe. So it’s no surprise that some Viking lore brought them to Iceland to explore what the nation has to offer in terms of raw natural beauty and plenty of space to let loose in the mountains. RELATED: Check out TGR's Accomplice on Tour NOW Black Diamond’s latest short film shows off John and Eric Jackson’s dream trip to Iceland, made possible by Eleven Experience and guide