Is there ever too much of a good thing? Mark Carter would argue no, at least when it comes to being in Jackson, Wyoming for the winter. He’s been snowboarding in these mountains since 2002 and doesn’t plan to stop anytime soon. Sure, snowboarding has been a way for him to explore the world, but nothing seems to top his own backyard—especially when the conditions are off the charts. Aside from two quick trips to Europe, Mark was pretty much hunkered down in Wyoming all winter watching the snow pile up outside his window. The nonstop snowstorms were great for face shots, but not necessarily for getting the shot. At times the heightened avalanche danger forced him, Robin Van Gyn, and the TGR production crew to tread lightly and know their limits in the backcountry. Thankfully, it was a successful winter, despite the risks.

Mark is now back in his summer home of Ten Sleep, Wyoming helping with the family business, Carter Country Meats. We caught up with the snowboarder to learn a little bit more about how the season went for him:

Jackson had one hell of a winter last year. How was the season for you?

Mark: It always seems like no matter how bad it is everywhere else if you’re willing to go search you can find something here in Jackson. Luckily we didn’t have to search very far—it was all-time conditions. It started out a little bit slower than usual, but man, when things turned on it was almost unmanageable at points. I spent a lot of days at the resort because the conditions were so dangerous. It was a historic February, so the most important thing during those storm events is to let someone else, like the incredible crew at Jackson Hole Mountain Resort, manage the snow conditions for you.

A lot of times snowmobiling, when we did have those sunny days—which were honestly few and far between—it made for a challenging time to film. That being said, it was a great winter to ride powder. 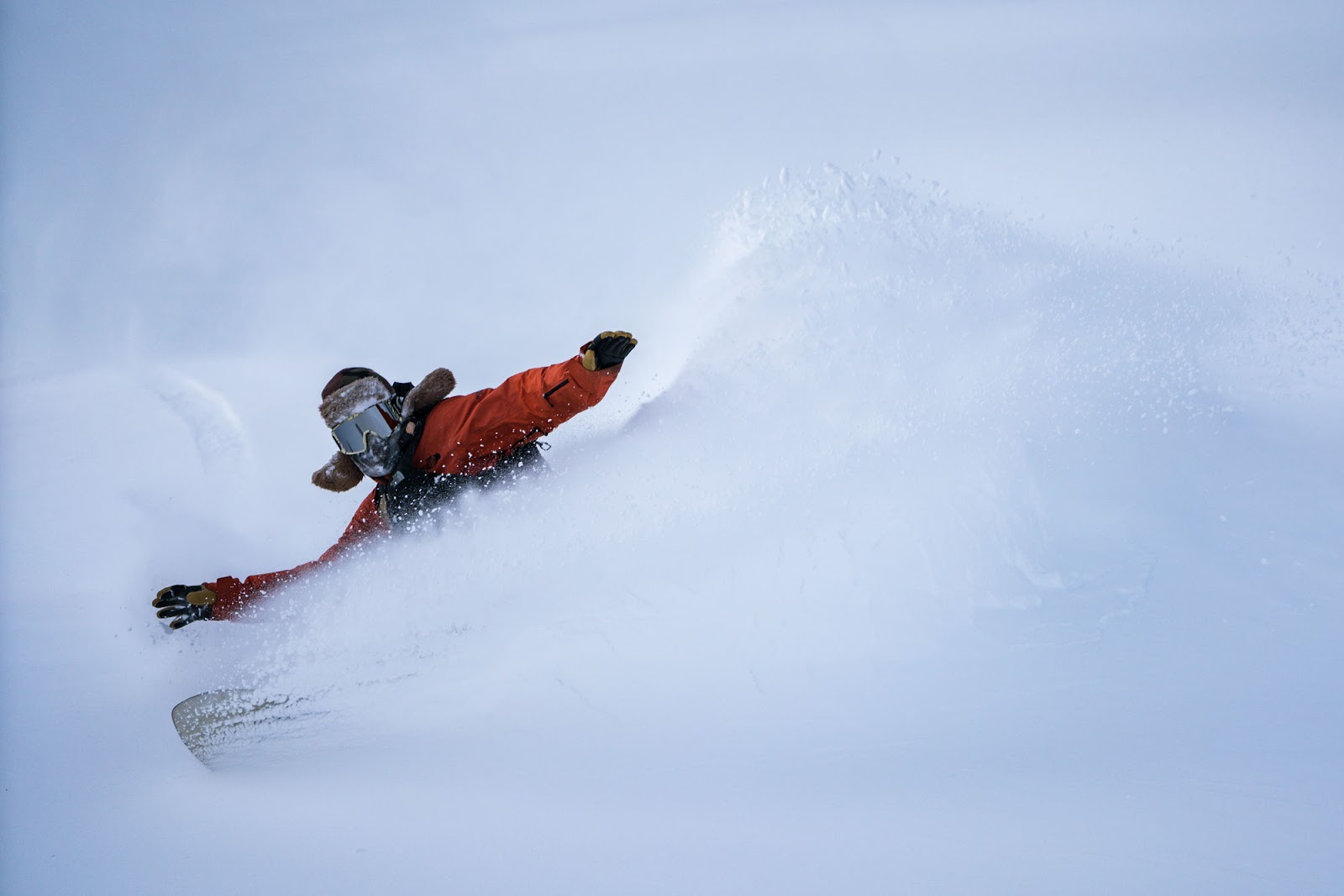 There was no shortage of fresh snow this winter. Jasper Gibson Photo.

So logistically, all this snow made it tougher to film a segment?

Mark: Yeah, it’s the reality you have to face with the kind of terrain we want to ride. I let mother nature dictate everything. I never try to force what she’s doing. What she’s given us is what I'll take. If there’s high avalanche danger we just don’t go in the backcountry. Honestly, when the avalanche danger is so high it’s an easy to call to make—you just back off and ride the resort. It just shows you how world-class JHMR is with the fact that they can mitigate the risk as well as they do.

That terrain at the resort is the best. Wheeew—that’s where I want to be. When I want to get away from the crowds then I’ll take my snowmobile out or go walk with my splitboard.

To film your segment did you tour or use sleds?

Mark: We used sleds for all the filming we did, which is a challenge on its own, but I prefer it.

You’ve been coming to Jackson since 2002. Is it your goal to find new zones or do you return to old favorites?

Mark: Typically the draw is to seek out new terrain and fresh stuff, but the great thing about Jackson is that the same terrain fills in differently year to year. It comes down to managing the snowpack and going to where you think it’s safe on top of getting that bug to explore. We have so many zones from the South to North that we can really monitor what’s happening and pick somewhere that will be productive and safe. 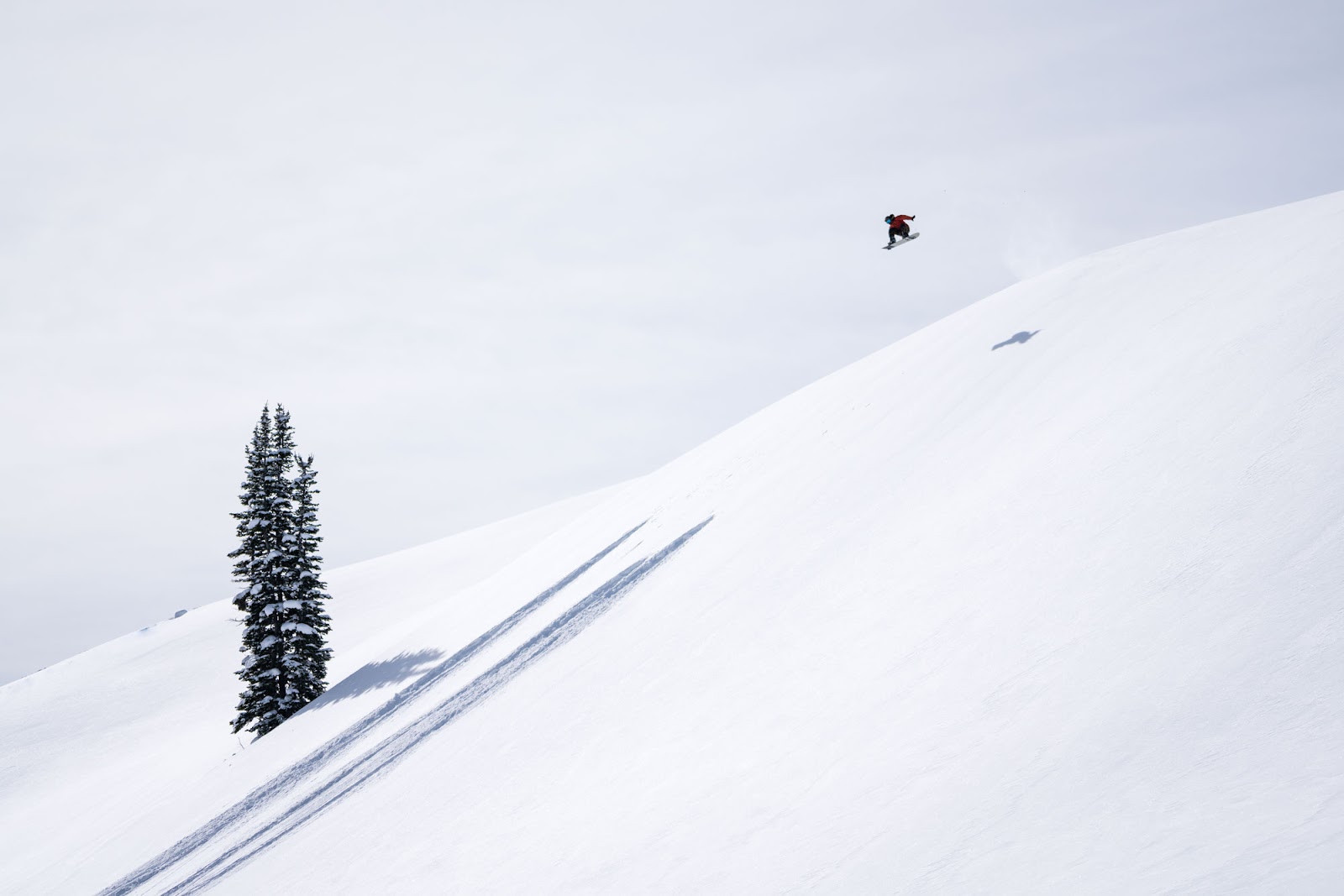 Once the conditions gave you the green light, was the team able to be productive?

Mark: Honestly, it always feels like at the end of the winter you’re never content with what you got. You always want to push yourself. But ultimately it was productive and I’m healthy, so that feels like a success in my book. It was great snow too. We shot early in the season so the light was beautiful. But like I said, early-season was tough because it was hard to get into the zones we wanted to charge into. Despite all the challenges, you persevere, chip away, and get it done.

Robin Van Gyn also joined you in Jackson, how long have you two been snowboarding together?

Mark: I just started snowboarding with Robin last year. The Crazies trip was the first time we snowboarded together and I already had a lot of respect for what she’s done because she’s a very powerful woman. She’s also a great person to be around. Robin knows her shit and is dialed when it comes to making decisions and that’s the kind of person I want with me in the backcountry. She’s just a charm to be around.

Did you spend your whole winter in Jackson?

Mark: I did two different trips to Europe this winter. I like to travel and Europe is absolutely amazing with the richness of their culture, the food, and terrain. But to be honest I really prefer to stay in Jackson when I can. When I’m here I can keep my finger on the pulse and watch the storms really closely. That’s my most productive way of working that I've found. Having a routine really goes a long way because when you’re in one place you can monitor the snowpack. Being in Europe I had no idea what was going on with their snow. You’re so misinformed that you have to tread lightly unless you’re with the locals or friends you really trust. There’s a lot of variables that go into making a productive snowboard segment. It’s a lot of work, but it’s good shit. 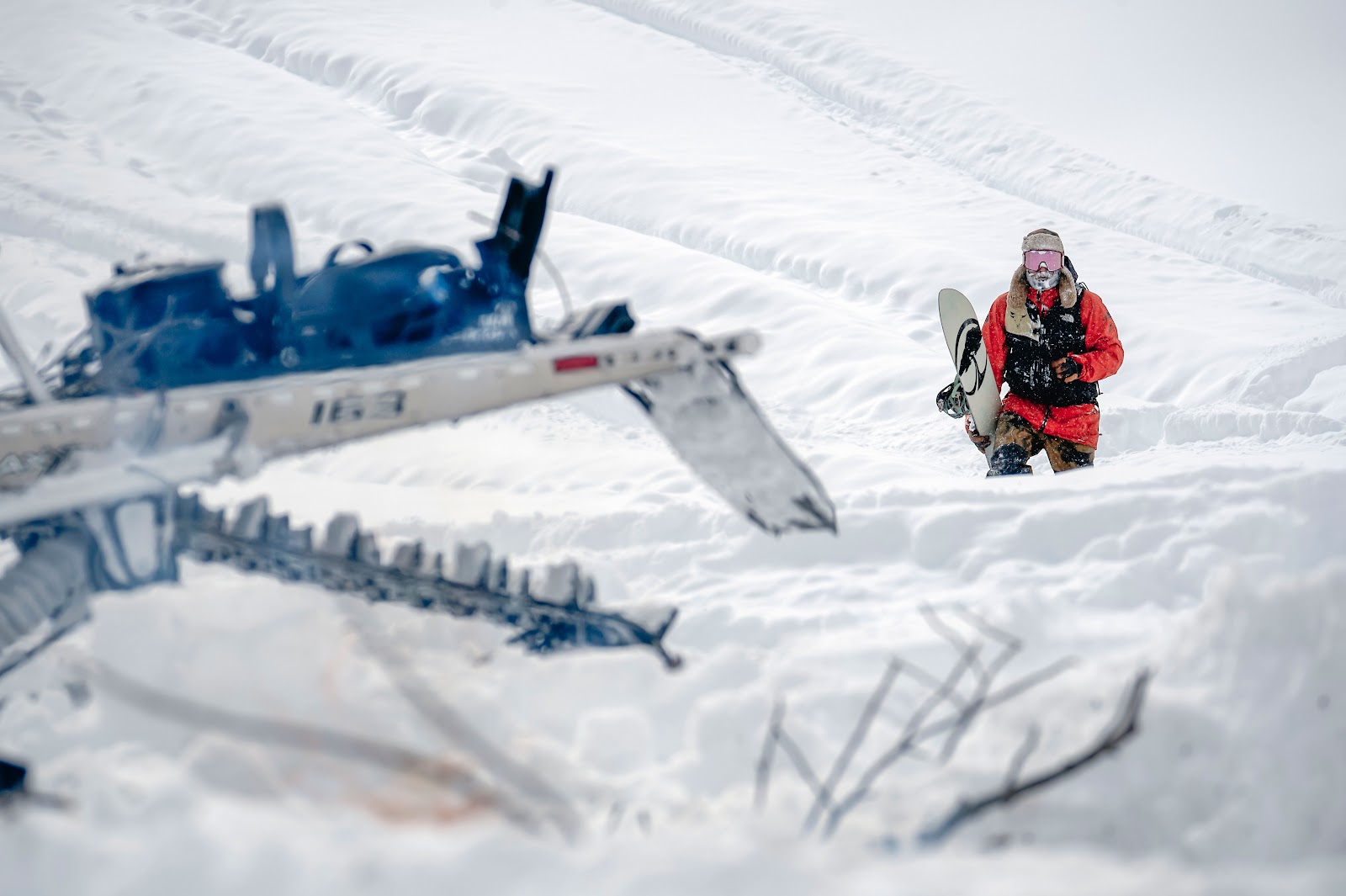 For Mark, having a sled in Jackson helped take his snowboarding to the next level. Nic Alegre Photo.

What keeps you coming back to Jackson?

Mark: I don’t have to leave Wyoming. I come back because I feel comfortable there. I’m a Wyoming boy and it allows me to be close to home and my family in Ten Sleep. The terrain. The snow. The people. I’ve built a little family in Jackson over the past 16 years and I think it’s a special place. As congested as it’s becoming you can still get away from the crowd if you’re willing to work for it.

Plus, it would take you a lifetime to really explore this place.

Mark: I’ve been riding the resort for so long and I’m still finding new stuff. When I first moved out here I worked for the park and pipe crew, so I only rode the Gondola and Apres Vous. I was scared to venture out at first. Now the whole mountain feels comfortable to me, but in the beginning, I was terrified.

But it’s hard to leave, you get stuck in the hole. Everyone is trying to come here, and you get desensitized when you’re in Jackson. There’s nothing normal about this place, we’re so lucky to be here. 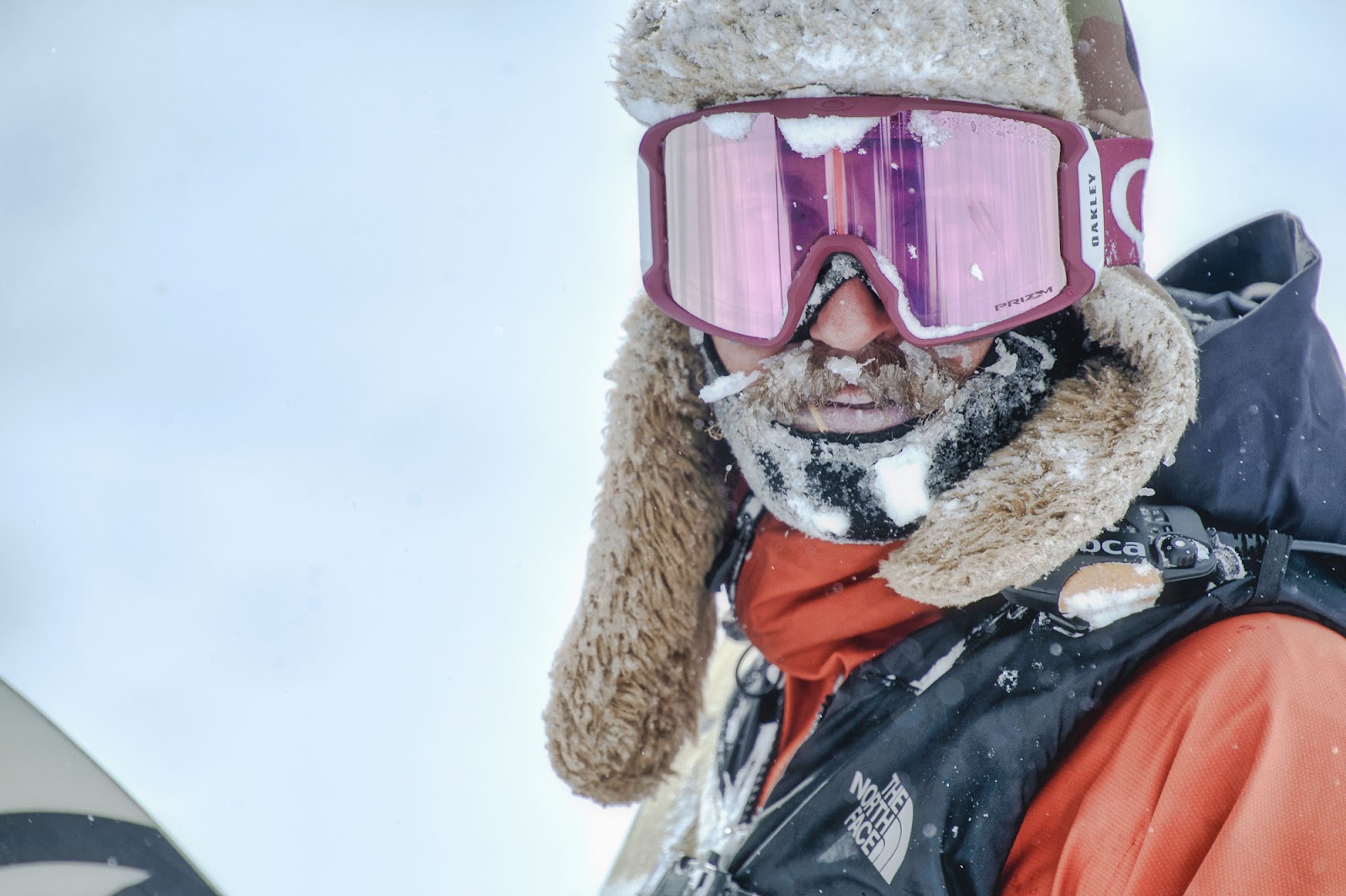 Mark was a cowboy working on the plains of Wyoming before he became a snowboarder. Now more than ever those humble roots are evident in his snowboarding career. Nic Alegre Photo.

Do you feel recharged after spending your summers back in Ten Sleep and working on the ranch?

Mark: Totally. I think that’s necessary for career longevity. Coming home and seeing how hard people work makes me appreciate the job I have as a snowboarder. People work really hard for nothing and that’s the day to day reality. There’s not a lot of vacation, and I feel like what I do is a permanent vacation. Sure it can be hard and dangerous at times, but those are just sacrifices I make to put my ass on the line. You really realize how hard the food producers work to produce their product and survive. It puts your priorities in check and it keeps me hungry with my snowboarding career. Nobody cares about the fact that I’m a professional snowboarder in Ten Sleep, which is awesome. I want to be regarded by my peers here in Ten Sleep for my work ethic and integrity, and I hope that crosses over to my snowboarding. It keeps me humble.

You started filming with TGR in 2006, that’s longer than just about anyone. How do you think your snowboarding/career has evolved since then?

Looking back, the easiest thing for me was to just be myself, and that’s when my career took off. I embraced my roots of being a rancher and stopped trying to be something I’m not.

helping others by sharing useful IT Infrastructure Management topics are really a good thig. it creates more people aware of various new and interesting topics very easily. The collection of such useful and relevant ideas makes the page really attractive for the readers to generate more ideas very easily

Different things drive us into the mountains. For some, it’s a desire to escape. For others, it’s a desire to explore and push the limits. For some though, it’s about connecting with themselves in a way nothing else can provide. For two Navy SEALs, an attempt to traverse the entirety of Colorado’s Sangre de Cristo Range was a moment of reflection and connection with two fallen friends. RELATED: First Descents in Chamonix Are As Gnarly As They Come After losing countless best friends in

For many of us, quarantine life revolved around not much more than hanging out on the couch inside, but for a lucky few athletes living in Sweden, it was a chance to try new things on uncrowded slopes. Sven Thorgren, Swedish slopestyle machine and six-time X Games Medalist, decided it was time to try a new trick – a Triple Chuck Flip off a massive hip at Riksgransen. RELATED: It's June and the French Are Still Skiing Big Lines in Chamonix WTF exactly is a Chuck flip, you may ask? Well we did

Remember back in February, when the world was still “normal” and international leisure travel was still a thing? Well, knowing that might still be a long way off for most of the world, here’s a look back at a trip to Norway’s Lofoten Islands by a crew of Italian freeriders. In case you’re unfamiliar, Lofoten is home to some of the most unique ski and snowboard lines in the world, with countless powder-filled couloirs stretching all the way to the ocean just begging to ridden. RELATED: