Every sport undergoes evolutions and progressions – for athletes, the simple act is pushing themselves and their peers is what keeps many of them in game for lengthy successful careers. In snowboarding, and action sports in general, that evolution and progression might be the single strongest driving force. After all, who’s keeping score in the mountains? Snowboarding in particular is a sport defined by (r)evolution – at first it was the counterculture against mainstream winter sports. Then, a handful of snowboarders took that a step further, in their own revolution, focused on human-powered riding in the backcountry. In its infancy, snowboarding had largely been focused on ski resorts, terrain parks, and using mechanized means like helicopters and snow machines to access the backcountry. Of course, that didn’t align with the exploratory adventure-seeking ideals of some riders, so they took matters into their own hands. In Episode 2 of Journey>Reward, presented by Sierra Nevada Brewing Company, Jeremy Jones and Selema Masekela chat about the changing tides in snowboarding. Catch the full series here.

Pioneered by legends like Jim Zellers, Tom Burt, Marco Sifreddi, Stephen Koch, Doug Stoop and more in the 1990s, the act of taking snowboarding into the world’s harshest environments is truly a story of multiple generations. That first generation was responsible for opening the doors into the world of big-mountain riding, first combining technical mountaineering with snowboarding. With wild descents all over the world (Sifreddi is credited with the first snowboard descent of Mount Everest via the Norton Couloir in 2001, while Koch was the first the snowboard all of the Seven Summits), these visionaries figured out how to move and operate in these environments with equipment that would make most contemporary riders cringe. Despite that, the allure of the unknown and the never-ending draw to adventure kept them going.

These godfathers of big-mountain exploratory riding planted the seeds that the next generation of riders like Jeremy Jones, Xavier De Le Rue, and Bryan Iguchi reaped the benefits of, before inspiring the current generation of shredders – with names like Nick Russell, Elena Hight, Clark Henarie, Victor De Le Rue, Pica Herry and many more – to take the sport further than anyone had ever dreamed. 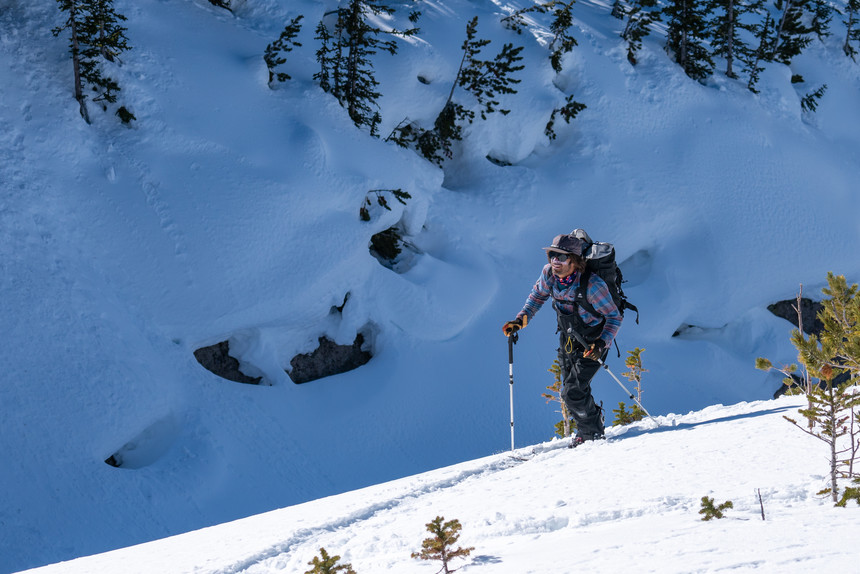 Catch me on the skintrack. | Ming Poon photo.

Fast forward to the mid-2000s, and not much had changed. As a whole, snowboarding was still focused on park and pipe and mechanized backcountry riding. Mike and Dave Hatchett’s production company Standard Films was the resounding voice of the culture, chronicling riders venturing to Alaska, big faces in France, and all the nooks and crannies in between. By and large, however, the means of getting up the mountain was not human-powered. Enter Jeremy Jones, and his trilogy of TGR films Deeper, Further, and Higher. Of course, Jones needs little introduction, but the impact that showcasing the possibility and freedom of bringing a splitboard and a pair of skins into the backcountry was lasting, and that inspiration has continued in subsequent TGR films like Ode to Muir and Roadless.

Today, Nick Russell sums up his inspiration, saying, “When I first got into it, it was all because of Deeper, Further, Higher. I didn’t even know Jeremy when those films came out. Those movies gave me such an intimate look at that style of riding, the camping, the travel, and seeing that really struck a chord. It was so humanizing for me, versus crazy video parts from contests and stuff is so unrelatable. Making turns in pow was what I wanted to do, and then learning how to climb up something and ride down made it even more interesting. In the mainstream of snowboarding, there wasn’t anyone showcasing that kind of riding except Jeremy. Seeing that you could grab a tent and go get lost in the woods in your backyard was pretty cool.” 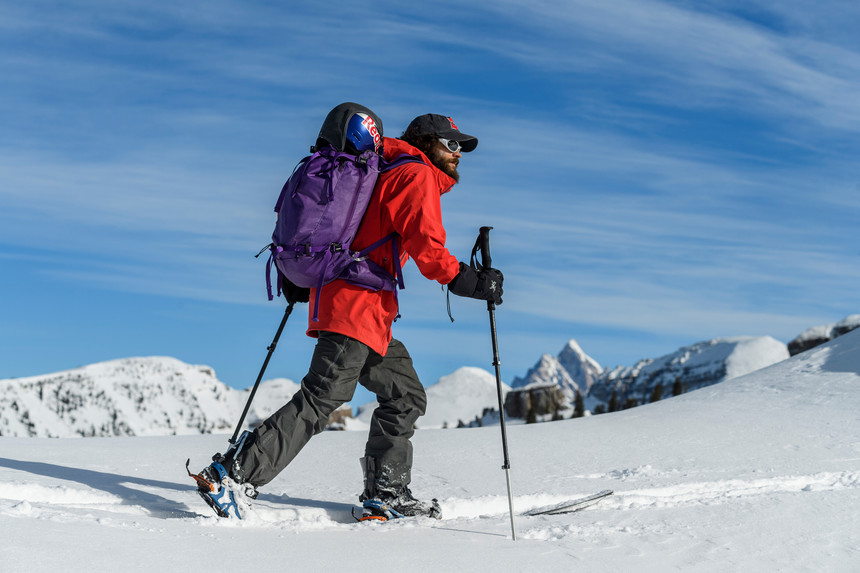 Keeping with the theme of evolution, this current generation of riders is taking things even further. The years of cumulative experience have rubbed off on the likes of Russell and Henarie, as well as inspired riders coming from the freestyle competition scene to take their skills into the backcountry, like Hight did in TGR’s film Ode to Muir and Blank Canvas. Today’s gear, safety knowledge, and simply the fact that taking care of your body and environment is now “cool” has led to new horizons being opened.

Russell says, “I think for me personally, the more time spent in the mountains year after year, when so much can be packed into one season, I do feel that things are progressing rapidly in terms of what is possible. That’s in terms of physical fitness, not just like Kilian Jornet-level, but the simple fact is the fitter you are the more riding you get.” Missions that used to require bringing a tent and camping for a few days are now being done in a single push. In terms of weather knowledge and snow safety, there are so many tools at the disposal of riders for expanding their knowledge of the mountains and being truly self-sufficient. Having guide-level safety and navigation skills are imperative, giving these riders the confidence to take things yet another step further. 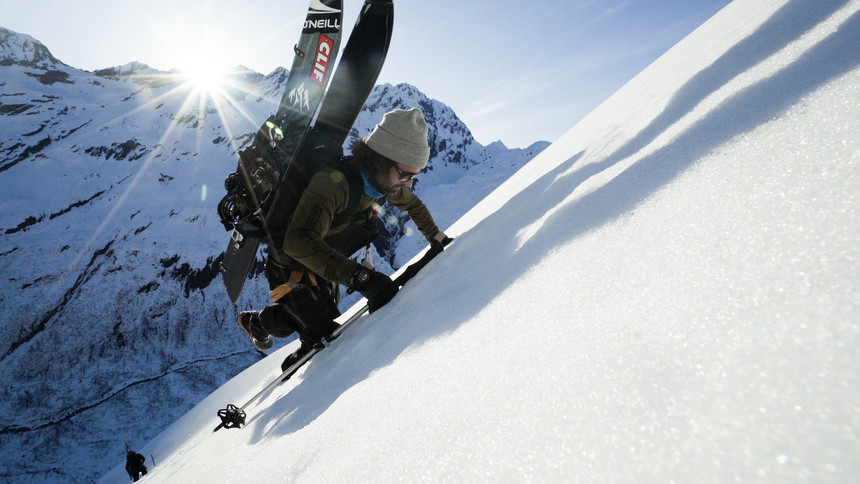 Jeremy Jones has pushed the limits of human-powered riding longer than most. | TGR photo.

For riders like Tahoe-based Russell and Tetons-based Henarie, exploring every little nook of their home range is a way to hone these skills to take them anywhere in the world. It’s no wonder they find themselves climbing and riding wild lines together multiple times a season. Across the pond, the likes of De le Rue and Pica Herry (just to name a few of the many highly established snowboarders based in the French Alps) are pushing those same limits, combining technical mountaineering with a freeride-forward approach to riding unfathomably big lines. The human-powered approach gives them the capability to two or three ridges back, climbing and riding peaks they’ve ogled for years. “I look at it as a way for us to appreciate our home ranges. You’re seeing this bigger world unfold in front of you, and at the same time it’s becoming more attainable to get there,” Russell says. 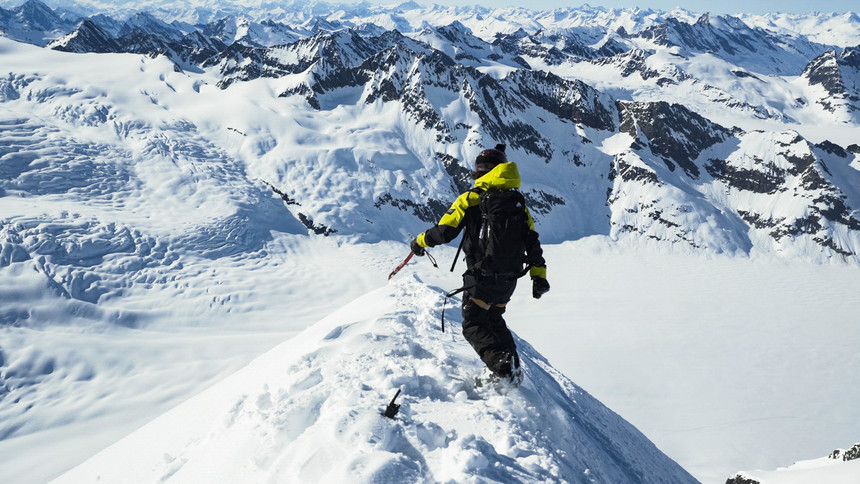 No helicopters in sight. | TGR photo.

Looking to the future, it’s clear that the limit is really in these riders’ imaginations. A strong focus on mentorship in the community, as well as the cumulative experience of doing this season after season is only opening more doors. While the majority of the riding will likely never leave the home ranges, Russell and other riders of the next generation are hoping to return to the greater ranges of the world and continue what the pioneers started. With so many unridden, beautiful peaks that are such a challenge, it’s an alluring proposition.

While the official first stop of the 2021 Freeride World Tour might have been canceled due to COVID-19, it didn’t stop the athletes and crew from spending an extra few days in Andorra to put on a replacement event that outdid the first stop, held last week! Again, the athletes dropped into The Port del Rat face – this time with a third start gate offering further creative options and a fresh layer of snow to entice the athletes to go even bigger. And go bigger they did. Congratulations to

Have you spent the last couple weeks daydreaming about Natural Selection? Wishing you could replay all those huge airs over and over? Well, we've got good news for you. The Jackson Hole stop premieres on Red Bull Snow's YouTube channel on Wednesday, March 3, 2021. All your favorite moments from the tour have been edited down into one, 60 minute reel where you can relive them as many times as you want. Between the world class snowboarding and top-notch film crews, the highlight show is sure to

Absinthe Film’s latest project CHANNEL ZeRO was a treat for the eyes, featuring of course some of the best snowboarding we’ve ever seen. As part of it, a standout segment included riding from Selema Masekela, Russell Winfield, Ben Hinkley, Stevie Bell, Gabby Maiden, Durell Williams, Keir Dillon, and Dillon Ojo. It’s Black History Month, so Absinthe released the full Tribute segment for us to enjoy riding from some of the best Black snowboarders in the industry. Whether it’s heavy-hitting