This April, Caroline Gleich became the fourth person and first woman ever to complete all 90 ski descents in the iconic Utah guidebook The Chuting Gallery. Andrew Mclean’s guidebook, first released in the late 90’s, is a list of the gnarliest ski mountaineering objectives in Utah’s Wasatch Range, and has gained notoriety among the backcountry skiing crowd as a definitive resource for the area.

Throughout her career, Gleich has been thrown into a controversial light. Many doubted her ability in the mountains, calling her a mere “ski model” with too many Instagram followers, and laughed when she set out to complete her goal of skiing every line in the guidebook. This didn’t stop her from trying. 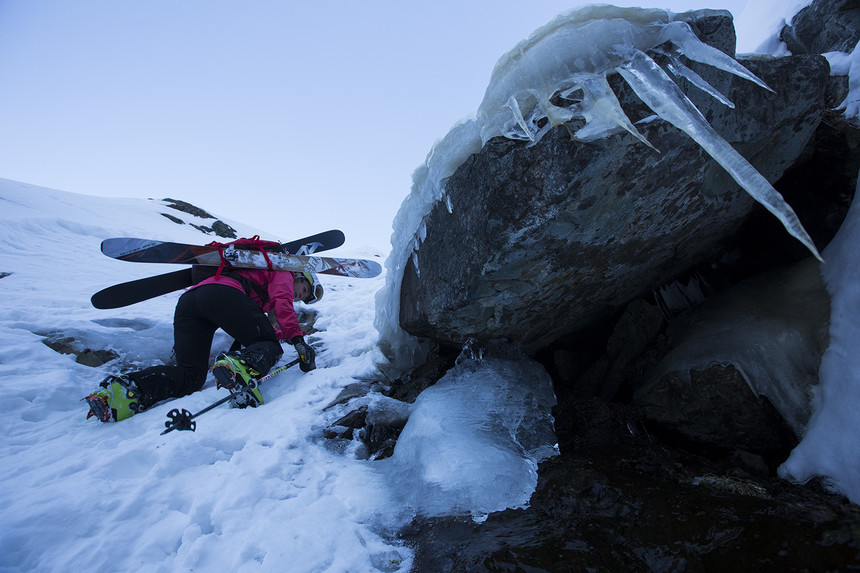 Most of the lines involved technical climbing to reach the top. Adam Clark photo.

I talked to her following her final descent of Ciochetti’s Ribbon back in April, when she was elated to have completed her long-time goal. Gleich spent nearly two years diligently checking lines off the list with a numerous partners, including Mclean, Brody Leven, Emilie Drinkwater and her boyfriend Rob Lea. The project was without a doubt one of the hardest things she has ever done, requiring much more than just technical skiing ability. She had to deal with the emotions around the loss of her half-brother Martin and her good friend and mentor Liz Daley, who both died in avalanche accidents. As she started her project, she was forced to face the issue of online harassment, including dealing with an internet stalker who plagued her everyday life. 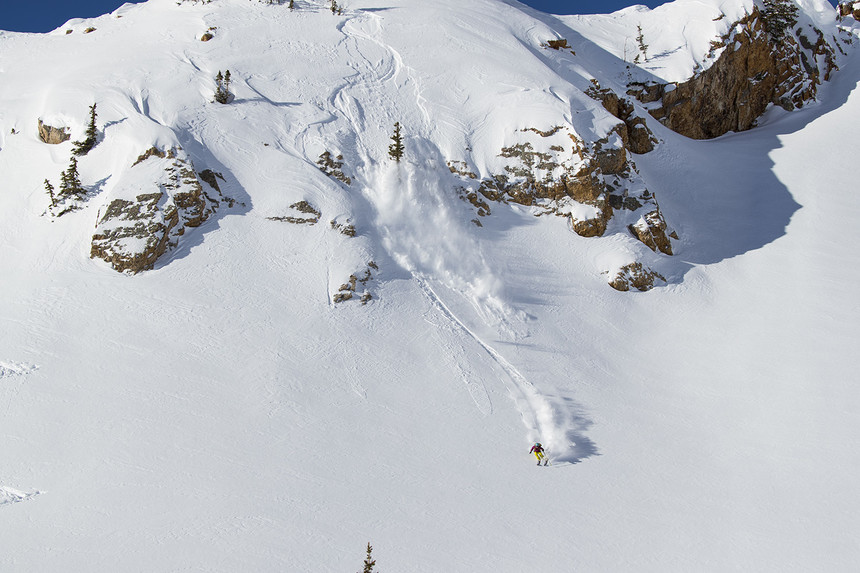 Gleich rips down a pow-laden face deep in the Wasatch. Adam Clark photo.

REI and Duct Tape Then Beer present Follow Through, a film chronicling her attempt to ski all 90 lines in the book and deal with the issues of harassment. For one thing, it delves into the struggles she faced to complete her project, but for another it’s got some of the best cinematography of Wasatch steep skiing we’ve ever seen! Wow!!! Love the film and skiing ta boot!!!! This skier is super impressed with all of you! Hope to ski ya later!! From Tahoe City…with love. D

What’s to be insecure about, Caroline? Clearly, your game is on point and you continue to develop as an all around badass ski alpinist. Lots of years ahead of you to get even better.
For an athlete like you trying to put the pieces together to make a living doing what you love, social media seems like a necessary element. But clearly, your participation exposes you to complete assholes like your buddy “Dave” on the phone. Sort of caught me off guard, actually, that someone would do that and say those things to a stranger. Not sure if there’s any other way to get the exposure you need but you’ll clearly have to grow a thick skin to push forward or you check out from social media all together. Either, keep hittin’ it and we’ll see you in the hills!

I have got no words to appreciate this lady. I don’t think not many guys would have the guts to do these stunts or even ski the lines she had done. I was really scared to see her ski one of those steep lines.
louvre museum tours

If you ever wanted most exciting and fulfilling Nisha Verma your one stop solution to satisfy all your sexual desires.
Escorts in Delhi
Escort in Delhi
Delhi Escorts

This is something that nobody can ever expect, and I think that life will be much better and easier after this thing.
Mumbai escorts
Mumbai escort
Mumbai call girls