John Collinson has been around the block when it comes to his big mountain career, and this year was yet another chapter in the life of the Wasatch-based skiing icon, joining his close friends on the trip of a lifetime in Alaska. The North Face, Red Bull, and Völkl ripper teamed up with Griffin Post, Elyse Saugstad and Caite Zeliff to hunt for elusive beachfront spines in Seward before chasing snow further north into the mountains outside of Talkeetna. Dealing with injuries over the past few years has taught Collinson a thing or two about patience, and it’s a lesson he’s taken into the mountains with him. This year’s trip required a fair amount of patience for conditions to line up, but the 10-year Alaskan veteran came well prepared. We caught up with Johnny on a downday in Alaska while filming for Stoke the Fire to hear more about the trip, what keeps him stoked and plans for the future. The film is available for digital download now.

Tell us about your time in Alaska filming for Stoke the Fire this year. What was it like sharing the experience with that crew?

Yeah. So we were up in Seward, Alaska, which is about two hours south of Anchorage. It’s a pretty unique little setup because we're right on the ocean and we got some big spiny mountains that come up basically right from the water. The crew's really awesome, it was me, Griffin Post, Elyse Saugstad, and Caite Zeliff. It's pretty rad because having two women and two guys gives it a nice balance I think. And everybody's pretty easy-going, almost to a fault. We'll get out to a zone and choose lines, there's a lot of like, well, you should take this or you should take it. And where normally it's kind of people claiming lines and fighting over territory. So super easy-going and really awesome to work with. 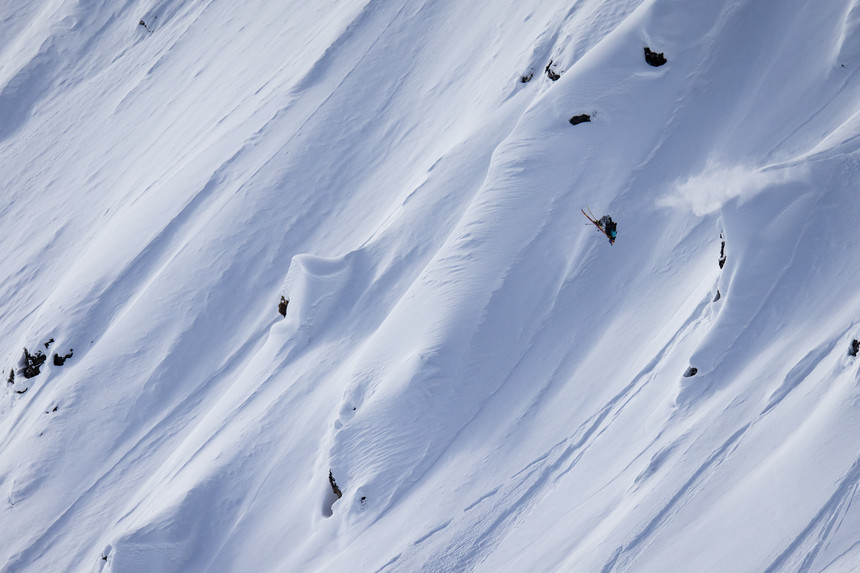 Johnny stretching out the legs in Alaska. | Eric Parker photo.

The landscape there on the Alaskan coast is really something else. Think of the coast, like all these fingers that come down with these ocean bays. And each of those fingers has these mountain ranges on it. Those mountains are covered in spines and snow for hundreds, if not thousands of feet. You have the water, some sandy beaches, a layer of pine trees, add then just straight into the classic Alaskan mountains. It's pretty Epic.

Spines by the ocean? Can you give us a first impression of the zone?

Seward is pretty unique in the fact that we're in this awesome little town with the ocean right here, all these little beaches. And from the beaches, we're looking up at ski lines. I have this photo of us on the beach and there's one of our favorite zones right in the background. We showed up and had two days of blue weather, which was awesome and we could jump right in the heli to get out and check out the zone. There's actually kind of a lot of steps to doing that because there's no infrastructure there regarding knowing what the snowpack or snow conditions are doing. So we were kind of doing that on the fly: going out, looking for zones that have lines we want to ski, seeing what the snow conditions were like in those zones, digging some snow pits, and checking out how the snowpack was from an avalanche perspective. On top of that, we had to figure out the sun's rotation and what light was hitting all the lines. So there's kind of a lot of dominoes that have to fall into place before we could really get rolling and start shredding. 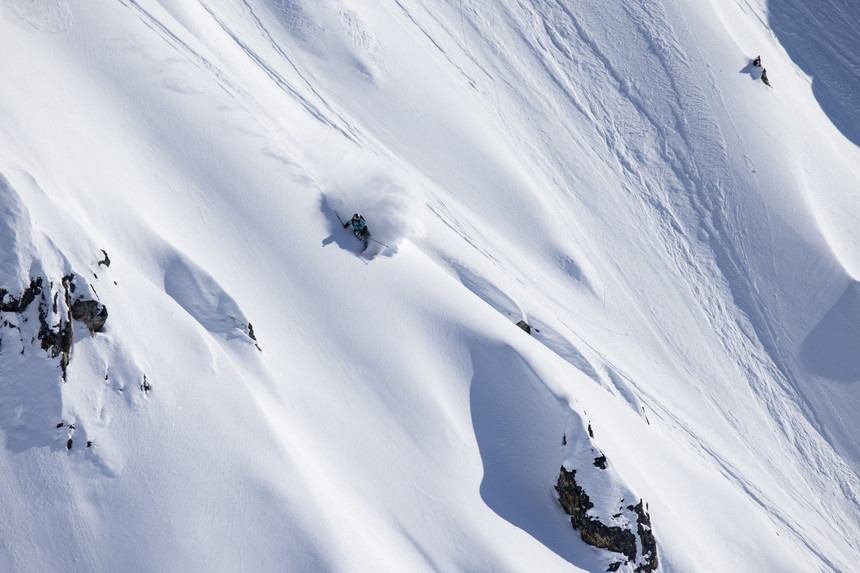 The energy is always crazy because it's obviously so high at first and then it gets tempered with each kind of reality check like, all right, the snow conditions aren't skiable on these aspects. But then you find an aspect where it is skiable, so then it goes through the roof again. It's kind of a lot of ups and downs where you're so stoked and then it can take kind of a hit and then it gets brought right back up. Because it's not all said and done until the film crew's all set up, we're bumped up on top, the light's good and you're skiing.

You had three incredibly experienced Alaskan skiers as part of your crew, with Caite mixed in. Was there a mentorship dynamic present?

Totally. There was. And it's funny to think that I had any sort of experience or mentorship before coming up, but I was like, oh man, this is my 10th trip to Alaska. And that's a lot of years and lines of experience of my own but also that's a lot of mentorship I've gained from other athletes like my sister Angel, Sage, Ian...the list goes on of all these legendary skiers that have kind of passed on tidbits for me to build into my style. And then now it's really fun to be here with Caite on her first TGR trip. We talked about line choice, slough management, and all these little details that go into picking out the perfect film line and trying to ski it well. 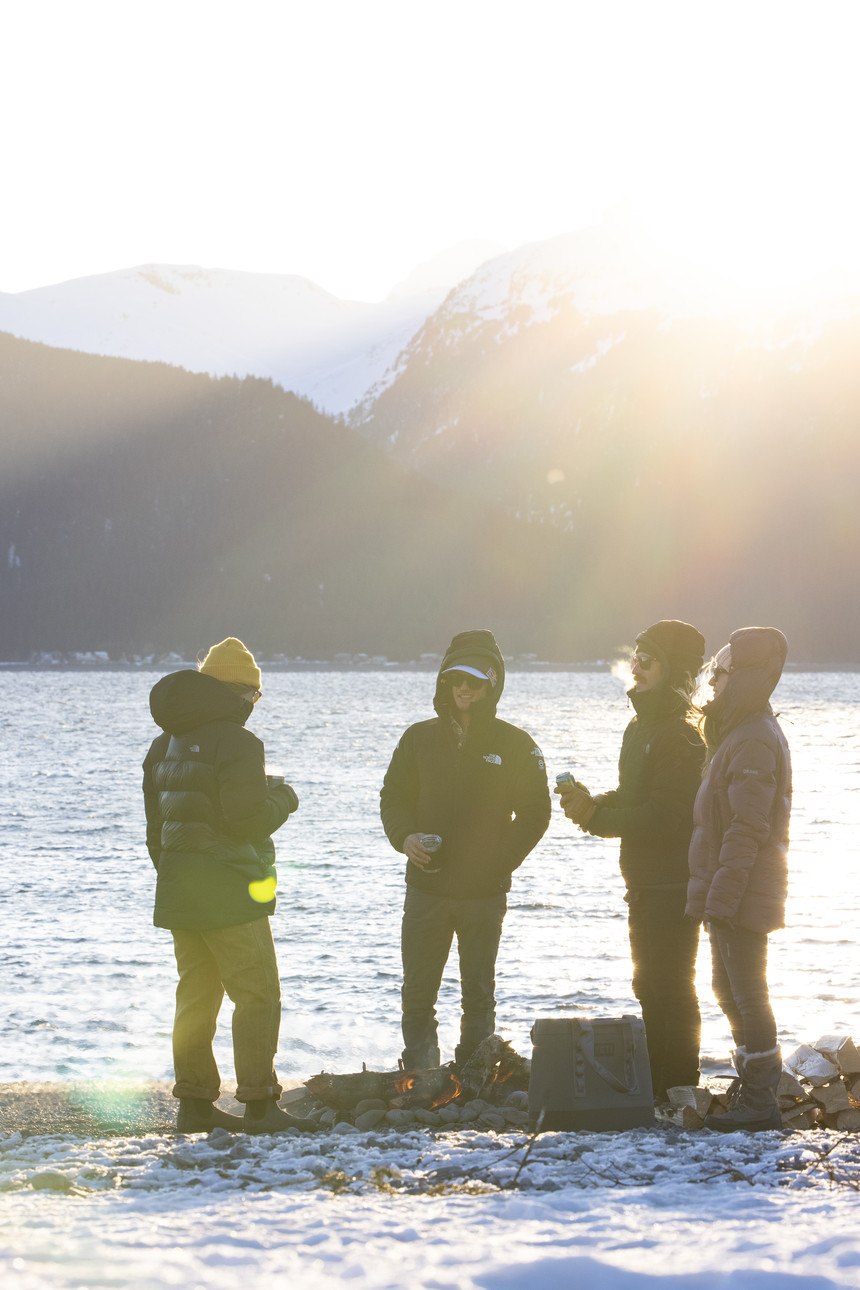 Nothing like discussing the day's plans beachside. | Eric Parker photo.

Can you describe a ski bum for us?

I mean, I think to me, the ground rules for being a ski bum are that you're going to do whatever it takes to get to ski. And that could be at the level of bumping lifts. And that gets you ski breaks every day. And you're living at the resort. I think that's ski bum 101. But then there's, on the other side of that scale, a lot of folks like us. I considered myself a ski bum. And I'm just doing the work that allows me to ski as much as possible and I feel very fortunate for the level of ski bumming that I've gotten to do. But I think there's like a nice range.

What do you think the process of evolution is for a skier?

The general evolution of a skier. So a boy and a girl really love each other…

No, you start skiing at whatever age you do. And I think there's probably the initial love of learning something new, feeling the speed to this, to that. And so you fall in love with it. See you hit a little peak and then it starts to maybe go downhill, when there's more to learn. And it's really hard to learn. Call it the ski racing days. I really sucked at ski racing. And then you find something else that really makes it exciting, jumping off a cliff for the first time. So you start that trend back upwards. Then maybe there's another plateau. You're really killing it, but you can't get any sponsors. So you got to wash dishes or something. So maybe it comes back down. But as you're going, there's all these little roller coasters and waves that keep it climbing higher and higher. Until you get the call to go to Alaska. And that's the big granddaddy double loop on the rollercoaster. That's how I see it. It's some ups and downs, but the next up is always higher. And so it's always feeling that stoke. 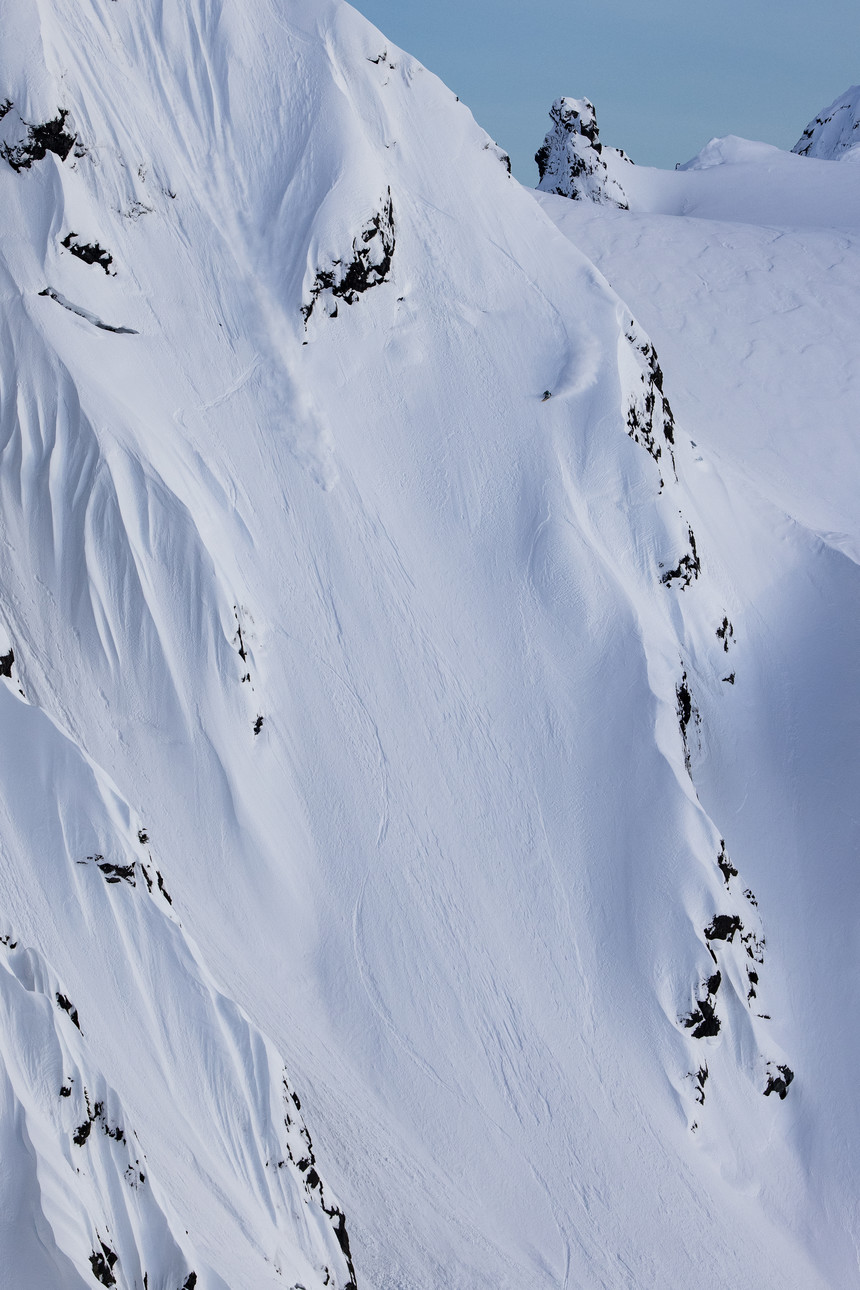 What do you think Alaska symbolizes to the ski community?

To the ski community, or at least to me, Alaska just feels like the pinnacle. It's kind of wild and unprotected in terms of avalanche mitigation on these slopes, but some of our favorite backcountry terrain is on some of the steepest faces with some of the best snow you can ski all compiled together. And the peaks that have that terrain are everywhere. In some of our other ski terrain, like in the Wasatch or the Tetons, there's maybe one or two little zones that could maybe compare to that. And then once you get up here, it's just mind-blowing the amount of steep terrain coupled with good snow all over the place. It requires a lot of respect, for sure. I don't know when you're “ready” for Alaska. I think it's a really incredibly special moment in every skier's life when they first get to go to Alaska. And I'm not sure if you're ever truly ready. I'm sure if you're the most seasoned big mountain veteran on your first trip, you'll probably feel a little bit better off. But there are so many unique variables that are special to Alaska that can definitely kick you around. 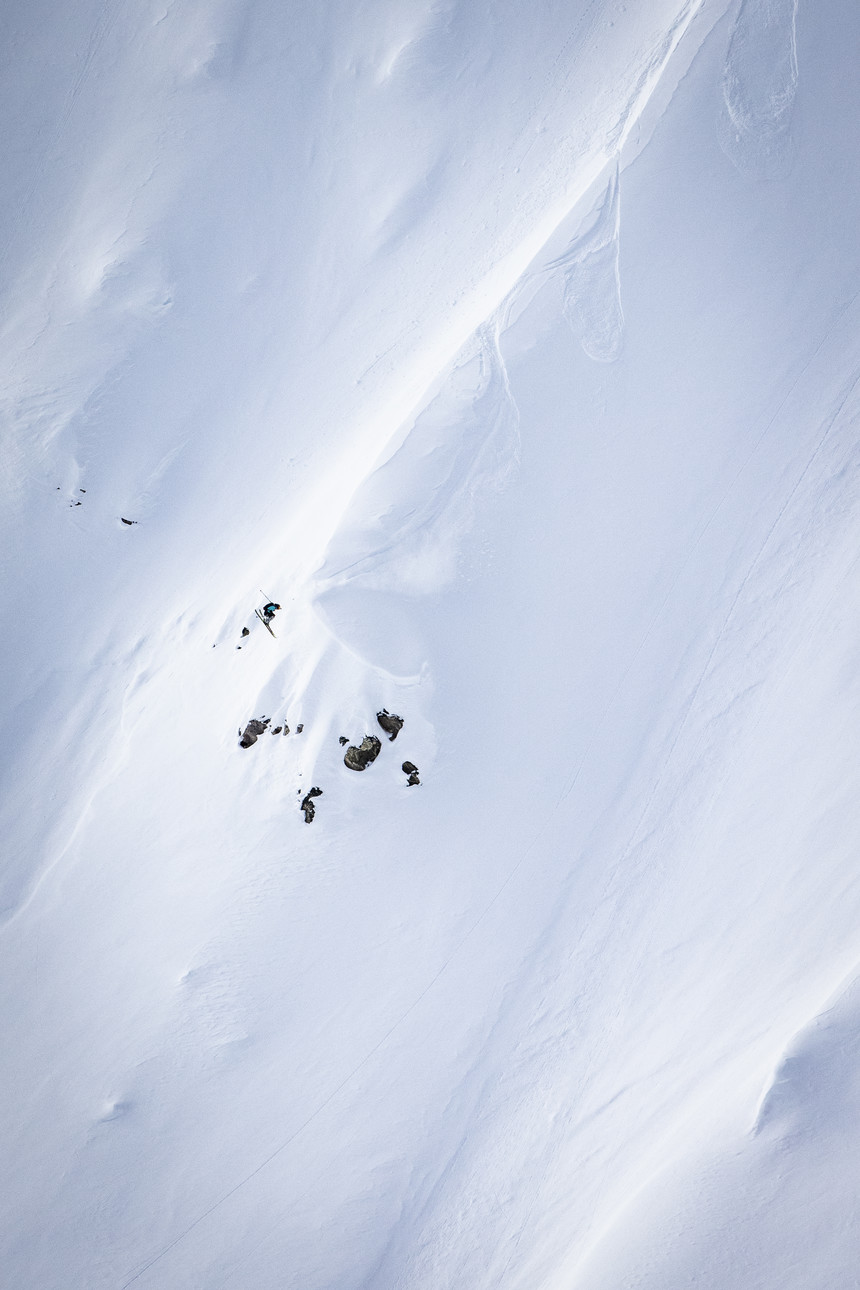 So what gets you stoked these days?

Yeah. Well, I’m pretty into lawn maintenance, at this point in life, nice furniture is good too. A vacuum that really works well. And you get the crackle when it rolls on the carpet. That's some good stoke.

Joking. I think for me, true stoke comes mostly from sport. And it's in these time increments that you think about a lot, but actually happen infrequently. There’s always that really sick powder run or, for me, I'm not very good at surfing, but if I catch a wave, I can't help but be so stoked. And in certain moments like that, where you can think about it for a long time. And you know what the feeling is of that moment. And then when it actually happens. It's like the stars aligned.

Created in co-production with Red Bull Media House, Faction's latest feature film  showcases a diverse roster of 26 world-class athletes hailing from eight countries and their respective talents. Some highlights include a women's freestyle segment with Olympic Gold Medalist Sarah Hoefflin joined by her Swiss counterpart and Olympic Silver Medalist Mathilde Gremaud in a segment that highlights the rapid progression of women’s freestyle skiing. Freeskiing heavy-hitters such as three-time X