The swath of land that stretches from the plains of Nebraska to the Black Hills in South Dakota has always been sacred to Connor Ryan. As a Lakota, it’s the original territory of his tribe. But as a passionate backcountry skier, he never thought to bring his skis here. Skiing in Nebraska—come, again? It wasn’t until he heard murmurs about a small but passionate backcountry ski community in the “Paha Sapa”—aka the Black Hills—that Ryan’s imagination ran wild. Even though he grew up in Colorado, much of his family is from South Dakota. For him, time spent back in his homeland has always felt formal and a bit unrelatable. Skiing, he realized, was an opportunity to “walk” in his ancestor’s footsteps and drop into a few couloirs along the way.

The film Paha Sapa: The Skier's Journey follows Ryan’s human-powered homecoming in his ancestral land. More than just a shredit, the film takes an intimate look at the painful history surrounding this contested area, and the ways we can heal moving forward. We sat down with Ryan to learn more about the project and the ways the outdoor community as a whole can elevate indigenous voices. 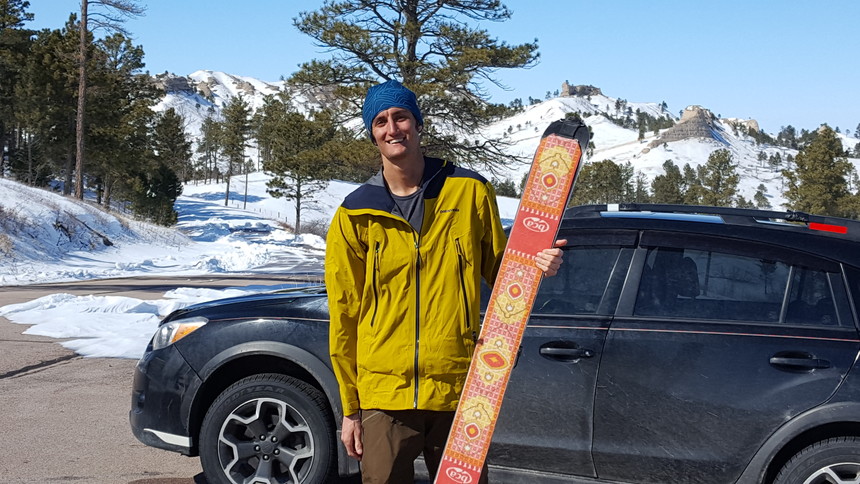 Can you tell us a little about yourself?

Connor Ryan: I ski and work with Natives Outdoors, which is a Native American owned media and apparel company. It’s still a small startup, so it’s hard to say what my “defined” role is, but I help collaborate with making products, getting them into stores, and creating media content. Technically I’m an ambassador, but I help out with a lot of different stuff.

Rumor has it you made a cameo in Episode 17 of Cody Townsend’s The Fifty Project?

CR: I did! It was a really cool experience. It was the start of Cody and I’s friendship, and I think he’s the cornerstone of where skiing needs to be headed. Looking at his career, he’s put in years of work sending the gnar, and is now slowing down and taking this approach where he’s getting to know the mountains in a deeper way.

It was really compelling that Cody really let you and the other skier Len drive the narrative for the episode.

CR: It was humbling. I didn’t actually know what I was getting into. My boss Len Necefer at Native Outdoors is quite the character and hit me up two weeks before and didn’t mention anything about The Fifty Project. He just sent me GPS coordinates to meet him, Cody, and Bjarne at a campsite. I almost got lost but made it late in the night. The next morning I woke up and found out that we were filming the “Mt. Tukuhnikivatz” episode.

I came into the experience hoping I could glean some information from Cody, and it ended up being the reverse. He was eager to hear from us.

What prompted the 'Paha Sapa' film for you?

CR: It originally came about from a friend and filmmaker Mike Whelan, who’s doing this project to ski each state’s high points. He reached out to me about the North Dakota episode, because the highest point is currently on private property but it also happens to be sacred land to the Lakota and Dakota tribes. He interviewed me to provide more context regarding the 1887 Dawes Act, which allocated treaty land privately to different tribal members. Since the land became privately owned, much of it got sold off, even though it was promised to be made into reservations for Native Americans. As you can tell It’s a complicated issue, and he interviewed me to provide context.

Next on his list was South Dakota, and I immediately wanted to be part of it. My Uncle was instrumental in getting Harney Peak—the highest point in the state—renamed to Black Elk Peak. It just seemed like a natural fit to work together. 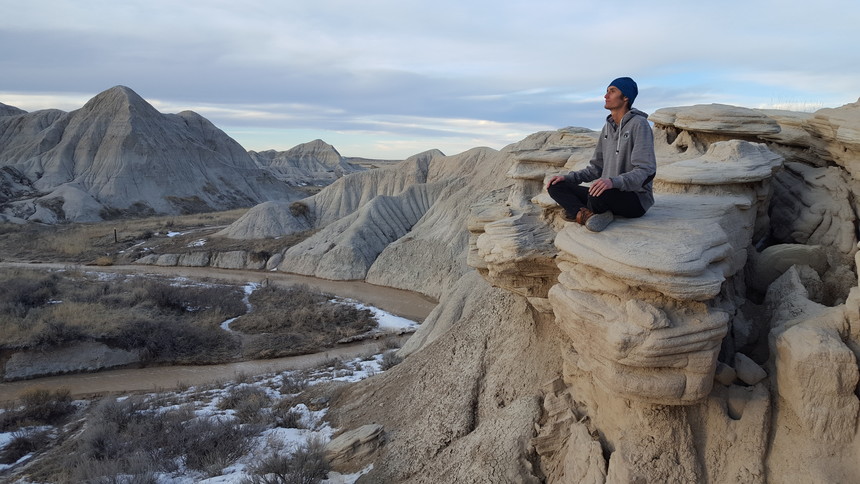 But you actually started the journey in Nebraska, which really isn’t on most people’s radar for skiing.

CR: Yeah, you have to go through the corner of Nebraska to get up into the Black Hills. It’s just these weird bluffs.

The landscape was pretty dramatic though, at least not what you think of Nebraska. What did you guys think of the terrain?

CR: It was pretty cool skiing around there and I think that’s the magic of being skier in a place that’s not a ski destination. You’re forced to use your imagination to find unexpected lines. I don’t think most Nebraskans look at these features and see ski lines.

I’m Lakota and these places are where my ancestors are from, but at the end of the day I was born and raised in Colorado and I’m a skier. I didn’t have a way to relate to these spaces aside from ceremonial gatherings. Being able to go there and ski was making sense of the landscape in a way that feels familiar to me. It was refreshing because skiing is my tool for loving the outdoors.

The film explores the importance of reconnecting with ancestral land. How did backcountry skiing facilitate this?

CR: For me, I’m always trying to balance that side of myself that’s “indigenous” and the biggest way I do that is moving through a landscape. If you’re a poet or artist, you would get to know a place by painting a picture of it or writing a poem. That’s how skiing works for me. It’s my art form. Being able to look at a place and find the most aesthetic line through it makes me walk away feeling like I have a relationship to it that is really personal, artistic, and my own. 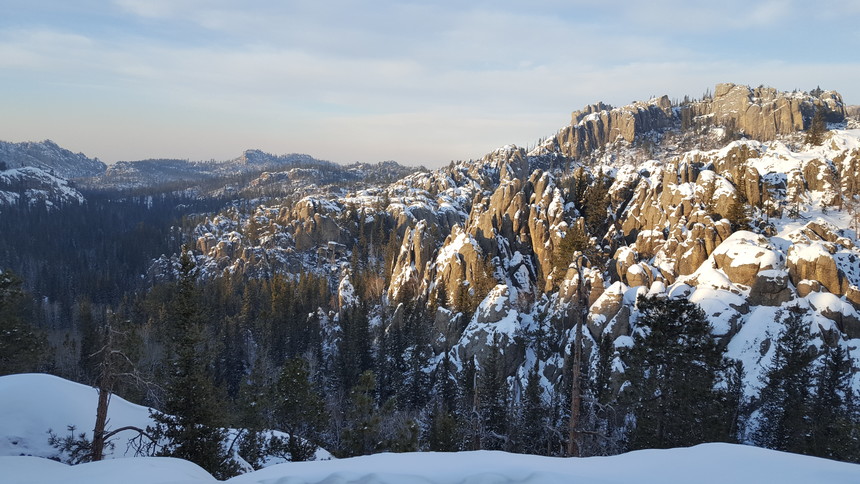 The Paha Sapa has been a sacred spot for the Lakota people for thousands of years. Mike Whelan Photo.

Was it an emotional experience moving through your ancestral land?

CR: Yeah it was, and it was a hard thing to encapsulate in the film. There’s a lot to be felt. There are pieces that are really tender and sad. You know, driving through these beautiful places and seeing a biker bar or an abandoned mining operation just stirs up these feelings of injustice. Obviously, as an indigenous person, I have a vision of how things should be and the reality is far from that.

But getting to ski there felt like bringing balance in a way that is new. It gives me hope that not everything needs to go back to the way it was before colonization, but there’s also a way of making things right. A lot of good things can still happen, which is exciting for not just the Lakota people—but all people.

The film also talks about the painful history of Black Elk Peak. There are obviously other scars left from colonization on the land. What are the ways we can move forward and heal?

CR: I think realizing that if we value these sacred places, then we naturally value them untampered with. Whether we identify as a skier or an indigenous person, nobody seeks out the outdoors to find something tame and ruined. I think that’s where real commonality lies. We have the potential to collaborate in the future, especially if indigenous ways of relating to space are respected, we can make places continue to be beautiful for thousands of years. There’s a lot of listening that can happen on both sides. Sports like skiing are bigger than the things that separate us, and it creates energy in places like the Black Hills or Bears Ears, which gives us a chance to write a better story than what’s being told right now. 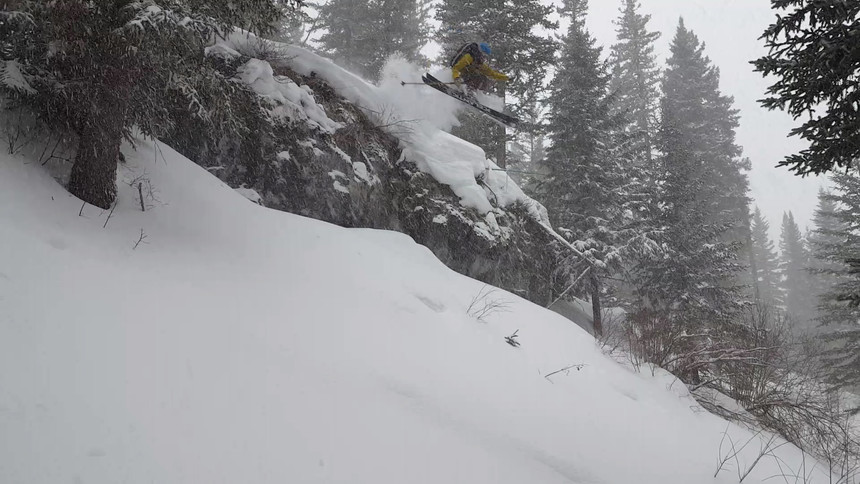 As Ryan shows, the skiing isn't half bad in the Paha Sapa. Mike Whelan Photo.

How could the outdoor industry be a better ally to indigenous communities?

CR: All of the outdoor industry is happening on lands that were once stolen from indigenous people. The outdoor community needs to recognize that they’re stepping into these spaces that have important background stories, and in most instances, the oldest story isn’t being told.

A perfect example is the Grand Tetons. French Canadian trappers are attributed to naming the region, but indigenous communities have lived there for thousands of years. In fact, ceremonial artifacts have been found high up on these mountains—suggesting that people have been climbing them, vision questing, and praying on them for years.

If we adjust our perspective on these spaces, it will change the way we move through the land. There were moments in the Black Hills where I’d get overcome thinking about how I’m skiing in the footsteps of people who were here thousands of years ago—they were just interacting with the land in a different way. If we make the right decisions, someone can ski in these same places a thousand years from now. Indigenous voices need to be addressed, especially when it comes to caring for the outdoors. I feel like a lot of the diversity equity inclusion (DEI) initiatives are focused on marketing measures, but advertising is a pretty superficial fix. Instead, I’d love to see more indigenous people involved with skiing, climbing, mountain biking, and other adventure sports. If we’re going to be guests on these lands—and to be clear I consider myself a guest too—then we should be asking questions on how to include people who have been set back and excluded thanks to the effects of colonization and capitalism.

Thanks a lot for the kind of perfect topic I have not a lot of information about it but I have got an extra unique info in your unique post. Perfect description you have provided thanks for sharing. Latest eu4 console commands and gta san andreas cheats pc .

Last January, Cody Townsend announced an audacious goal to climb and ski all the lines in . 28 episodes later, has gained a cult following with fans eagerly awaiting each episode. It's like for the outdoor industry, but with fewer fights and more skiing.  RELATED: The Fifty - Cody Townsend Shows Off His Absolutely Kitted Out Ford Ranger Now basically at the halfway mark, it seems like a fitting time for Townsend to reflect on the adventures thus far. Join him and Ryan Dunfee—the beloved