Kai Jones has accomplished a lot for a 12-year-old kid. He has a multitude of impressive Teton descents under his belt for someone his age, including lines off Mt. Moran and the Middle Teton. This season Kai continued his assault on the Tetons, bringing bigger tricks, heavier lines and sending big cliffs in and around Jackson Hole. He continued on his trajectory as a young pro skier, going bigger and deeper than ever before, right in his own backyard.

To finish off his season, Kai scored the biggest trip of his young lifetime: a heli-ski sesh in Girdwood. Exploring the Great White North under the mentorship of veteran Tim Durtschi gave Kai exactly the tools he needed to grow a new dimension of his skiing. Skiing steep Alaskan faces might be one of the most technical aspects of the sport, but the quick-learning and very hungry Kai picked it up immediately and put together one head-turner of a Winterland segment. We can’t imagine what’s next for the young ripper. 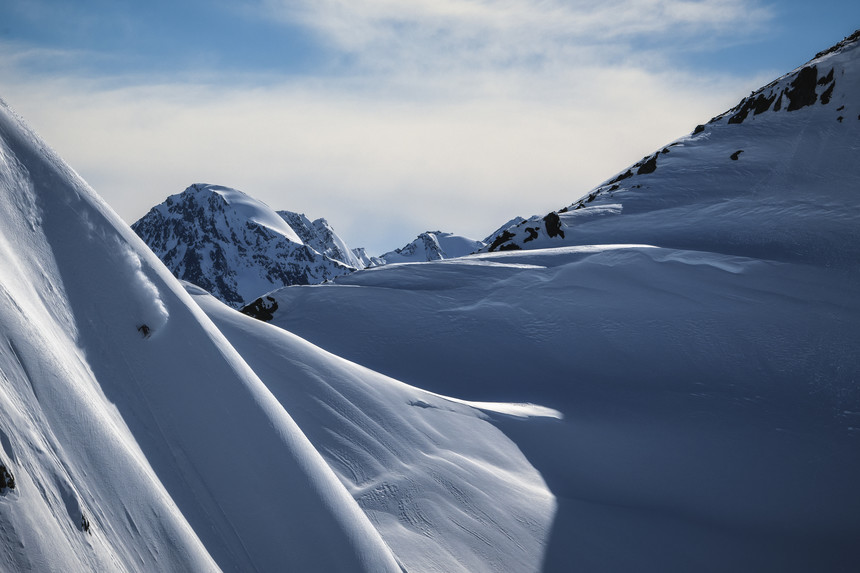 Kai, can you give us a rundown of what your season looked like last year?

I spent most of the season skiing around home in Jackson, ticking off super fun lines around Jackson Hole and the backcountry around it. We hit stuff in Mosquito, on Teton Pass, and outside the resort in areas like Cody Peak, Rock Springs, and the famous road gap on the Pass. The stuff in Mosquito doesn’t really have a name!

What were some of your favorite lines and how did you approach them?

With all the snow, we had to be pretty careful going out there and made sure stuff was really locked up before we hit it. My favorite lines around home were in Rock Springs, Once is Enough on Cody, and Smart Bastard – which is always so much fun to hit. 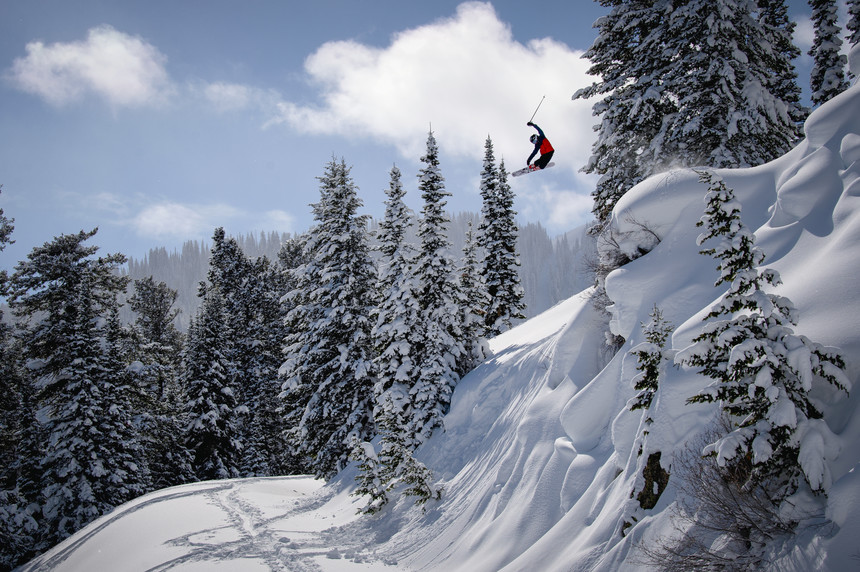 Checking off classic hits like the Teton Pass Road Gap was Kai's mantra this past season. Nic Alegre photo.

Jackson had some all-time conditions, how did you take advantage of them?

February was definitely the deepest snow I have ever seen in the Tetons, but I was gone for a lot of that month competing in places like Kicking Horse and Snowbird. Luckily, they had super good snow there too – overhead bottomless pow. When I came back home for the Targhee and Jackson comps, we had so much snow those days too and it was awesome. The Jackson comp was almost canceled because of snow. I ended up getting first there, which is an awesome feeling!

Competition is really cool because it’s so different from filming – you’re really trying to link tricks and cliffs and smooth technical skiing for the judges. Filming is often just hitting one thing and putting a few fast GS turns down the camera and finding your flow.

You spent a lot of time with your friend Tim Durtschi, what’s it like skiing with him?

Skiing with Tim is super awesome because he’s such an great mentor. He shows me the lines, gives me motivation, gives me tips on tricks, and helps me get over mental mind games. Sometimes you are on top of your line and you have lots of butterflies in your stomach and are nervous, and things are going through your head that really shouldn’t be. So Tim likes to psyche me up and tells me jokes while we’re up there to get me motivated and in the right headspace. 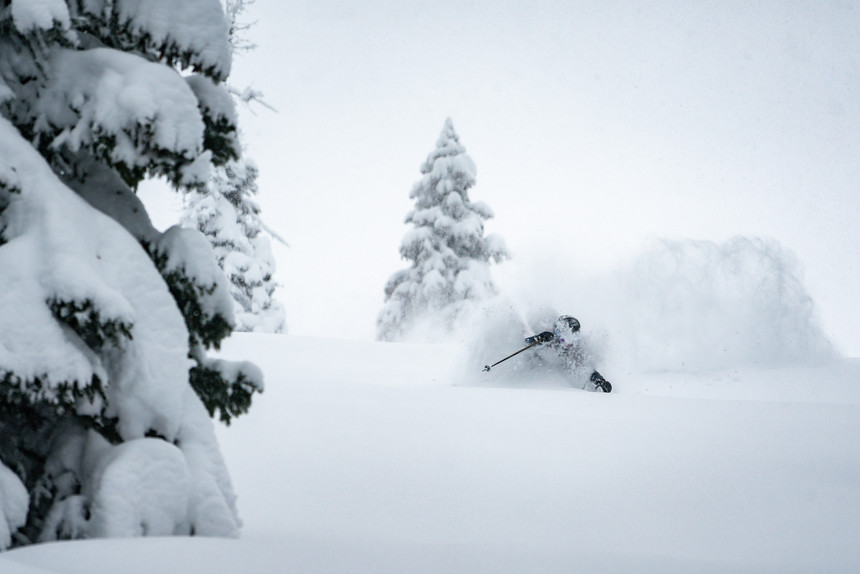 What’s the best thing he’s told you to motivate you?

So last year, in my segment, I kept asking Tim to go first on lines to show me the way. And then this year, we were standing on top of lines and he’d just look over to me and be like “Hey Kai, can you go first on this one?” and that got me really pumped up. I even went first on Smart Bastard this year!

He also always teaches me to be safe in the backcountry and in the mountains in general. He’ll show me little warning signs in the snow and always tells me to keep my eyes and ears wide open to listen and watch the mountains.

What were some of the other things you got into back home?

Mid-way through the winter, Tim and I got the chance to hit this really unique feature over at the Spud Drive-In Theater right near my house. I didn’t really know what was going to happen until my dad picked me up early from school and drove me there and I saw this big jump built over the big potato outside of it. I was warming up to the jump and saw all my friends driving by in the school bus on their way home, which was really cool. They were really confused about what I was doing the next day at school and I was just like “I was jumping over the Spud!” 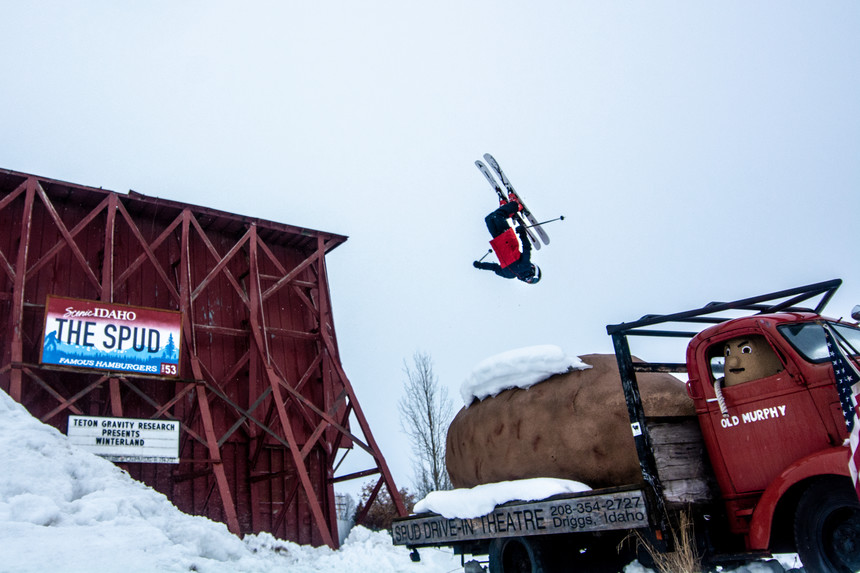 Kai Jones airs the Spud with his friends watching from the school bus. Max Ritter photo.

Now that it’s your second full segment in a film, did filming feel easier this year?

Yeah everything definitely felt a lot more dialed this year. I feel like I knew my way around a lot better, knowing how the lines worked and knowing how I needed to ski them. It’s helped me be more fluid in the field. We only had 15 days of filming all season, so every day really counted, but we were able throw down every day in the field!

When you found out that an Alaska trip was going to happen, how did you react?

I was SO pumped. Flying in there, I was looking at mountains that I’d seen in all the old TGR movies and was just in awe. Everything is so big up there and it’s pretty unbelievable to be able to go ski them. It was definitely much steeper than I thought it would be and it helped me work through my fears of dropping into something blind. We had an awesome three days skiing different zones up in Girdwood.

What was the coolest thing about skiing up there?

What surprised me the most was how scary the blind rollers in the middle of lines were. You also look at a line from the heli and you think a cliff is only 10 feet, but then it’s 20 feet or bigger because you have no trees or other points of reference to judge their size. The blind rollers were scary, but when you drop in you kind of ease into it and get stoked and pull it off. It was also really cool to fly in a helicopter with your skis!

I also think the crew up there was super nice, and the culture up there is epic. I made friends with the pilots and the guides which was really cool. Having Tim up there with me was a huge help as well. 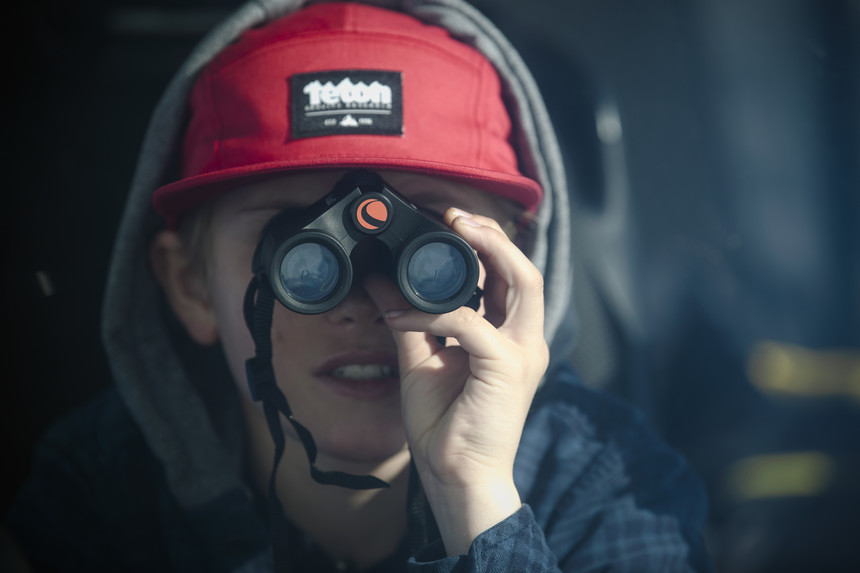 What does the future hold? Only time will tell. Nic Alegre photo.

I want to get some new lines in Jackson, things like Gothic and doing tricks like flips off bigger cliffs in the area. I also really want to travel a little and go ski in places like Whistler and of course Alaska again. Canada just has really good snow, but it’s so cold there! I’m really just stoked to keep skiing and see where it takes me!

Roku is a streaming device, which provides the simplest way to stream entertainment channels to your TV. On your terms. You can access more than 500000+ movies and TV episodes across free and pay on Roku. Also, you will get the best quality video streaming with it. You can watch shows, movies, an entertainment channel, web series, etc.For the activation of the Roku device.

Hulu provides the simplest way to stream entertainment to your TV. On your terms. With thousands of available channels. We provide information regarding Hulu Activation Code. To activate a new Hulu account using an existing email account and you can stream television shows and movies from the Hulu site using the Hulu activation link.

Webroot.com/safe is the only security solution which can protect your system from viruses, worms, malware threats. Get Webroot safe today & install on your system and say goodbye to viruses.

Roku is a package of entertainment. The Roku channel is the Expansion of programming for new generation children. Roku Roku declares plans to Combined kids and family movies and TV together with the channel’s other content, including subscriptions, its free, television, ad-supported movies, and live TV.

Thank you so much for sharing such an inspiring story. The 12-year-old kid leaving his dream. It is not a small thing. It is not possible for everyone. I really want to appreciate best bus accident lawyers los angeles him for his courage and work.

Do you know about Roku.com/link activation ? We assist you technical support to activate your Roku streaming device via telephone from experts. Our experts resolve your issues and help you to activate account. Enjoy your Online Streaming on Roku.

Just make the page so special than cloud based e learning platform any other page. Hey, users, the page is having good ideas that are focused on topics across the areas and are really special for all the readers of the page too.