Sage Cattabriga-Alosa's backstory is part of ski lore. He was the ambitious dishwasher at Alta's Peruvian Lodge who put down his dish towel to throw a massive double front flip on the infamous nearby Pyramid Gap. As the legend goes, TGR's Todd and Steve Jones watched incredulously and added Sage’s stunt to their 2001 film Mind the Addiction. That feat kickstarted his career, and from there, Sage’s skiing skyrocketed. The thing is, I'm not going to tell you that story. I'm going to tell you about the prologue, which played a much more significant role in the main act than we think.

Our story begins in Alta, Wyoming. Sage is a senior in high school and contemplating the monumental question of "where should I go to college?" As a ski-obsessed teen, the only factor that mattered in his brain was the proximity to a ski resort. Given that he had an in-state residency in Wyoming, Idaho, and Oregon, he had a few different options. Bend, Oregon—with Mt. Bachelor right in its backyard—seemed like the ideal place to go. Plus, Sage was already familiar with the mountain, having skied the resort with his father growing up. With his bags packed, he headed to the Cascades. In between classes, he started volunteering with the local ski foundation as a gatekeeper to snag free tickets to the mountain. Hooked on the skiing, Sage bought a weekday pass the following year. It wasn't exactly the most effective decision for staying focused on school, but it meant he could rip around even more.

One of the first things Sage noticed about Mt. Bachelor was the snow. Unlike back home, where the precipitation was lighter and airy, storms in Oregon are laden with moisture from the nearby Pacific. As a result, the snowfall comes down a little heavier, which isn't a bad thing in Sage's book. "It means you could stomp in six inches of pow," he exclaims, and landings like that only made him want to jump off more things. While the powder skiing was hard to beat at Targhee, that fluffy snow didn't always stop you from hitting the firm base lurking underneath. Bachelor didn't have that problem. "I was just so used to dust on crust or two feet of powder, whereas skiing the snow in the Cascades, it felt different when you landed in it." According to Sage, the snow is a lot like Cool Whip. When wind hits the mountain, it funnels through its many hills and gullies, whipping up the snow into all kinds of lips, dunes, and shapes. What's left behind is a natural terrain park, with all sorts of features to hit. "I started to hone in on this unique aspect about the mountain quickly and tried to maximize what could be done with it," Sage explains. For him, it was all about dialing in his landing skills. He'd scope out a wind lip and try to land from one feature to the other as precisely as possible. He made it a fun little challenge for himself to get better each time he hit something.

People love to describe Bachelor as a skatepark, but Sage, on the other hand, likes to think of it as more of a winter bike park. "One cool thing about riding at a bike park is the repetition of air time. That's how I progressed with my biking. So, when you ski at Bachelor, you're able to practice catching air over and over again with every run you take on the mountain," he says. Over two years of practicing, he developed a knack for being in the air and entered Mt. Bachelor's big air competition. He ended up placing second, winning his first-ever pair of twin-tipped skis. That same season, while testing his new sticks, he spotted another skier rocking twin tips and decided to catch a chair with him. It was none other than Chris Collins.

Whatever you want to call it—luck, fate, the universe, or just being in the right place at the right time—that chairlift ride was a pivotal moment for Sage. "Chris had just hit Chad's Gap and was filming with TGR, and Summit Chair kicked off this friendship between us," Sage reflects, and on Collin's word, he picked up his things and moved to Utah. Once in Little Cottonwood Canyon, he started hanging with Collins and his crew of professional skiers. At this point in the sport, hitting massive gap jumps was the trendy thing to do. For most folks, the idea of hitting a 90-foot consequential jump is hard to wrap your head around. But Sage approached it like hitting another set of wind lips at Mt. Bachelor. "It was a much smaller scale at Bachelor, but the terrain there taught me how to determine the pop you needed for a lip and landing," he explains. Because he got to practice this skill over and over on a million different natural features, he developed a ninja-like sixth sense for sizing up all kinds of jumps. "When I made the transition to Utah and started skiing with this group of people who were really into big jumps, it wasn't long before I scaled up those skills." The rest of this story, you know. When Sage landed his double backie on the Pyramid gap, he got his big break and started filming with TGR, ultimately leading to a career full of mind-boggling feats resulting in all manner of laurels and accomplishments. 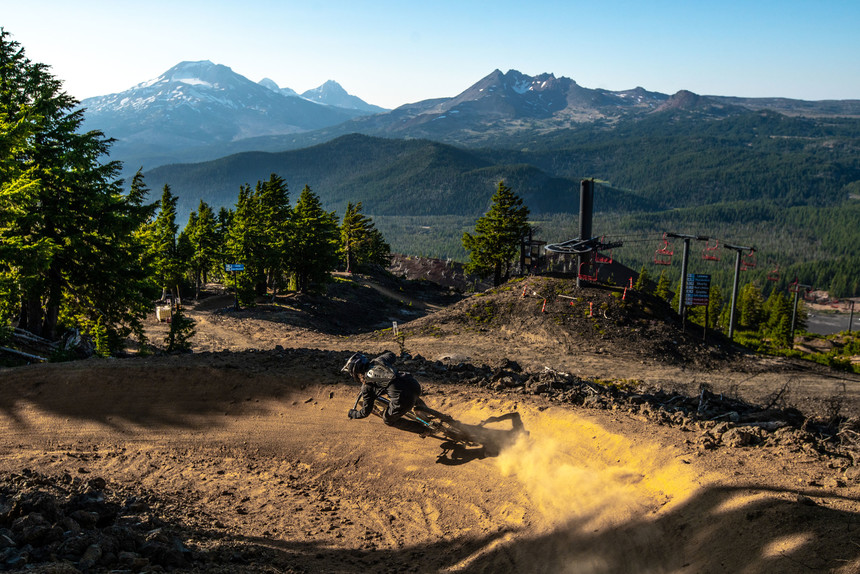 After leaving for Utah in the early 2000s, Sage didn't return to Bend until a few years ago. When it was time for him and his wife to raise their family, the Central Cascades seemed like a natural choice. He still skis at Bachelor, just like he used to, and these days, you can likely find Sage ripping around Pine Marten, Northwest, and Out Back. Though, that's pretty generally speaking because the mountain is so big that often, he finds himself exploring all kinds of new nooks and crannies. "That whole region has bowls and these shots that feel like trails weaving through the forest," he explains. "For me, my favorite days at Bachelor aren't necessarily the big powder days—that might sound funny," he laughs. "I think it's more about the creativity and flow that you find there, and that can happen on the more surprising days."

But it's not just the skiing that keeps him here; it's the vibe. "I've spent a lot of time skiing scary, gnarly terrain, so to have a place that's focused on having fun was appealing to me," Sage says, and he's not alone. There's a vibrant community of skiers and snowboarders—Lucas Wachs, Ben Ferguson, and Austin Smith are just a few to name—who recognize the playful nature of this mountain and treat it like a canvas. "I think the kind of people who resonate with the mountain are the ones who see the terrain as a benefit," he says, and the community here extends beyond just the wintertime. And now, with Mt. Bachelor's growing bike park, it's become a year-round gathering place for himself and other Bend athletes. This summer especially, the bike park was a saving grace. It felt like an oasis to escape the mayhem of town and the pandemic. "It was such a cool place for the community to get together safely," he says, and the mountain isn't exclusive to the locals. Mt. Bachelor makes a point for being accessible to anyone, as long as you're here to ride, ski, or bike. And who knows, you might share a chair ride with Sage himself one of these days—just prepared for some airtime if you follow his line. 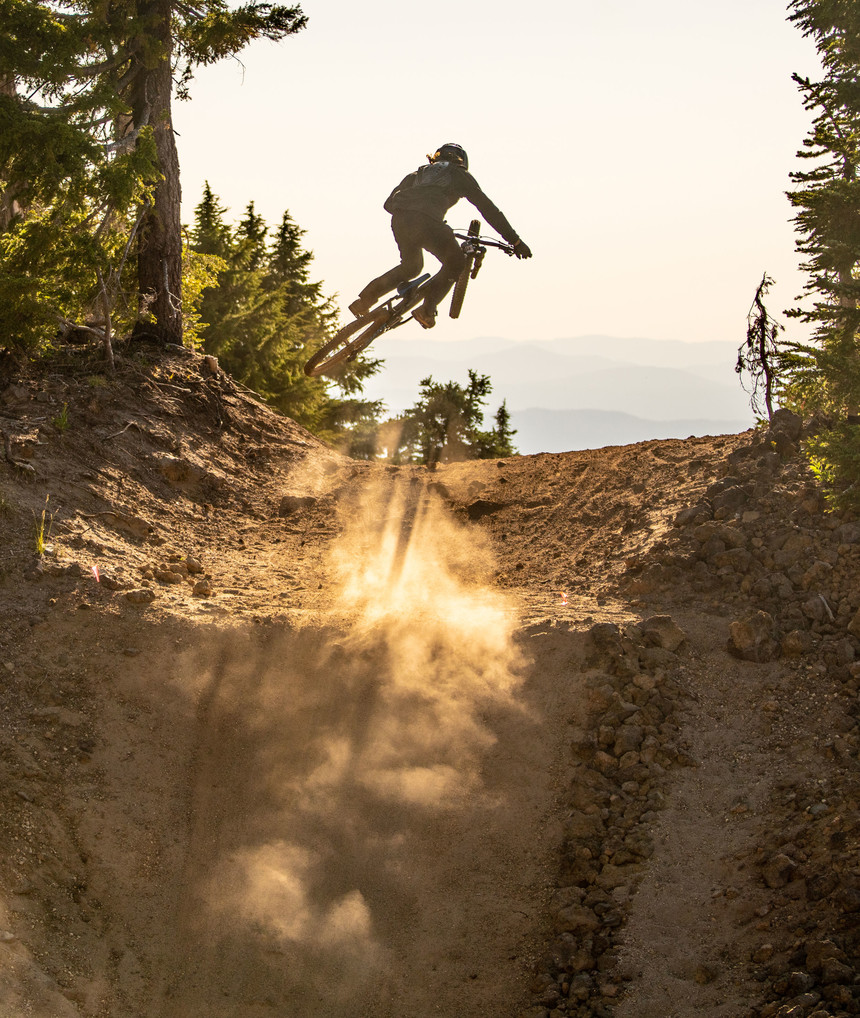 Whether he's on a bike or a pair of skis, Sage prefers to be off the ground. Jon Chandler photo.

play 2 player games for free online in your free time with friends, any device, no download, no installing. no ads.
https://2player.co/

I am amazed by your passion! You definitely are an inspiration! handman

The Line Skis crew, better know as Burrrlapz has released their second edit of the season and boy, is it sweet. They're calling their latest installment a "powder skiing art project" and to that, we respond, isn't all powder skiing art? However, their commitment to riding big pillow lines really does come across as pretty artful. While we've seen plenty of deep days of our own this season, we're still drooling over the bluebird skies and face shots this edit has to show. Backed with tunes

Hans Just Wants to Dance and So Do We

Hans Just Wants to Dance and So Do We

For those who cherish the après just as much as powder, this season has looked a little different. Hopeful youngsters like Hans here just want to find that ski town party. But with COVID-19 shutting down the bars, where's a guy to show off the powder blue fart bag and perfectly groomed stache to go with his dance moves? With no luck hitting the Cowboy, Hans realizes that the party is in the outdoors, getting after it. Armed with his 65 underfoot Rossignol skinny skis and renewed sense of

While the official first stop of the 2021 Freeride World Tour might have been canceled due to COVID-19, it didn’t stop the athletes and crew from spending an extra few days in Andorra to put on a replacement event that outdid the first stop, held last week! Again, the athletes dropped into The Port del Rat face – this time with a third start gate offering further creative options and a fresh layer of snow to entice the athletes to go even bigger. And go bigger they did. Congratulations to