We here at Teton Gravity Research have always loved the pioneers who take risks, throw caution to the wind, and break the mold for what was previously thought possible. After all, our company was founded on nothing more than hopes, dreams and an old film camera. Which is why we found the story of Brian "Speed" Miller, one of the founders of Telluride Helitrax–Colorado's oldest and largest heli skiing operation–particularly interesting.

"I had opportunities to take jobs and make money and invest over the years," Speed told TGR. "Who knows, maybe I'd be a multi-millionaire today if I had, but skiing was always much more interesting to me."

Speed is a lifelong ski bum through and through. He moved to Telluride, Colorado in 1976 when the town was hardly a dot on the map with a population of less than 1,000 because he had a simple, innate desire: To ski as much as he possibly could. And he worked whatever job he could to fulfill that need. 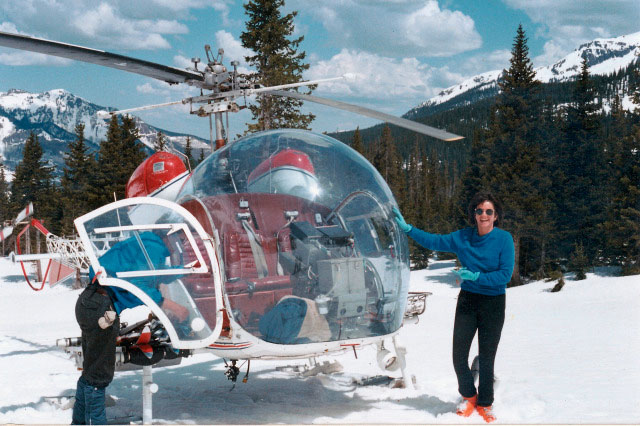 Speed and one of his old school choppers. Telluride Helitrax video.

"In the winter I was a janitor," Speed said. "In the summer, I was a truck driver and an equipment operator."

It wasn't glamorous, but Speed got to ski constantly, and a few years later in 1982 he and three friends came up with a longshot business idea: Opening the first heli skiing operation in Colorado.

"People thought I was crazy," Speed told TGR. "At that time, avalanche forecasting wasn't anything like what it is now, and with the San Juan snowpack, people just didn't go into the backcountry and big-mountain locations they do now."

But Speed–along with his friends Mike Friedman, Mark Frankmann and David Bush–persevered, but not because they thought they were onto a million-dollar idea: They just thought it would be fun.

"We just did it because we didn’t want to be janitors and cooks and busboys our whole lives," the 66-year-old Speed told TGR. "We wanted to find a ski job that was really fun. That’s really why we ended up doing it. We just did it for ourselves."

In the years that followed, heli skiing exploded in popularity internationally, the Telluride Ski Resort drew exponentially more people and Helitrax suddenly found themselves running an operation that everybody wanted a part of.

And while things have become busier, Helitrax has always remained true to its ski bum soul.

"Speed is one of the only true ski bums I know that never sold out," Todd Herrick, the owner of Helitrax who took over the outfit in 1996, told TGR. "He really dedicated his whole life to be able to go skiing everyday, and to this day, that's the mindset we have at Helitrax."

"While it is a business I hate to put the word 'business' in front of heli skiing," Herrick said. "It's so much more for the community. It's such a privilege to have it and to be able to go out and ski everyday. And yeah, Telluride has grown and there's a few new chairlifts since I moved here, but all my friends are the ones I have moved out here with in the '90s. The community is still the same old good folks."

To that end, Speed is still the same character he was 42 years ago when he moved to Telluride, even in retirement age. While many people spend their 60s slowly sliding into the golden years, Speed told TGR he's skied well over 60 days this season, an incredible number when you think of just how late Colorado's ski season began this season.

"Skiing to me is life. I can’t ski anymore I don’t know how I'll be able to live," Speed told TGR. "But right now, I'm living a pipe dream. Who would have ever guessed that four ski bums that were doing menial jobs could start a heli ski business and actually make it work?"