Sometimes skiing isn't just about the skiing. I can also be about hot springs in the middle of the backcountry skinning trip. We climbed Mt. Niseko Annupuri (1308m), skied the backside of the mountain and found an onsen, a Japanese hot spring.

Onsens are of course popular in Japan. But this one was special, being in the middle of the mountains and hard to reach. In the summer, a road leads through the mountains. In the winter, the road is closed. You can still reach the Goshiki Onsen via the tunnel side of the road, but not continue further. But most people visit the Goshiki on skis. We started this journey from the Annupuri ski area's high point, at 1152 meters, and proceeded to climb 150 meters higher to the top of Mt. Niseko Annupuri. In Niseko, you can only access the backcountry via special gates, and to get to the top you should use either gate G2 or G3. The former requires slightly more climbing, but much nicer views and mountain environment.

Once at the top of the mountain, we proceeded to ski down the backside, going the easy route that took us to the closed road. There is also a steeper route more direct to the onsen. The route that we chose is a wide open bowl, but not particularly steep. The snow high up was hard, lower down among the trees it started to be more powdery.

Once we reached the road, we skied on it, going slightly uphill for a kilometer and half, to reach the onsen.

From the onsen one can either take a taxi back to the village (half an hour drive, cost about 40€) or skin up to a ridge 65 meter higher than the onsen, and then ski down to the ski area through forests and bushes.

Skins are useful but not absolutely required on this trip. The initial climb to the mountain is too steep for skins, the road is so level that I didn't even free my heels from the bindings, and the way back to the ridge can also be walked. 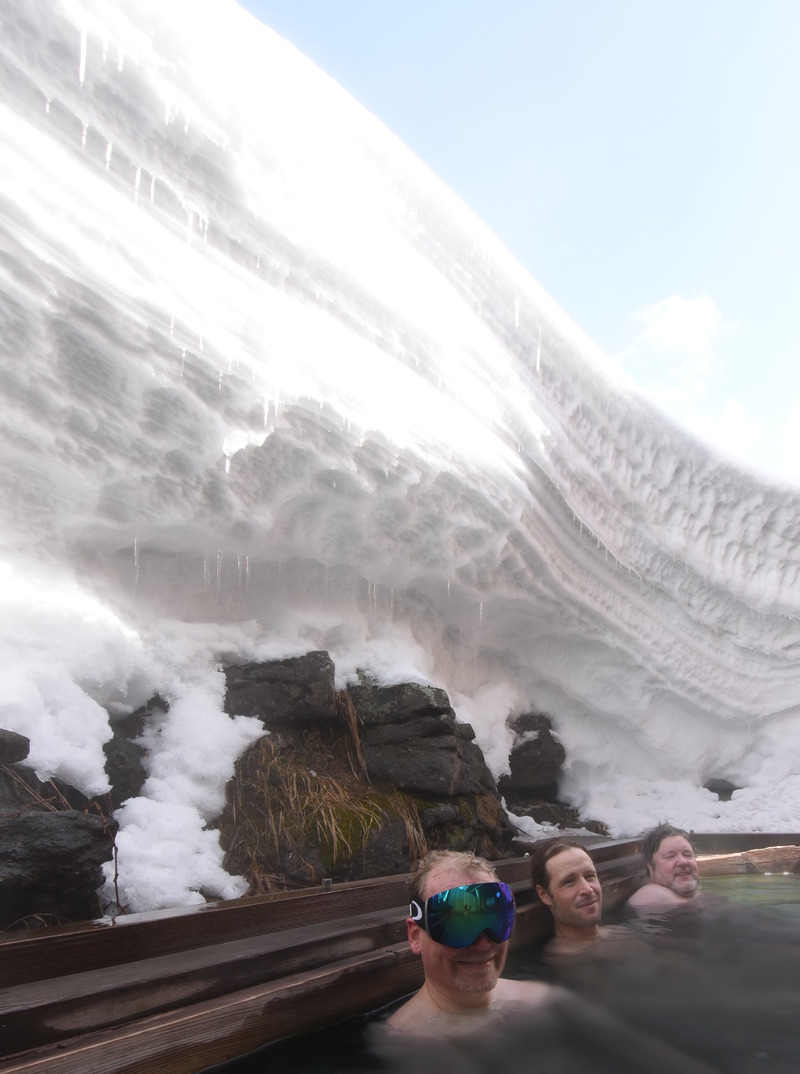 The climb up Niseko Annupuri from gate G2: 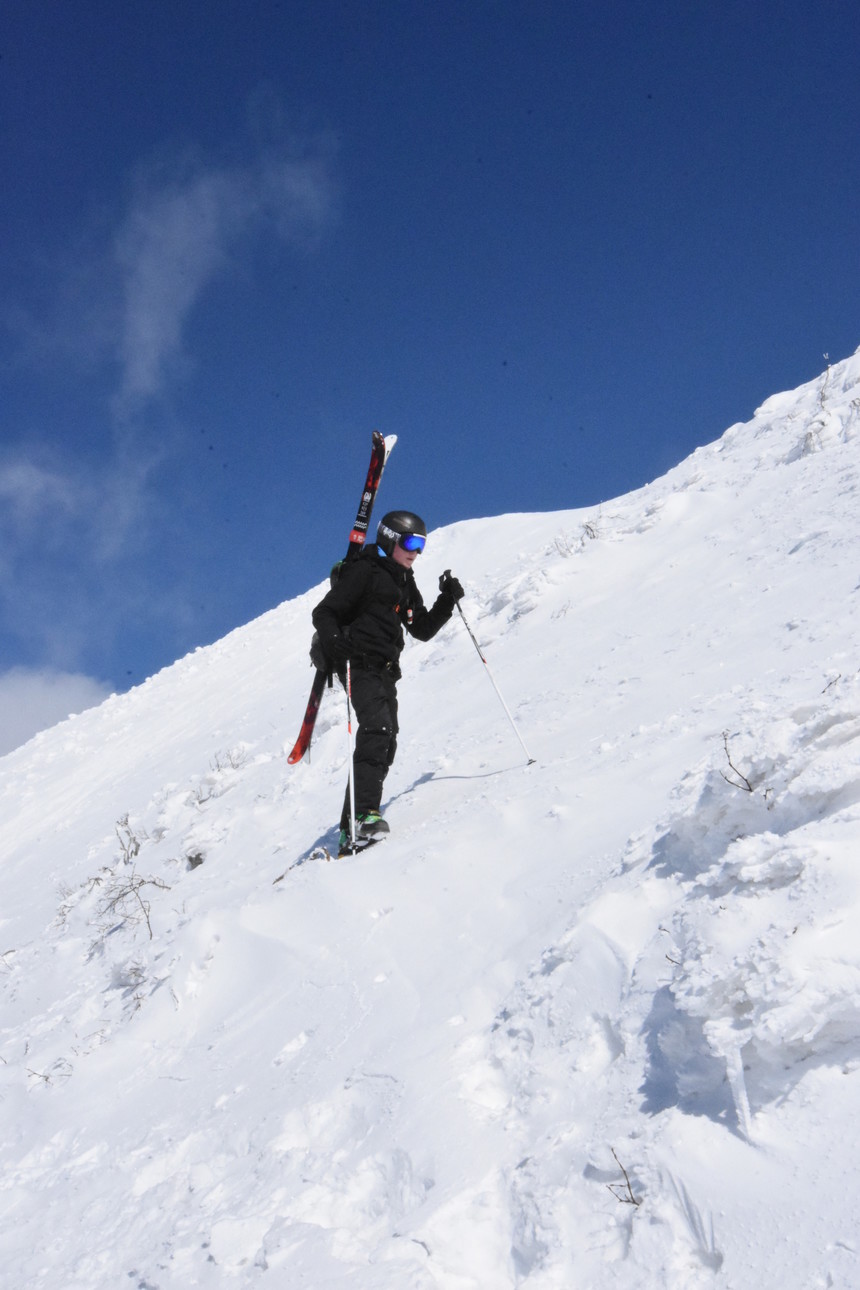 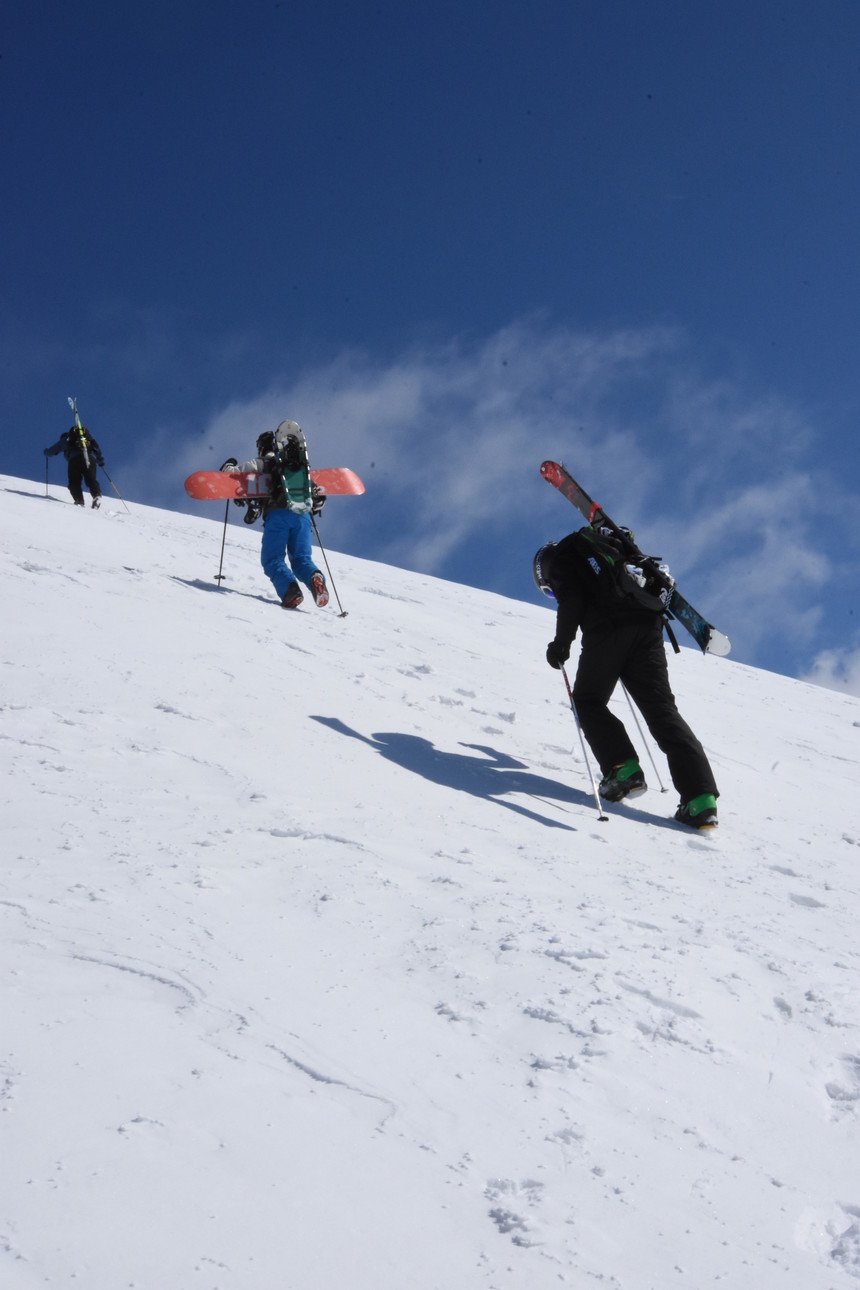 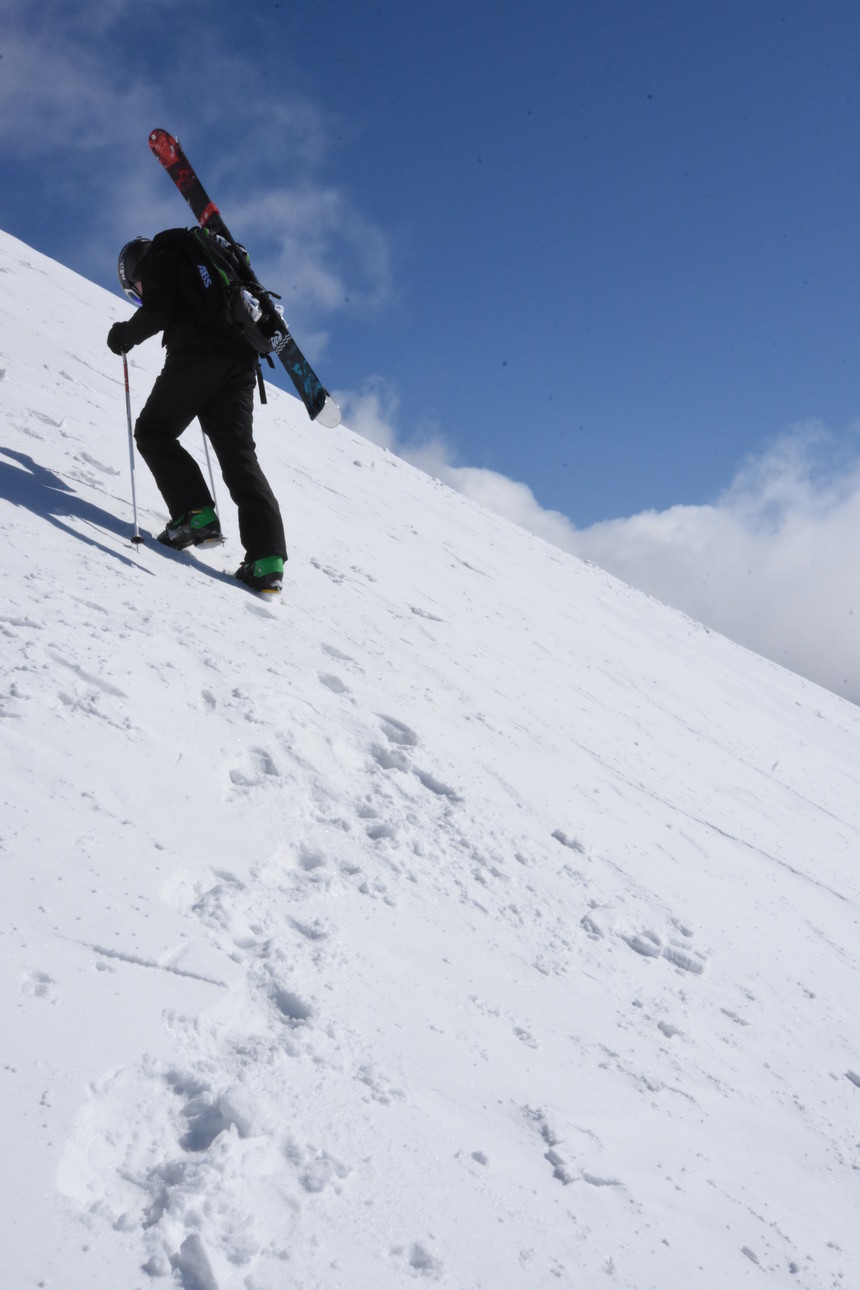 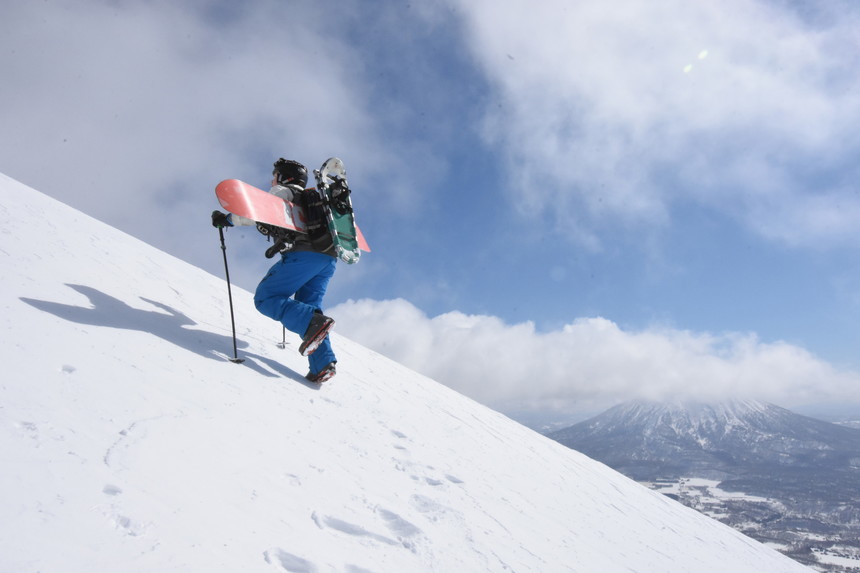 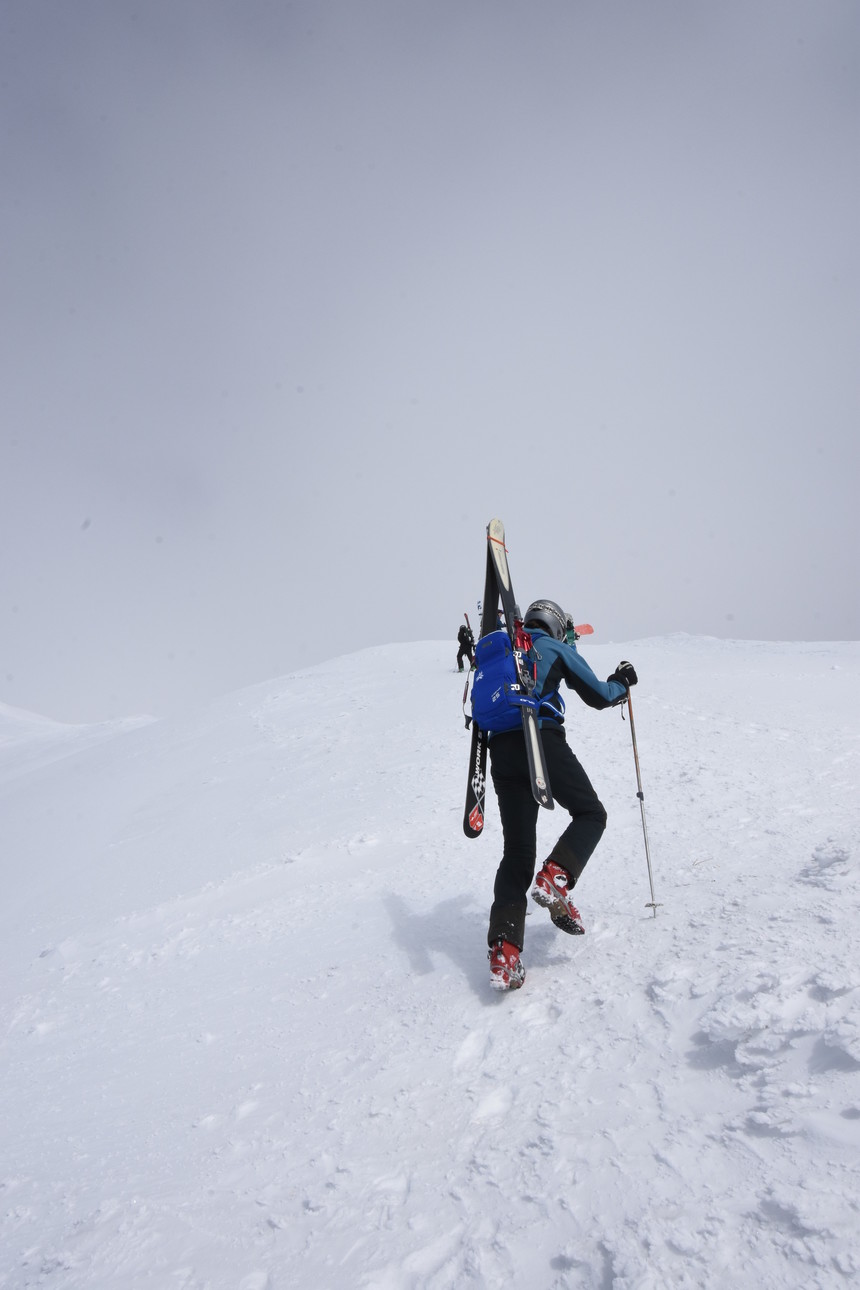 Zach's skis have a message: 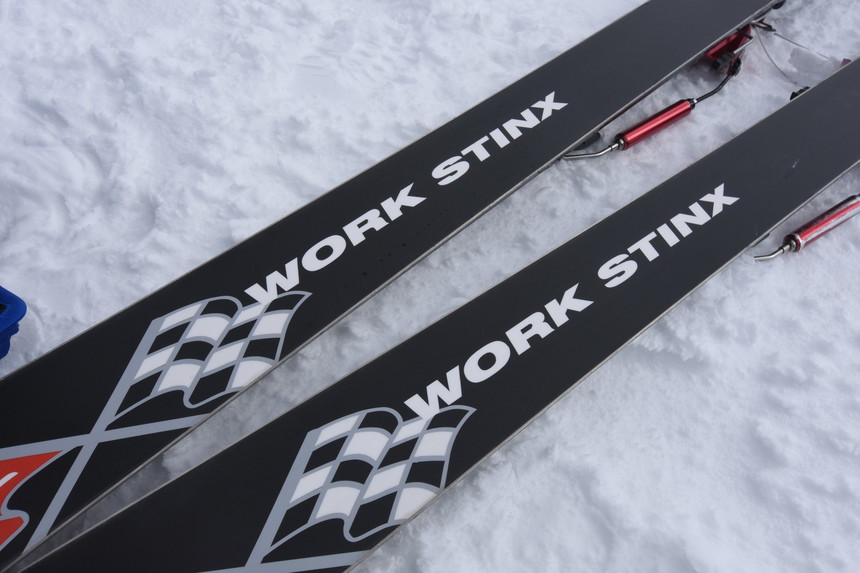 This is at the top of the Niseko Annupuri, starting our descent: 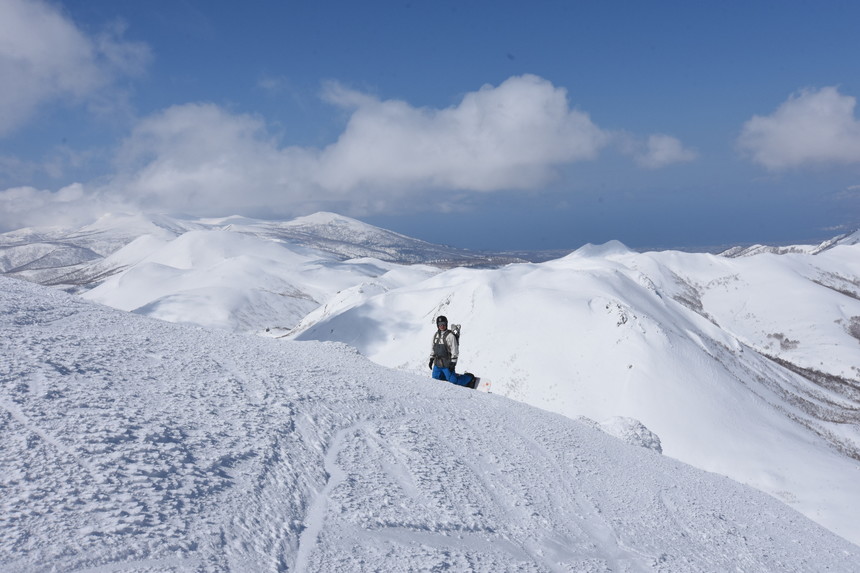 On our way towards the Onsen after the ski run down: 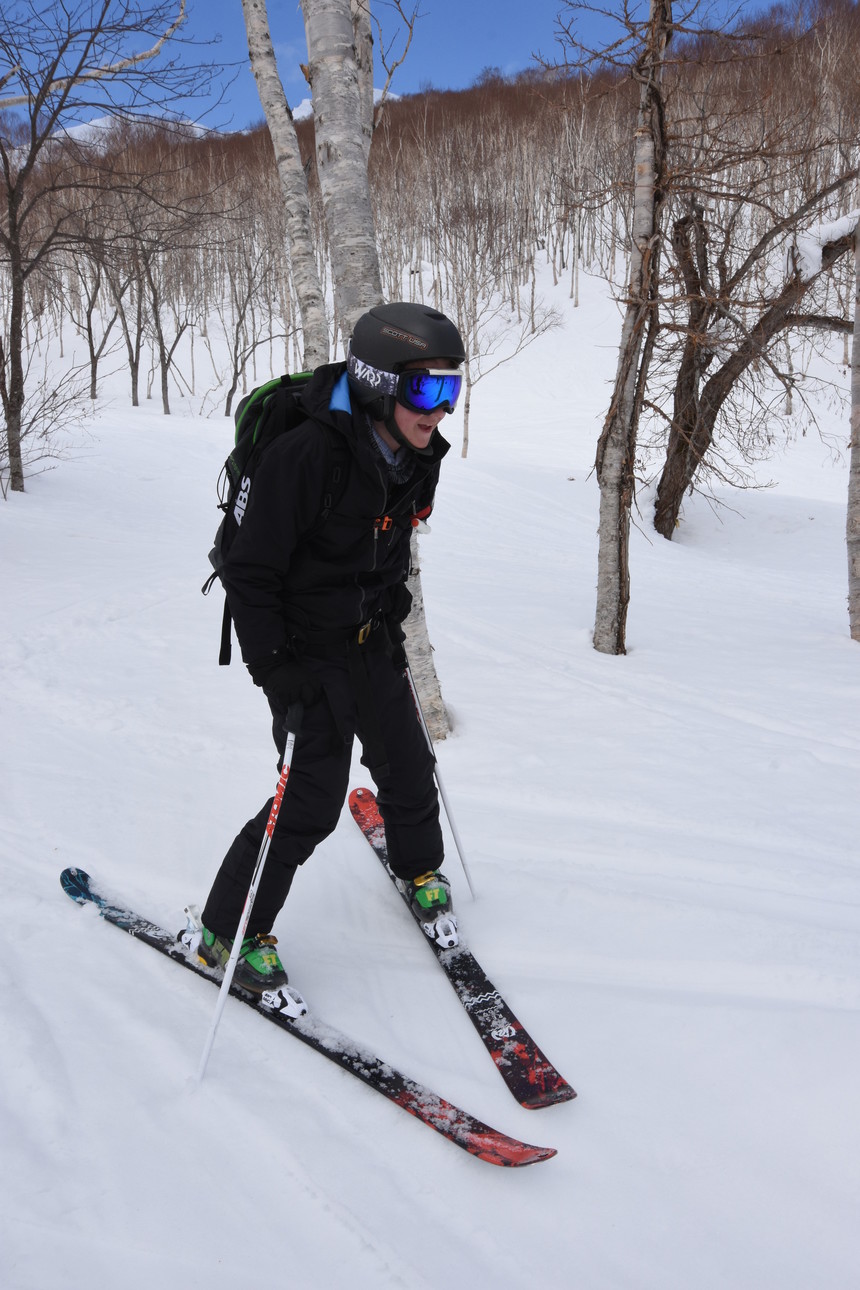 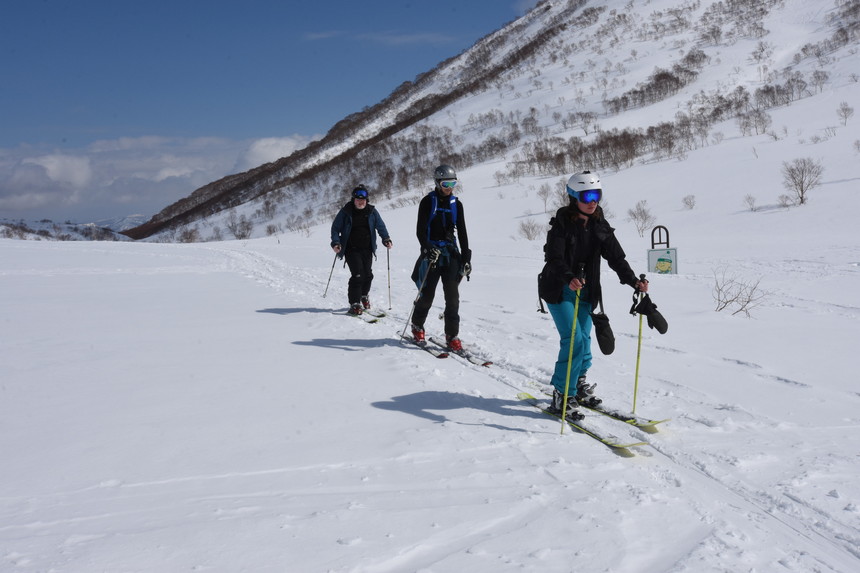 Speed limit on the skinning towards the Onsen. This is on top of a road that is only open for the summer: 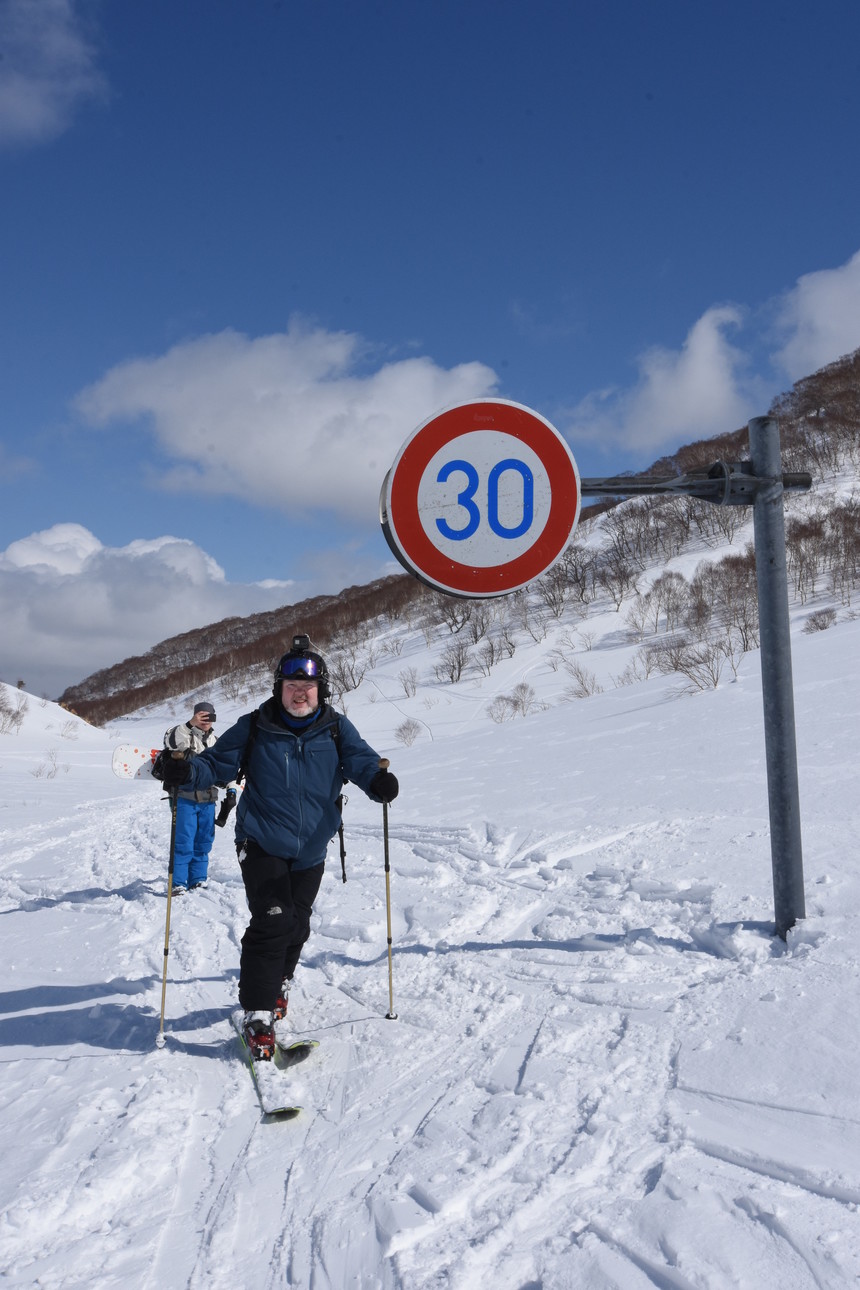 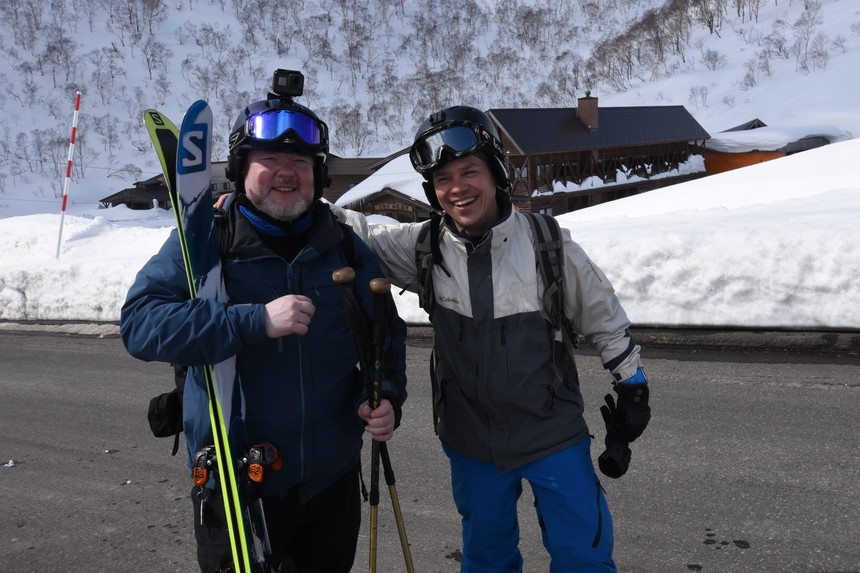 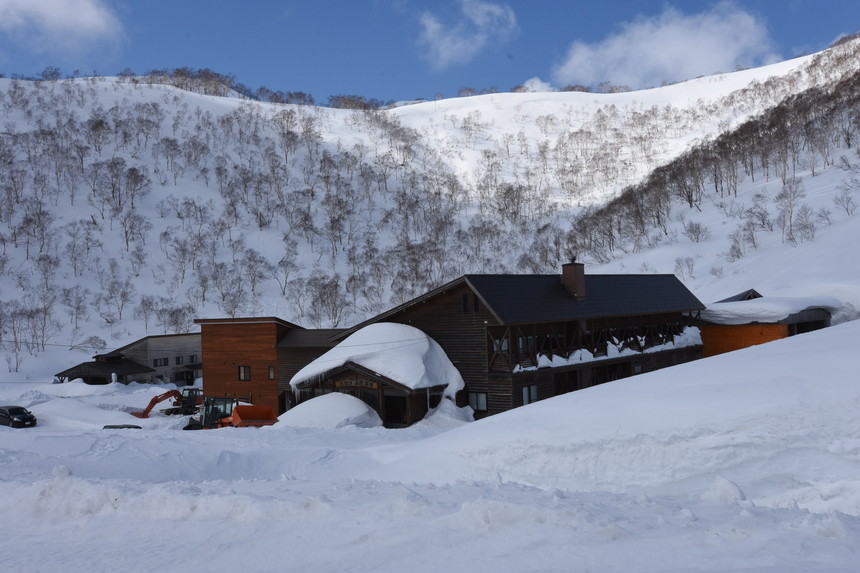 Skiing down from the ridge between the Onsen and the ski area, we encountered some bushes: 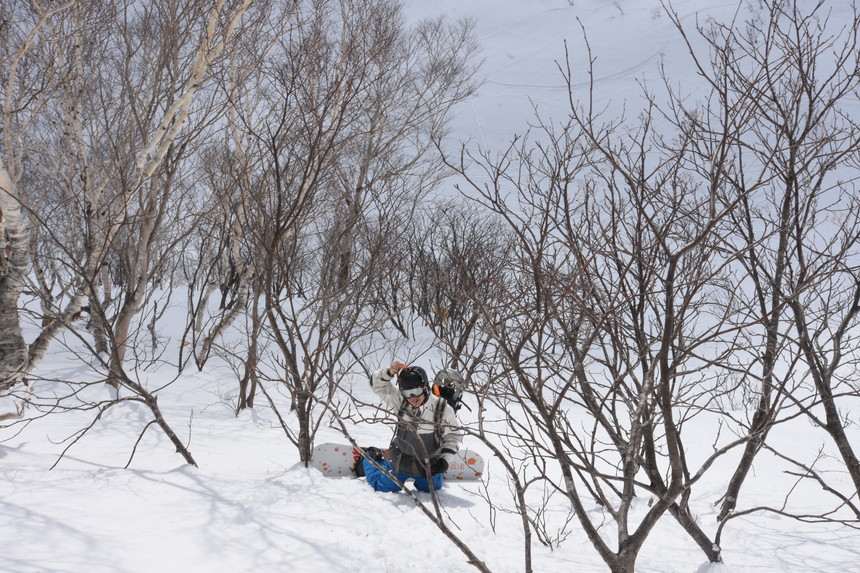 Sunset back in the Niseko Annupuri ski area: 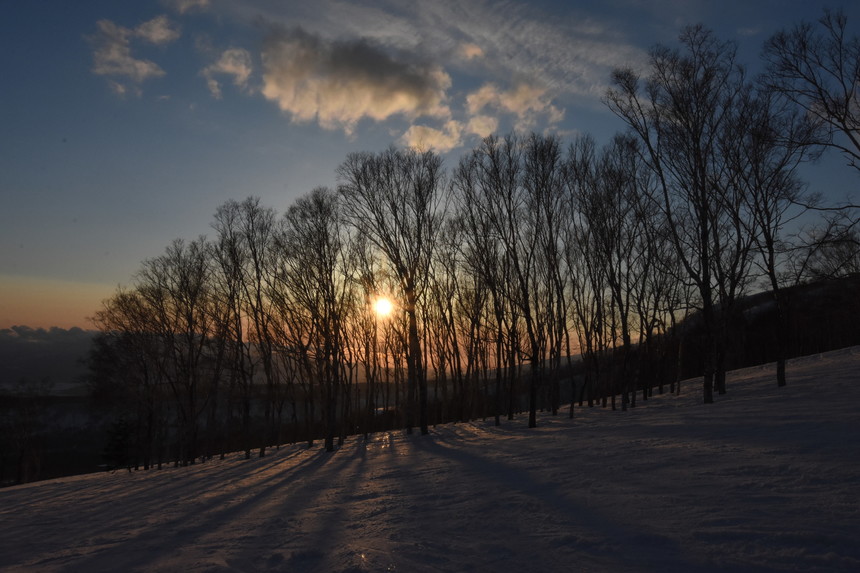 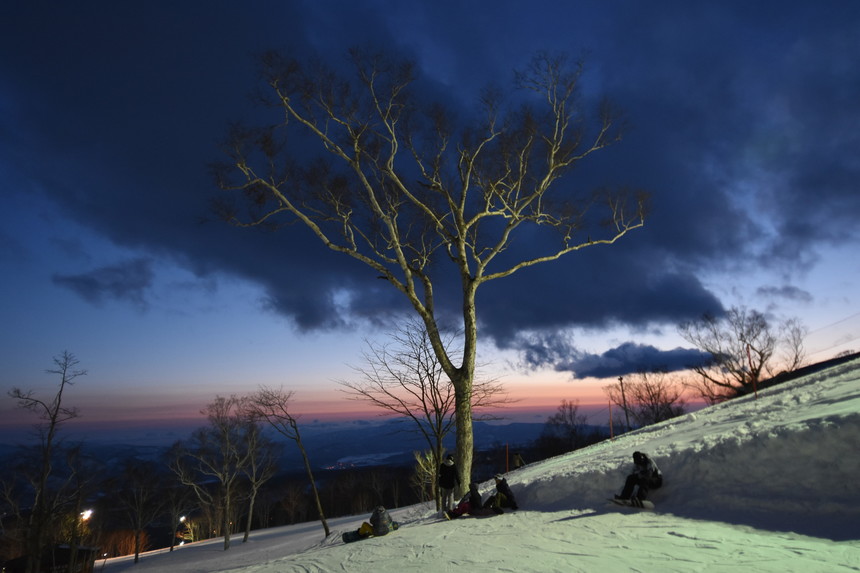