When it comes to skiers known for their predisposition to throw themselves at scary urban features, the trio of Clayton Vila, Sean Jordan, and Cam Riley shows up near the top of the list. Their 2015 documentary For Lack of Better exposed the raw emotion and carnage that goes into urban skiing, and solidified their position in the pantheon of urban skiers. These days, Clayton Vila has been spending more time behind the lens than in front of it, but found time last season for a trip to Norway alongside longtime co-conspirators Sean and Cam. We caught up with Clayton to learn a little more about the trip: 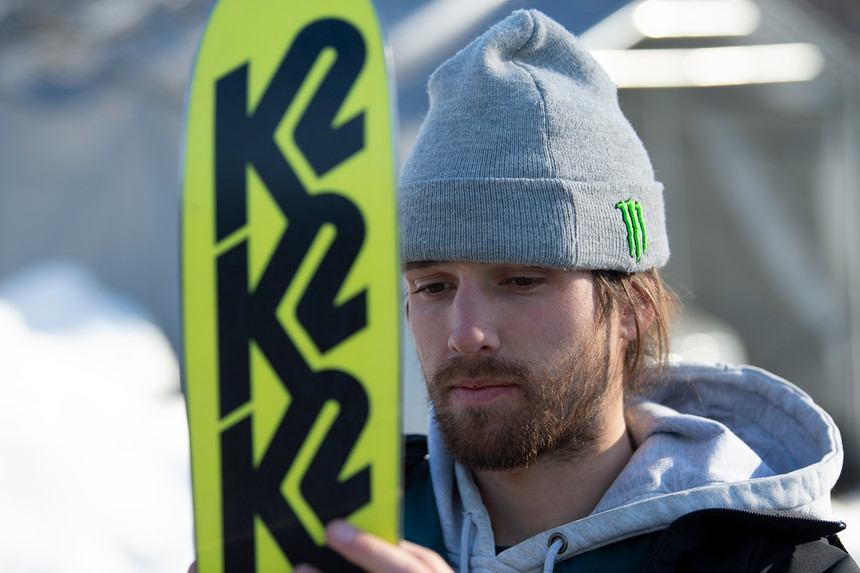 How are those edges looking, Clayton? Nic Alegre photo.

TGR: So, where’d you go this year?

Clayton: We went to Norway— greater Oslo would probably be the best way to put it. We started in Lillehammer and slowly moved south towards Oslo. It was springtime, so we were moving around as we got little flurries, and just doing our best to make it happen.

Clayton: It was minimal in the urban areas, but there was a ton of snow in the more remote, less urban areas. It ended up being almost entirely about finding good features in small towns, which is harder. It was a bit of a struggle in that respect, but we figured it out—we had a good crew and a lot of time, so we made it work.

TGR: Sean Jordan and Cam Riley, you guys have worked together a lot before?

Clayton: Yeah, we’ve been working together for over a decade now.

TGR: How was it to go on yet another trip?

Clayton: It’s kind of a reunion, as we all have our own lives now. We used to live together and ate every meal together, even in the off-season. In the winter we spent every damn day together, doing nothing but street skiing. That was just where our priorities and values were at that point in our lives. I’m still a professional skier, and it’s a big part of my life, but filmmaking is just as much a part of my life now, and same thing for Cam, even though we work in different areas of the filmmaking world. And then Sean is big into fishing these days, living in Denver and doing his thing. Cam is right down the road from me in LA, and we see each other all the time, but I don’t see Sean as much, and we don’t go skiing ever. Well, besides when we shoot with TGR, so every year it’s fun to do it and get the blood flowing again. 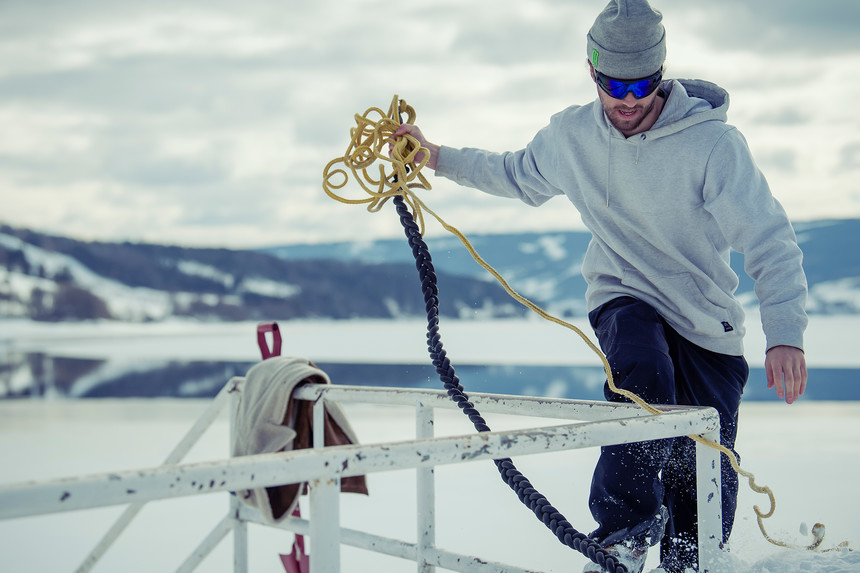 Clayton: It’s just the little things that make it feel like it is a reunion, make you miss it, and make you happy that you went out and did it. It’s not the skiing as much as it is all of the stupid other stuff that we’re doing. Whether it’s just driving around for so long looking for features or eating at the same exact restaurant every single day because it’s the one right there, we get into our little routines.

The little hiccups that you run into in whatever country you end up in are always funny. For example, there were no stop signs at all in Lillehammer. I’m pretty sure that there’s some sort of right-of-way system, but we didn’t know what it was, so we would just blow through intersections every time like idiots. We were probably doing it totally wrong, but it’s just little things like that that we really miss when we tell stories about the good ol’ days. Stories about when we’re staying eight people in a single hotel room, or something like that. It’s not as crazy anymore, but there are still little stories like that to be had.

TGR: What was the average Norwegian reaction to seeing someone street skiing?

Clayton: No one really cared, and that’s kinda generally how it is in Scandinavia, I’ve found. I’ve skied in Finland before, so I know that they let people do it. I guess they’re less intense about getting sued by people getting hurt on private property. But it also wasn’t something that everyone was doing in Norway, whereas in Finland it’s pretty popular. Norway isn’t a place where there are handrails everywhere, so it was a bit harder for us to find things. The general structure of rails was aluminum, or knobbed steel, which doesn’t work for us.

TGR: Just get the B-Dog Edgeless!

Clayton: Yeah! Cam actually ground the edges off of a pair of skis to hit one rail in particular. We had finally found a rail after days of searching, and then he jumped up onto it, caught, and fell like 15 feet to his back. We were like, “Huh, guess it’s aluminum. Totally thought it was steel.” And so he goes home, and we’re like “Well, this is the only rail we have,” so we bought a grinder and ground the edges off of his skis, just because that’s how desperate we were. That gives you an idea that it wasn’t the best place to do what we were trying to do. But we figured it out, and I think we found a decent amount of good features. 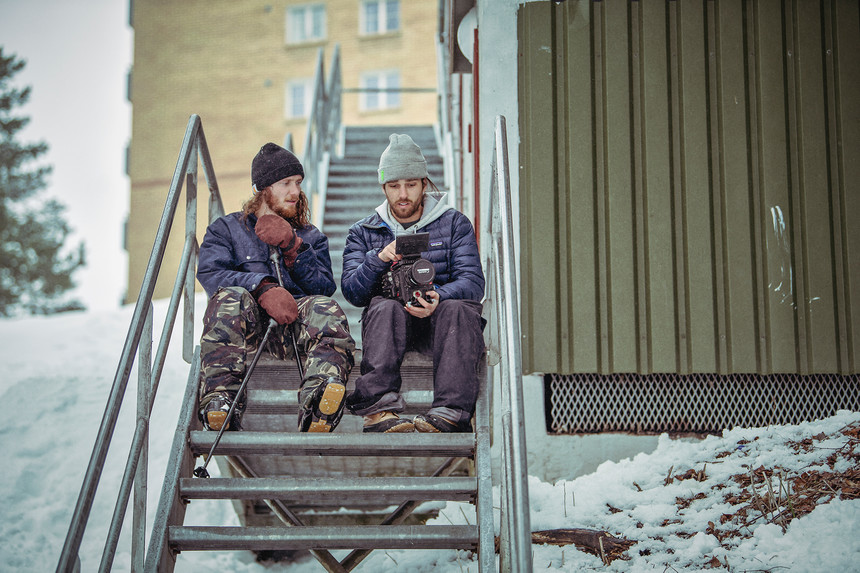 An on-feature meeting of the minds with Clayton and Cam. Nic Alegre photo.

TGR: Interesting. I would have thought that Norway would be a great spot considering how ingrained skiing is in their culture.

Clayton: No, Sweden and Finland are definitely better options for street skiers. We kind of saw that coming, based on what we’d heard from other people. We had seen hundreds of videos from Finland and Sweden, but very few from Oslo, so we knew that it might be a problem. But that was where we shot the segment for creative reasons—there were also people skiing big mountain in Norway, so that’s how we ended up there.

TGR: Were you the primary cinematographer for the segment?

Clayton: No, Cam and myself shared the directing role. As far as the work that we’re normally doing, it’s hard to really call yourself a director in that situation, but we were handling the overall creative concept as well as the camera and stuff. I operate a little more as a literal director, as opposed to Cam, who is a director of photography, or at least that’s how it works here in Los Angeles. Cam had a bit more of the hands-on camera work whereas I’m handling the overall creative concept and process, but with an urban ski segment it’s pretty straightforward, and we’re both kinda doing everything.

TGR: Any tricks that stood out in your mind?

Clayton: The last feature that I hit was a double-kink, that I wasn’t quite sure if it was a good idea or not because the rail was so narrow. It was the same rail that Cam and Sean both did tricks on, and it was a really narrow staircase, so you can’t fall onto the stairs or you’re going to run into the opposing rail, and that’s really bad news— you’ll get really messed up. When we used to do this all the time I was always willing to just tell myself “do not make that mistake, it’s just a non-option,” but these days, when you only do that once a year, it feels like a bit bigger of an event. That one rail, I actually thought “I won’t be able to get this because I’m really nervous,” but on the whole it’s really good to get the blood flowing and heart racing like back in the old days. And I got it, so that’s good. 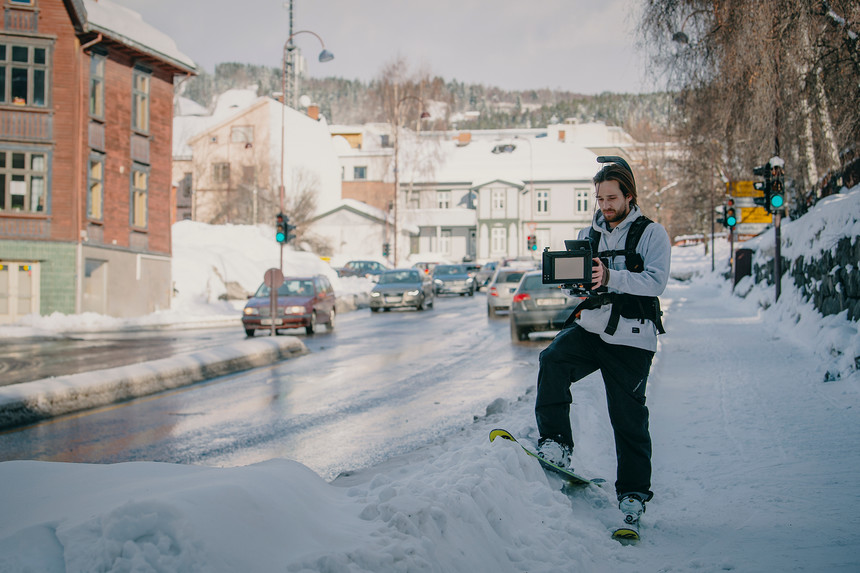 TGR: I remember watching For Lack of Better and thinking “These are the gnarliest dudes out there.”

Clayton: Yeah dude, we were in a different life stage for sure. We knew that it was worth documenting so that we could look back on ourselves and be like “What the fuck were we doing?”

TGR: That was five years ago now, right?

Clayton: Yeah, we filmed it during the 2014 season. Five or six years doesn’t sound like a lot in the grand scheme of things, but it’s a lot in the world of skiing. At the time, it was worth the risk in our minds, no doubt. Whenever we would run into a highly-consequential rail, it never crossed our minds to give up because of fear and danger. We would either hurt ourselves or complete the trick, and that was the way things were. It’s interesting how you go through different stages in life, and I still appreciate all of the adrenaline I get when I do this stuff, but it’s a different experience.

TGR: So it sounds like a major goal was to avoid injury?

Clayton: I would say it was the entire goal! A lot of the stuff that we do is just fun, and that still gets the adrenaline running. We found some features where we got some good tricks, filmed them well, and it was fun. Back in the day we’d be hitting stuff that was so gnarly and death-defying, like every spot that we hit, a very different animal. We just want to have a reunion and get the boys back out there, but by the end of it, when we get our feet back under us, we all are like “Let’s try some real shit,” and next thing you know Cam’s flying down a two-story building, Sean’s doing 630s, I’m hitting the dub-kink, and off we go. We always start out pretty mellow, but it gets competitive quick, and that’s what’s fun about it.

Last week, some of the world's finest rail skiers descended on Seven Springs, PA to compete in the inaugural Steel City Showdown, a rail jam hosted by the one and only Tom Wallisch. With $20,000 on the line, the event attracted everyone from Olympic gold medalists to unknown youngsters. The field was cut down to ten for finals, with a solid mix between well-known competitors like AHall, Colby Stevenson, Evan McEachran, and Alex Bellemare, and less known skiers like Tucker Fitzsimons, Bobby