The American Alpine Club (AAC), is proud to be announcing new membership options and proactive outreach with active-duty military and veterans. Following the advocacy that began as far back as World War II, with the famed 10th Mountain Division, the nation’s oldest climbing non-profit has big plans for 2019. This will manifest itself through discounted club memberships for service members, veteran-focused climbing events, and the promotion of wellness through climbing. It’s an initiative that came from within the AAC, particularly through the active duty members within the organization.

Things really got rolling in early 2018, when the AAC launched “Hill to Crag”, which meant to be a grassroots public lands initiative with elected public officials. Byron Harvison, who holds a chair in the Salt Lake Chapter, decided to push the event even further. As a life-long climber and active-duty U.S. Army Major, he viewed this event as a chance to share veterans’ experiences with climbing and public land with lawmakers. For him, climbing was a haven, especially after an intense deployment in Afghanistan. He’s witnessed countless people fall into mental illness and substance abuse post-deployment. Climbing, on the other hand, is a positive alternative that facilitates community engagement, a healthy lifestyle, and a greater connection to our public lands.

Major Harvison hasn’t stopped there. He has plans to roll out a new AAC Veteran chapter, and new special memberships to active-duty military and veterans to start in early 2019. Harvison was kind enough to share more of his story and how he has seen climbing be a positive impact.

Check out the full Q&A shared with us from the AAC:

When you take local, state and federal lawmakers climbing, what do you talk to them about?

“Hill to Crag” is an opportunity to educate policymakers and their staff about the importance of protecting public lands and the benefits of outdoor recreation for local and national economies. We’ve also been talking to them about the power of outdoors to heal invisible wounds, particularly for veterans.

Which of the events have been most memorable to you?

All of them are powerful. With each event we get first-timers; often political staff who don’t spend much time outside. Seeing them rope up and encourage one another is so cool.

But if I had to pick one, I’d say our Utah event at Joe’s Valley. Congressman John Curtis (R), his staff, Emery County officials, and the Utah Director of Outdoor Recreation were all able to join us for a great day of rock climbing. We were able to have a meaningful cragside chat with Rep Curtis about his bi-partisan Emery County Public Land Management Act and were able to suggest changes to the bill that would benefit the climbing community. Consequently, the legislation has evolved in support of the climbing community and the use of fixed anchors. His bill, H.R. 5727, is a small but concrete step forward in solving long-standing conflicts over public land.

After climbing, John shared a pizza with my kids.

You’re a busy guy: a father of four, an avid climber, and super-engaged AAC volunteer. You also have a serious career in the military?

I’m the State Staff Judge Advocate for the Utah National Guard. This May will mark 20 years in the military. I’ve been deployed multiple times in Afghanistan and Kuwait.

Coming back from my tours overseas, I felt a continued need to serve. When I saw what the AAC was doing with education, land stewardship and public policy, I wanted to get involved. It’s been gratifying to volunteer for a non-profit in the outdoor industry because I so strongly believe that outdoor recreation encourages healthy lifestyles and that we find solace in wild landscapes.

The Hill to Crag events I organize include military members and veterans. It’s a way to get the veteran community engaged and give them a seat at the table. It’s a great fit: a lot of veterans I know love taking people outside and helping them stay active and fit. 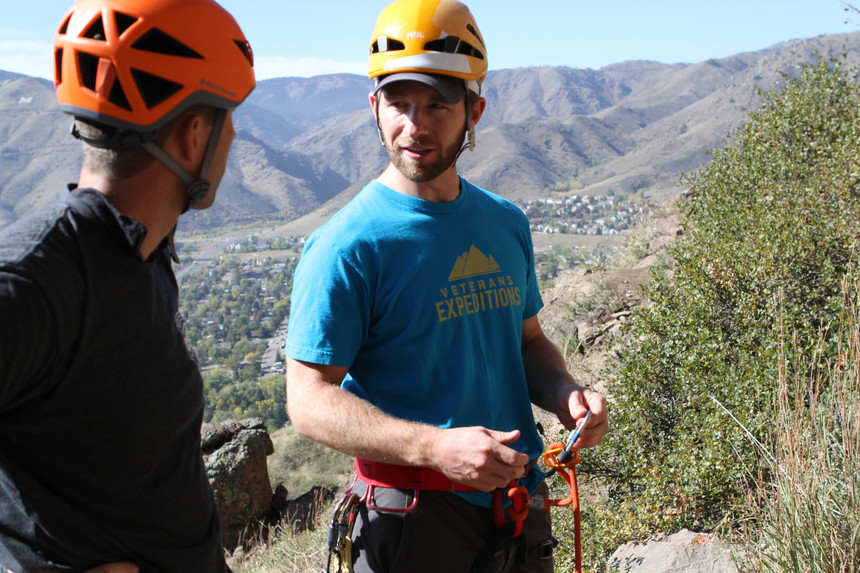 For many veterans, climbing is a haven after the intense experiences of combat. AAC Photo.

In your home state of Utah, public lands are hotly debated. What do you think the future holds for our wild landscapes and vertical playgrounds?

It’s hard to say. We’re at a tipping point where things could go either way. That’s why our advocacy work is so important right now.

I find it amazing that outdoor recreation is such a huge part of our GDP and how few people know that. The oil and gas industry has historically been much better at communicating their economic impact than we have. However, with Utah’s public lands at serious risk, people have come together in a powerful way. And now that the economic contribution of the outdoor industry is better accounted for, we’re learning to use our voice more effectively.

What keeps you going?

Helping protect something I love—access to climbing and public land—gives me tremendous satisfaction. It may be a by-product of a career in the military where we literally are asked to protect our country with our lives, but it also feels good and genuine to protect and share the magic of these wild landscapes with other veterans and future generations.

When did you start climbing?

I started climbing in 1993, during my first semester of college at Oklahoma State. I recall seeing an issue of Rock & Ice magazine while at a bookstore, which had a photo of these people on a portaledge, and I was hooked. I bought a copy of John Long’s How to Rock Climb and literally taught myself to climb by reading. I ended up climbing so often that I actually lost my academic scholarship that first semester! 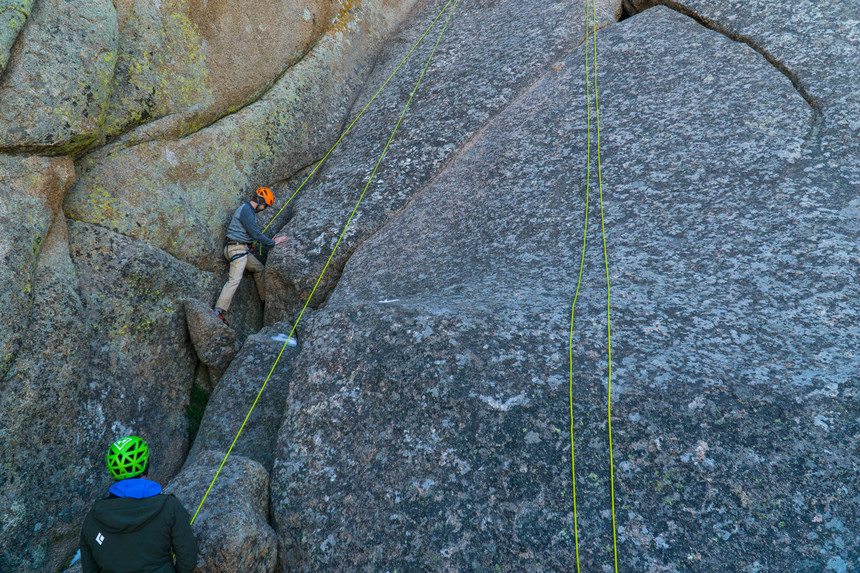 From the AAC veteran event in Vedauwoo, Wyoming. Dillon Parker.

Getting into climbing saved one of my good friend’s life. Post-deployment he turned to alcohol and drugs to self-medicate. He was going down that pretty worn path of getting into more and more usage, and harder stuff. He, on a whim, went climbing in Boulder's Flatirons and on top of the First Flatiron had kind of an epiphany. He really got into climbing, became heavily involved in outdoor rec programs helping veterans (starting a few), and now tours talking about the benefits of outdoor recreation for various treatments.

I think you are going to see more and more veterans get involved in outdoor advocacy, whether it be advocating for the use of rec to supplement treatment for dependency or PTSD, or advocating for public lands. Many vets have a continued desire to serve others, and they are a huge untapped resource.

The area surrounding Powell River, BC is home to some of the finest granite big wall climbing in North America, and also home to some of the last stands of old-growth forest in the region. Local climbers have long benefited from easy access to remote zones thanks to logging roads and generous land use policies, but have struggled with the choice to look away as pristine valleys are stripped for timber. RELATED: Check out the trailer for TGR's Accomplice Arc'teryx's new documentary  covers the

Dane Jackson has traveled around the world in search of whitewater to kayak, so when he says that a section of river is "about as narrow, committing, and epic as it ever gets," we'll take him at his word. Based on this video, we're hard-pressed to come up with a section of river that exists in the same league as the Rio Claro, much less eclipses it. RELATED: Check out the TGR Journal Vol. 1 The virtually impassible walls, waterfalls, and tight chutes present on this river make whitewater