Protect Our Winters has a long history of being outspoken in the struggle against climate change, and they continued that legacy yesterday with snowboarder Jeremy Jones, skier Caroline Gleich and climber Tommy Caldwell testifying before the Senate. In a hearing titled “The Fight to Save Winter: Pro Athletes for Climate Action,” before the Senate Democrats Special Committee on the Climate Crisis, the athletes shared personal stories and hard facts about how climate change impacts winter sports and outdoor recreation, and how that in turn harms the economy.

RELATED: Jeremy Jones Shares His Thoughts on the Teton Wilderness from Roadless

The athletes testified about how their personal experiences in the mountains and witnessing disappearing winters put them on the front line of the fight against climate change. Jones stated, “Living your life in the mountains doesn’t afford you the opportunity to deny climate change. Its impacts are front and center, every day. It was the incessant image of mountain environments changing, glaciers receding, snowpack declining, and seasons shortening that led me to start the climate advocacy non-profit Protect Our Winters in 2007. Though I’m comfortable dropping into a 60-degree slope, starting POW scared me. I had no formal experience in starting a non-profit. But, I was wholeheartedly convinced that the snowsports industry needed a unified front to fight climate change, and I was willing to stick my neck out in pursuit of turning passionate outdoor people into effective climate advocates. Besides, who better to take on this fight but a community who thrives in accomplishing the impossible?” 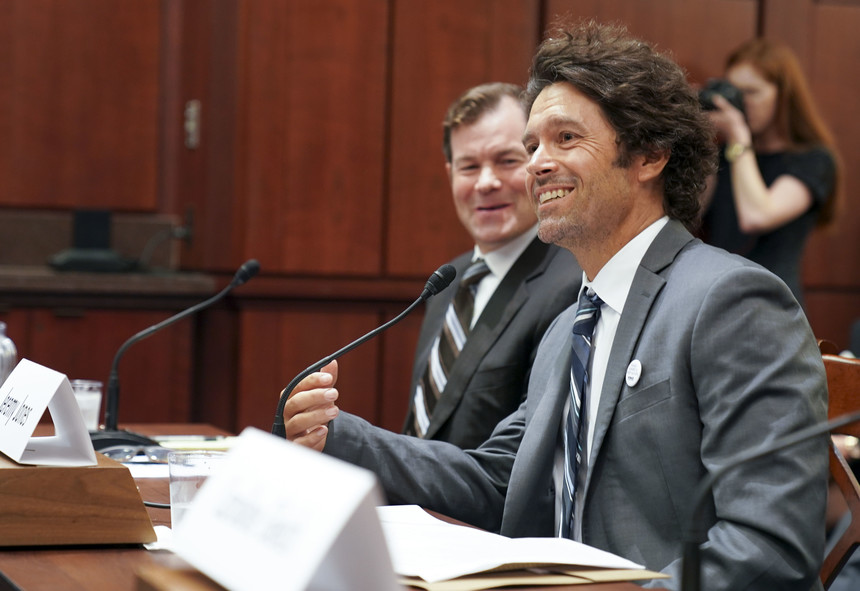 Gleich stated the need to legislators to pay attention to hard scientific facts and not just popular opinions, likening those to the information guides and mountain professionals use to make expedition plans. She said, “I am present today to give you such a report, and share that unfortunately, conditions are changing for the worse. Climate change is making both climbing and ski mountaineering more dangerous. I’m asking you to consider this field report as guides do– with the utmost scrutiny to select the best path forward. Fortunately, you have many options to take action to mitigate the worsening conditions.”

Caldwell shared an anecdote from a recent trip into Alaska's Arctic National Wildlife Refuge, a zone in the crosshairs of the fossil fuel industry. He said, “While packrafting beneath an eagle’s flight and hiking alongside families of caribou, I was constantly reminded of how this place is what the world could look like without industrialization. I believe we need to keep a few places set aside to be that reminder. I believe there are places too wild for fossil fuel extraction. Opening the Refuge to oil and gas development would not only irreversibly destroy the largest national wildlife refuge in the country–– and deeply impact the outdoor enthusiasts who seek adventure and solitude there––but it would also add significantly to the climate crisis at a time in which it is imperative to curb our emissions and adopt clean energy. I believe the Refuge should not be drilled and should be permanently protected not only for the protection of wild America, but for indigenous rights and future generations.”

Jones closed with a call to action, saying, “We are here today to demand progress on climate action. If, as lawmakers, you want to work with national influencers whose careers are dependent on a stable climate, look no further. If you want statistics as to how climate change impacts an outdoor retailer’s business bottom line, look no further. Our community is ready and willing to support your work toward a carbon neutral future. Because together, we can protect our winters, thank you.”

Avalanche mitigation efforts went awry at a Russian ski resort when a blast to loosen new snow slid into tourist facilities instead of into the trees as anticipated. The slide buried twelve people, six of whom have been rescued and an additional three are still being located. Four of the six rescued were injured in the slide and there was one fatality reported. Rescue efforts were carried out by more than 200 responders but have been hampered due to bad weather.  The avalanche occurred in