TGR’s latest snowboard film Roadless is finally coming to the big screen in Jackson Hole on 11/14.

Roadless follows Bryan Iguchi, Jeremy Jones, and Travis Rice’s split board expedition deep into the Teton Wilderness last winter. For Iguchi and Rice, the mountains around Jackson are still home, and they have spent years dreaming up a trip like this. This past winter, for the first time in their illustrious careers, these three snowboarding legends were united by a common goal: To trek deep into the wilderness of Wyoming in search of groundbreaking first descents in one of the most remote regions of the lower 48. This arduous journey through this winter landscape not only yielded world-class riding but allowed these three to reflect on their shared past and love of snowboarding in one of America's last wild places.

The film is showing at the Jackson Hole Center For the Arts at 6pm and 9pm on November 14, 2019. Tickets are $15, or $10 for ages 6 and under at the early show. Buy tickets here. Profits from both shows will serve as a benefit for the Bridger Teton Avalanche Center.

BTAC forecaster Bob Comey says that, “Thanks to TGR for supporting the Avalanche Center by hosting this premiere. Over 70% of each season’s operating costs are derived from donations or fund raisers like this. This funding pays for day-to-day operations, allows the Center to start the daily avalanche forecast earlier and push it later into the season, and allows the Center to make improvements to the avalanche hazard assessment products we post on our website and make accessible via smart phones.” 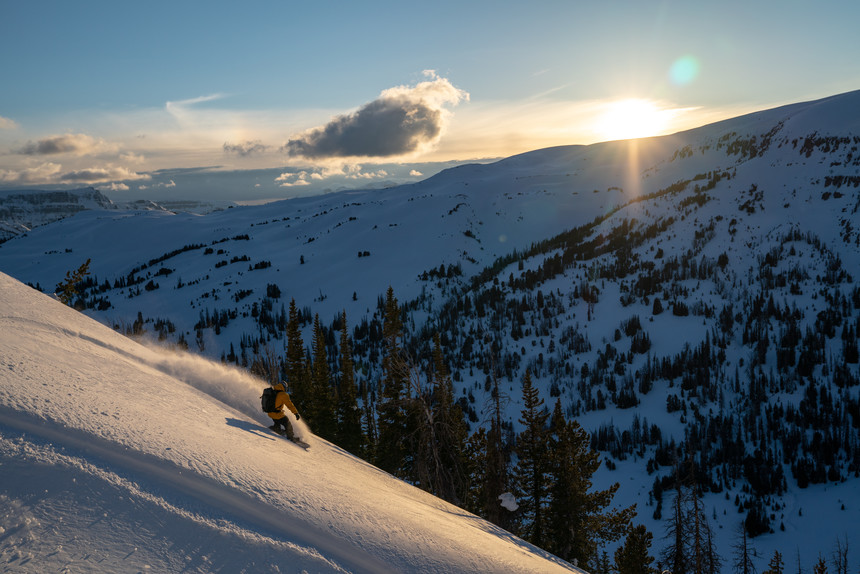 Bryan Iguchi shares a moment from a journal he kept from the trip:

The full moon lit the mountains with great detail dropping into the valley. As we descended deeper the walls steepened into a vertical channel with a massive cave. We didn’t dare to explore the predawn primordial landscape. It was a spooky route through avalanche paths crossfire. Its heavy spirit presence was felt by all. At the junction of the river, the terrain transformed into a deep ravine with massive pillows.

It was amazing. There were lines all around us. This was it. The dream was realized.

If you like skiing or riding in the backcountry, come out to support your local avalanche forecasters and watch some seriously rad snowboarding on the big screen!

Mi mix alpha is the latest concept of a smartphone that belonged to Xiaomi. The developer Xiaomi announced this upcoming newbie mobile technology system and now it is planning to release in further days.
<a >https://www.androidfreewares.com/</a>

please can you tell me I want to know tech news yesterday I found some site https://www.techvisionhub.com/ is it good or bad

please can you tell me I want to know tech news yesterday I found some site https://www.techvisionhub.com/ is it good or bad

People say, there is good in everything if you monitor closely. Yes! I agree! Now if you had asked me to agree on this 3 years ago I would have said “bullshit”. Where the good at being depressed? I wanna see the good at wanting to kill yourself, and Where can I find the good at losing everything but what you can only do is watch?
https://www.pencildiary.com

With over 100 Million Downloads Hago has received a lot of love from the players around the globe. Download and enjoy Games, Channels, Voice Chatting and have unlimited fun. Hago can be your getaway for all social and casual needs.

Peggo is an application that lets you record the audio from any YouTube video in MP3 and save it on your Android. You can do this with any song hosted on SoundCloud as well. https://www.peggopro.com/

Tech Free Zone is your home to read reviews and download apk of all the popular Android Apps and Games just for free. https://www.techfreezone.com/

Download the latest version of Apps for Android. All the best free apps you want on your Android are available to download in Droid Admin. https://www.droidadminapp.com/

Downloading apps for Android from Morph is a simple task and it is safe. All the Android APKs and programs downloads are at your finger tip. https://www.morphtvapk.com

XAPK Installer is an app that you can use to install .xapk files to the Android smartphones and devices easily. This app is freeware so you can download it for free.

Flipaclip Apk is an interesting drawing tool that can download for your smartphones and pc devices easily. This is the best way to creating stories.

Yes player Apk is HD video player mainly for Android devices, it can play all the types of HD video formats and tons of other video formats.

Remini Apk is an app for restoring old photos in a matter of seconds. Thanks to the latest artificial intelligence, restoring blurry, old, and low-quality photos is now a piece of cake.

If you’ve spent any time in a liftline this winter then you’ve probably noticed skiers and snowboarders rocking buffs, headbands, hats, and face masks in all kinds of fantastical colors and patterns. That my friend is the work of Skida, who’s garnered a cult following in the outdoor industry over the last few years. Despite their growing popularity, Skida’s origins are rather humble and began with a pair of cross-country skis in a quaint Vermont town. The story goes that the company’s founder

For Jeremy Jones, the intersection between snowboarding and climate activism has literally become a way of life. In the latest episode of See Change Sessions (a series exploring sustainability in the outdoor industry), Jeremy grabs a Sierra Nevada and chats with his brother Todd Jones, co-founder of Teton Gravity Research about taking lessons he’s learned in the mountains back into his professional life. As founder of Jones Snowboards and Protect Our Winters, he’s got his work cut out for