Yeah we know we’ve been slacking a bit in keeping you updated on all the racing mayhem going down in Canada for the Crankworx Summer Series, so here’s a full-on recap of what went down during week two at Kicking Horse Mountain Resort, with high-stakes racing on some of Canada’s gnarliest tracks. It was a true test of skills and bikes, with some surprise names coming out on top.

Downhill racing phenom Finn Iles might have a knack for enduro racing, it seems, after he won his second race in a row at Kicking Horse, smoking the men’s field (mostly made up of pro enduro racers). On the women’s side, Andreane Lanthier-Nadeau showed her prowess as one of Canada’s fastest yet again, beating out her friend and rival Miranda Miller.

While heavy rain made the dual slalom course a mudpit, it sure did provide for some exciting racing moments, leaving Lucas Cruz and Vaea Verbeeck on top.

With a name like Psychosis, it’s no surprise that Kicking Horse’s downhill track is one of the gnarliest in the world. It hasn’t been raced in over a decade. The track drops nearly 4000 feet over 4.5 miles, includes a timed uphill hike-a-bike section, and has been home to lots of classic race moments that have gone down in MTB lore. Racer Georgie Astle recalled, “The hike-a-bike hurt my body and my soul.” In the end, Henry Fitzgerald and Andreane Lanthier Nadeau stood atop the podium. 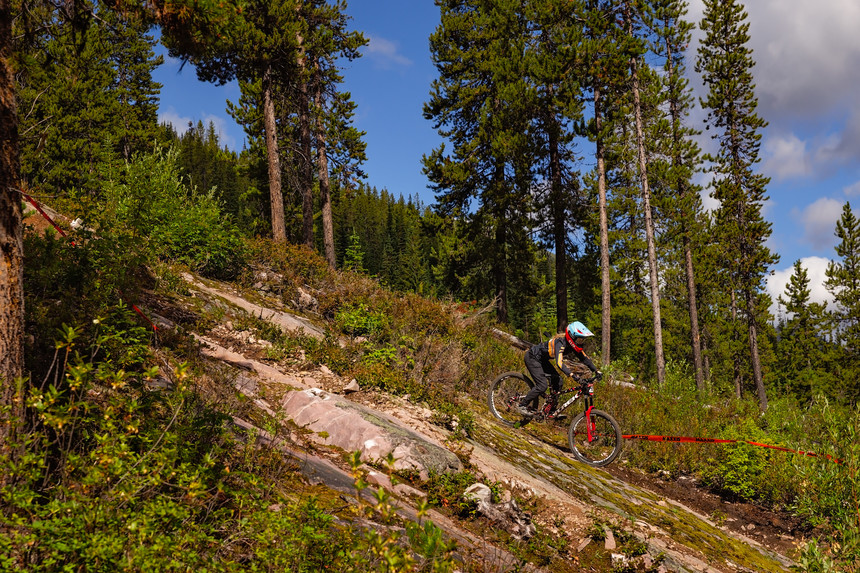 After one of the gnarliest racing days of their lives on Psychosis, the riders were in for another treat: a second DH race on a whole new track. In the end, enduro veterans prevailed, with Casey Brown and Jesse Melamed atop the podium.

Ever wonder exactly what it takes to do tricks like Brandon Semenuk or Paul Genovese? Well, you could watch and re-watch footage of their riding – or you could just watch it all in extra slo-mo to fully understand the intricacies of things like flip-whips with extra barspins thrown in for good measure. In other words, the riders use their bikes as a paintbrush to create lines and shapes like only they know how. RELATED: Stream Accomplice in Full on TGRtv and Other Platforms Now TGR’s

Josh Bryceland Has A PSA: Please Clean Up Your MTB Trails After Shredding!

Josh Bryceland Has A PSA: Please Clean Up Your MTB Trails After Shredding!

Josh Bryceland’s English might be a little tough to understand sometimes, but his message here is clear: as mountain bikers, we need to remember to do our part as trail stewards and help clean up the woods! After one of his favorite local riding spots got pretty trashed by heavy use this summer, Ratboy was bummed by what he found while out riding. So he took it upon himself to do his part and clean up the woods, picking up all manner of garbage along the trails. RELATED: Accomplice Trip

VIDEO: Behind The Scenes of Brandon Semenuk’s Accomplice Segment

VIDEO: Behind The Scenes of Brandon Semenuk’s Accomplice Segment

When it comes to creating truly standout pieces of mountain bike cinema, it’s not just about the talent in front of the camera – getting shots like those found in took some pretty nifty movie magic. Thanks to our friends from Peacemaker Filmworks, a camera outfit based in Vancouver that takes over when “getting the shot” turns into an engineering problem, we were able to capture Brandon Semenuk and Paul Genovese like never before. Peacemaker brought lots of high-tech toys, including FPV