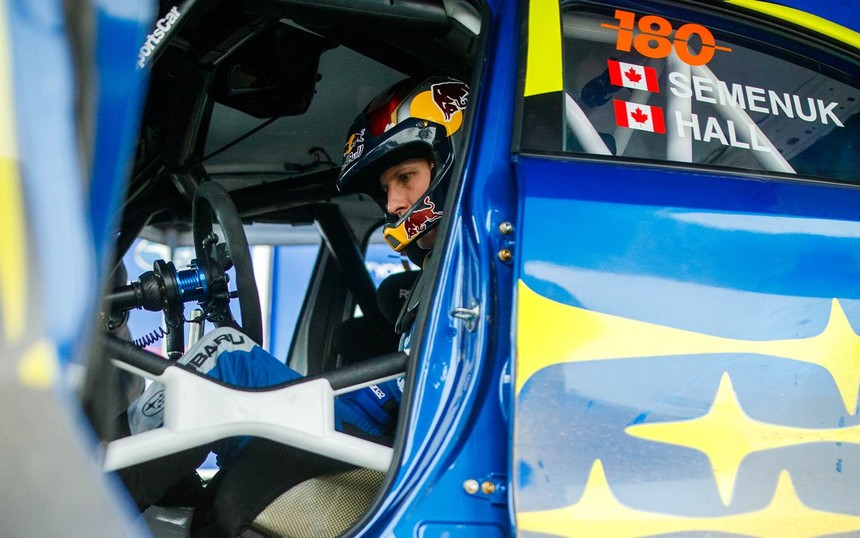 It might be Semenuk’s first full season as a rally car racer, but under the tutelage of five-time national rally champion Pastrana, we’re sure he’ll be in good hands. From Subaru:

British Columbia native Brandon Semenuk has been putting his mark on rally in the U.S. and Canada since 2010. Competing first in a production WRX and then in a Subaru Canada-supported Crosstrek rally car, Semenuk has racked up five overall Canadian Rally Championship (CRC) event wins and a pair of North American Rally Cup (NARC) titles in the last three years. His achievements in U.S. events include an impressive 4th overall at Idaho Rally in 2018 – competing in a UTV against bigger, more powerful Open 4WD Class cars – and another 4th place finish in a privateer car at 2019’s Oregon Trail Rally with co-driver John Hall.

Enrico Veronese didn’t let the living nightmare that is currently Northern Italy prevent him from pushing the limits of his sport. With strict orders to remain inside to prevent the spread of Coronavirus, Veronese put up a bold first ascent of a new route. The new climb, is rated at 55° E5, M9, 5.14a, making it one of the hardest of its genre (whatever that genre may be). It even included a ski descent of his driveway and a bivy on a sketchy ledge (READ: his balcony.) RELATED: Stay

If you're looking for a sport where the main goal is to get close to death without actually dying, proximity wingsuiting is hard to beat. That said, we can't keep sleeping on proximity speedflying, which clearly approaches, if not eclipses wingsuiting's inherent sketchiness. RELATED: Proximity Wingsuiting in the Alps How much is risking your life like this worth? $22,222 USD, based on evidence provided by this GoPro Million Dollar Challenge-awarded video from Kiwi speedflyer Angus Sellen. For

Relax with this Stunning Reel of the Ashley National Forest

Relax with this Stunning Reel of the Ashley National Forest

We could all use a little break right now. From the endless news cycle. From the constant disinfecting. And most definitely from the passive-aggressive toilet paper hoarders at the grocery store. More than anything, a little R&R in nature right now wouldn’t be too shabby.  RELATED: Stay Stoked - Your Guide to TGR's Best Content But if you can’t leave the house we’ve got the next best thing for you. More Than Just Parks just released their latest episode, featuring the breathtaking Ashley