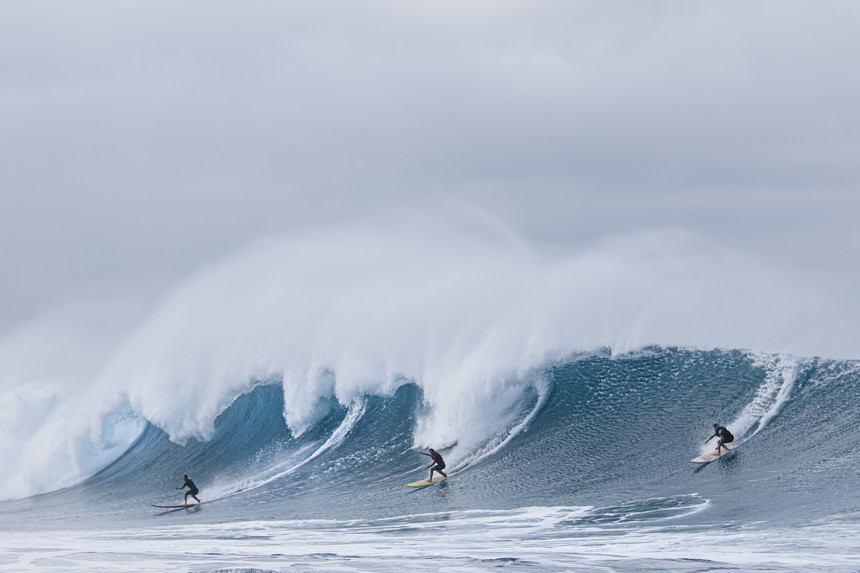 If there was any time to say that women in extreme sports are having their moment, it’s now. In the last year, maybe more than ever, women are seeing their own events, their own categories, and more recognition in general. In women’s surfing, we’ve seen films such as Girls Can’t Surf and collectives like Textured Waves elevating and bringing together women in the ocean. But the surf industry hasn’t always been this way for women, especially not when it comes to surfing big waves. Big wave surfing originated in Hawai’i in the 1940’s but was largely considered a “men’s sport.” As the sport grew in popularity, certain breaks around Hawaii became iconic spots for big wave surfing-- and women were out there trying their hand at swells like Waimea Bay. These women were met with harsh criticism from the surf world. People said they were trying to be too masculine and the narrative that women should be on shore in a bikini cheering on the men became even stronger. Surf competitions offered no change from this attitude. Many had no women’s category because organizers felt these big breaks were too scary and dangerous for women to be surfing them. If by some chance women were invited to surf in competition, the prize purse was only a fraction of what the men were given. Surfers like Keala Kennelly and Bianca Valenti have fought hard for equity in women’s surfing and are only just beginning to see their efforts paid off. But this year, Red Bull stepped up to the plate and put on Magnitude, an all women’s virtual big-wave surf competition with a $25,000 prize going to the overall winner and several other cash prizes for different categories. The contest ran from December 1, 2020 to February 28, 2021 and took place across iconic Hawaiian breaks such as Jaws, Waimea Bay, and the North Shore with consistent 15-foot swells as a defining requirement. Red Bull sent film crews out with each surfer throughout the season, but each competitor was allowed to film on their own and send in their footage to be considered.

The event featured both a people’s choice category for the public to vote on as well as a roster of well renowned judges. The judges included Betty DePolito who was one of the first women to surf Pipeline, big wave champions Kai Lenny and Mark Healy, and Surf Poll winner Rochelle Ballard. A winter of historic swells provided for the women of Magnitude to show off their best surfing, and ultimately, Keala Kennelly was crowned winner. While Keala Kennelly walked away with the grand prize, it’s clear that every woman involved gave her all to the event. We had the chance to chat with both Brazilian surfer Raquel Heckert and Kauai local Kaya Waldman about Red Bull Magnitude and their experience as part of the historic event. 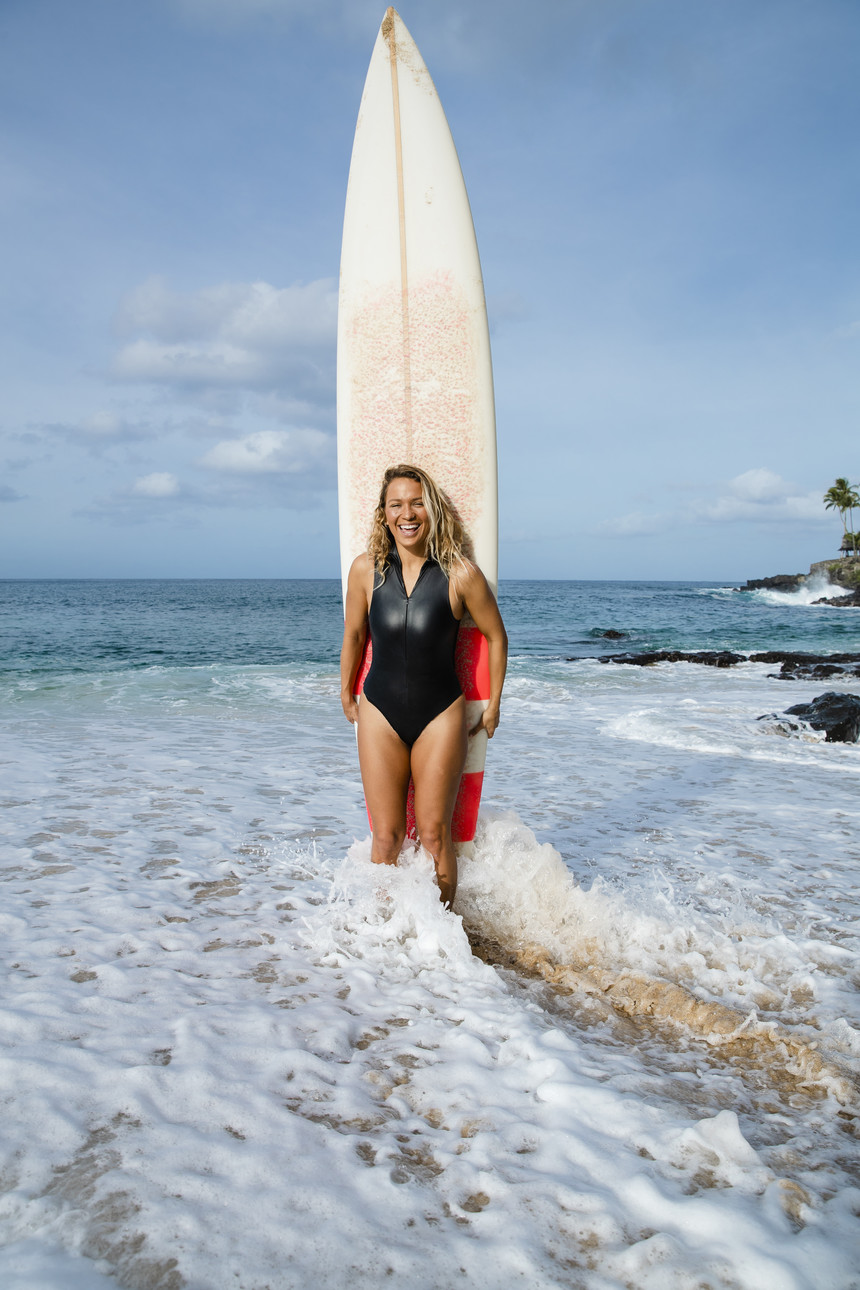 Heckert poses with her board. RedBull Content Pool photo.

Heckert was born and raised in Rio De Janeiro, Brazil. She first became interested in big wave surfing at 15 years old. Her path to surfing was unconventional, considering her family didn’t really surf and she didn’t have any fancy boards or a coach to help her get started. However, the beach near her house was one of the heaviest breaks in the area and acted as a motivator for Heckert to get out and start surfing bigger swells. When she was 18, her grandfather took her to an even bigger swell in Mexico. The waves there were similar to the one’s she’d surfed at home, only bigger. After that trip, she did everything she could to return to Mexico every year to surf. It dawned on her that chasing barrels around the world was how she wanted to live her life. After turning 21, she finally made it to Hawai’i to surf for the first time. She’s now lived there for six years. In light of the pandemic and her recent marriage, Hawai'i has become more and more of a solid home base for Heckert who used to spend much of the winter traveling to surf.

Heckert is a deeply driven individual. “I was mostly on my own learning to surf,” she said, “I think it was the curiosity of knowing how things work, how people survive those conditions and surf bigger waves.” Every aspect of watching people at her local beach had Heckert enthralled with the thought of getting better at surfing and pushing her limits. Even without the right board, she’d go out and surf until her board broke or she was too tired to keep going. Pushing herself back home made Heckert’s first year in Hawai'i that much more lucrative and she was surfing Waimea even back then. After spending the last few years surfing Hawai'i's huge swells, Heckert was more than prepared for Magnitude. “It’s normal for me to go every swell and I always try to do my best, but now I had the competition so I pushed even harder,” she said of Magnitude’s long format. “My husband helped me film every swell too, so when Red Bull wasn’t filming and I’d get a wave, we’d send that to them too. We went to Phantoms, and I got a crazy left, that was sick. And we went to Jaws, and to Waimea. Even on the first day of the year, I was there at seven in the morning just to get the swell.” Heckert surfed eight hours a day all winter just to get as many good waves as she could. While she was already an impressively motivated surfer, Magnitude offered her a new dose of excitement and inspiration to catch bigger waves. 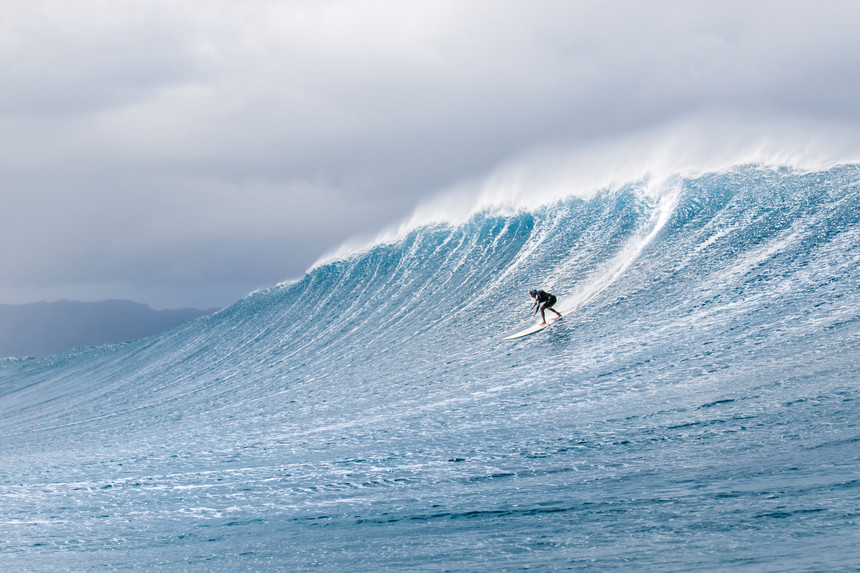 Kauai local Kaya Waldman started surfing at 11  years old when her uncle took her to a river mouth to catch her first wave. He told her she couldn’t surf ocean waves until she first stood up on the 12-foot soft top board in the river. Once she’d caught her first ocean wave she was completely hooked on the sport. Since then, Waldman has found a strong community of female surfers in Kauai, which was amplified with Magnitude’s presence on the island. “It was a huge community of women who like to surf--not only surf-- but big waves, and they’re the coolest people I’ve ever met and are very supportive. Everyone is building each other up and pushing each other,” she said, smiling. Not only was Waldman excited to be integrated into such a strong, positive group of women, but also that a high profile company like Red Bull sought to highlight and uplift women in surfing. Being the youngest competitor, Magnitude gave Waldman an incredible chance to connect with other women surfers who acted as role models and mentors to her.

The format of Magnitude was unique in that it lasted all winter, rather than just a couple days. Heckert found both ups and downs in the winter-long video format. The format gave the competitors all winter to get waves, which provided ample opportunity for the athletes to perform at their best. But on the flipside, the volume of content the riders were giving Red Bull made it hard to get every wave caught out there. Sometimes the videos they sent Red Bull wouldn’t make it in time, so unlike a normal surf competition, not every wave made the cut. Heckert worried that people couldn’t see how hard she’d worked all winter just based on the video footage Red Bull provided the public. For Waldman, it meant having more time to surf, but also being on top of her game for more of the winter. “I wish all surf contests could be like that,” Waldman said, “it was so cool. For me, I’m not very competitive so it was cool to just be able to surf and then it counted towards the contest. To have water safety for each big swell and to have filmers, that was super, super rad that Red Bull did that.” 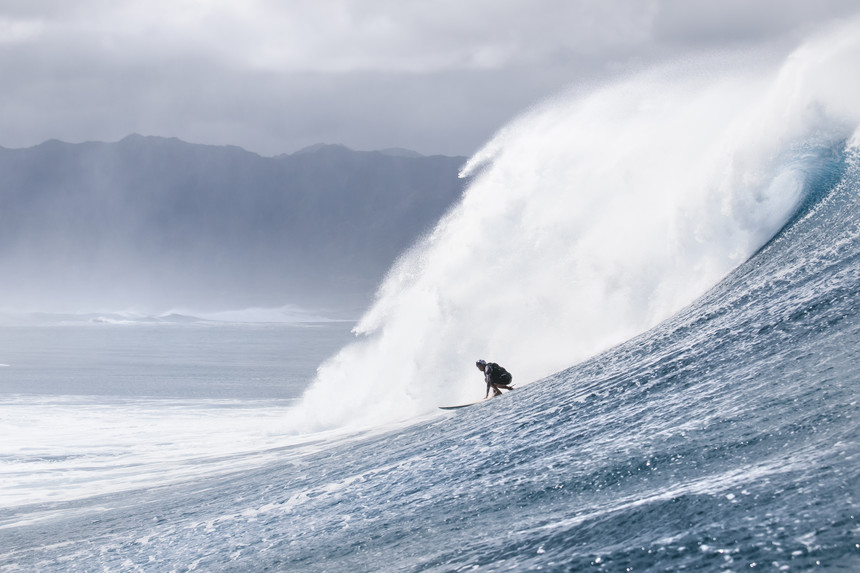 Regardless of contest format technicalities, Waldman and Heckert feel that having a high profile event like Magnitude that is all-female provides inspiration for the next generation. “It opens up the eyes of the next generation to see that they can do incredible things, charge, get big waves, and surf like a woman! Women can get big waves and represent our gender as strong athletes and beautiful too. I’m very thankful to Red Bull for putting on this contest,” said Heckert. Waldman similarly saw it as a light for not only women in surfing, but other sports as well, given the support from a company like Red Bull. “They gave the women so much exposure, so much support, and a lot of prize money. They really took a chance on us and supported us in what we did, so I think it was really honorable that they did that, and I was very honored to be a part of it.”

TGR might be rooted in winter sportsbut we sure like to get out into the ocean as well. I mean we’re pretty much just surfing big white waves in the mountains too. Across the surf world, we’re always impressed by what mother nature can throw at us, including some boat-destroying waves, some crazy heavy rides, and the peace and quiet of nice long paddleboard sesh. On top of that, it’s the skill and mind-blowing athleticism from athletes like Alex Botelho and Kai Lenny continue to keep us

Have you been feeling stressed? Maybe a little out of sorts? Like you just need a minute to chill out? Well now you can take four whole minutes to chill out with the help of Brandon Kuzma's new film . Follow Kuzma and his 16mm camera down to Baja for some good vibes and pretty sweet surf lines. The film features Tony Masters, Currie Wagner, and Justin Villano riding waves and providing some strong feels. This short film will help you breathe in the salty, ocean air of Baja and escape whatever