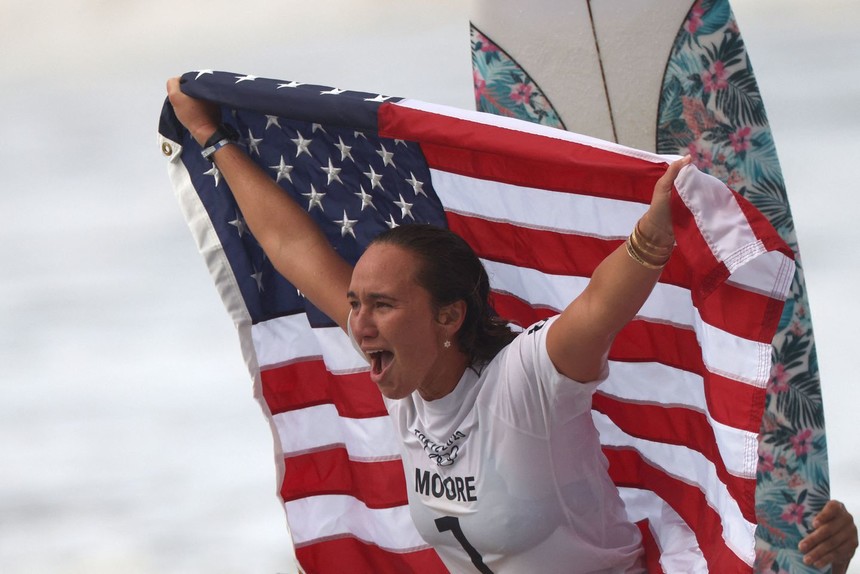 Tokyo was not messing around when they added skateboarding, sport climbing, and surfing to the Olympics this year, opening new doors for the action sports community. The surfing competitions wrapped up today with the first ever gold medals given to the winners of the male and female shortboard events. Among the two recipients was American surfing legend Carissa Moore, who is no stranger to creating magic on wild waves. The prodigal wahine was the youngest person to ever win the WSL World Tour Champions at age 18, and put three more World Tour Championships under her belt winning again in 2013, 2015, and 2019.

Moore was inducted to the Surf’s Hall of Fame in 2014 and continues to develop her legacy as one of the greatest surfers of our generation. This reputation followed her into the 2021 Tokyo Olympics and you best believe Moore did not disappoint. Although the wave and wind conditions were not ideal, Moore was able to rip through tricky sets, defeating South Africa’s Bianca Buitendag in the final: 14.93 - 8.46. Also making history, Brazilian Italo Ferreira took home the gold for the men’s shortboard event, defeating Japan’s Kanoa Igarashi 15.14 - 6.60.

Kelta O'Rourke, Raquel Heckert, and Michaela Fregonese party surf a wave. RedBull Content Pool Photo. If there was any time to say that women in extreme sports are having their moment, it’s now. In the last year, maybe more than ever, women are seeing their own events, their own categories, and more recognition in general. In women’s surfing, we’ve seen films such as Girls Can’t Surf and collectives like Textured Waves elevating and bringing together women in the ocean. But the surf