During the height of his career, three-time world champion surfer Andy Irons quietly battled with bipolar disorder and opioid addiction throughout his life - demons that millions of people worldwide combat daily. As the opioid crisis rises to a national emergency in the United States, the untold story of Andy’s life serves to tear down the myths associated with these two ferocious diseases. This Saturday, October 10 marks World Mental Health Day, and the Andy Irons Foundation and Billabong are hosting a Surfing the Second Wave film screening, panel discussion, and virtual fundraiser to honor the date. Join us at 4:00 pm EDT on October 8 to catch an exclusive screening of TGR’s 2018 film Andy Irons: Kissed by God, followed by a round table discussion on mental health hosted by none other than Selema Masekela and key personalities from the film including Lyndie Irons, Evan Slater, Joel Parkinson, Dr. Andrew Nierenberg, and Greg Horne. Finally, the evening will conclude with a live Andy Irons tribute concert by Metallica. Register for the event here.

Personally, I think talking and being open about mental health is so important. We should all be educated and try to get as much information as we can because it can easily happen to someone close to us. And having community awareness for mental health reduces stigma that surrounds it. We will be discussing mental health with experts and my dear friends that I have known for decades that were also very close to Andy. I think it will be a softer conversation on a very serious issue. And forever honoring Andy's legacy in the best light.

The event is also supported by Bozeman's Montana Ale Works, who are hosting a Hawaiian night in honor of Andy. 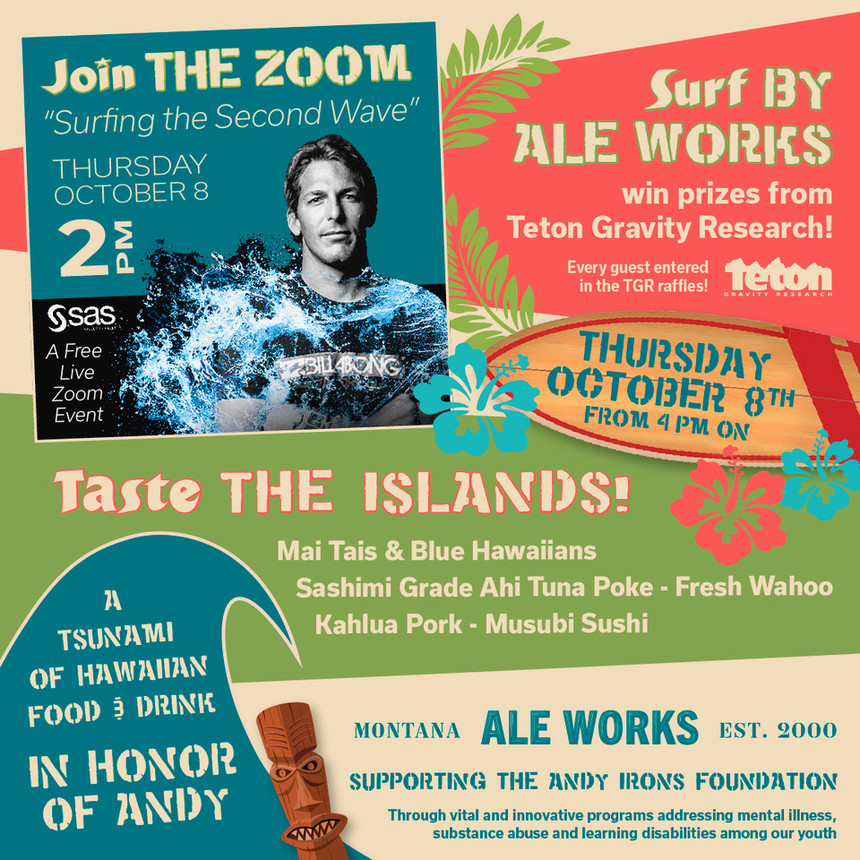 Teton Gravity Research's Andy Irons: Kissed By God is a documentary film that focuses on the true, untold story of one of the world’s most prolific surfers. The intent of the film is to show the unfiltered life of Andy Irons, one that was filled with energy, passion, success, and challenges. Challenges that pushed Andy to the brink and were both the best parts of Andy and the hardest to handle. TGR co-founders Steve and Todd Jones wanted to create a film that captured the true essence of Andy Irons - his family, his friends, and those who later realized a friendship that at times was hard to understand. The film features in-depth interviews with Andy’s brother Bruce Irons, his wife Lyndie Irons, Joel Parkinson, Nathan Fletcher, Sunny Garcia, and Kelly Slater. Andy’s friends, family, and competitors share their stories of intimacy and fire with Andy Irons throughout the film. The unabashedly honest testimonials compel the story and reveal the very real side of Andy. This is not a film about surfing; this is a film about a person that lived life to its fullest at the top of his industry, but did so facing insurmountable internal challenges. This story is about everything that made Andy Irons the man he was.

The Andy Irons Foundation exists to help others with some of the personal challenges Andy never addressed himself. Started in 2011 after the untimely passing of three-time world champion surfer Andy Irons, the Andy Irons Foundation exists to help provide the support network that doesn’t exist for so many of our youth. Focusing on impactful community based programs around the youth of Kauai along with all of the Outer Islands, the Foundation is just getting started. A lot of exciting things are coming up and you can stay tuned and follow what is happening on https://andyironsfoundation.org! By focusing on impactful, community-based programs that address debilitating conditions like mental illness, addiction and learning disabilities, the goal is to create a world where no child struggles alone. The Andy Irons Foundation is a fiscally sponsored project of Community Initiatives.

Register for the event here.

I should express that I like this article so a ton and moreover using it in regular. I believe you would continue sharing better than average article here.
cookie clicker

Have you been feeling stressed? Maybe a little out of sorts? Like you just need a minute to chill out? Well now you can take four whole minutes to chill out with the help of Brandon Kuzma's new film . Follow Kuzma and his 16mm camera down to Baja for some good vibes and pretty sweet surf lines. The film features Tony Masters, Currie Wagner, and Justin Villano riding waves and providing some strong feels. This short film will help you breathe in the salty, ocean air of Baja and escape whatever