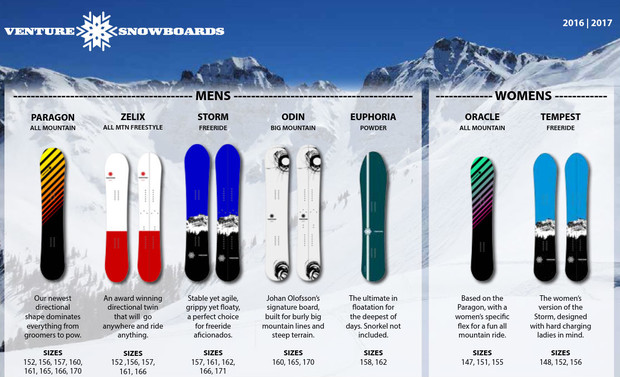 Last season, one of the most beloved board manufacturers in the businesses, Venture Snowboards, unexpectedly shut down production at its Silverton, CO factory. The announcement shocked most of the snowboard industry, including Venture's diehard following of big mountain riders and splitboarders.

The press release from co-owner Lisa Branner read, "Venture Snowboards has encountered some challenging terrain in recent months. Circumstances beyond our control have forced us to make a tough decision. We will not be delivering any boards to market for the 2015-16 winter season."

Speculation disseminated about production costs and small profit margins after the worst snow year in living memory. However, both Klemens and Lisa Branner, the husband-and-wife team who conceived the idea of a environmentally focused, big mountain snowboard company as powder-chasing students at Colorado State University, made no definitive comments about why Venture ceased production. Nor did they confirm whether or not Venture would return in the future.

Now, the Branners and Venture Snowboards have announced that they are planning an official comeback with a new line of big mountain decks and splitboards for 2016-17. For the first time ever, they will be releasing two female-specific boards, the Oracle and the Tempest. They'll also be making a new all-mountain board called the Paragon.

Note: If you are headed to SIA, Venture Snowboards will not be exhibiting. However, you can stop by the Spark R&D booth to let them know how happy you are to hear this news. You cannot order their boards just yet, so chill.

Here are the amazing article to all web users need to getting more settings windows 10 and access the all way of system update for the batter working online thanks.

Venture Snowboards, unexpectedly shut down production at its Silverton, CO factory. The announcement shocked most of the snowboard industry, including Venture’s diehard following of big mountain riders and ...  https://routerlogin.ink

Always wanted to go snowboarding. The weather doesn’t suit it, though. Thanks for the great article - Mattress Disposal Canberra

Thank you for this information. Good lock Venture for your comeback.

Awesome to hear this is coming back.

The storm board is sick

Drywall repair in Atlanta, GA Great blog! I found some interesting things here that I might use for future references. Hoping to see more of these posts in the future!

You completed a few fine points there. I did a search on the subject and found nearly all persons will go along with with your blog. drywall patch

I’ve been searching for some decent stuff on the subject and haven´t had any luck up until this point, You just got a new biggest fan! concrete foundation contractors

This one is good. keep up the good work! New York Roofing

Its amazing how little we think about how companies shutting down or not producing the same supplies can affect our hobbies and activities. I hope they continue to make top notch snowboarding gear.

Tony - Owner of photography for homes in Brisbane

Great post, you have pointed out some fantastic points , I likewise think this s a very wonderful website. vehicle recovery bristol

Good on them for returning. Must be tough to make a decision like that.
Braden | handyman services Albany NY

I was very encouraged to find this site. The reason being that this is such an informative post. Thanks for sharing!
https://cairnskitchenrenovations.com/