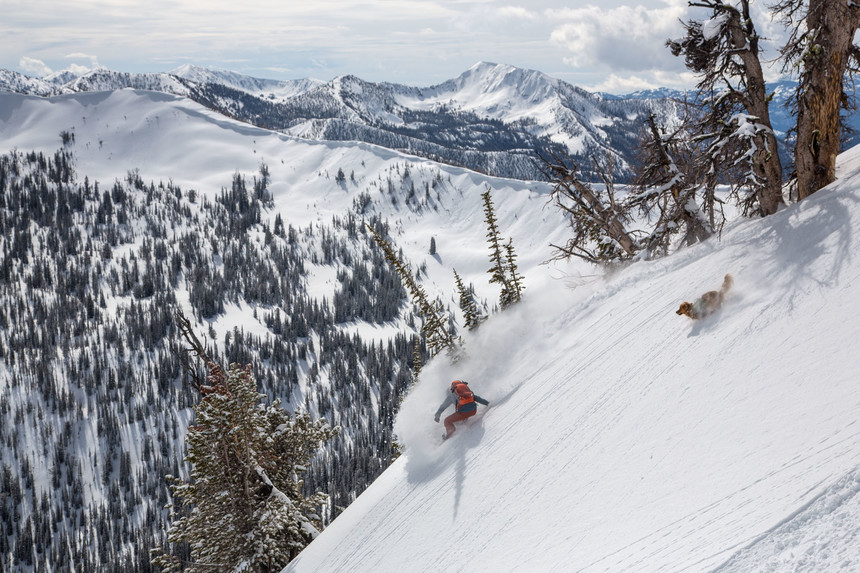 Andrew Muse decided to start living life on wheels on a whim. It turned into a career. Andrew Muse photo.

You've most likely seen pictures of Andrew Muse climbing desert towers, standing on top of sparkling peaks, or snorkeling through deep powder—usually with his adorable dog Kicker in tow. His popular series, "Tiny Home Adventure," follows Muse as he travels the world, meeting people and seeing new places from his adventure home on wheels.

Andrew had a bad wreck in 2015 while filming the final episode of Season 1 in his "Tiny Home Adventure series," totaling his truck camper and losing his beloved dog, Booter.

After an outpouring of support from his followers, Andrew got back on his feet, built out a new van, and spent almost a year on the road filming Season 2. 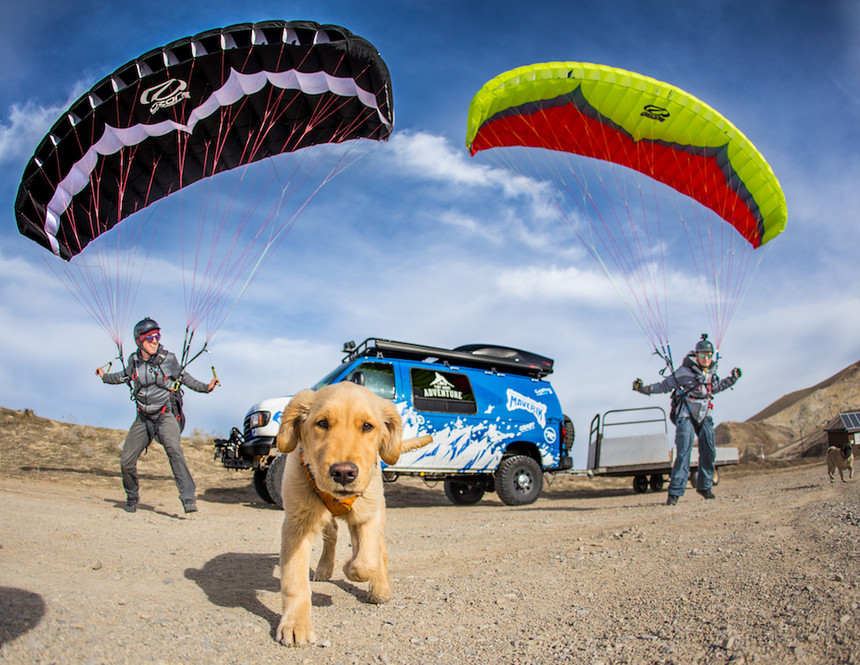 Muse had to rebuild after a wreck destroyed his first van, but he's built out his new home on wheels quite well. Andrew Muse photo.

When we caught up with him, Andrew was putting the finishing touches on production for his second season. We got him on the horn in between editing sessions to hear about the ups and downs of life on the road and the difficulty in getting back out there after a tragic accident.

TGR: You seem to always be on the move, how did you first get started living on the road?

Andrew Muse: It started initially when I first moved to Park City. The resorts were closed so I'd just take off for the summer since there was no work. 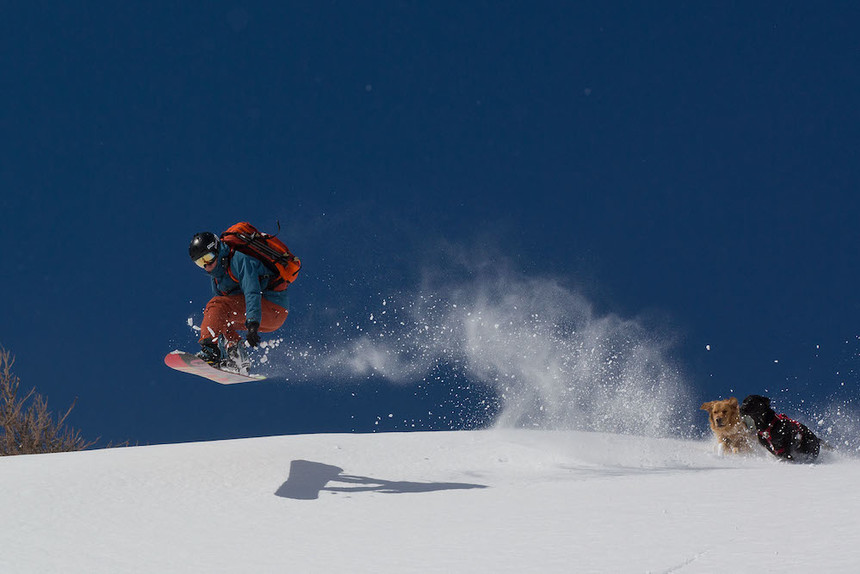 Life in his van has allowed Muse to get out and see the world while living within his means. Andrew Muse photo.

It started out as just two months a year in my Volkswagen Golf, but it soon became a way for me to live efficiently, not pay rent, and travel and do the things that I love within my means.

It can't be easy to build out a home on wheels–have you always been pretty handy or was it a steep learning curve?

AM: As a kid I would always take things apart, put them back together and have extra pieces—I wasn't particularly handy so much as I was really curious.

I'd done a little bit of construction work with a home energy efficiency business, taking homes and doing green remodels, so that's the skill set I had previously to diving into these projects. I always liked working with my hands, but I'd never done a project like this so there was definitely a huge, huge learning curve. With the camper I thought it would be two weeks, $500, no problem. That turned into about 400 hours and way more money than I had anticipated.

Was it easier the second time around with your van from Season 2?

AM: Definitely. The first time I just dove right into it and figured you can just YouTube anything. I wasted days doing stuff that I just ended up tearing out, or hours working on something that actually had a very simple fix. Once I figured those things out I never made the same mistake. 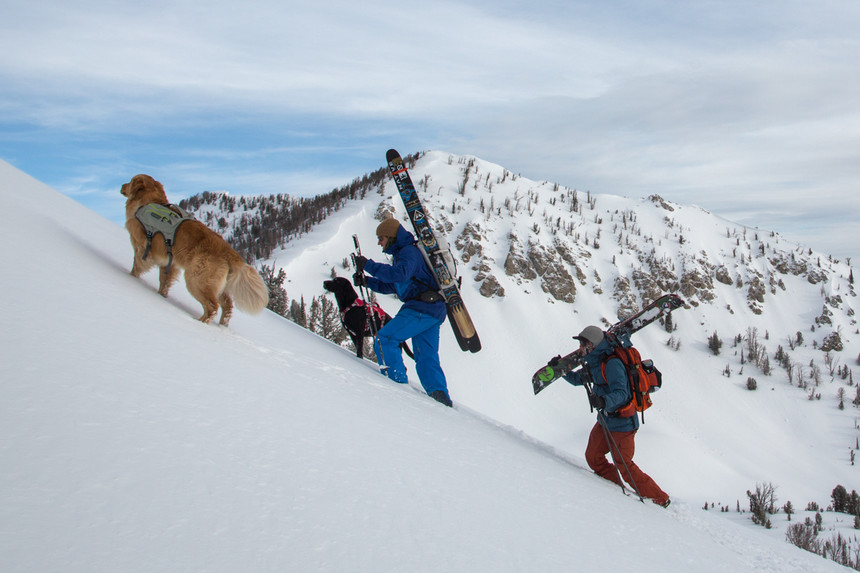 Without being chained to a home and mortgage/rent, Muse has been free to enjoy all the first tracks he can stomach. Andrrew Muse photo.

The van took about 150 hours which was a bit of a crunch because I got the shell three weeks before I was supposed to leave for Alaska. I was just grinding, trying to get it done so I could take off. Once I got back I revisited it to put in all the components that I'd wanted initially.

After your accident in 2015, did it take you a while to get back on the road and keep up with the series?

AM: After the accident I had no idea which direction my life was heading. I was completely financially exhausted with nothing left to my name.

But the community of people that were watching the Tiny Home series and the amount of people who reached out and told me that I'd inspired them to live their life in a more passionate way really helped motivate me to get back on my feet. It turned into more than just an entertainment series, which was what I originally thought of it as. I found out that a lot of the people following it really identified with it on a more emotional level and told me I'd really inspired them to change the course of their lives. 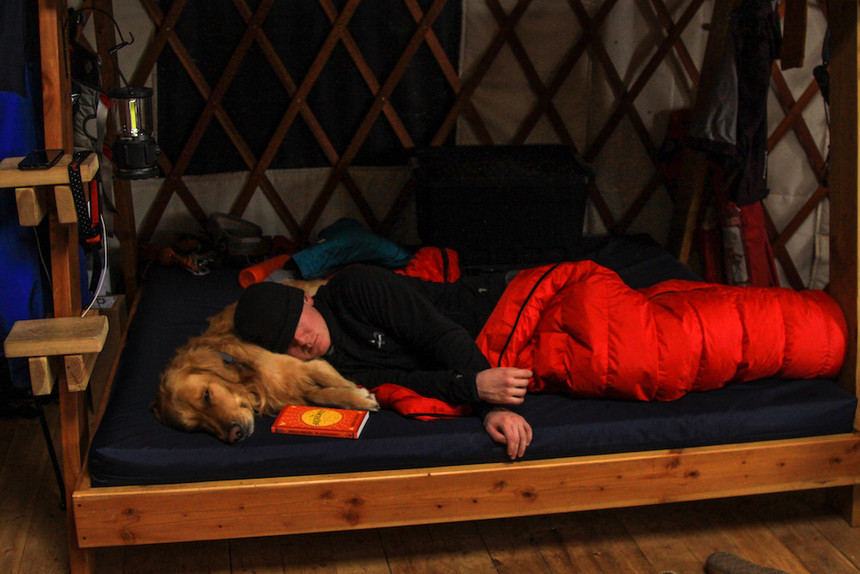 Pro tip: When you're on the road and tight on space, you can always use your dog as a pillow. Andrew Muse photo.

I put together a YouCaring to try to raise like $2,000 to get back on my feet and it raised $25,000 in 48 hours. A few weeks after the accident GoPro reached out and offered to pick up Season 2 and one of the firefighters in the accident gave me Kicker. It was mind-blowing and still brings me to tears sometimes that people cared so much. If it wasn't for that I don't know if I would have gotten back out there and done it again, at least not that quickly.

Has your perspective on travel has changed since the accident?

AM: Absolutely. I learned a lot. I never drive tired and I try not to drive at night if I can avoid it. I'm never in a rush now, I just make it a point to get where I'm going safely.

I also feel a much stronger sense of community with my viewers. I love to travel, see the world through action sports and meeting people along the way is what I live for. But knowing that there were so many people out there who supported the trip, who were kind of counting on me and really invested in it emotionally and financially, kept me going.

You've spent almost two years in a van or camper. What have you learned from living in such a small space?

AM: Forcing myself to become a minimalist has been really great.

The first time around I got rid of anything that didn't fit in the truck camper. Everything had a purpose and almost every item had multiple uses. It really puts things in perspective and makes you appreciate luxuries that we take for granted, like having running water, a hot shower, or even a sink to do your dishes in.

Can you tell us a little about the less glamorous side of living on the road that we might not see on Instagram?

AM: Oh, I've got plenty. You have to compromise a lot. Not being able to do your laundry or shower very often can definitely start to get old. And not being able to stand up, like in the van from Season 2, can be tough after a while. 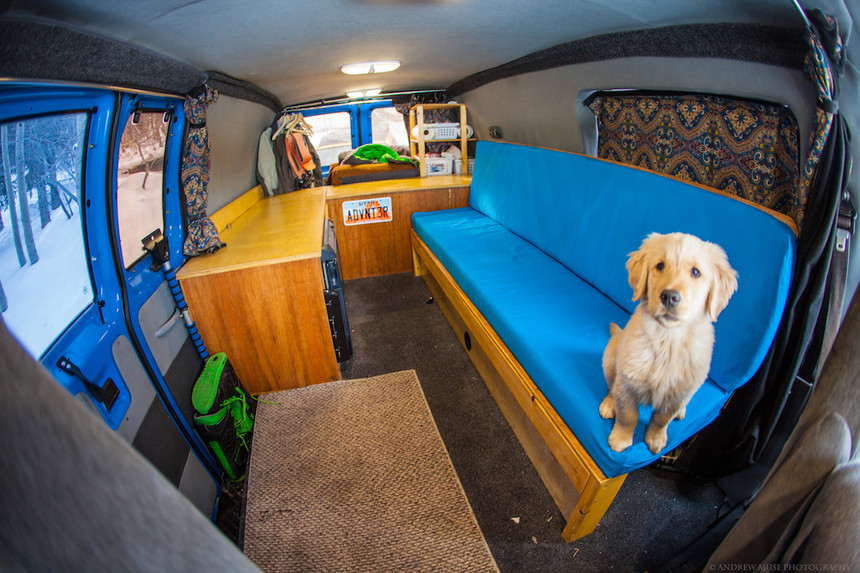 As you might expect, living inside a van isn't exactly spacious, particularly when you have a pup. Andrew Muse photo.

In Alaska last April it was myself, Kicker, and my friend who's a large Swedish man, all living in that van for three months. I was pretty ready to have my own space for a bit.

There are also times when you're on the road and it feels really lonely. That's usually short-lived because you meet so many people along the way but you definitely crave companionship or miss old friends when you're gone for a while.

Where to next? And can we expect a Season 3?

AM: Season 3 is coming, but it's a little further on the horizon than I'd hoped.

I'm looking at a new project vehicle that will hopefully be ready in the fall and then I'd like to take off for Nicaragua. I'm not a great surfer and it's been a dream of mine to spend a fall getting better at it. And then eventually Patagonia, but you know driving there is a whole other story—if even a story at all.

Any advice for someone who wants to build out their own adventure vehicle? 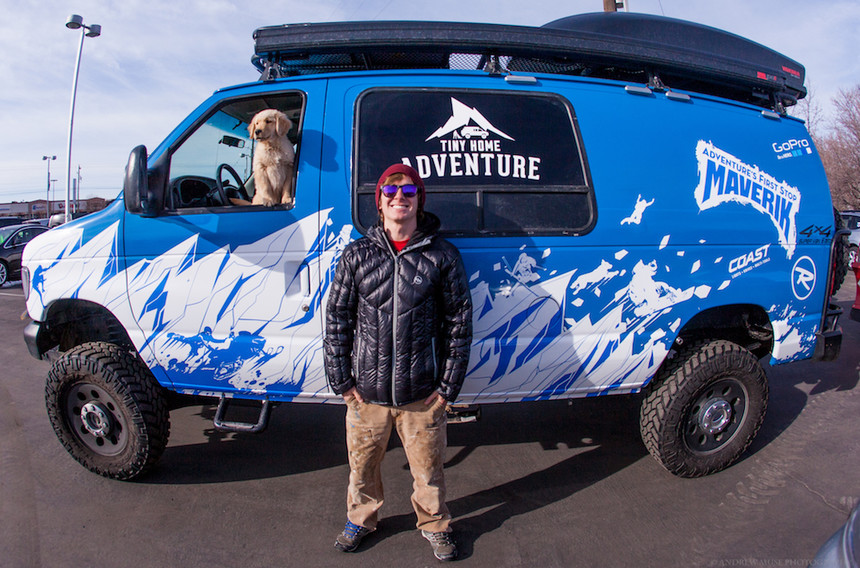 You learn a lot about yourself and inevitably you learn a lot about mechanics and building—that part is hard to avoid. Diving into solo travel can be intimidating, but people are a lot nicer than you might think. What you put into your adventure is what you'll get out of it. If you give it the time it can be a truly incredible way to live.

This Snowboard Company Operates Out of a Tiny…

Get the best kolkata escorts right now without any delays:

Craig Kelly was unquestionably a legend, a pioneer, a masterful artist and above all an insightful and intuitive human who was lost too soon. January 21, 2016 marked the 13th year since Kelly passed away tragically in an avalanche guiding a backcountry mission near Revelstoke, BC, according to  Transworld Snowboarding. While inducting him into the U.S. Ski and Snowboard Hall of Fame in 2013, they said, "nobody ever, in the history of snowboarding has meant so much to so many people

OP-ED: Now is Not the Time To “Try” Backcountry Skiing

OP-ED: Now is Not the Time To “Try” Backcountry Skiing

This will still be here when this all blows over, so let's rein in the stoke and keep staying extra responsible out there. Lily Krass photo. The problem with backcountry skiing and snowboarding is that our decision making often doesn’t come with direct validation. We often don't know if we made the right decision, because there's no direct feedback to prove us right or wrong. Sometimes there is, though. Just a few days before the gates were closed to the public, I was involved in a close

How to Get Your Dream Job at Patagonia

How to Get Your Dream Job at Patagonia

Working in the outdoor industry has its perks. The rad people, the gear discounts, and of course the opportunity to blend your passion with your 9-5. Getting that said dream job? Easier said than done. If you’re hungry for a few tips, Patagonia recruiting manager Alyssa Kessler has some worth considering. She recently caught up with the Outdoor Dream Jobs podcast to share a few ways to help your chances of getting in with a coveted company like Patagonia. RELATED: Clif Bar Celebrates