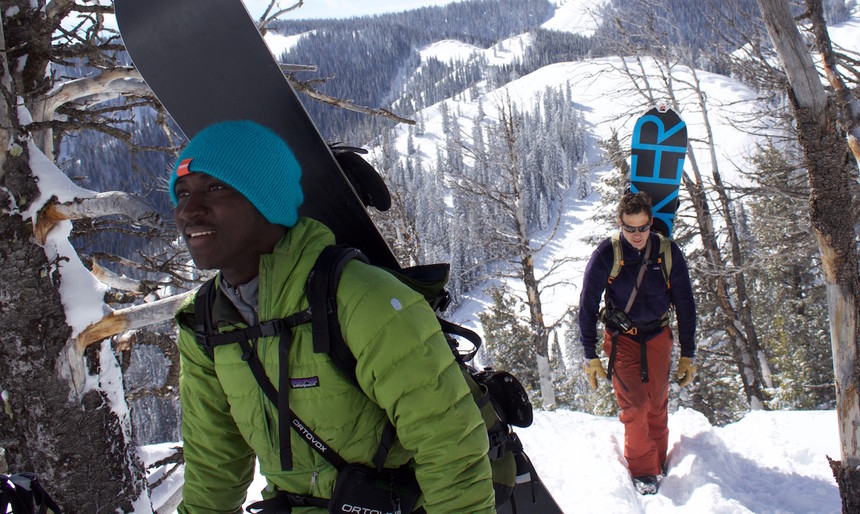 Sitting on a chairlift, wind ripped at Alpha Barrie’s face. Halfway through one of the most challenging months of his life, the 24-year-old Sierra Leone native was beginning to wonder if he’d ever see the sun again.

But that morning, Grand Targhee’s fog lifted, and upon reaching the top of Dreamcatcher, Alpha beheld the full majesty of Teton Valley illuminated in golden light.

“When the clouds cleared, it was one of the most beautiful things I’ve ever seen,” he said. 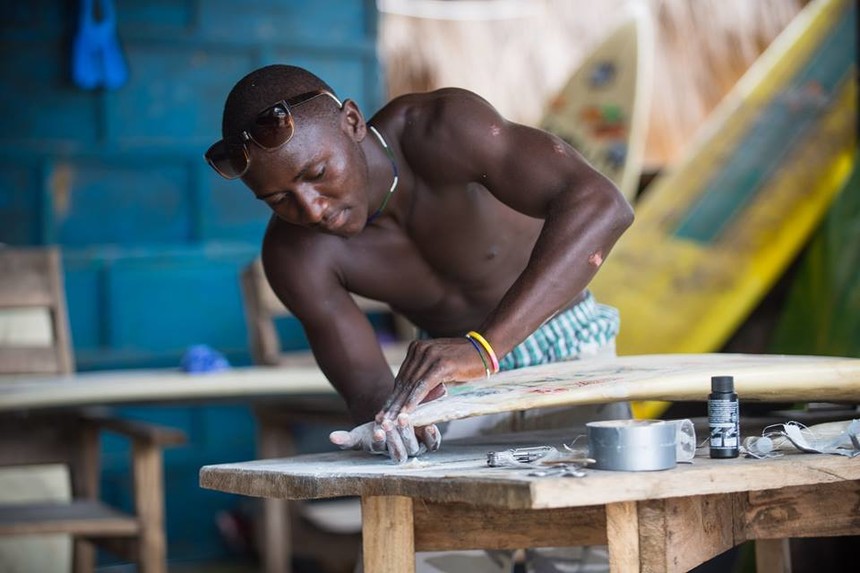 Alpha Barrie came of age in a small oceanside fishing community called Bureh Beach, where, by his own admission, life was tough. As a young man, Barrie had to leave school because his mother could not afford to pay his tuition, and he eventually turned to fishing as a means to subsist and support his family.

Unbeknownst to Barrie at the time, Bureh Beach also happened to be a superlative surf spot, and gradually the community began to see expat surfers come to pioneer the clean, uncrowded swell. But, like most undiscovered spots, word got out.

“There aren't that many locals surfing in Sierra Leone,” Barrie said. “I started when surfers began to visit my home, and I wondered what it was. A friend who worked for UNICEF brought us our first board. Early on, we all shared it. If you rode two waves, you had to come in and swap.”

As Barrie's surfing skills grew, so did Bureh Beach’s international surf profile. Riding the public interest and surge in tourism dollars, the community founded the Bureh Beach Surf Club, and Barrie managed to secure a job as one of the club’s secretaries and surf instructors. 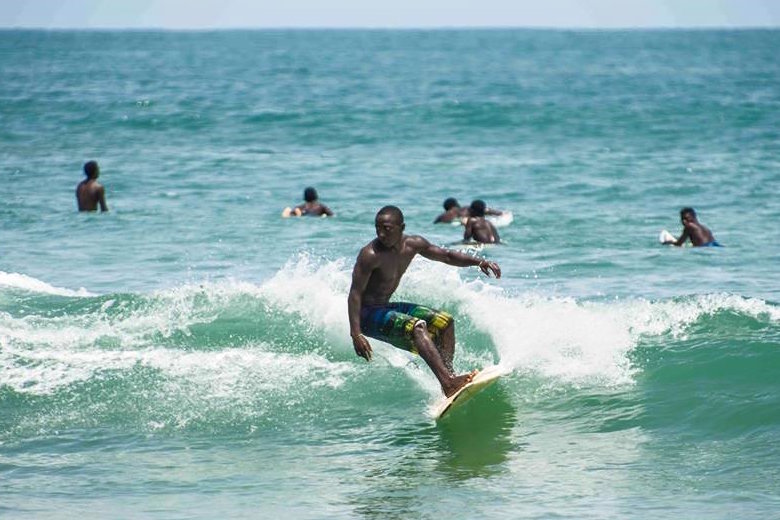 Meanwhile, on the other side of the world, 20-year Teton Valley resident and consummate boarding enthusiast Adam Towle was preparing for yet another surfing expedition. But, having chased his passion to over 30 countries already, Towle was stoked to try something different.

“I wanted to go somewhere I hadn’t been,” Towle said. “I investigated Sierra Leone, l knew there were good waves there, and I figured that after the ebola crisis that ravaged that country in 2015, I wouldn’t find any crowds."

During his research, Adam learned about the Bureh Beach Surf Club, and upon calling the listed number, Alpha Barrie answered the phone.

“I asked him if there was anything I could do to help when I came down, and Barrie was like, ‘Well, we need board shorts, rash guards, wax, fiberglass, repair stuff...' "

Towle’s travel instincts, it turned out, were on point. The Ebola epidemic — while sparing Bureh Beach — had managed to scare away a large majority of western tourists, so that by the time Towle arrived in Sierra Leone, he was the first surfer to make the trip in a while. 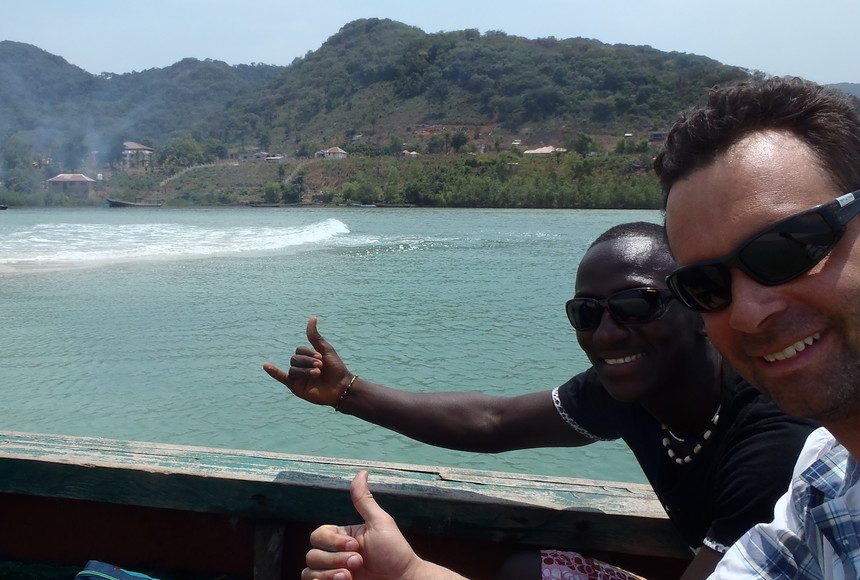 Alpha and Adam take an outrigger to another of Barrie's secret surf spot. Adam Towle photo.

Barrie met Towle at the Freetown airport and they drove down to Bureh Beach together. Over the next two weeks they explored the coast, doing some exploratory surf missions only accessible by canoe and motorbike. During those adventures, Barrie became more than just Adam’s guide, but also his friend.

“He kept me out of trouble,” Towle said. “It was a special experience because Sierra Leone has seen a lot of difficult times — civil war, Ebola, poverty and a lack of opportunity — the surf club provides a home for the surfers.”

Snowboarding, surfing, they’re kinda selfish sports, it’s all about me, the powder, fresh tracks, getting ahead of that guy and this — I really wanted to give back.

After a couple weeks exploring secret spots and developing a friendship with the local, Towle was surprised when his new friend confided he wanted to come to the US and learn to snowboard, but Towle agreed to help Barrie manifest his long-shot dream.

“Him coming was a once-in-a-lifetime opportunity. I figured, If I could change someone’s life through snow sports, it would also give something to the world,” Towle explained. “Also, snowboarding, surfing, they’re kinda selfish sports, it’s all about me, the powder, fresh tracks, getting ahead of that guy and this — I really wanted to give back.” 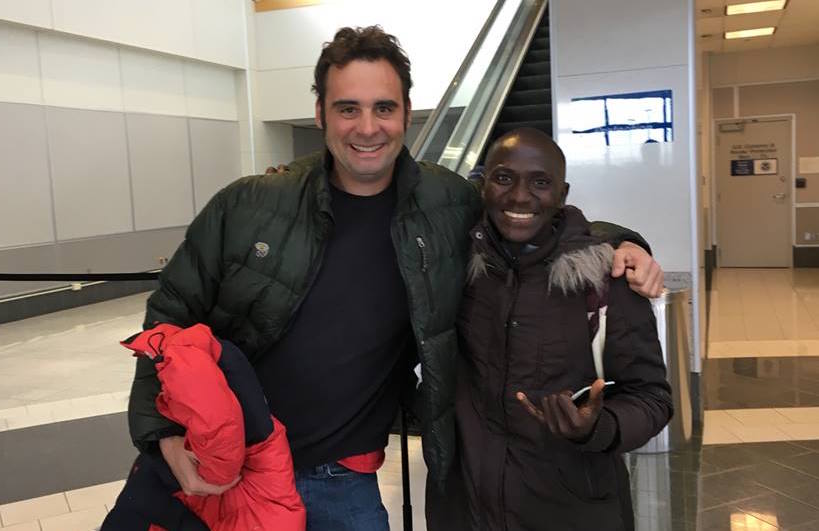 Alpha gets ready for the coldest hour of his life at SLC airport. Adam Towle photo.

In his sponsorship letter, Towle noted that Barrie was coming to learn to snowboard and would become the first Sierra Leonian snowboarder ever.

The day of his visa interview in Sierra Leone, the four applicants in front of Alpha were all denied. When asked what would keep him from staying in the US illegally, Barrie insisted the North American cold would eventually drive him away.

Sold on the young man’s passion, as well as Towle’s determination to welcome him, he was granted a visa. 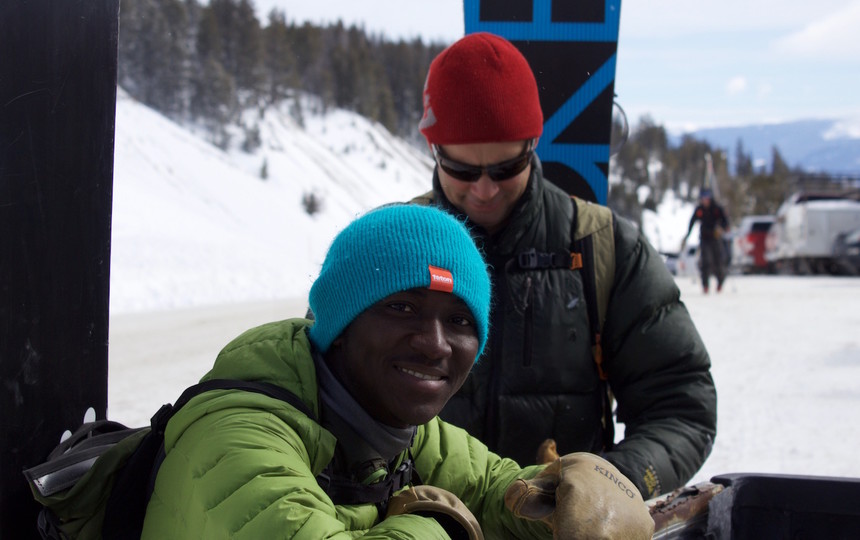 When Barrie finally arrived in Salt Lake City, the initial blast of arctic chill almost turned him around. The frigid temps were shocking to the West Africa native, and once back in Teton Valley, Towle reached out via social media, and quickly got all of Barrie’s gear donated.

“Friends donated everything,” Towle said. “Boots, bindings, boards, clothes. I even wrote a letter to Grand Targhee explaining the situation, and they donated a season pass! That really says a lot about our community, and how much people care about the world!” 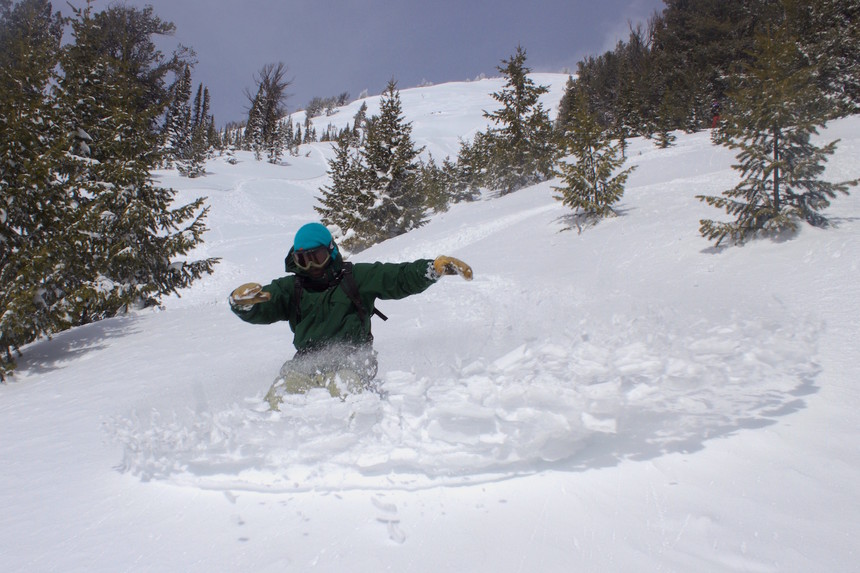 Now, with three months of storm riding under his belt, Barrie has begun to reflect on his stay in America, and also why board sports are such great incubators for cross-cultural friendship.

“I think surfing and snowboarding are some of the most social sports,” Barrie said. “People meet in different places in the world, and the passion connects them, no matter where they’re from.”

Surfing and snowboarding are some of the most social sports. People meet in different places in the world, and the passion connects them, no matter where they’re from.

After watching Barrie’s progression from a never-have-done to being a skilled rider, Adam Towle admits he feels incredibly proud of the Sierra Leonian shredder, and what he’s accomplished.

“Both surfing and snowboarding are best enjoyed with friends,” Towle said. “The greatest moments, whether it’s on a wave, or in the powder, are the ones that are shared. Knowing where he’s from, and knowing how opposite his life has been from mine, to see him progress to a point where he’s not just following me, but riding with me, it has been incredibly rewarding to be a part of!” 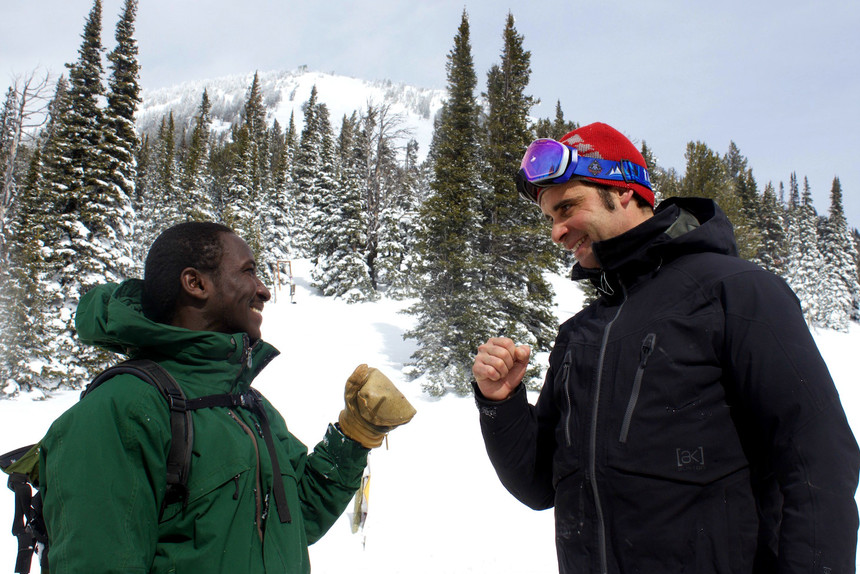 From The Column: Mentors

How This Surfer From Sierra Leone Ended Up…

How Sam Smoothy Learned to ski Like an Animal

Hadley Hammer Opens Up About Her Mentors

Cool! want to have adventures like this one! Going to start following my dreams, will <a >learn where can i get a high quality assistance with physics homework</a>. Thanks to this I’ll have more free time for adventures.

While we have been burdened with expectations of a successful successor to the LG G6, we have been saying for some time that this new phone will be the one phone which will rule them all.
LG has already been on a roll and we expect that the G7 will also be up to the mark. Want to know more about it? Check out this website LG G7 Kit Images This substance is composed exceptionally well. Your utilization of organizing when mentioning your focuses makes your objective facts clear and straightforward. Much obliged to you.  Yellow cab

A perfect time for you guys to enjoy these moments and fun with other people who visit. I hope you did it very well. installing an invisible fence Wow, nice story. thanks you for share this story and awesome.
Write My Essay with High Quality

This substance is composed exceptionally well. Your utilization of organizing when mentioning your focuses makes your objective facts clear and straightforward. Much obliged to you.Same Day Tours

howdy was simply checking whether you minded a remark. i like your site and the thme you picked is super. I will be back.  Digital Marketing Singapore

Pleasant to peruse your article! I am anticipating sharing your enterprises and encounters.  NaijaTechGuide

By And Large I do not post on blogs, but I should to say that this post really forced me to do so. Genuinely nice article! Gun for sale

Wow what a Great Information about World Day its exceptionally pleasant useful post. a debt of gratitude is in order for the post.  mode octotonique

Young men are more likely to leave college early to pursue a job or the military. die Website

You have noted very useful details! PS. nice web site. “Disbelief in magic can force a poor soul into believing in government and business.” by Tom Robbins.. adderall xr

I love adventures and after reading this post, I would love to explore this site. Thanks and Cheers. Anonymous HIV Testing Singapore

Last year Chris Benchetler and Kimmy Fasani embarked on one of their most exciting adventures yet: starting a family. It wasn’t a particularly easy task for two globe-trotting professional athletes committed to maintaining a lifestyle that’s immersed in the outdoors. But instead of viewing parenthood as a bookend to their adventures, the couple is embracing it as a new chapter. They’re still out in the mountains, but Koa, their little one, joins too. At the tender age of 13 months, Koa

Spruce Up Your Yard With Donny P

Spruce Up Your Yard With Donny P

Donny P has finally made it out of the basement. Thank God. And once again, Donny proves to us what a Renaissance man he’s become during the quarantine. After some supreme tiling and stair building, he’s back outside where he belongs. It may not be Sunday River, but his backyard is just as good. RELATED: Donny Pelletier Uses His Quarantine Time Wisely Lucky for you, he’s got a few tips for sprucing up your own backyard lawn. If you’re tired of being swindled by the hooligans at Home Depot you