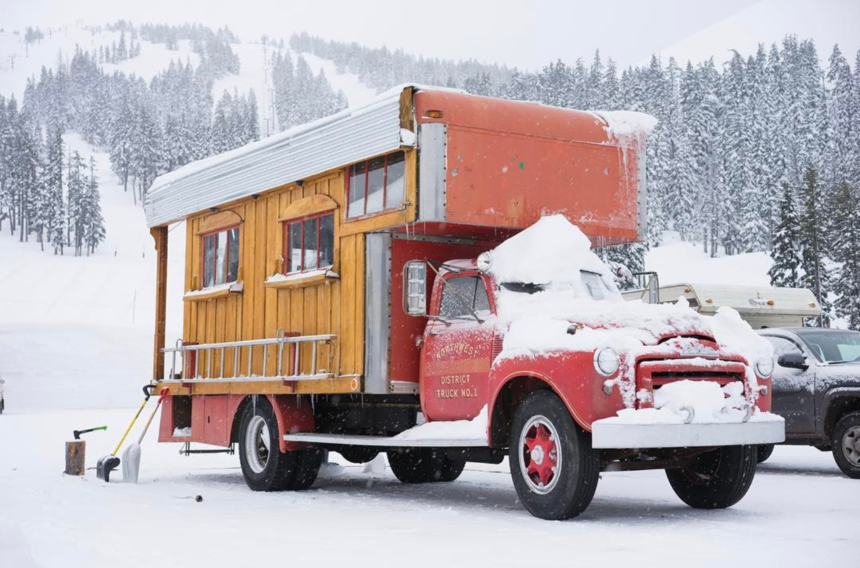 The converted fire truck that Austin Smith has made his home.

There’s a retired 1953 GMC fire truck with a hand-built wooden deck piping smoke out of the chimney from the wood-burning stove inside. There’s a chili pepper-red box truck sitting in the sand with surfboards propped up idly against it as the sun sets over the beaches of Baja, Mexico. What the photos don’t tell you is that the fire truck has a blown transmission. And the box truck? It’s stuck in the sand.

RELATED: Tragedy, Rebuilding and Life on the Road: How Andrew Muse Pulls it All Off

But Austin Smith will let you know what it’s like to dig a rig out of the sand for five hours in the Mexican July sun. And he won’t be too shy to share the nuisances of finding a mechanic who can rebuild a 1953 GMC engine. The tropes of living life in a vehicle are as common as a social media hashtag—and even being “honest” and serving up the “real” side of mobile living has been reduced to a contrived caption or two online. But for Smith, the reality isn’t about living minimally, being free, or making sacrifices—it’s about doing what you want. 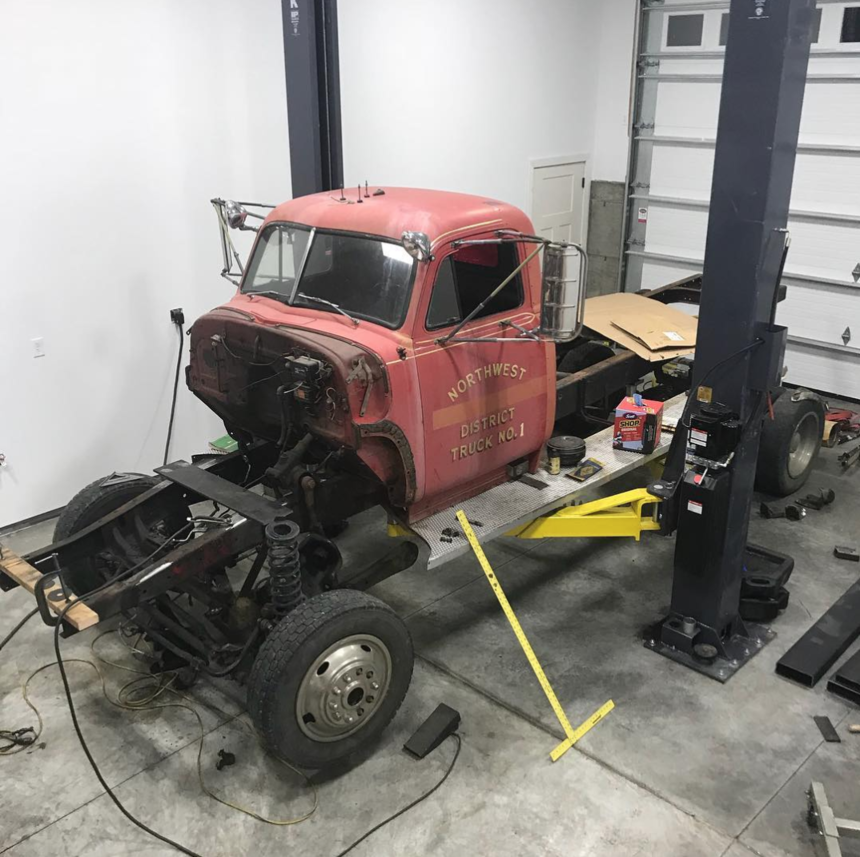 Smith put in the work to affordably renovate his firetruck. Austin Smith photo.

That make-it-work and make-it-work-for-you outlook has led him to snowboarding professionally, recently traveling to Pakistan, and living in two trucks on opposite ends of North America.

“You have to look outside the norm of what’s done and see that there’s always a way around it,” he says. “That mentality has been lost a little bit.”

Living out of the backs of big, slow, beautiful trucks wasn’t something that Smith was aiming for. Not many folks living on four perfectly-outfitted wheels can say it was an accident. But for Smith, it was.

“I didn’t seek this thing out—my brother borrowed money from me, bought it, and then decided that he didn’t want it, so it kind of fell back on me,” Smith says. “It was this deteriorating empty box and I thought I would just finish it as a one month project and then sell it for a profit. And then I fell in love. I enjoyed it a lot more than I thought I would and I want to keep around for a long time.”

Smith spent six weeks last year in the Mt. Bachelor parking lot and next season he plans to “hang out in it more.”

Currently, the fire truck is parked at Carrick Customs in Oregon, getting revamped with a new engine, transmission, axles, and four-wheel drive so it can go anywhere Smith does during the 2018-2019 snow season. 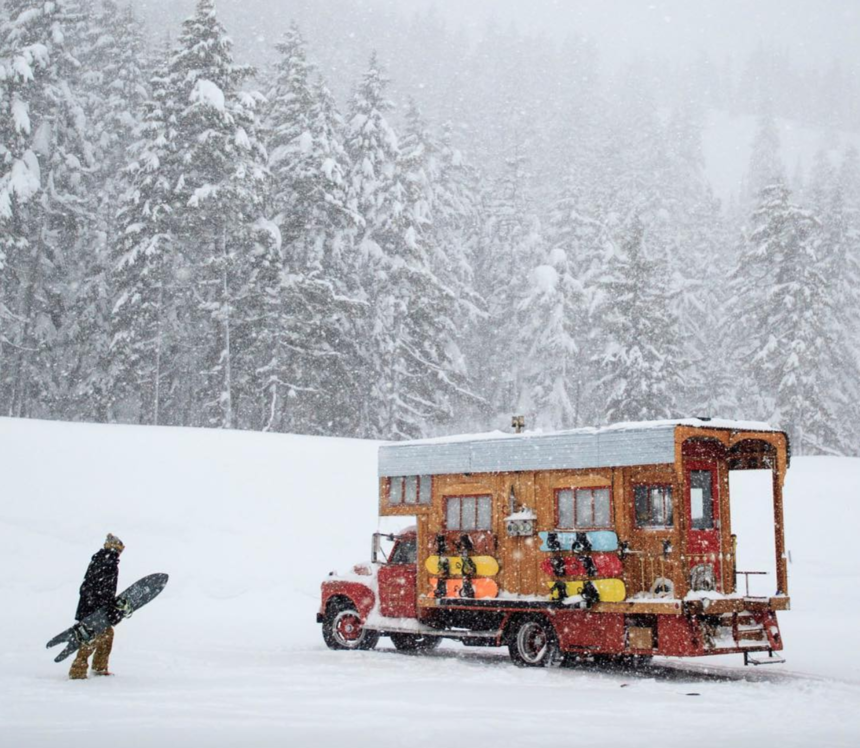 Smith is adamant that living out of a van doesn't need to be uber expensive. Bob Plumb photo.

“I want to take it to a variety of ski areas and show people that you can snowboard all winter and not end up broke,” he says. “The ski industry people like to focus on the Vails and the $160 day tickets. It’s so expensive—if you let it be. People want to say, ‘Oh snowboards are 1,000 dollars, gear is so expensive, I can’t buy a pass. So I can’t snowboard.’ But I don’t find that very true. I didn’t grow up in that class. We didn’t have very much money and I found that there are ways around that ‘scene’ if you really want to board.”

So what does that have to do with his mobile homes? Everything.

“I want to use this as a showpiece to explore that mindset that you have to try and do things differently in order to have what you want. I’m done accommodating that you don’t have to show the balance of culture classes in the ski industry.”

Smith is right. There’s never been a larger surplus of gear that’s being produced and in turn it created a market of last-season and used gear that’s more affordable and more abundant than ever before. Don’t want to buy a pass that has a four-digit price tag attached?

“Snowboard in your backyard,” Smith says. “Snowboarding used to be about hiking up little hills—just trying it out. Go try it out. If you want something, things like money and gear won’t stop you that easily.”

This ideology comes on the hem of Smith combating the excess and opportunity that he has in his life these days. He’s not making it harder on himself just for the sake of making it harder; he’s making things work for the sake of making himself happier. He’s outfitted both of his trucks for less than $2,000 a pop, and for a guy who never even planned on having a home on wheels, is doing pretty well with planning his winter and summer athletic pursuits around where each of his rigs are parked. 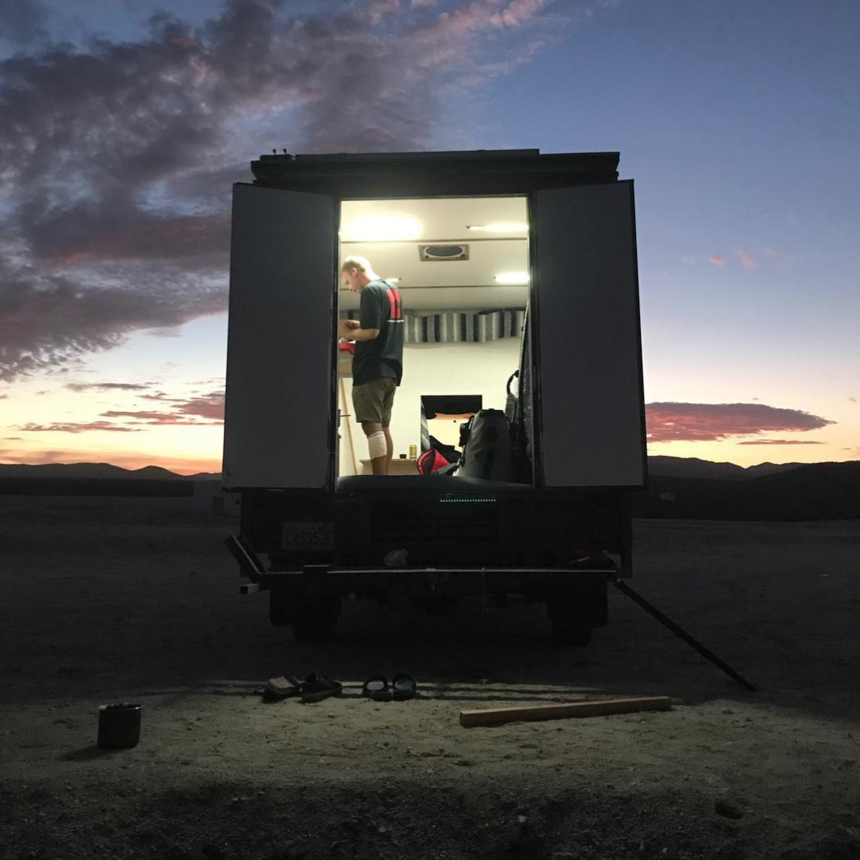 It's not all sunshine and rainbows, sometimes your box truck gets stuck on a Baja beach. Austin Smith photo.

“Through social media you see people in these $150,000 sprinters saying that they’re exercising minimalism," says Smith. "But those vans have more appliances and electronics than most of the homes that they’re leaving behind.”

He sees his trucks as the snowboarder-mindset version of van life.

“These trucks are a little bit more relatable and possible,” he says. “That fire truck cost $5,000 and the box truck cost $4,000 and outfitting them was 1,500 bucks each. It doesn’t have to be as glamorous as social makes you think.”

Smith says he has folks constantly hitting him up just to ask, “how did you do it?” and wanting an outline for their own opportunity to make an adventure rig.

“They’re waiting for everything to be perfect,” Smith says. “But you have to just start and make decisions along the way. You’ll figure out that all you need is ‘X, Y, Z’ rather than the whole alphabet.”

Austin is headed down to Baja to reunite with his box truck in May—and after breaking his foot by hitting a rock on his snowboard a few weeks ago, is looking forward to getting to the beach.

“Last year I outfitted the box truck as a beach dojo and this summer I hope to do less work and more play on it," said Smith. "I just want to and hang out and surf. And since I just broke my foot I think walking in the sand will be nice. The box truck is my P.T. dojo this year.” 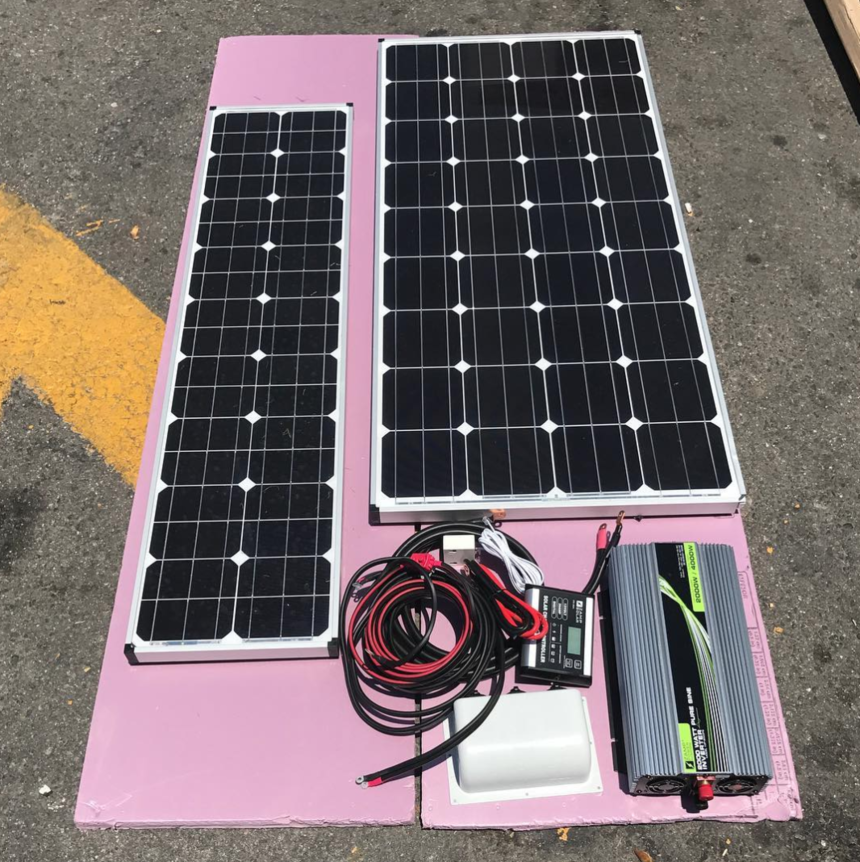 And if the fire truck in Oregon is all about staying warm and trapping heat in, then the box truck is its antithesis—trapping the heat out. Both trucks are “super insulated” and have amenities that allow Smith to do his best living in two very different environments. The fire truck has a wood stove and a porch, the box truck has solar panels and a rooftop deck. “Oh, and a Vitamix for blending drinks. I thought that would be nice,” he adds.

Outfitting each of the trucks has been a learn-as-you-go process for Smith, and he never starts with a “plan,” per se. 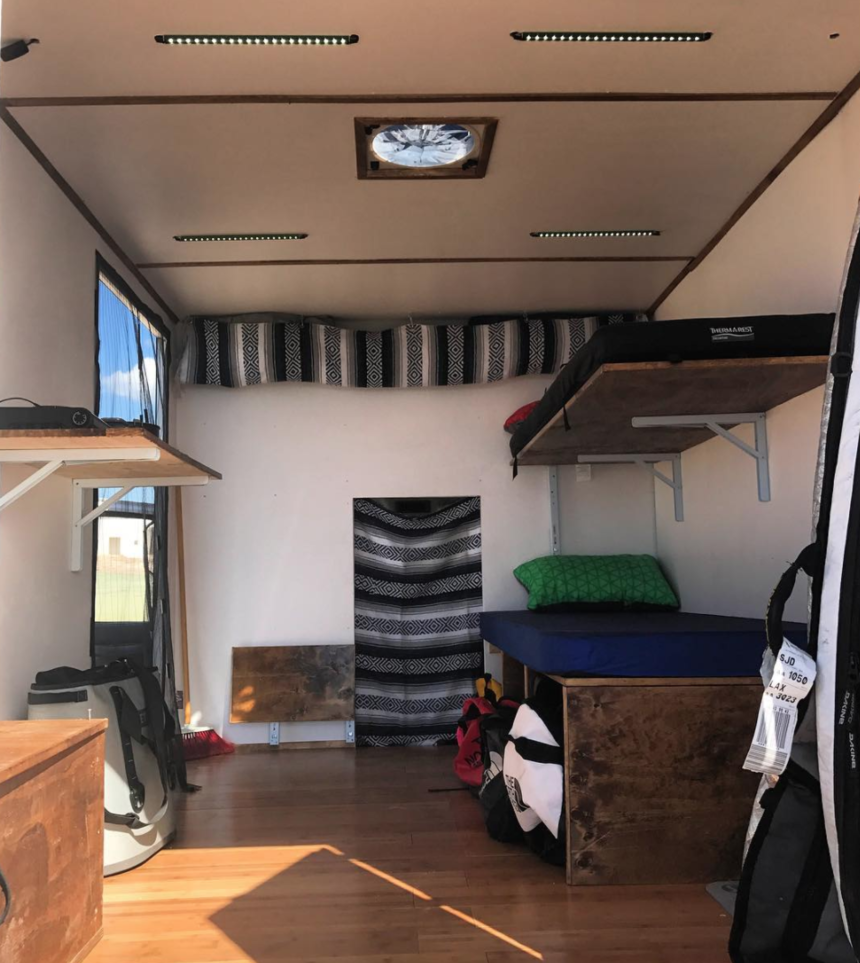 Smith recommends building out your van without a set-in-stone plan, but rather adapting to how you think will be most efficient. Austin Smith photo.

“Living in a mobile space makes you realize what is going to benefit your day-to-day life,” Smith says. “ You have to ask yourself, ‘What are you actually going to want or need?’ Especially in my life—which is a lot of excess with sponsors and gear and things—it’s my personal practice to shed more, have less and find what actually makes me happy.”

He catches himself. “It’s contradictory that I have two trucks in two different countries. But I’m not seeking to have more. I just want what makes me happy.”

I like the GM it screams tough and it’s americana all the way.seeing someone that’s supposed to be the hipster elite drive a rig I would made me smile.
Loki and baby pitbull