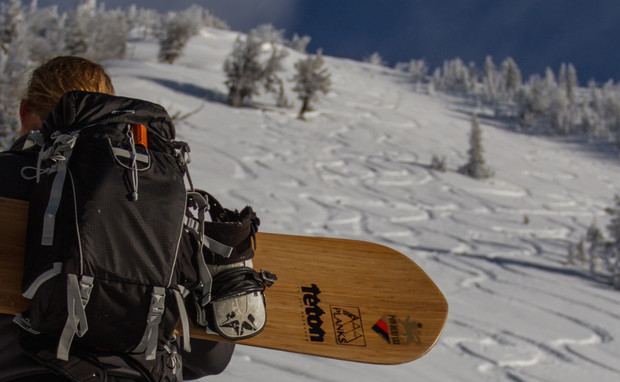 The author hikes up the Mount Glory bootpack with the Snoplanks Hybrid Fish on a powder-perfect bluebird day. Ryan Dee photo.

Every once in a while, a piece of gear comes along that completely changes the way you practice a sport. Stepping beyond the realm of function, sometimes a simple snowboard redefines the philosophy behind the purpose you take to the mountains in the first place.

In an era where the cultural zeitgeist openly laments the death of snowboarding, low-key players led by the likes of SnoPlanks are reclaiming the soul of riding for a new generation. 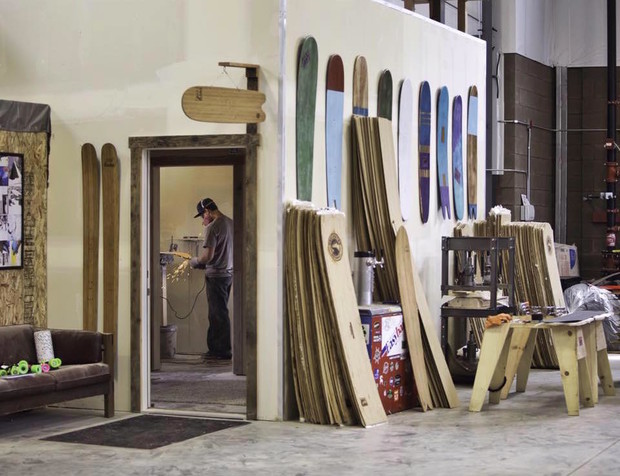 SnoPlanks founder and shaper James Nicol perfects the cut of one of his boards at his workshop in Bend. SnoPlanks photo.

Contrary to popular belief in the snow sports industry, snowboarding isn't on its death bed. Sure, sales are slowing, the edgy, chip-on-the-shoulder attitude has waned, and less kids are taking to the sport to throw triple corks in the park, but the parts of snowboarding that pertain to its philosophical core have seen nothing less than a modern-day renaissance. If anything, creative shapes and innovative designs are the shining light leading the industry out of the darkness.

Helming the vanguard of this new awakening, SnoPlanks, and all those that would walk in their path, are a bellwether for a sport that to many seems to be adrift and rudderless.

The Journey to Edgeless 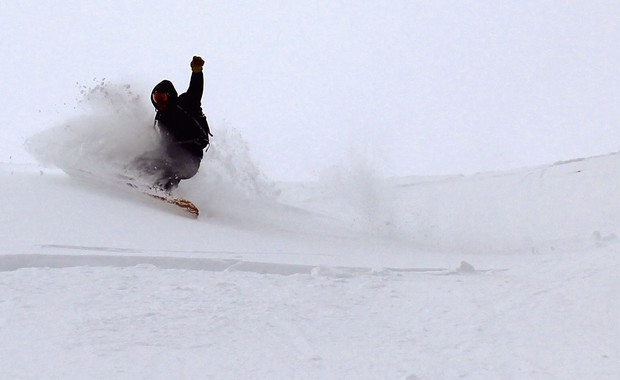 The author primes his entry into the white room on an edgeless Hybrid Fish at Teton Pass. Toby Koekkoek photo.

My journey to SnoPlanks was one dotted with long lift lines, sore back legs and constant powder anxiety. I’d spent countless nights before big storms hovering in front of my computer screen, plotting and over-planning every component of the following powder morning.

But those days would come and go too quickly, my powder lust only temporarily satiated. To me, the powder congregation — at least at the resorts — had become too numerous. The hurried temperament, selfies, Instagrams and playlists seemed to drown out the god I was there to pray to.

On the cusp of disillusionment, SnoPlanks founder and craftsman James Nicol sent me the Hybrid Fish for review. An edgeless bamboo stick from tip to tail, the thought of treating the Hybrid similar to other boards — taking it on speedy groomer laps at the resort — seemed almost sacrilegious. 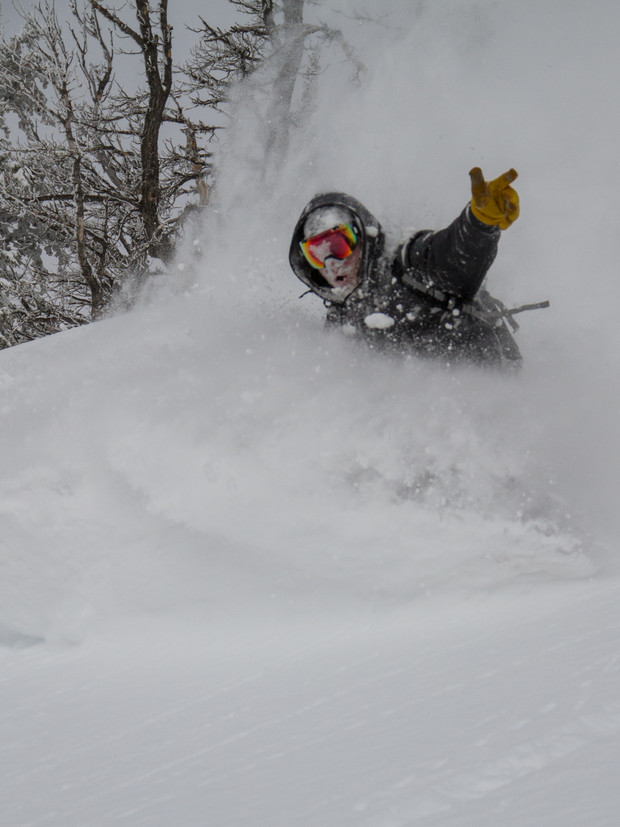 The edgeless bamboo plank seemed to whisper a yearning for powder. In a similar way that it would be a waste to teach driver’s ed in a Porsche, the Hybrid Fish was, and is, a highly specialized powder surfing tool. Unashamed and unapologetic, the Hybrid doesn't need to be everything to everybody. It is what it is, and if that doesn’t work for you, you’re either going to adapt to cater your riding to its intent, or find something else. 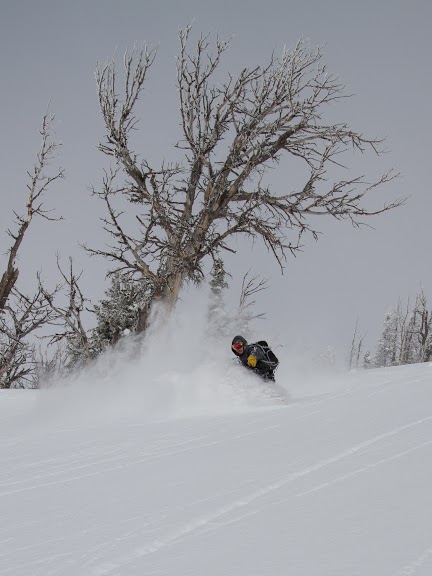 A relative stranger to the backcountry, the first time I hiked the Hybrid Fish up Teton Pass was a revelation. Long a connoisseur of powder snow, the edgeless deck was perfectly engineered to the task I found most favorable – smooth, unhurried powder turns with lots of faceshots – rendering it a superlative ride.

Rockered from tip to tail, super flexy and zero taper throughout, the Hybrid seemed to turn reflexively at the slightest hint of changing weight distribution. The lightweight quality of the bamboo supplemented this characteristic so that I was spending more time eying my line than pushing my board around. Effortless turns!

Getting caught up in the ecstasy of the ride, time would slow down so that each slash approached the infinite, and one turn could usurp the satisfaction of many.

On the Hybrid, a single turn has the power to equal a thousand of lesser quality. If you want to approach your riding as a zen-like activity that is just as much meditation as physical sport, this plank is a great means to move in a new and satisfying direction.

But that’s not to say that this deck can’t be ridden on hardback. To the contrary, the Hybrid does have edges, just not metal ones. It might not bite icy hardback the way your freshly tuned Lib Tech board will, but that’s not why you’re riding the Hybrid Fish in the first place. On firmer surfaces, it maintains its capacity for quick, effortless turns, but due to its softness, the Hybrid is ultimately meant for slower turns in deeper snow. 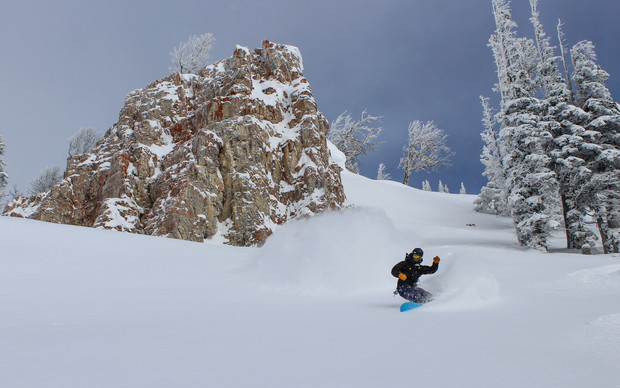 After falling in love with the Hybrid Fish in 2015, SnoPlanks sent TGR one of their new edged models, the  Model A, to test in 2016.

The Model A — much burlier in flex and form than the playful Hybrid Fish — pragmatically marries the tradition of backcountry hiking with the reality of many who prefer the mix of inbounds, side country and backcountry. A seeming departure from the no-compromise philosophy that seemed at the heart of the edgeless Hybrid Fish, the Model A is a prime option for the two-foot pow day at the resort where mixed conditions are to be expected.

Sometimes, getting to and from the goods entails going through the bads, such as wind-scoured, sun-affected, or tracked-up aspects. These mixed conditions are where SnoPlanks' Model A shines. Flat underfoot and rockered in the tip, the Model A is excellent for steep, technical lines in backcountry terrain. 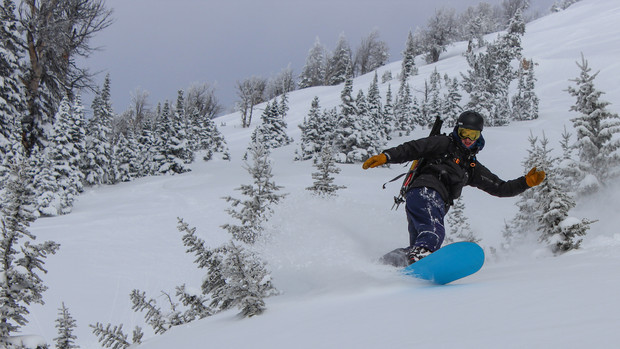 The deck is equipped with a double layer of bamboo, which leads to added weight and a decreased amount of flex. The Model A excels at going fast and charging the fall line, but the second you need to make quick turns in tighter, confined spaces — such as steep, tight trees — you’ll start missing the Hybrid Fish.

Put another way, the Hybrid Fish is great for powder play, while the Model A is made for powder precision. Use the Hybrid Fish for your local backcountry tree stash. But for a serious day of tram laps, stepping to big drops, or competing in the Freeride World Tour, utilize the edged Model A. 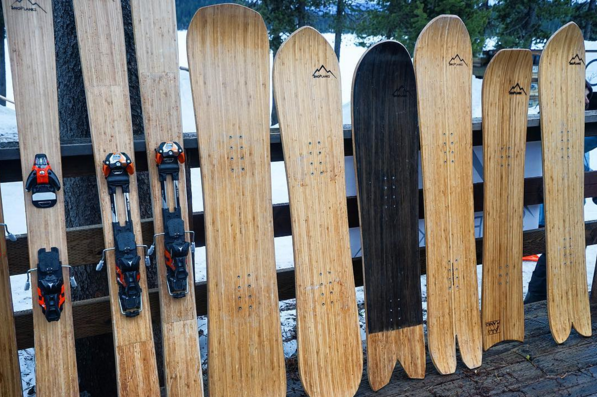 Beyond the Hybrid Fish and the Model A, SnoPlanks has actually gained the most renown for their impeccable SnoFish and SnoDisc splitboard designs, which are currently back-ordered until next season at the earliest. Also on the horizon for the emerging brand is the addition of skis to their ever-evolving line of bamboo planks. If you’re like me and you love the edgeless concept and aesthetic, you can order any of their models customized to feature their no-metal hybrid edge technology — which is dope!

It’s also worth the reminder that SnoPlanks handcrafts every single board in-house at their small workshop in Bend. In the process of construction they utilize clean(er) burning bio-resins and locally-sourced bamboo. In fact, during the summer of 2016, SnoPlanks will be planting a 5-acre bamboo forest in the Willamette Valley region of Oregon to guarantee a sustainable source of bamboo well into the company’s future.

These boards, designed to surf the Earth, are not meant to be everything to everybody. Highly specialized and engineered to maximize functionality in powder snow, the art of riding a SnoPlank is to leave behind the world of quantity over quality, and embrace a paradigm where life is lived one powder turn at a time, and the process and journey trump the mediocrity of turn-and-burn resort laps.

SnoPlanks is about making love to the Earth, one slash at a time.

Get shacked! Check out evo's selection of radical 2016 powder boards and step up to the final powder days of the season.

This is some of the best-worst-ass-to-mouth-anal-teeth-bleachin-bad-breath-bullshit I’ve ever read.

Like collecting a real Indian tear from Dunfee’s pink eye.

According to Buckrail News, a Bison charged and gored a Colorado man in Yellowstone on Monday. The man was with his family on the way to visit Giant Geyser at Old Faithful when a bull bison advanced on and charged the group. The park released a statement saying that the family failed to leave the area upon realizing that a bison was nearby, and the bison charged and gored the man who sustained injuries to his arm. The man was brought to Eastern Idaho Medical Center where he will undergo