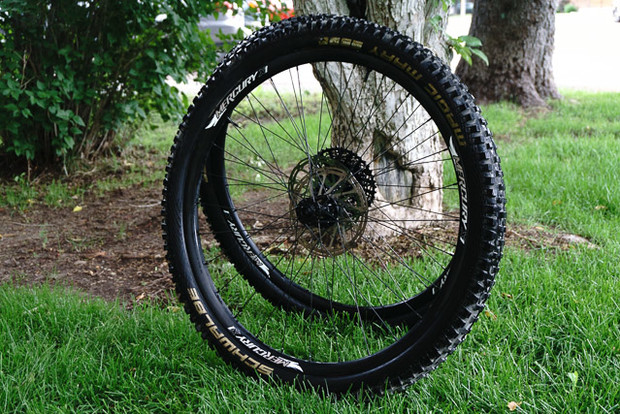 While a relatively new player in the mountain bike world, Mercury's X1 are durable, supple, and stiff when it counts. Ryan Dunfee photo.

Mercury is perhaps a wheel company you haven’t yet heard of. They grew up more in the road biking world, fashioning spinning things for low-BPM, loud lycra-clad pavement lovers for years, but have been focusing more on mountain bike offerings since moving from the South to Ogen, Utah, sharing a hub with that other manufacturer of radical carbon wheels, Enve. Slightly more reserved in their aesthetics and design, their wheels will not be the loudest or widest things out there, and instead offer a more nuanced look and design.

The X1’s are their carbon all-mountain/enduro wheels, and come ready for either 27.5” or 29” wheels, with claimed weight sitting around 1,600 grams for the 29” hoops or 1,530 grams for the 27.5” version. Coming in at $2,200 retail, they are damn expensive, although still about $500 below the top end of the market. But are they worth selling a lightly-used kidney to get? 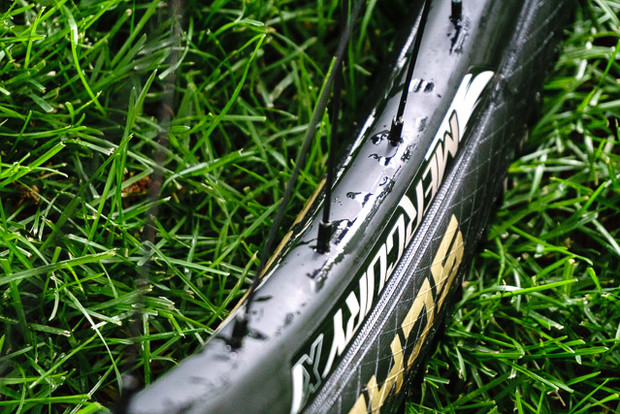 Wide, but not fad-wide. A nice matte black never hurt nobody, neither. Ryan Dunfee photo.

The X1’s are relatively wide although not fad wide, coming in at 32 mm external and 26 mm internal, a set of widths they arrived at to accommodate a wider range of tires. According to Mercury’s Andy Forsythe, you can still run a 2.25”-wide cross-country tire, and also go up to a 2.5”-wide all-mountain tires and have solid sidewall support for cornering without folding the tire in half.

Run a rim that’s too wide for the tire you use – ya know, fad wide - and you’ll feel a more distinct “drop off” feel in cornering traction, as the tire become too square. We ran them with a 2.3” Schwalbe Magic Mary front tire and Hans Dampf 2.3” rear tire (we'll be talking about those in a separate test piece later) just fine.

However, while width is cool, Mercury says the depth of the rim is going to be where you’re really finding the wheels’ strength, and the 24 mm deep X1’s are fairly middle of the road for their width. Keeping up with a design theory that revolves around not pushing things to extremes, Mercury uses 28 spokes front and rear, J-bend style Sapim Race spokes. Proven, extremely durable, and easy to find at any bike shop. Also, the nipples sit above the rim for easy tuning. 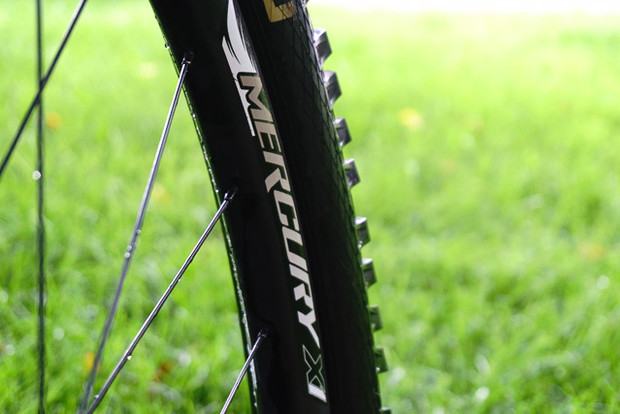 A hookless design is a little bit of work when mounting a tubeless tire, but we experienced practically no burping during our tests. Ryan Dunfee photo.

The X1s feature a hookless bead at the edge of the rim, which keeps structural integrity higher than machining a hooked rim, and reduce burping when running tubeless (we really didn’t get any burps), and sealed bearings to keep the dirt out with more middle-of-the-road engagement to keep durability up and maintenance down. 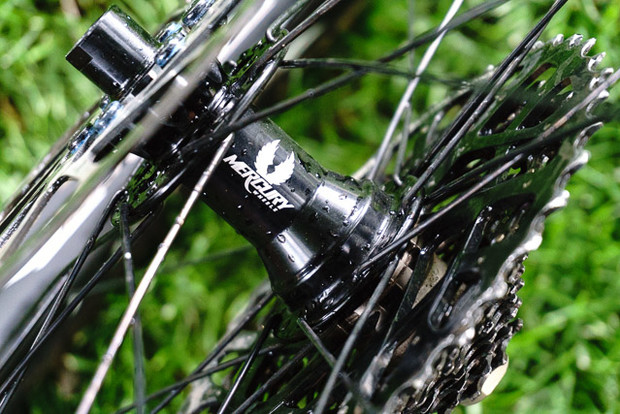 Mercury uses sealed bearings to keep out the dirt and middle-of-the-road engagement so you're not constantly needing to tear apart the freehub for servicing. Ryan Dunfee photo.

If you can’t already tell, the overall theme is durability, versatility, and ease of maintenance. The X1’s come with a two-year warranty and cheaper crash replacement rims. It’s also worth noting that, while almost every carbon rim manufacturer uses the same high-end Japanese carbon, Mercury maintains it’s actual the type of resins used to lay up those wheels, and the builder putting them together, that makes the biggest difference in ride quality. 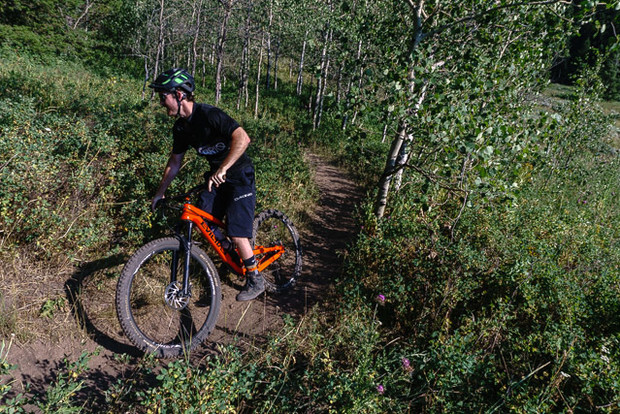 The X1's are actually surprisingly supple, so you're not getting knocked around while climbing or riding rocky terrain. Garrich Tischler photo.

The first thing I noticed about the X1’s is that they are not the ruthlessly stiff carbon hoops you might think they would be, or which you might assume would be the feel of all carbon rims. They are, in fact, quite a bit damper, absorbing a lot more trail chatter than you’d expect while still retaining most of the stout feel that is so addicting in the ride quality of carbon rims, where you can slice corners with aplomb and pump the trail for speed, feeling the acceleration through every g-out. The thoughtful bit of flex in the wheels makes them pretty springy, too, and they were always happy to help pop the bike into the air.

This isn’t necessarily surprising; pull the spokes on the X1s and then on a pair of Enves, and you’ll notice a bit more give with the Mercurys. The difference in feel between Ogden’s two carbon wheel companies is like that compared to rallying a pair of slalom skis versus a GS ski – the Enves are incredibly precise and have just about the sharpest “edge” of any wheel out there, and feel absolutely game-changing on smoother trails, but as things get rougher, they become more of a handful, with a harsher feel that demands you stay on your toes. 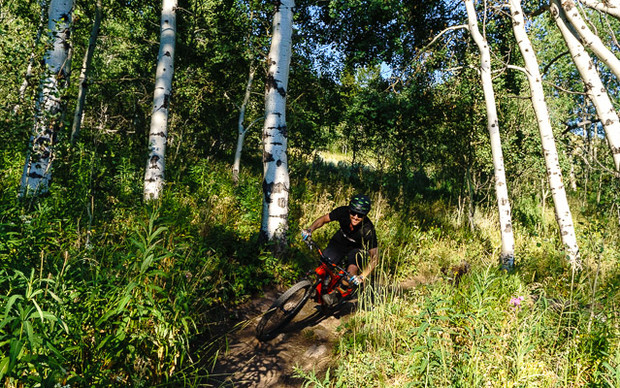 While retaining more of a GS ski ability to plow over chunder smoothly, the X1's are still plenty stiff when laying into a corner. Garrick Tischler photo.

But while the Mercurys might not have the same razor blade sharp feel in a berm and unrelenting stiffness that rockets you out of said berm, when things inevitably get rougher, they neutralize the trail quite a bit more, offering a smoother ride with less deflection - what happens when you hit the edge of a rock on a stiff rim and get knocked sidways. It’s a bit more nuanced of a feel, but one that will likely feel more comfortable for riders who aren’t full-blown experts, or who inevitably get tired over the course of their rides, or who spend the majority of their time riding chunky, blown-out technical terrain.

It’s also worth mentioning that, as someone who read horror stories of expensive carbon rims cracking after hard rim strikes, it was really surprising to hear that familiar “twang!!” of the rim bottoming out through the tire on a blunt rock as I screwed up my line and notice that a) it didn’t even sound or feel as violent as it had on an alloy rim, b) had no visible effect on the rim at all, and c) the rim was still running straight as an arrow despite it all.

After two months of rallying my Evil Following around Jackson Hole on downhill rides with little consideration to the fact that Peter Sagan probably has more travel when he races cross-country, there is just the slightest wobble in the rear wheel, but nothing that a few minutes with a spoke wrench won’t bring back in line. 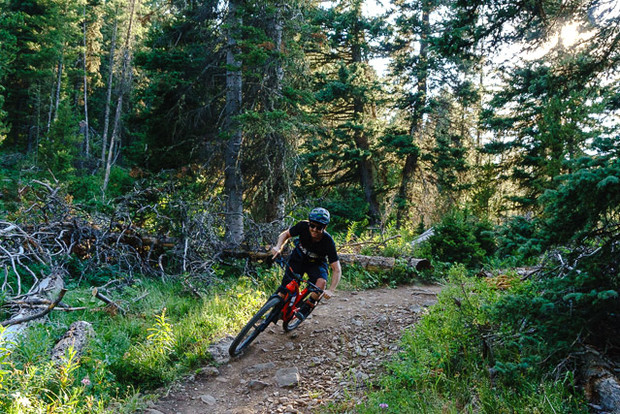 Mercury has achieved a nice balance with the X1's that retains the best parts of a stiff carbon wheelset while still feeling damp in bumpy terrain. Garrick Tischler photo.

It’s really hard to overstate how different the feel is of running a set of carbon rims on a mountain bike is; they’re probably the most transformative upgrade you can make (we’ll be diving more into this in a separate article), and at the mortgage-refinancing prices most carbon hoops price out as, they better damn well be.

And while weight savings actually isn’t as big an advantage of a carbon wheelset as you’d think – I saved just about 250 grams total going from my stock aluminum wheels to the Mercurys – the increased stiffness and strength is what you’re paying for. That strength translates into more of the power you push into the pedals converting into trail speed, more momentum generated and carried as you pump the terrain coming down, and far sharper and lighter handling in corners, just as if you got your skis back from the shop with a fresh tune. And like a freshly-tuned pair of skis, you’re not going to notice much difference going uphill; it’s really all about the down.

Mercury’s X1 carbon wheelset achieve a bit more of a middle ground with their feel, offering a noticeable increase in stiffness while still remaining damp enough to absorb the nastiness of rocky, blown-out Jackson Hole trails after two months with no rain. Riding the Grand Targhee bike park the other week on an Evil Following with just 120 mm of travel in the rear and barely any more in the front, it was pretty surprising that the resounding feel was “damn, this is smooth!” and not “Holy shit, why am I riding downhill on a bike with cross country travel?!?”

At $2,200 out of the door, the X1’s are still a wildly expensive upgrade to any bike, but come in several hundred dollars cheaper than the highest-priced plastic wheels on the market. However, as of press time, there’s a good number of better deals on the X1’s to be had across the ‘net.

For cycling, you must have a good cycle and try to spend more on your tires for strong grips on the mountains. I get a cycle review from http://www.resumehelpaustralia.com/ which helps me to pick the right one easily for myself.