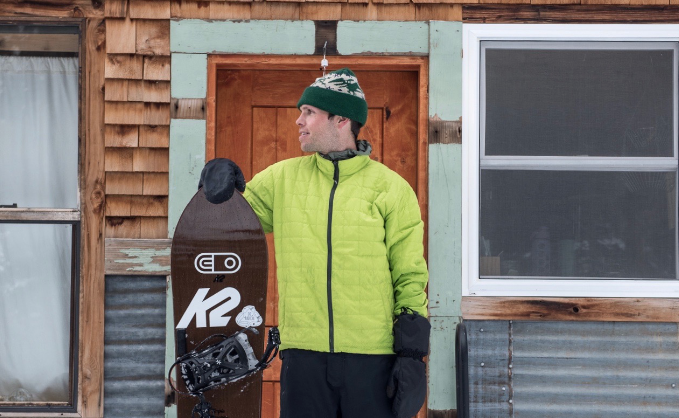 Eddy and his wife Hannah – who works as an artist - set out on a new adventure this past season, with a goal of approaching the season in an environmentally conscious manner. By utilizing splitboards and living out of their refurbished camper, the Eddys spent the season exploring their local mountain range on splitboards and working on their newly released book Split The Difference.

Split The Difference is a unique, inspiring and creative look at splitboarding, sustainability and adventure. As part of their ongoing efforts to use their voices for good the Eddys teamed up with environmental organization Protect Our Winters to spread awareness around global climate issues. Under the name Do Radical, the couple have been on a mission to educate mountain enthusiasts about how they can have an impact on climate change while having fun in the mountains. We caught up with Tim while he was on a recent book tour to talk about working with POW, living off the grid, and his ambitions as an environmental activist.

You’ve been involved in a lot of non-traditional snowboard projects over the last several seasons from Warp Wave to crafting media around your DIY home, what draws you to these creative projects?

I’m drawn to anything outside of the box and the excitement of the unknown. It keeps things interesting. I also love the fact that, when you are pursuing something original, there are no rules since it hasn’t been done enough to have set, traditional guidelines. That really opens up the door for creativity!

Do you think there is an increased interest in narrative-driven projects?

Absolutely! I think there’s a lot going on outside of snowboarding these days that people want to talk about. Whether it’s social, environmental, spiritual, et cetera. Snowboarding has this amazing connection to the bigger picture and people are interested. It’s a great platform to tell stories and share ideas. 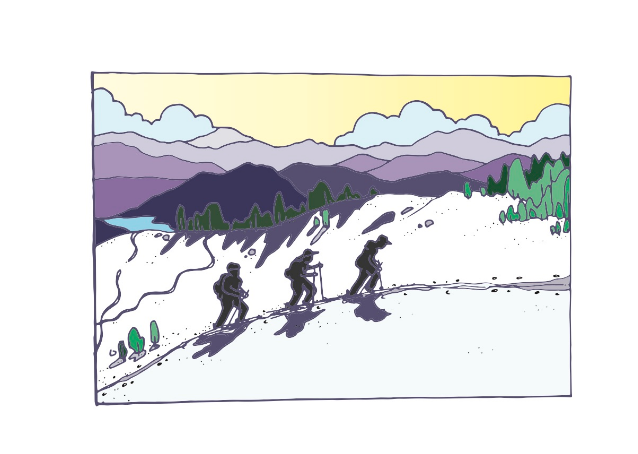 Your sustainable mini-home has gotten a lot of attention from both snowboarding and non-snowboarding media outlets, did you and Hannah know you were onto something special when you were building your home?

Honestly, that never crossed our minds until it was already getting the attention. We were just trying to build and create a project that we believed in. We were hyper-focused on the property and trying to satisfy our goals and ideas of living more sustainably. It was really amazing to then receive all the positive attention and feedback for our efforts. We had hopes that we could use the property to share ideas locally with friends and family, but it definitely went way beyond that and that was the best part of the entire experience. 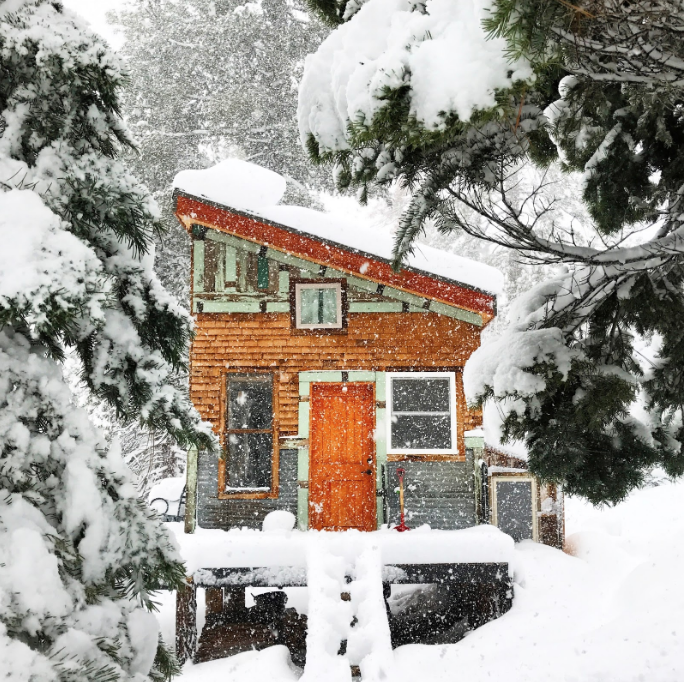 A lot of people just looked at the amount of snowfall that Tahoe got last year and thought it was an all around epic winter, but there was also plenty of violent weather. Were there any scary or challenging moments being off the grid in a mini-home?

Last season was epic in every sense of the word. It was glorious, a bit challenging at times, glorious, extreme and more glorious. We were actually living full-time out of our truck camper for the winter and it was the ultimate test. We had prepared for winter living in the camper and for the most part it was a success. We definitely had a couple leaks, a few breakdowns and some snow induced traffic. Aside from always having pow to ride, another benefit of the big snow was easy parking. With all the focus on keeping the roads clear, the police weren’t worried about overnight parking or us overstaying our welcome once we found a choice spot.

It seems like you’re becoming more vocal in your environmental advocacy, is there anything in particular that has encouraged you to become more engaged?

Snowboarding has given me so much and I feel like it’s my duty to give back. I’m honored to have gained a voice and I want to take full advantage of that and do something positive with it. The environment has always taken top priority in my thoughts so it only makes sense that I want to share my appreciation, especially in a time where the environment is put on the back burner so often. I’m also in a place with my snowboarding career where it’s not all about me anymore. I’m not interested in the constant pursuit of trying to ride the best conditions in the best locations just to feel slightly empty by the false sense of accomplishment. Don’t get me wrong, the act of snowboarding is huge part of my life and always will be, but if I can ride amazing conditions in amazing places and have some existential substance behind it, well that is the ultimate! 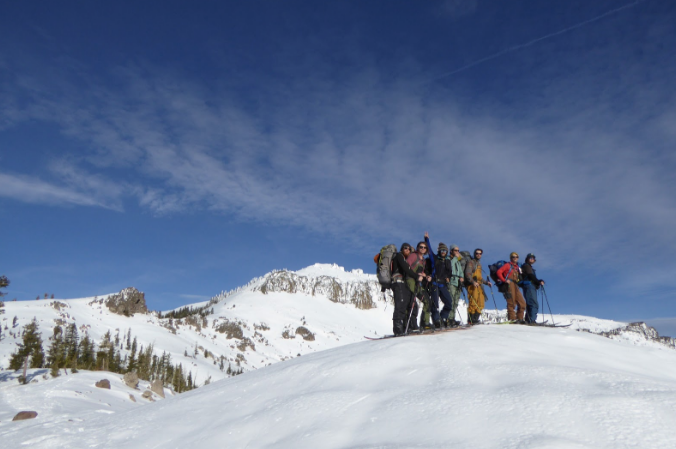 We all get by with a little help from our friends. Photo: Courtesy of Tim Eddy

Now you are working on a splitboarding book called Split The Difference, how did you and your wife Hannah concept this project?

We were both looking for a way to share our appreciation for the human-powered experience of splitboarding and the environment through a fun and approachable perspective. I’ve also worked on so many projects over the years that I wanted to create something that would give back to the greater good of snowboarding and hopefully the planet. That’s why we are “splitting the difference” and giving 50 percent of the proceeds to Protect Our Winters. Once we started formulating the idea for the book and supporting the non-profit we were so inspired that we never looked back.

Will it be primarily illustrations and narrative or is it a mix of documentation and art?

It’s a mix of art, stories, photos, how-to’s, how-not-to’s, jokes, food, lists, ideas, and such. It’s lighthearted but touches on some interesting topics as well.

Where did you travel to for the project?

We had big plans of traveling all over North America but with the incredible amount of snowfall we barely left our home mountain range, the Sierra Nevada. Every time we would start packing up the truck to hit the road the local forecast would look too good to leave. It was amazing; we just shopped for snow locally! 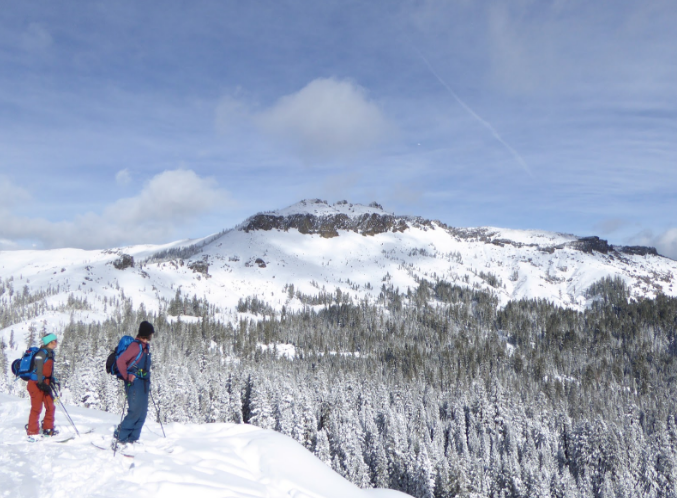 Getting ready to drop after a self powered ride to the top. Photo: Courtesy of Tim Eddy

Are there any tales from the road that standout?

There were so many awesome stories from the season, but it was the overall vibe of living in our truck camper without season passes and just splitboarding that stand out the most. The feeling of waking up with no resort powder panic, unlimited mountains to explore, and having the freedom to sleep in the back of our rig.

How did you link up with Protect Our Winters, what is it specifically about POW that made you want to dedicate this project to them?

We just reached out and told them what we wanted to do and it was an easy pitch. They’ve been really receptive to our project and stoked on the concept. We wanted to support them with our project because they are the voice of the snow community. They’re the ones representing on the frontlines at the White House, organizing activism, and making sure we snow enthusiasts are heard. 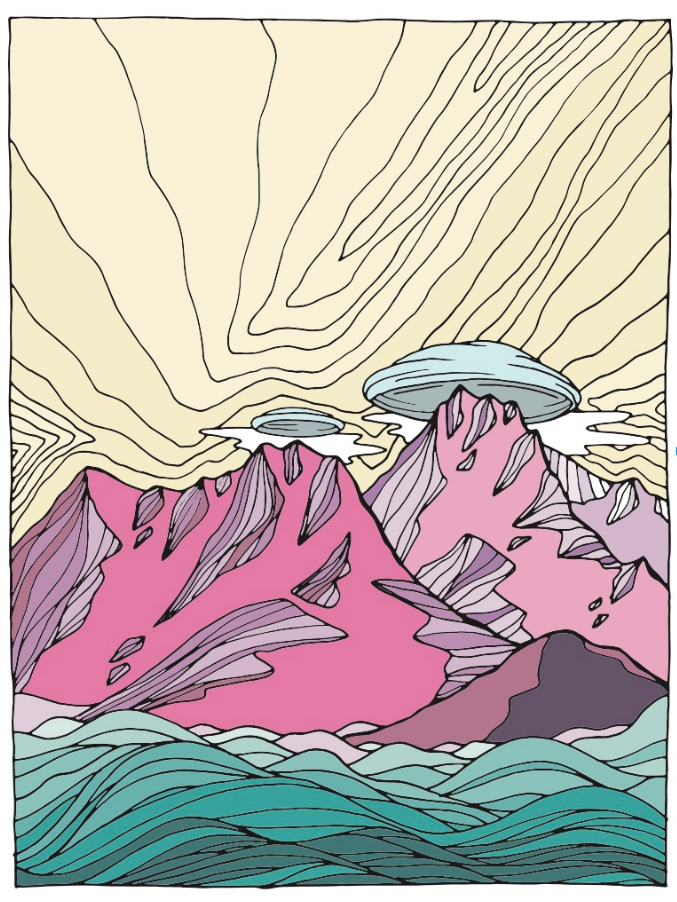 If there is one takeaway from this project that you hope people will put into action, what would it be?

To know that our choices make a difference! If we can all look at things a little outside of the box and make decisions based on what we believe in, we have the power to make positive change!

Where can people find more information on or buy the book?

Info on the project can be found on our website doradical.com and our Instagram @doradical. The book will be available on our website and a small number of select snowboard/ski shops. Or if you catch us in person we’ll always keep some stocked in the truck!

La Paloma Theater was the place to be in Encinitas, CA on Wednesday night. Taylor Fry photo. Mountain Revelations, TGR’s latest snowboard film featuring Ryan Hudson, Rafael Pease and Jeremy Jones premiered at La Paloma Theatre in Encinitas, California on Wednesday night before embarking on a nationwide tour. The film tells the story of the three professional snowboarders on a 10-day foot-powered mission into Alaska’s Chugach Range, where they explore epic lines and reflect on their

Third place winner Molly Armanino with a huge huck into the chunder! Kings and Queens of Corbets 2022 was one to remember! | Max Ritter photo. And that's a wrap! After an epic week of skiing and snowboarding around Jackson Hole Mountain Resort, the group of athletes that gathered here for Kings and Queens of Corbet's 2022 finally got to show what they were made of on Thursday morning. After six weeks of high pressure left the Tetons with some very challenging snow conditions, nobody was