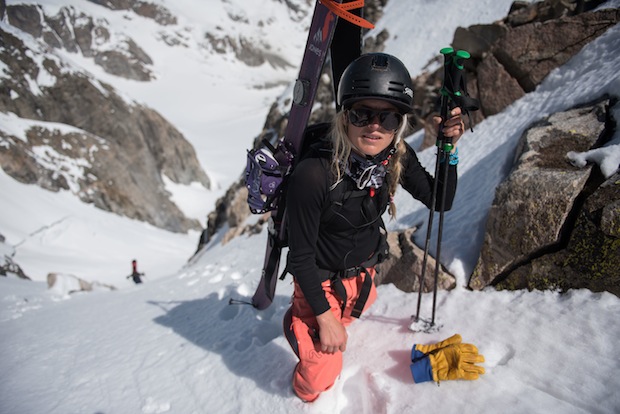 It unfolded like a typical sufferfest. The 13-mile hike spiraled into a two-day gruel-athon with temperature swings, rain, isothermal snow, mud, swamps, slush, and postholing. It was June 2, 2016, the first day of summer and day one of pro splitboarder and environmental activist Halina Boyd’s dream expedition to summit and snowboard Gannett Peak, the highest peak in Wyoming.

The trip was enabled by the Jones Adventure Grant which Boyd received in February—a $3K annual award to help support adventurers who are showcasing untapped backcountry in their own backyards. Given that Gannett's primary access points are only 1.5-hours from Boyd’s home in Jackson Hole, her interest in the peak had been brewing for close to eight years. 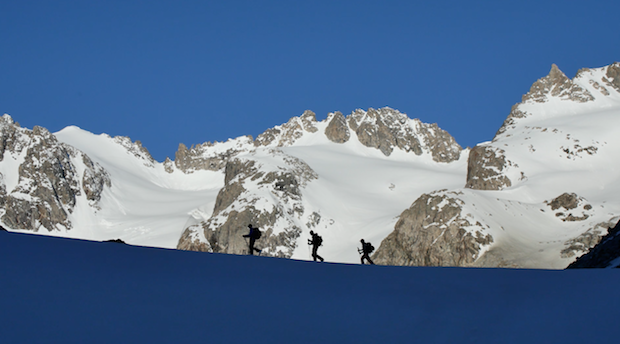 Halina and crew heading on the approach. Upcoming film by Aharon Bram.

Indeed, the crew had their work cut out for them. Gannett is a challenge to summit not only for its height, ruggedness, unruly weather and harsh winds, but due to the fact that it sits in one of the most remote wilderness areas in the Lower 48. No taller summits stand within hundreds of miles of the isolated peak.

At 13,809 feet, the granite behemoth is Wyoming’s tallest top-out and the northern end of the Wind River Mountain Range. More than 2,300 lakes fill the Wind River’s glacial-carved valleys and cirques, which are home to 7 of the 10 largest glaciers in the Lower 48—five of them are on Gannett, including the largest glacier in the American Rocky Mountains. 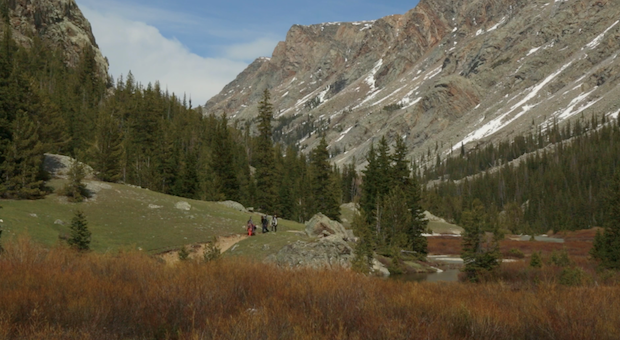 Rather than taking the standard 23-mile approach from Pole Creek Trailhead in Pinedale—which would drop them at Titcomb Basin—the team opted into a special permitted crossing of the Wind River Indian Reservation from Cold Springs Trailhead in Crowheart, WY. The latter option cuts the distance on foot in half.

Conditions allowed the crew to descend a couloir on Mount Warren, Le Dames Anglaises—which included Boyd’s first air over a hairy bergschrund—before slogging out the two-day return. Hands down, every bit of pain was worth the reward.

“The challenge of the adventure is really when we’re getting what we don’t really realize we’re seeking," Boyd said. "Anytime we go into the woods there are usually physical and mental challenges, which is the reward, ultimately.” 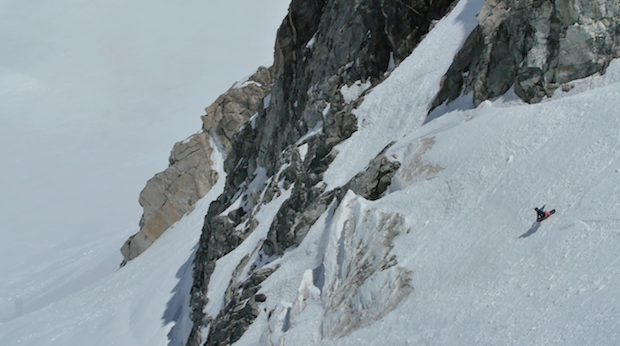 A desire to adventure and pursue team goals led Boyd away from the competition circuit a few years ago. Raised in Sebastopol, California, she learned to ski in the Tahoe area, switched to snowboarding at 10 years old, and was always driven to keep up athletically with her two older brothers. Growing up in a small liberal town, one of the first things taught in grade school was, Reduce, Reuse, Recycle. The seed of environmentalism was planted early.

Later, Boyd almost dropped out of Santa Clara University to pursue snowboarding full-time. Instead, she spent those years of living in the Bay Area and started a ski and snowboard club to bring the mountain community together for weekend trips. Post graduation, she moved to Jackson and her snowboarding career kicked off in the freestyle arena.

“I ended up getting really hurt doing a Red Bull freestyle event at Snoqualmie in Washington and realized, while it’s incredible what people can do in a terrain park setting, it wasn’t what I love about snowboarding,” Boyd said. 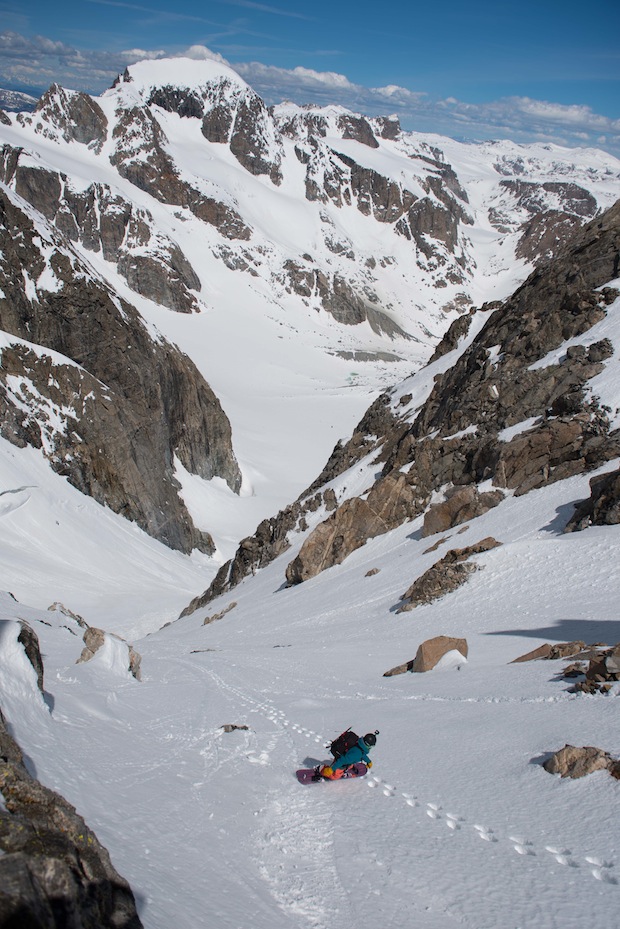 Boyd was back to the drawing board. She started to pursue the backcountry, which segued into meeting athletes who were competing in The North Face Masters of Snowboarding.

“I really enjoyed meeting riders on the tour, but I realized that the tour didn’t fit my personality. I’d always enjoyed bonding and pursuing a collective goal and I didn’t like competing for just me,” she said.

Five years later, in 2014, she teamed up with Jones Snowboards.

“You want a sponsorship relationship that’s unilateral,” said Boyd, meaning, “They will help your vision as an athlete come to fruition, and in turn, I adequately represent who they are. There are companies that I’ve worked with that were not the right fit and that’s okay. You learn throughout the process. The ones that are right are the ones that last.” 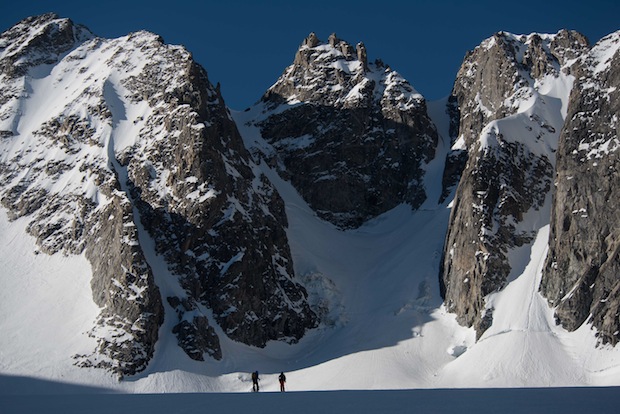 Boyd and crew at the base of Gannett Peak. Chris Figenshau photo.

All of Boyd’s hard work isn’t going unnoticed. Last month, she was invited to speak on a Shred Talks panel to benefit the Jackson Hole Ski and Snowboard Club and inspire kids who want to pursue snowboarding professionally. She sat alongside Travis Rice, Hana Beaman and Lance Pitman: a handful of her biggest idols in the sport.

“It was surreal. When you’re working hard, it’s rare that you get time to pause and reflect on what you have accomplished. It was an honor to be a part of the event and that to help teach others, too, as I try to create my dream,” she said.

Each athlete had her or his own unique path but one unanimous message: “Do not get lost or caught up in the industry’s demands, expectations or attempt to mold you into something you don’t want—because otherwise you get burned out,” said Boyd.

Boyd shows no signs of burnout. On deck, she’s heading to Alaska this spring to sharpen her mountaineering skills in preparation for a 2018 film project in the Himalaya which she scouted last year. The story will include a snowboard descent, most likely near Annapurna Base Camp, and document the impact of climate change in the area.

“My love for these fragile ecosystems and seeing how they are being affected by climate change has ignited this fervor and flame to do something about it for future generations to experience snow and the joy of snowboarding—it’s become that serious of a crisis. I don’t have an option at this point. Whatever I can do in my career or momentum to tie in that broader crucial message, I have the responsibility to do it.”

So, Boyd is training to become the Wyoming chapter leader for Citizens’ Climate Lobby, a grassroots advocacy organization that helps to bridge the dialogue between state locals and their representatives. The ultimate goal is to garner enough gather enough support to pass the Carbon Fee and Dividend Policy. Boyd will be a facilitator for locals to learn how they can help and will also meet with local representatives.

“I like the approach of developing interpersonal relationships in order to get around a bipartisan government—that’s the only way can understand each other and one another’s concerns,” she said. 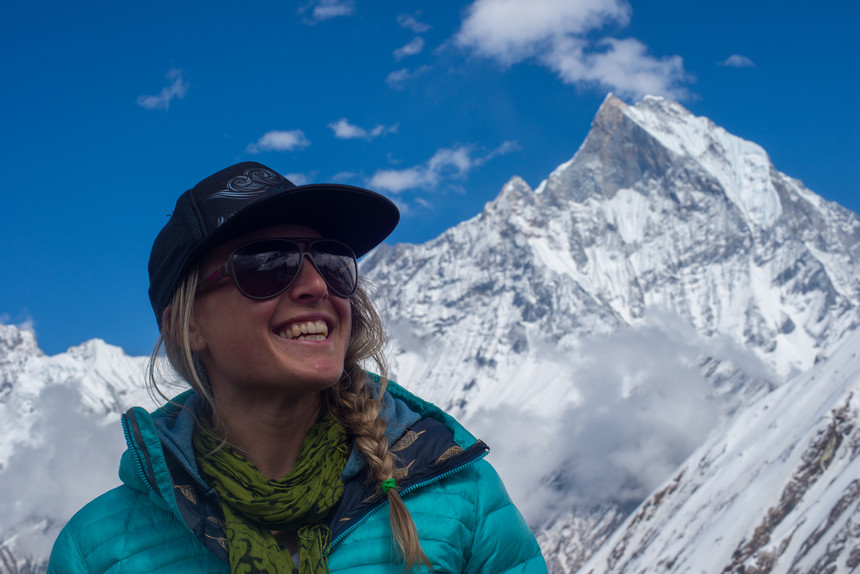 I have read some good stuff here. Definitely worth bookmarking for revisiting.
http://www.frivonline.club/

I wonder how a lot attempt you place to create this type of wonderful informative web site http://www.frivhome.xyz/