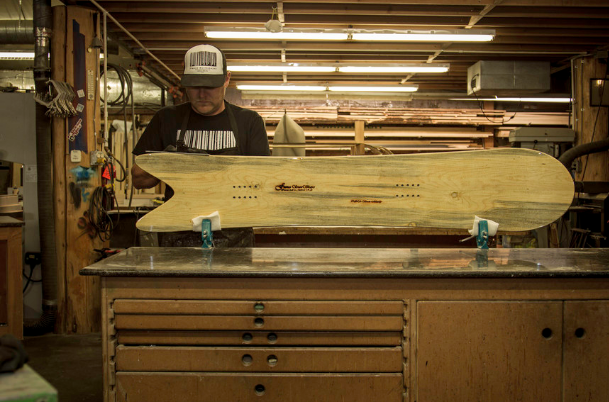 You’ve heard the phrase paradox of choice. You’re walking down the shopping aisle, and you start to feel slightly overwhelmed. There’re just WAY too many options. Right? Uh—nope, not always true. Now 13 years after Barry Schwartz wrote a book on the theory, studies show that the paralysis of options isn’t an absolute.

We can all go ahead and put snowboarding’s domain into the other ‘more is more’ category and agree that next season’s swell of innovative new gear and boards is just plain sweet—even if there are more options than you’ll know what to do with. And the best and freshest products aren’t just for dudes—they’re also for the kids, ladies, and newcomers.

Beyond the shred-stick varieties, sleek apparel and clever hardgoods there’s also a cultural renaissance that’s brewing in the snowboard community. It’s an awesome time to be a rider. 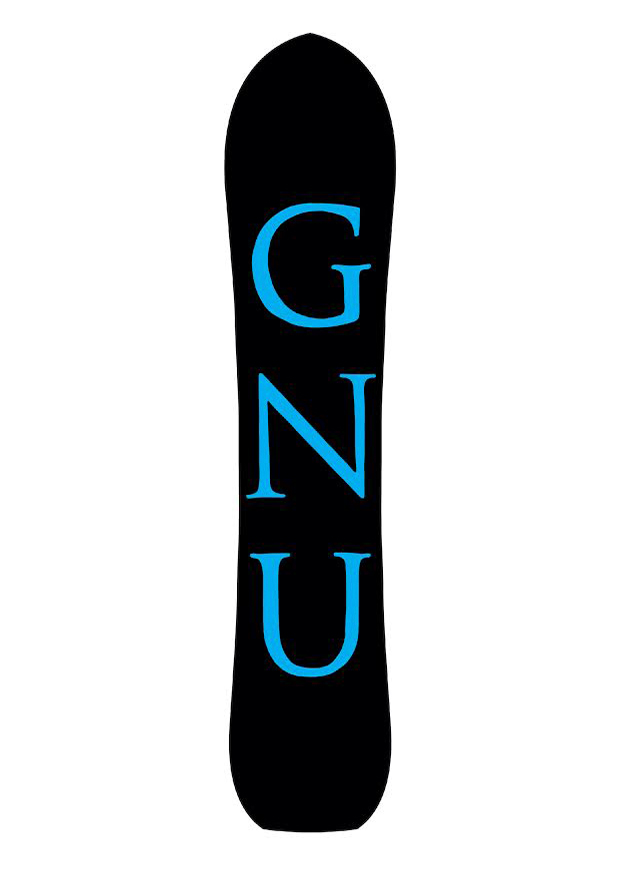 Base of the GNU Free Spirit.

Avant-garde snowboard shapes are about soul riding: A boarder’s pursuit of pure surf on waves or snow and flowing with the lines of the terrain. Around 2010, we started to see more interesting silhouettes trickle back into the U.S. scene, which was a full-circle resurgence from the playful shapes that were introduced by the sport’s earliest pioneers in the 70s (like Winterstick Founder Dimitrije Milovich patenting the first modern Swallowtail design).

Corey Smith founded Spring Break snowboards. Jackson Hole’s Mikey Franco—founder of Franco SnowShapes and former snowboard instructor and guide—began shaping boards, too. He’d gotten quite, er, lucky with an injury on a Japan pow trip: In lieu of shredding, he met the father of Japanese snowsurfing Taro Tamai, master board shaper and founder of Gentemstick. What he learned during that trip ultimately led him to hand-sculpt boards. 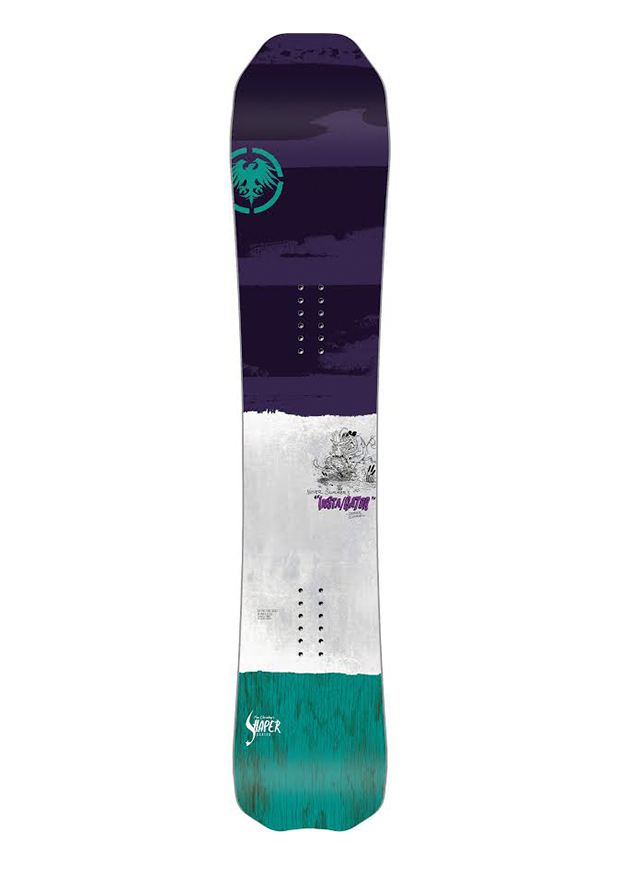 Traction hit, board creators’ curiosity continues to flare. Next year included. Quirky, odd outlines are debuting for everybody—men, women and kids. Alternative shapes also experiment with volume distribution (yep, shorter and fatter rides), which are more compact and thus maneuverable. Not to mention the menu of profiles—don’t even get us started on countless options of camber, reverse camber, early rise combos. 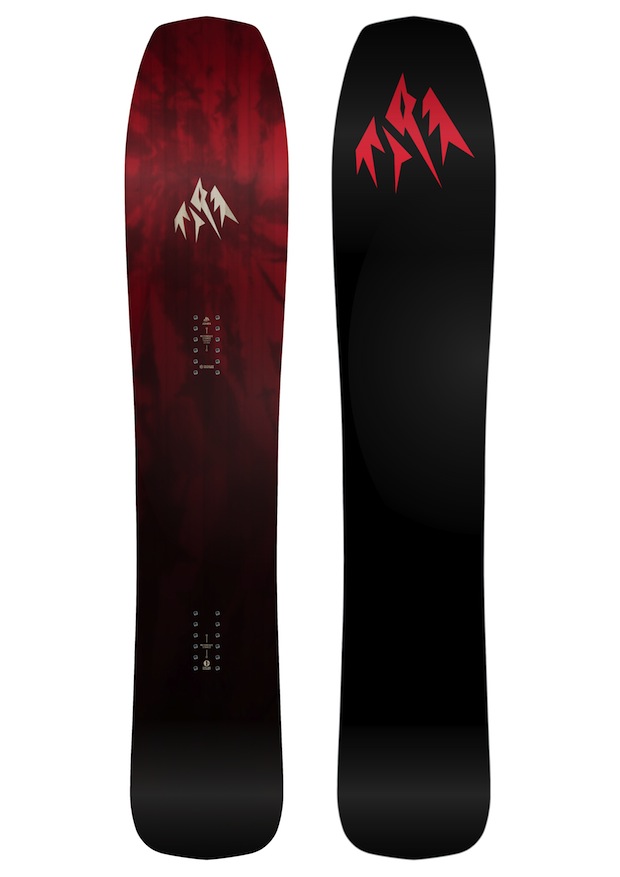 The Jones Mind Expander all-mountain and ocean-inspired board created in collaboration with surfboard shaper Chris Christenson.

Many shape-driven boards are made with powder days and backcountry sessions in mind, but creators likewise focus on delivering an all-mountain appeal so the board isn’t squirrely and can be ridden through variable terrain. To name a few: Rossignol is introducing the XV Sushi, a directional and tapered shape with a swallowtail that’s made for floating deep fluff. Rome is bringing out the geometric Gang Plank Mini for little rippers. And Never Summer is bridging the current men’s Insta/Gator into a women’s specific version.

Also, more snowboard manufacturers are offering their full line-up—including the high-end boards—as demos at shops, like Never Summer, Nidecker and Arbor. Though not necessarily of the crazy-shape variety, having top-tier board rental options is great for new riders who are getting into the sport and for traveling veterans who just don’t want to fly (or break the pocketbook) with their setup.

Volcom commissioned Whistler BC-based artist Vanessa Stark to create a painting for the exterior of the Act insulated jacket. A portion of the proceeds support Boarding for Breast Cancer (B4BC), an organization that provides preventative breast cancer education and support programs for patients and survivors. Stark is a passionate snowboarder who creates self-coined “mountain-style” art, a title for the rising genre that’s inspired by mountain life. For this project, she was given a specific color pallet and full creative reign. The result is a whimsical fox face surrounded by a Pacific Northwest forest and a sky that resembles the aurora borealis and Vincent Van Gogh’s Starry Night. Sound familiar? Elena Hight was rocking the jacket when she won the ladies’ X Games gold for superpipe. 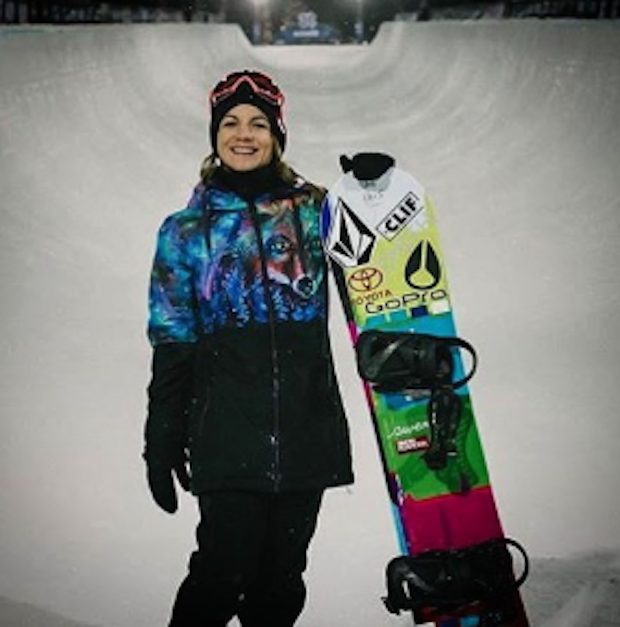 Stark is just the beginning in a queue of passionate snowboard-artists who are adding their creative touch to upcoming products. GNU’s next Jamie Anderson pro model—called the Free Spirit—is set to showcase another all-original masterpiece of artist Sarah King, also located in BC. 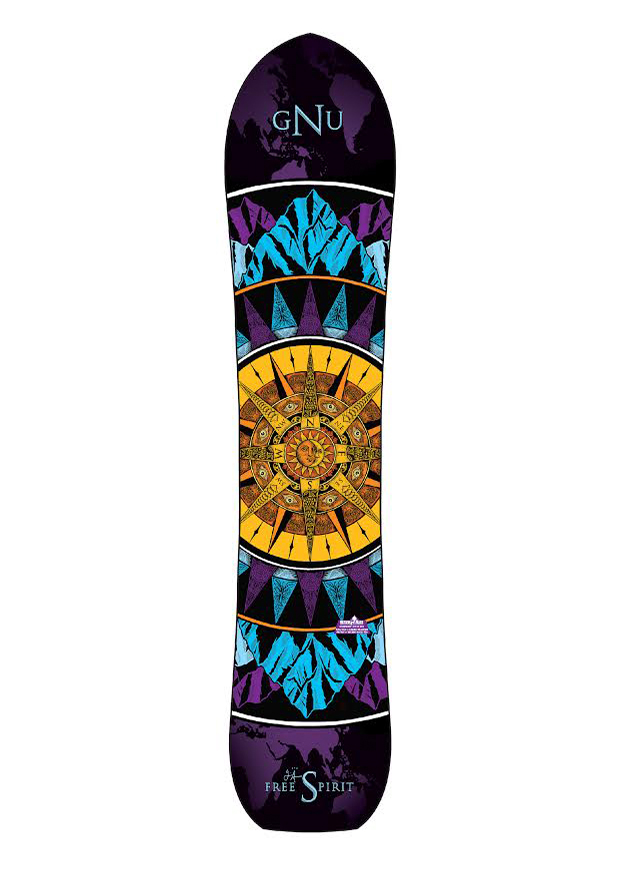 And keep your eye out for Dakine outerwear: Austin-based illustrator and designer Denton Watts created hand-made linocuts to print Northwest-inspired images like elk and wolves onto the men’s interior fabric. Bold and striking, his work reflects edgy tattoos and American folk art.

Bibs aren’t a new thing but seeing so many brands focused on designing a functional pair for women is. Can you imagine how hard that would be? One size does NOT fit all and you’ve got all the curves to consider. (Ladies, get stoked for new options!) The surge of backcountry shredders, splitboarding, and deep snow outings is also influencing the bib demand—which means breathability, comfort and functionality are that much more critical. 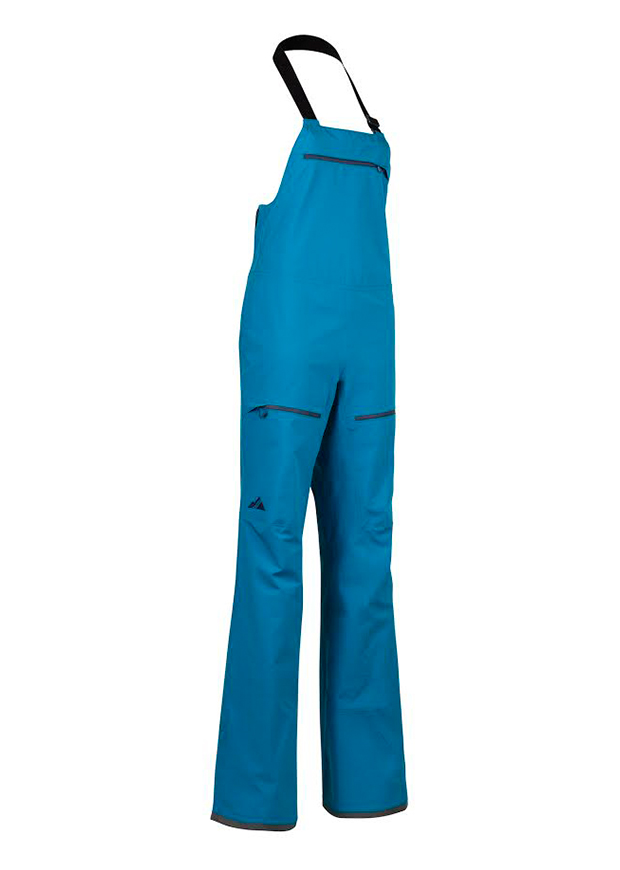 Strafe nailed it with the Scarlett Bib that won SKI’s Hot Gear award and features a patent-pending drop-seat that allows ladies to do their business without even taking off their jacket. Also for women, the North Face is introducing the harness-friendly Fuse Brigandine Bib for alpine and all-day conditions riding, hiking and climbing.

Dakine debuts the Stoker for men, which was born from a paradigm shift. Yep, the design is inspired by a ladies’ product, Product Line Manager Amy Eichner explained in our interview for the Snow Show Daily. While working with their male athletes to design the brand’s new line, the dudes were asked to describe their ideal bib. Lads wanted a ton of pockets and a drop seat that was designed as well as the ladie’s Beretta 3L bib, one of the most popular and best-selling pieces for Dakine. 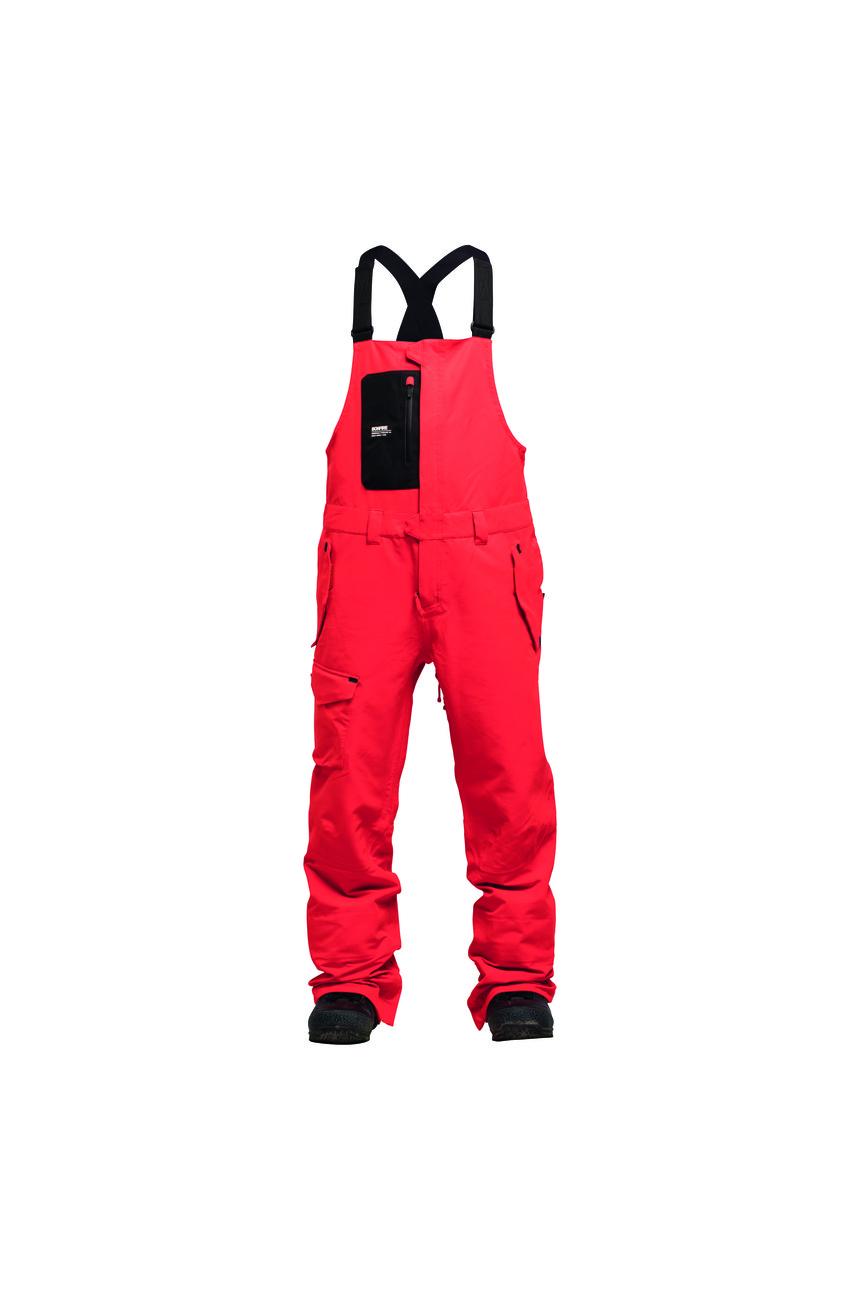 Backcountry riding continues to evolve, and women—though, a smaller population than the guys—are a part of that growing circle. More women’s only avalanche safety and splitboard courses are being offered like Aspen Alpine Guides’ Leave the Boys Behind program and Backcountry Babes. A handful of brands are stepping forward to grow their offerings for women beyond just one or two board options while others are debuting firsts for the niche within a niche. 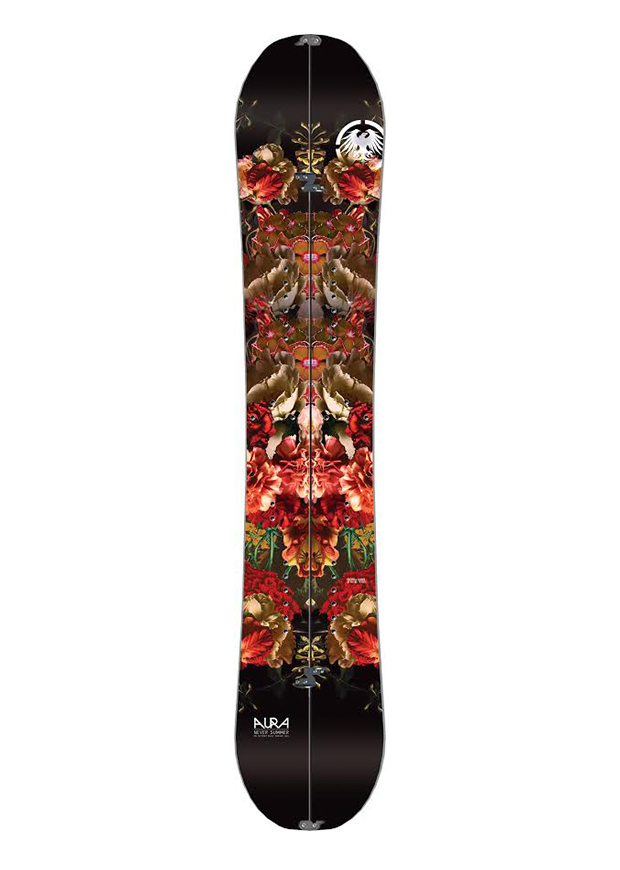 One huge inspiration behind Weston Snowboards’ tiny home was to have a mobile retail space and classroom where shredders could connect. This year also marks the inauguration of a new snowboard specialty market trade show, called Parts & Labor, which overlapped with January’s SIA (SnowSports Industries America) trade show. 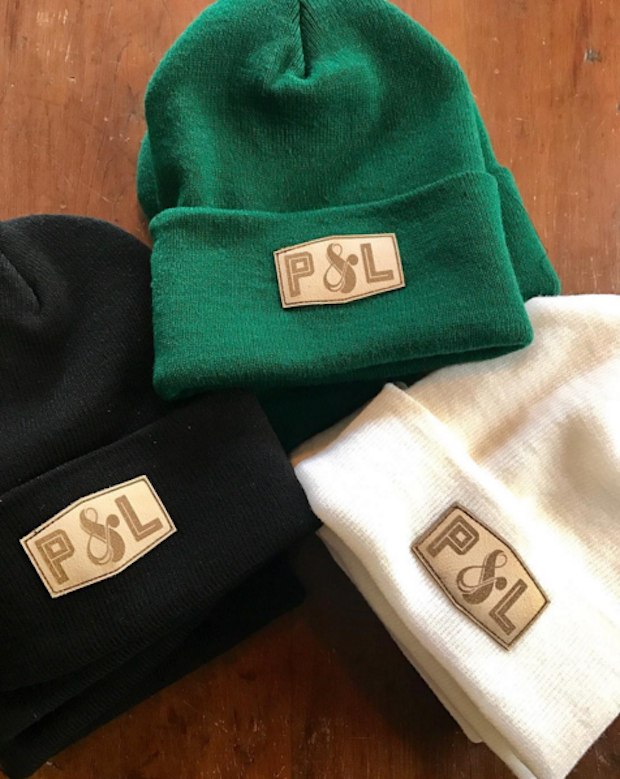 Parts and Labor branded gear for the debut market. Photo courtesy of P&L.

Created by United Shapes Owner Steven Kimura and Nightmare Snowboards Founder Joe Suta, P&L is solely a snowboarding exhibition, much smaller than SIA—close to 50 exhibitors versus 400 at SIA—and innately delivers a tight-knit vibe. A handful of longer-established brands like Rome and Spark R&D were present at both shows, while other small companies (maybe some you haven’t yet heard of)—Tribe, Yes, and Public Snowboards—were only at P&L. With a wall-free, no-back-room style, the brands occupied Cluster Studios, a 22K foot co-working space in Denver. Discussions, workshops and seminars were on the menu.

Read more about P&L at www.partslabor.us.

P&L reflects the growth of the snowboard industry. Grassroots brands are popping up and may not be able to afford to attend the larger SIA trade show. The new-style marketplace is also a testament to the community’s desire to not just chat about annual snowboard gear trends at a trade show but to reconnect human-to-human and reinvigorate that first priority: community.

Must be like to visit here this great article it is the amazing have to look here disable touch screen windows 10 and access the all windows touch screen function on the computer for batter work.