Editor's Note: This story is part of TGR's new column "Base Camp," which will explore the places different in the outdoor industry call home. Whether van, house, or shack, Base Camp not only focuses on the dwelling but how the place is a direct representation of the people who live there. 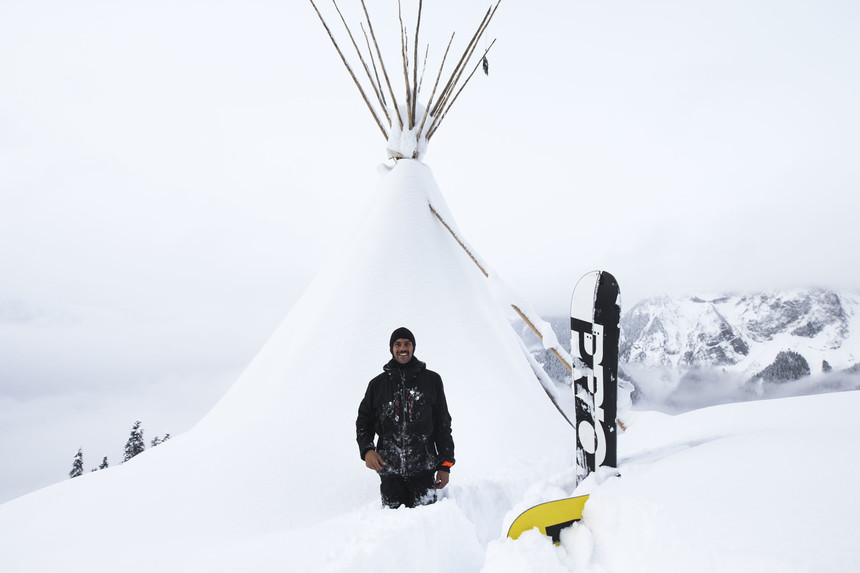 The teepee master himself, Mason Mashon, standing in front of one of his tents. Mason Mashon photo.

Ever since moving to Whistler from Vernon, BC in 2005, Mason Mashon has made a life out of exploring the rugged Coast Mountains year-round. An accomplished photographer, Mason is also one hell of a rowdy mountain biker, specializing in raw, big mountain lines. In the winter, he prefers the simplicity and solitude of pow surfing—snowboarding without bindings. Regardless of the season, Mason feels most at home when deep in the mountains, and creating his own backcountry lodge became the next step in his progression of spending more time in these sacred places. As the owner of several teepees, Mason taught his friend, pro skier/adventurer Rory Bushfield the finer points of erecting teepees, and Rory dove in headfirst, acquiring several teepee canvases of his own.

While waking up on top of a powder covered pillow line just as the storm is clearing sounds ideal, it does not happen without a ton of work and a bit of suffering. We caught up with Rory to ask him what he learned from Mason and how his teepee experiences have gone. 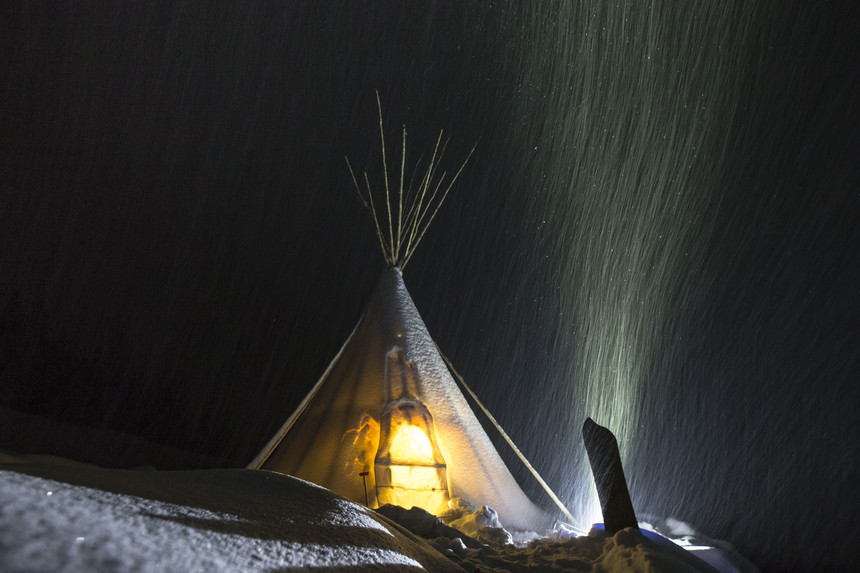 TGR: When did you first get involved with erecting backcountry teepees?

Rory Bushfield (RB): Mason’s been messing with teepees the last couple of years and last season he threw his up out in the backcountry and I actually started living in it. I liked it so much I got my own and had Mason teach me how to erect it. Its not the easiest thing to put up, you can do it wrong. Without Mason I would have struggled way more, but if you do it right, they can be easy to put up.

Do you cut down the poles on site, or bring them into the zone?

RB: Depends where we are. It’s nice to get them on site, but it’s a lot of work to harvest the poles. It’s almost easier to get them in the valley. Last year we used a helicopter and long lined them out to the glacier since there are no poles out there. We have long lined them in, sledded them in, hiked them in. Once they are dried out, those poles are super strong and super light. Whenever I have had a teepee with Mason, we just leave our poles behind, stash them somewhere, and the next time we come back we just bring the canvas. 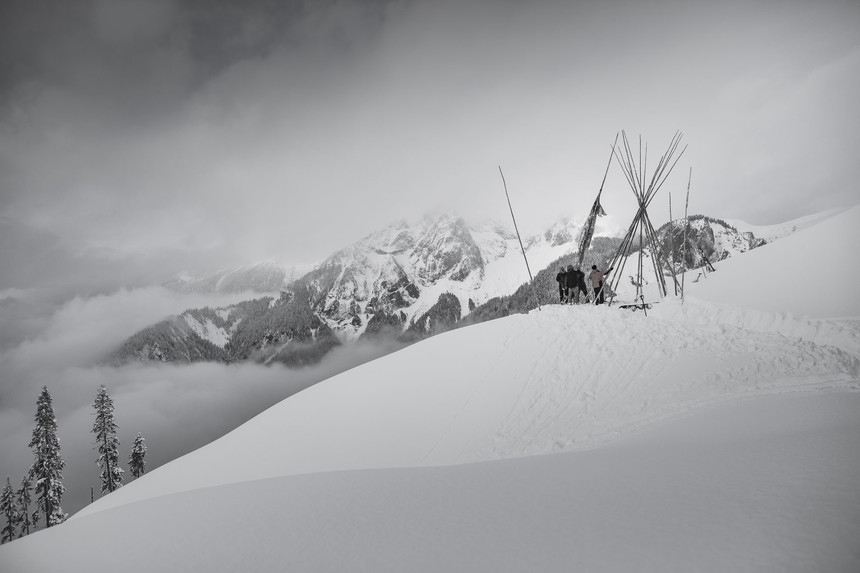 Bushfield and Mashon have perfected the science of erecting a teepee. Mason Mashon photo.

How many poles does it take to erect a good teepee?

Once you have your poles ready, what are the next steps?

RB: You take your four biggest poles and you tie three of them together to form a tripod at a certain height and that height is according to how tall your canvas is. You put all your other poles up then you lay your canvas out on the fourth pole–called the hang pole–and tie the bottom of the canvas to the end of the hang pole so there is a little bit of pole coming out the bottom, then you stand that up against the other poles in the opposite place you want your door. 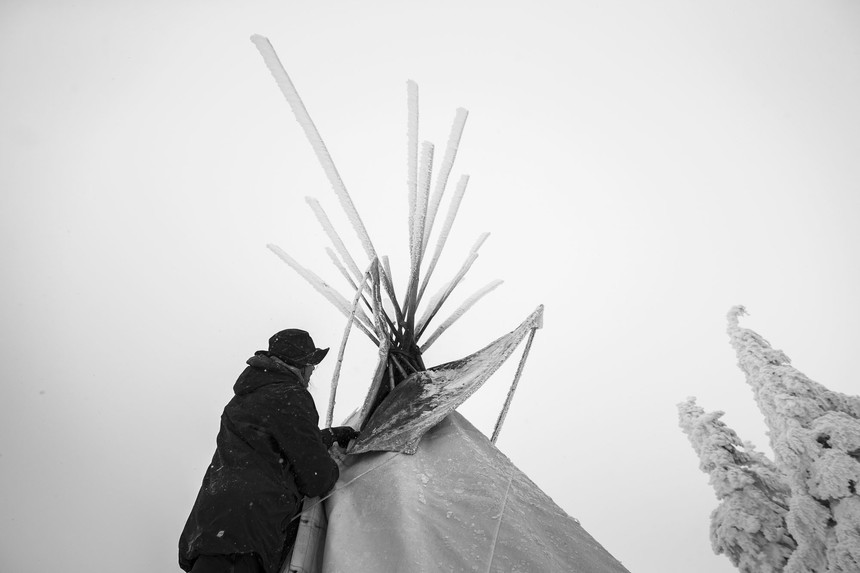 It's not always the easiest work pitching a teepee in a driving snowstorm, but Mashon and Bushfield have the routine pretty well rehearsed. Mason Mashon photo.

How does it hold up to the alpine elements?

RB: You can put them in really windy places because the cone shape cuts right through the wind. You can expose them pretty good, that’s what is so beautiful. If you get a direct wind into your doorway then I guess that’s trouble, but otherwise it just cuts through the wind and almost pushes the teepee into the ground.

What is the coldest night you have spent in the teepee?

RB: It was like -25C (-13F) last winter, and we put the teepee up with the door directly to the north, so we could take in this epic view, but we had this north wind blowing right into the door. It was horrible. Must have been like -50C (-58F) with the wind chill. 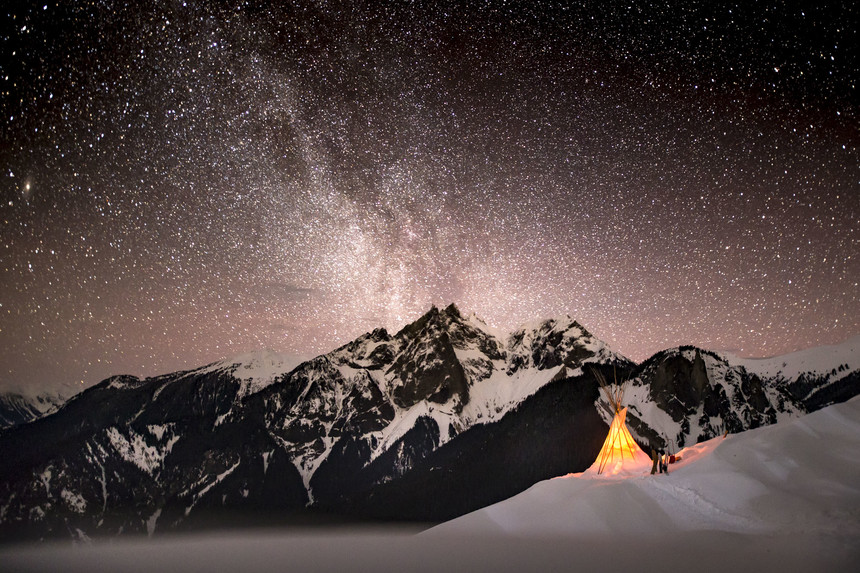 You don't have to worry much about light pollution when you're deep in the backcountry. Mason Mashon photo.

What about a fire? Does that help much?

RB: Yes, but if the wind doesn’t blow right, the smoke swirls and comes back down in, though a little bit of maintenance on the flaps helps fix that. If you have wind that switches directions a couple of degrees every gust, that’s a hard thing to deal with, because when the smoke swirls around and completely stops the flow, you’re living on the inside of a fireplace. You need the smoke to go directly up; that airflow keeps the vacuum going which creates suction, and then it works great.

After all the hard work and suffering, what is the payoff?

RB: To nail a storm and wake up and be the first ones there ready to go when everyone else is struggling down at the trail head. Also, to nail a sunset and just hang at the teepee is pretty all-time stuff. It’s a lodge, it’s a backcountry basecamp lodge. You can do two or three runs, completely soak your goggles, your gloves, then go to the teepee, light a fire, have lunch, dry out. 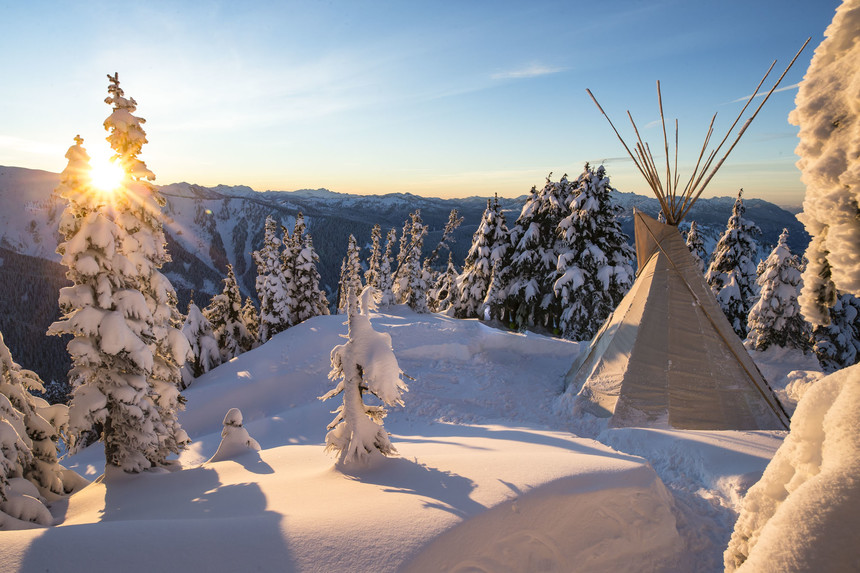 When you're miles away from anywhere, you don't have to worry about fighting for first tracks in the morning. Mason Mashon photo.

This Snowboard Company Operates Out of a Tiny…

While waking up on top of a powder covered pillow line just as the storm is clearing sounds ideal, it does not happen without a ton of work and a bit of suffering. We caught up with Rory to ask him what he learned from Mason and how his teepee experiences have gone.christmas coloring pages for adults
Multiplication Table chart
complaint letter template
usps priority mail tracking
roman numerals converter
what is the quadratic formula
how to do implicit differentiation

it does not happen without a ton of work and a bit of suffering. We caught up with Rory to ask him what he learned from Mason and how his teepee experiences have gone.
tutorialsweb

It seems obvious that when confronted with a half-ton wild animal, one should generally head in the other direction. And yet, every summer there are new videos of people having unfriendly run-ins with wild animal(s). Bison are often the culprit, probably because they have an outwardly-docile demeanor and look somewhat like cattle. RELATED: Stay Stoked- Your Guide to TGR's Best Content Perhaps having seen some of the aforementioned videos, Bozeman-based TV reporter Deion Broxton clearly had no

A List of the Greatest Action Sport Movies of All Time

A List of the Greatest Action Sport Movies of All Time

We’re approaching the holiday season and in honor of the long lazy days that lay ahead, we’re putting together a list of all the best action-sport related movies that have ever graced the silver screen. That’s right, Hollywood baby. This will not only give you an excuse to duck out early from that dreadfully exciting game of Scrabble, it will also stoke you out for ski season, which if it hasn't hit you already, is right around the corner (please be true). So buckle up, or unbuckle,