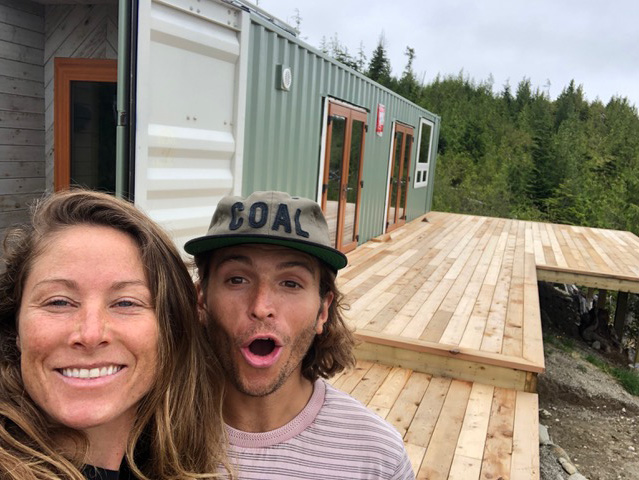 Shipping containers used to have a simple existence. At most, they were a method for transporting objects from one place to the next. Cargo ships, trains, and industrial shipping yards were their homes. Now they’re becoming homes themselves. It turns out that these lego-like boxes already have the perfect ingredients for an eco-friendly tiny home. Plus, there’s no shortage of them. Currently, 14 million containers are out of commission. Rather than dump them all in a landfill, cargo-architects are converting them into all kinds of recycled structures ranging from tiny homes, chic office spaces, urban miniature farms, to even backyard pools. The opportunities are endless, that is, if you’re willing to think outside the box.

RELATED: How Wintertux Built a Backcountry Skiing Oasis in the Remote Sawtooths

Sierra Nevada Snowboarder Robin Van Gyn first got ahold of one for gear storage. But once she was standing inside the 45-foot container, she realized that the 300-square-foot space was more than enough to be a home. Teaming up with fellow snowboarder and boyfriend Austen Sweeten, the two went to work making the box into a humble abode. Sourcing a decommissioned container was the easiest part of the process. Based on British Columbia’s Vancouver Island, there are plenty of shipping yards that have lots of options to choose from. When she brought it back to her plot of land in the woods the real work began. Over the course of three years, Robin and Austen have been slowly working away at the container.

Part of the reason it’s taken a bit longer to covert is that they’re committed to living off the grid. Figuring out how to harness clean sources of energy and capture rainwater isn’t straightforward. But after hours of research and trial and error, their home has all the amenities you’d expect with the added bonus of having a small carbon footprint. We sat down with Robin to learn more about the process and tips she has for aspiring eco-friendly homeowners.

A huge priority was giving the structure a sweet set of doors and windows. Robin Van Gyn Photo.

What inspired you to build out a shipping container?

Robin: Well actually we got a shorter one for storage and when we got inside realized it was spacious and pretty affordable. We thought it would be more fitting for us to do something on a smaller scale and with recycled or upcycled material, that way we could feel better about building. The place we live is so wild, so it only seemed fitting to at least attempt to keep the impact low on the land and on resources.

The kitchen coming together nicely. It wasn't easy making it off the grid, but Robin figured it out. Robin Van Gyn Photo.

Did you rely on any particular resources for the build?

Robin: We tried to do used or salvages as much as we could, so we were relying on salvage yards and Habitat for Humanity ReStores to get materials and that is not an easy undertaking as we realized. You have to visit these places a lot to find good materials and often become picky about what you’re using. I did a lot of back and forth and storing of things I knew I was going to need later. But in the end, it felt really rewarding to put this material to use and a lot of the salvages stuff is still great, it just needs to be cleaned up.

What’s been the most challenging part of the building process—anything that caught you off guard?

Robin: You’d think it's obvious to be building out a box, but it's not. There are bows and twists that you can’t see and you wouldn't notice it until the final steps when you put other ACTUALLY straight material on it. Then you have to make up for it somewhere else, there was a lot of improvising and I had to let some esthetic things go and let it be imperfect. I also think the learning process for an off-grid living was a bit trickier than I thought. Austen and I spent hundreds of hours researching how to get solar and wind and water catchment, it's a lot of information to sort through and a lot of additional learning.

Is there anything unique about your container—aside from being in a recycled container?

Robin: The outdoor space. We did a salvaged cedar deck, which doubles the square footage of the footprint so that we have a ton of epic outdoor space. That’s where you end up in the summer anyway. The long-term plan is to just work on the outdoor space and make it a playground. We love being outside and that is where we are going to put most of the effort moving forward. 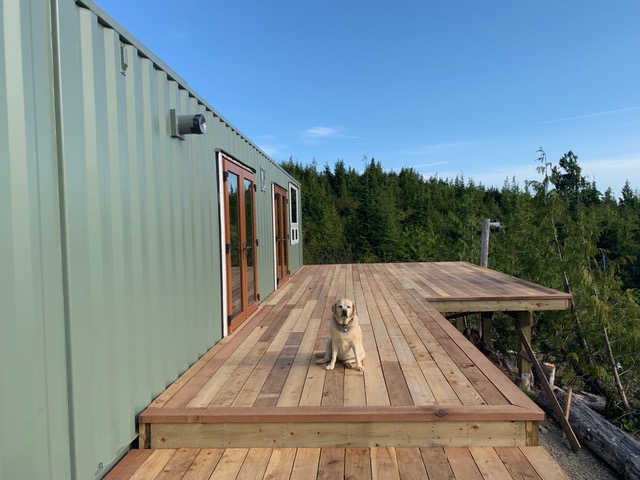 What advice do you have for the aspiring tiny home dwellers out there?

Robin: Do not take the info that you get on the internet at face value. DO more research. Stereotypical websites like Pinterest make the building seem super simple, and it’s not. Know that you will do 50 percent more than what it shows and that there will always be hiccups. Being flexible is also important, getting stuck in an idea and it not working out can be a bummer, but sometimes you just need to let things happen and adjust as you go.

Why is a minimalist style of living important to you? How does this lifestyle relate to your snowboarding career?

Robin: I think traveling so much for snowboarding has shown me how other less-developed countries live and also how little stuff and things you actually need. What's in your suitcase is going to do the trick for the most part. I just don’t want to have a lot of stuff, clutter and excess belongings gives me stress and I don’t want it. I would rather have less and do more, that's the good life to me. 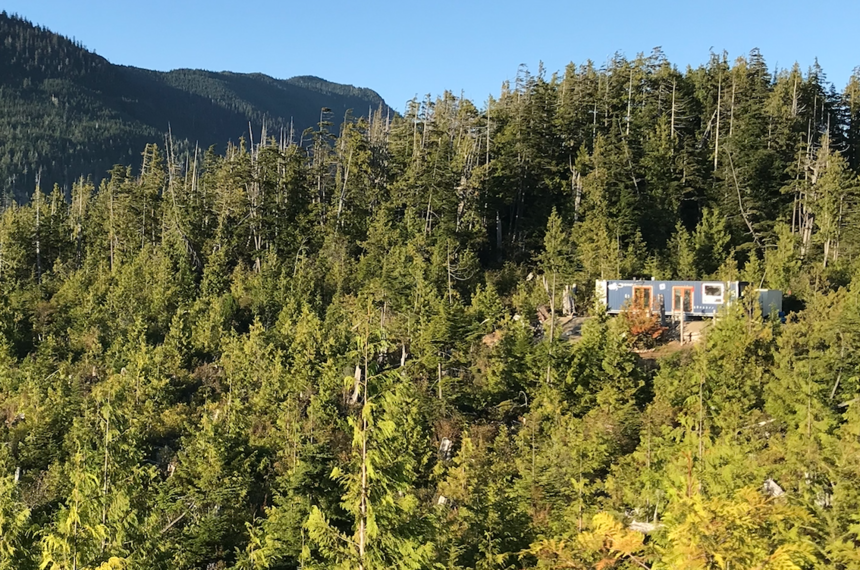 Not a bad place to have a basecamp. Robin Van Gyn Photo.

Why is Vancouver Island home for you?

Robin: It’s always been my home. I grew up here and having traveled the world I can honestly say it’s one of the best places to live. There is something for everyone and it’s incredibly beautiful, lush, and diverse.

What do you love about having a basecamp there?

Robin: It’s remote and slower living so for a few months of the year I can reconnect in the wilderness and take a breath between trips and focus hard on snowboarding. Projectsdeal is a Professional Dissertation Proofreading Service From UK

Just when we thought these two couldn’t get any cooler!  Would love to see a video piece on their project someday!  :)

Very cool, forget a traditional home, I need an agent who can put me in something like this!