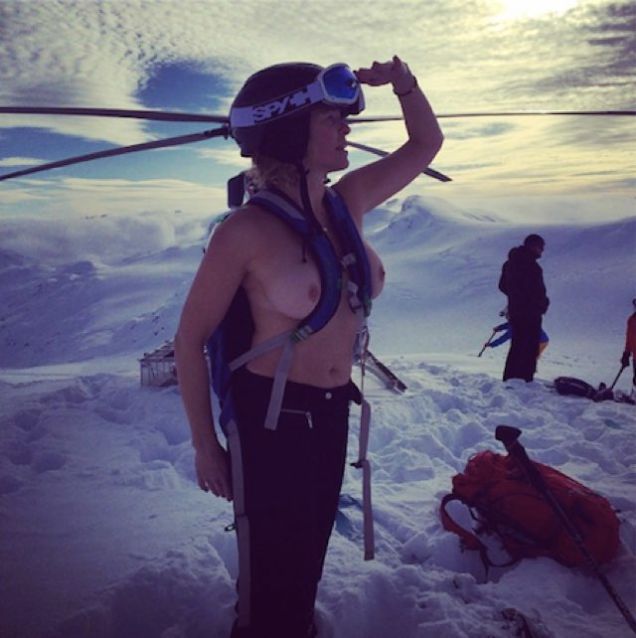 Welcome to Tetongravity.com, your breaking news source for all celebrity-related snowsports nudity. In our newest pageview cranker, passing comedian and headstrong thirty-something former girlfriend of 50 Cent–one Chelsea Handler–continued her celebrity salvo against Instagram's no-nudity policy by posting a picture of herself heliboarding topless on her Christmas vacation. To the delight of boys, men, and supporters everywhere, the photo of Chelsea's 34Cs was left up mercifully for one half hour before Instagram's social mores gestapo deleted it, although in the interest of social amplification, most all of them were also reposted on her Twitter account, which is beholden to no such standards.

Handler has long opposed what she considers Instagram's double standards for male vs. female toplessness on the photo-based social media platform, while the company has defended its right to set its own decency standards. For whatever it's worth, the snowsports community can at least respect that Handler appeared to have managed a run or two in the backcountry topless without catching a frontside edge and chest-planting into the snow.

Handler herself seems bent on completing the traditional TGR skier or snowboarder's bucket list, which in addition to heli skiing includes  breaking yourself off and getting wasted in Aspen. It’s always T&A or motorsports, but Dunfee sure can crank out the hits.

For sure Olaus—for sure. It’s almost cheating…

Hey, to be fair, I spend a lot of time helping others do the cool, harder pieces, so all I’m left with is the T&A ;)

It’s a good thing to be left with; don’t hate the playa, hate the game. where’s the jiggle?  I clicked for some jiggle! Woohoo!! Nice to see another woman embracing the Mtns and getting the full experience haha!