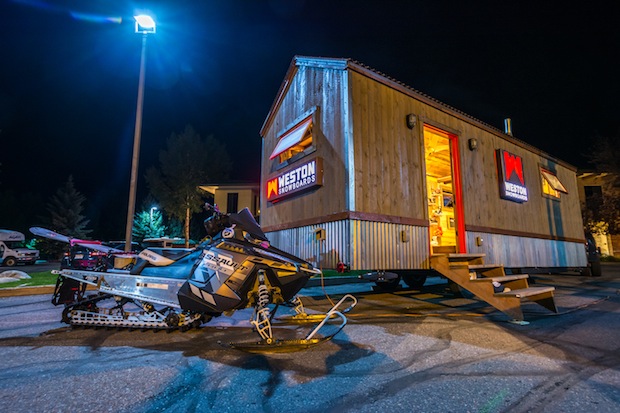 Can you remember a time when you reached your ultimate zen? For Weston Snowboards co-owner Mason Davey, that moment happened six years ago, when he moved off-grid to live in a van next to the Colorado River.

The joy that Davey garnered from such a minimalist lifestyle recently came full circle with the brand’s newest debut: Weston's tiny 'home,' the first-ever snowboard retail shop on wheels.

The central reason for downsizing their retail space was to allow Davey and co-owner Leo Tsuo an ability to focus their energy and resources on what matters most: designing snowboards, cultivating a strong snowboard community, and educating folks on backcountry equipment and safety. A limited floor space requires streamlined racks—so, there’s simply no need to buy and sell a bunch of apparel, for instance. And the tiny shop’s inherent mobility equates to on-the-ground, real-life networking while living the dream: riding as much as possible.

“We’re most excited about the connections with family and friends. I want to emulate the people who surround me. We want to grow that family and have a sustainable business—life is too short to not do what you’re passionate about, and having the tiny home allows us to live what we love,” said Davey.

On the weekends, Big Tiny—as the shop has been endearingly dubbed—will roam around Colorado as a product show room and education center. They’ll host backcountry gear and splitboard demos at resorts and events such as Adventure Fest, as well as avalanche awareness courses with partners like REI at the Denver flagship store. 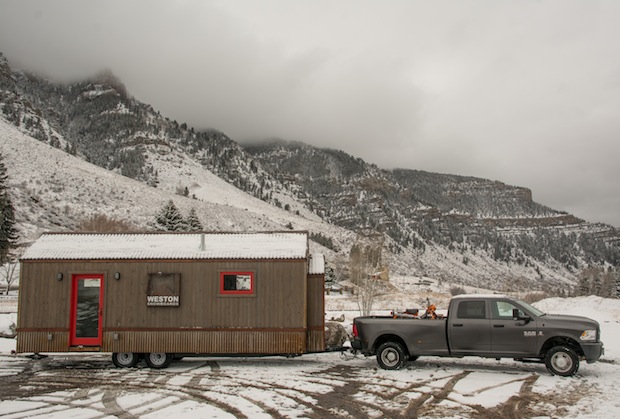 Surprisingly spacious, the shop features an airy A-frame ceiling, two lofts, rustic metal accents, and a cute wood-burning stove. Big Tiny captures the ambiance of a cabin in the woods plus a taste of Weston’s original brick and mortar in Minturn, Colorado, which influenced Davey’s design.

Davey’s love for building stems back to days of youth when he and his friends would dig through construction site dumpsters for scrap wood to create masterful tree forts, club houses and go-karts. He doesn’t have a formal education in woodworking—so he commissioned a few experts to help with the frame construction and smithwork—but Davey envisioned the tiny shop’s personalized layout down to each meticulous detail and hand-built many aspects of the interior.

To parallel those dumpster diving days, close to 100-percent of the materials used to construct Big Tiny are salvaged and sustainably sourced.

In line with the brand’s beginning and commitment to sustainability—when they initially constructed their base designs out of beetle kill pine—they built Big Tiny nearly entirely out of ghost-stained and raw, blue dead wood. To showcase their roots, they made a fold-down workbench from their original Weston beetle-kill board. Recycled blue jeans were used for the insulation. 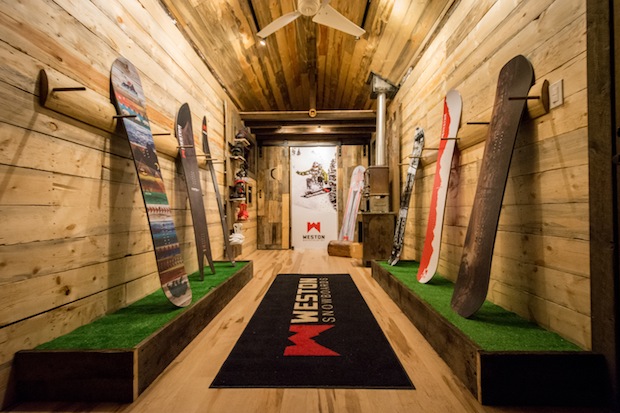 The sole exception to incorporating the beetle-kill pine is the 200-square-foot floor and the 100 square feet of loft space, which Davey built from maple scraps that he picked up at the Minturn lumberyard: an exchange that was made for a pair of Weston skis.

Inside, the attention to detail is next-level, purposeful and contemporary without feeling the slightest bit superfluous.

A sliding barn door engraved with a crescent moon encloses the front storage closet and composting toilet. The lighting is self-powered via four Goal Zero 90-Watt solar panels. Streamlined snowboard racks line the walls, made with an elevated step covered in faux grass and rods to separate the stacks.

The windows oppose each other for cross-ventilation and crank open-and-up to bar the snow out during blizzards. A patina Hobbit stove—initially an obtrusive black—was sandblasted for its rustic appearance. And Davey emblazoned a crispy ‘W’ with the Weston branding iron on a handful of wood panels and two tree stump rings, which hang on the edge of the lofts.

The Backstory to Davey’s Van Life 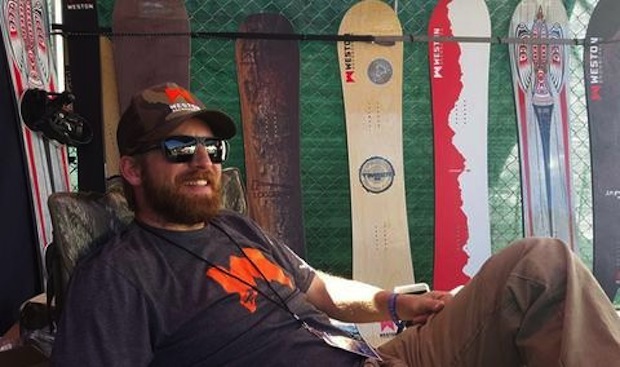 As with most revelations, Davey’s pivotal breakthrough by the river happened after he’d hit rock bottom.

Raised near the Boundary Waters in Eden Prairie, Minnesota, Davey moved out West in pursuit of mountain life at 26 years old. With a friend’s sofa waiting, he packed a bag of clothes, $250, and his snowboard: the necessities. He was determined to make it work. Davey’s dream to return to the Rocky Mountains had been planted in the back of his mind for 13 years, since he’d first gotten a taste of Colorado and his debut on a snowboard at Vail Ski Resort.

Davey landed a job at an eye care center in Vail, which eventually led to a position up the road in Mile High City. He was an optician and managed an optical shop in Denver. In every sense, he’d achieved success, but soon realized that the typical American Dream—upward growth that often includes a high paying job, spiffy car, and big house—was not substantial for his own happiness. He’d reached an all-time low and made the decision to “check out,” by reconnecting with nature and simplifying his life, so he quit his job and moved into a van by the river.

“So much of society says that you need things, but the happiest that I have been in life was when I owned the least amount of stuff,” said Davey and explained that trimming his belongings down also helped him to eliminate the financial stress connected to maintaining and paying off big-ticket items.

“I was able to reconnect with my hopes, dreams and goals, which I had strayed from, by doing what everyone else thought I should do—getting a house, a 9-to-5 job, an expensive car. I had an awakening that this is not where I want my life to be or what I want to be doing. I got out of the industry I was in. I had to look within and find what truly made me happy,” said Davey. He decided to go back to school, which he paid for by selling thrift store finds on eBay; he'd bring in $1500-$2000 a month.

What’s in Store for Big Tiny 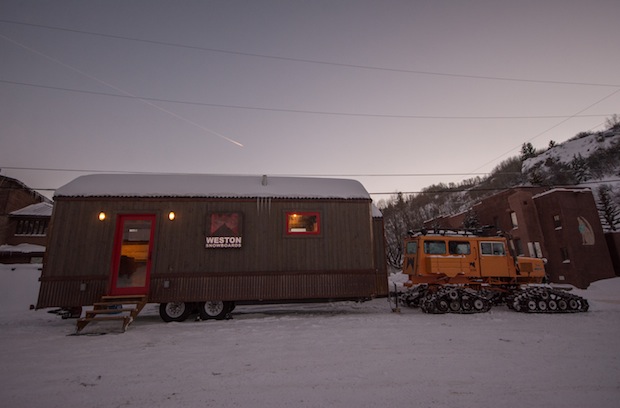 Up ahead, Weston may build a second smaller tiny shop that’s more agile for cross-nation road trips and has room to haul two snowmobiles.

Big Tiny is currently an ideal fit for Weston. Though, as the pilot project, the shop-on-wheels retail model may not be the best choice for the long haul. In which case, the interior was dually designed to convert into a real home.

The large loft could be lowered to accommodate the sleeping space. A kitchen would take over the retail counter corner. The front cabinet is sized to hold a water heater and the propane, and the storage closet is the best spot to be transitioned into a shower.

So, who would live in Big Tiny—Davey or Tsuo? Hands down, Davey. And with no real competition. Making a tiny house ‘home’ would feel a bit too crammed for Tsuo, which is also why Davey recommends that if you’re getting serious about the investment of a tiny home, stay in one for a night. Test the water.

Most days this winter, you can find the tiny shop posted up next to the historic Minturn Saloon, adjacent to the base of Minturn’s famous sidecountry run, the Minturn Mile. Legend has it that 10th Mountain Division soldier and Vail Ski Resort founder Peter Seibert stumbled upon the back bowls of Vail while skinning up said route. It’s the perfect spot for Davey’s shop—given that Vail is the seed that began his venture out West in the first place.

A climber was rescued out of a crevasse on the Teton Glacier on August 7. Wikipedia photo. One thing many of us probably didn’t know was that Grand Teton National Park still has glaciers large enough to form crevasses. While they are far away from the most popular summer climbing and hiking routes, they still pose a threat as evidenced by the fact that a climber had to be rescued from a crevasse by park authorities on Friday, August 7 on the Teton Glacier on the north side of the Grand

The word ally is probably something you’re hearing a lot these days, but what does it actually mean to be an ally in the outdoor community? For Pattie, she’s come to realize that the term isn’t a noun or some sort of title you award yourself after one act of good work. Instead, she argues it’s a verb. Allyship means taking action every day, even when others aren't looking. While that might sound intimidating, allyship can be fun and exciting. It means having conversations with people that