A heavy crew dedicated to fun above all else. Robot Food photo.

Snowboarding’s rapid progression was and is unrivaled in winter sports. In just 15 years the small fringe activity that started as a countercultural youth rebellion against the skiing establishment, grew into something monstrous and quickly became synonymous with corporate sponsors and televised contests like X-Games and the Olympics.

Progression quickly became the name of the game: Bigger, faster, longer–everything was quickly becoming extreme. Snowboarders were pushing the limits in every facet of the sport, from the Forum 8 pushing what was possible in the streets to a young Jackson Hole, Wyoming, local named Travis Rice doing 110-foot rodeos at Superpark, everything seemed to be moving along at warp speed.

Every fall a new crop of videos would be released to snowboard fans around the world, directly transmitting the most progressive maneuvers onto television screens around the globe. Names like Mack Dawg, Standard, Kingpin, and Absinthe set the stage for bigger and better, every year capturing the most progressive snowboarding in the world and packaging it into roughly 60 minutes of high flying action.

That all changed in 2002 when a silver robot walked across our collective screens, steadily bopping along to the Talking Heads’ “Once In A Lifetime” forever shifting the dynamic in snowboard video production. Robot Food, started by filmmakers Pierre Wikberg, Jess Gibson and a crew of both established and up-and-coming international talent signaled a paradigm shift, a shift away from the seriousness of modern day snowboarding, reminding us of why we all started snowboarding in the first place.

“We started Robot Food after J.P. Solberg and I met Travis Parker, Bobby Meeks, and Jussi Oksanen in Hemsedal, Norway in 2001,” explains Robot Food co-founder Pierre Wikberg. “They weren't happy with how things were going at Standard, so after we finished our projects for that season we started working on making Robot Food a reality." 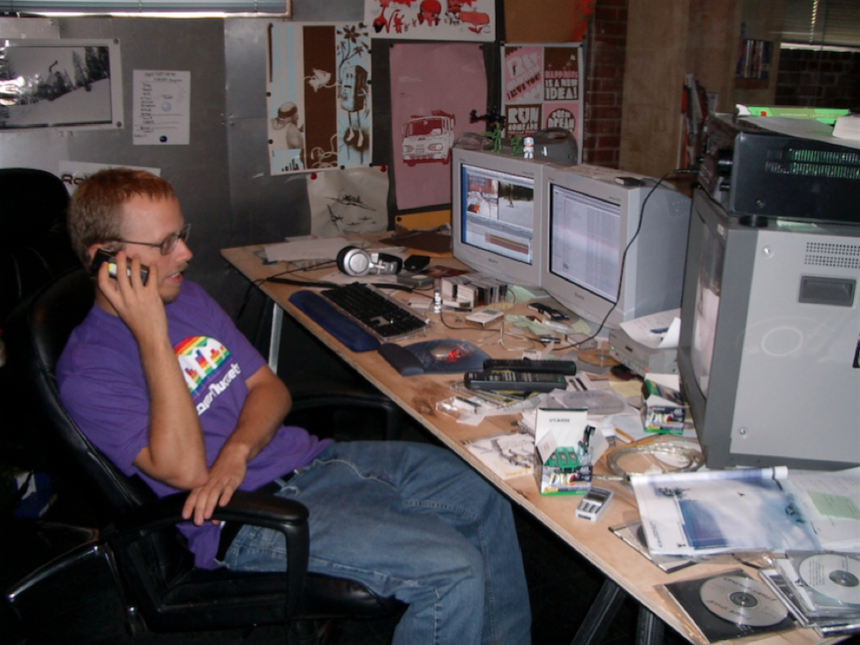 Wikberg getting creative in the editing bay. Robot Food photo.

The first video of the what has now become known as the Robot Food Trilogy was 2002’s Afterbang. While both the filmmakers and the riders had worked on various projects with a number of the era’s top snowboard production companies, no one knew quite what to expect. Snowboard fans had gotten a bit of foreshadowing with the release of Absinthe Films Transcendence, in which a then up-and-coming J.P. Solberg throws down some of the smoothest tech tricks on the planet while dressed in a large bunny costume, no one knew for sure what the new production crew would produce.

“At this time all videos were focused on how gnarly of tricks you could get. When you watched a video you were almost scared for the riders,” enthuses iconic snowboarder Eddie Wall. “Robot Food turned everything around. When you watched it, it just made you want to go snowboarding with your friends.”

While Afterbang certainly portrayed the comradery and fun that is associated with snowboarding, the riding was still progressive. Louie Fountain’s opener was a testament to the level of talent on display and made it clear from the jump that Robot Food was going to be a mix of progression and fun.

“Our intent was to separate ourselves from the status quo and we were in the perfect position to do so,” states Robot Food star and co-founder Travis Parker. “We intended to uphold our talent and we intended to try to not take ourselves too serious.”

“I liked to document riding that was relatable. Travis and Jussi could do 900s into powder, but I was more excited to shoot them playing around on groomers, riding the public snowboard park, or jibbing a trash can lid in the backyard.”

Afterbang ushered in a new aesthetic into snowboard cinematography, the influence of which is still felt to this day–particularly in Travis Parker’s part–which shifted the paradigm of the full part. While Parker’s part was progressive it was more innovative than death-defying. It hinged heavily on creativity, including Parker’s fast plant-to-one-foot-boardslide.

“I feel like Travis’s part in Afterbang was some of my best work.” Wikberg tells TGR. “His riding, his hype at the time, his originality and his song choice was a challenge I really enjoyed taking on.”

Following the success of Afterbang, the Robot Food crew started production on their second film, 2003’s Lame. Lame followed a formula similar to Afterbang and featured a mix of fun and creative riding and progressive technical freestyle riding. "There were also some changes to the original roster, including the addition of everyone's favorite non-conformist Scotty Wittlake."Lame was a testament to the Robot Food brand, continuing along in the tradition of fun.

Lame, while being similar in style and tone as Afterbang seemed to solidify Robot Food as a production crew, a juxtaposition to the helicopters and private park shoots of competing films. Both Afterbang and Lame appealed to a large audience, simply for the fact that both films featured tricks and terrain that was relatable. After all, not everyone can afford to ride helicopter-accessed spines in Alaska, but everyone can enjoy slushy park laps with their friends. Robot Food had found a path to long term success, and could have easily gone back to their tried and true formula, riding their new found success for the foreseeable future.

However, the crew at Robot Food decided to go down another path and in 2004 released the highly anticipated Afterlame. The flick, and its iconic opener set to Norman Greenbaum’s song “Spirit In The Sky,” helped put an endcap on a generation of iconic professional snowboarders whose influence had been instrumental in shaping snowboarding’s previous decade. Afterlame’s documentary style once again disrupted the formula of traditional snowboard media, offering a rare glimpse into the mindset of the eras top pros.

“Well Afterlame was different than Afterbang and Lame.” States Wikberg. “I was fed up with the formula of video parts and Jess was on the same page. Afterbang and Lame are pretty similar. I had no idea how Afterlame would work. Nor did I really care. I just didn’t want to make another movie that was similar to the first two.”

Afterlame would be the final movie in what is now recognized as the Robot Food trilogy. A fitting tribute to an era of snowboarding that was coming to an end. While no one knew it at the time a soon to hit recession and the rapid technological advancement brought on by the internet would forever change the way we viewed snowboard media.

Robot Food was the final chapter in a historic story that saw a small fringe winter activity blossom into a worldwide phenomenon, a bygone time in which the snowboard video was truly cherished. While the crew at Robot Food never set out to redefine snowboarding videos or to be the voice of a generation there is no doubt that the Robot Food films have come to be considered some of the greatest achievements in snowboard filmmaking history. A legacy that continues to evolve and grow to this day.

“I keep hearing we brought the fun back into snowboarding,” States Wikberg. “If that was the case I feel like we succeeded.”

“Robot Food’s legacy is have fun, take care of yourself, and enjoy life. Don’t take it so seriously. Be active and do your best, it’s beautiful outside. The mountains are gorgeous and have so much opportunity for everyone who respects them. We all know lift tickets are expensive, so if you ever own an opportunity, take it and don’t look back.”

IT'S TIME It all starts now – the 22/23 Ikon Pass is on sale. It's time to keep the stoke alive, seek a season of fun in the mountains, and DO across 50 of the best ski destinations in the world. When you claim this multi-destination pass, you're dropping into a celebration of snowfall. Whether it's the immediate spring access, hooting and hollering down your favorite runs next season, or connecting with the crew for an afternoon brew, there's always an adventure for how you ride.

After a bit of a hiatus, snow has returned to Jackson! | Nic Alegre photo. If time on snow is the barometer of success for your winter, Jackson Hole has been the place to be. As TGR co-founder Todd Jones says, "Lift lines haven't been this short since the 90’s." Now that Miracle March is well underway, snow and music is on the menu for closing out the season in style. In preparation for the upcoming Rendezvous Fest spring music festival with guitar hero Ben Harper, The Wailers, Fitz and