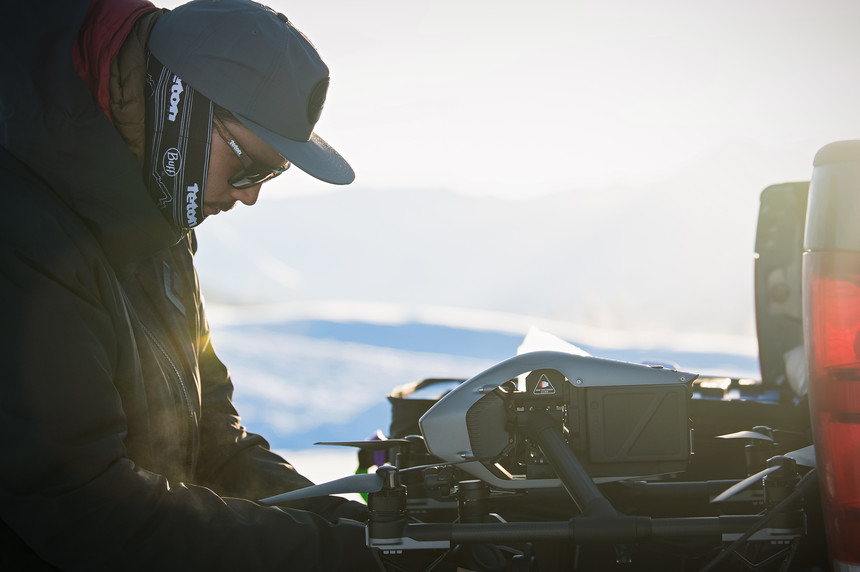 Since the days of Doug Coombs and birth of TGR, Alaska has been a proving ground for any skier or snowboarder who wants to test themselves against the world’s most dramatic and unforgiving mountains. Generations of riders have dreamed of endless spines and snow that sticks to the steepest of faces. This has manifested itself into some classic moments on film, lines that will live forever in the collective memory of the snow community.

Alaska continues to be a place of infinite possibility not only for TGR’s athletes but for the cinematographers who brave the same conditions to capture these moments. One of these characters is Austin Hopkins. Hopkins is one of TGR’s resident drone pilots and is responsible for some of the more memorable aerial visuals in films like Tight Loose and Rogue Elements. 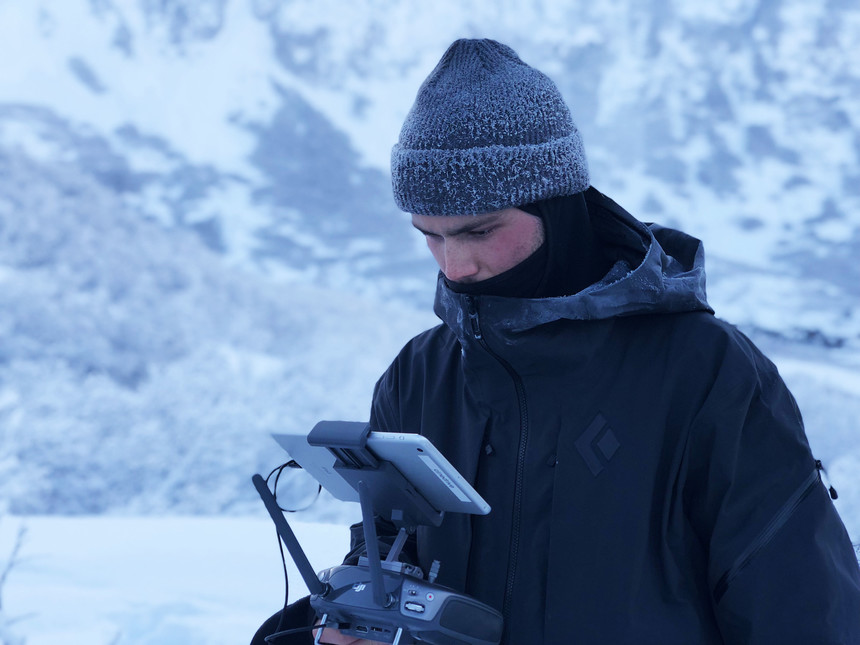 This January, Austin–along with a crew of TGR athletes–joined Angel Collinson in her new Alaskan home of Girdwood to try to accomplish a rare feat: Filming a film segment in harsh and dark winter of the 49th state.

We caught up with Austin to talk about his experience with drones, the trip, and what advice he has for the up and comers who wish to expand their own ability.

How did you get into aerial cinematography? 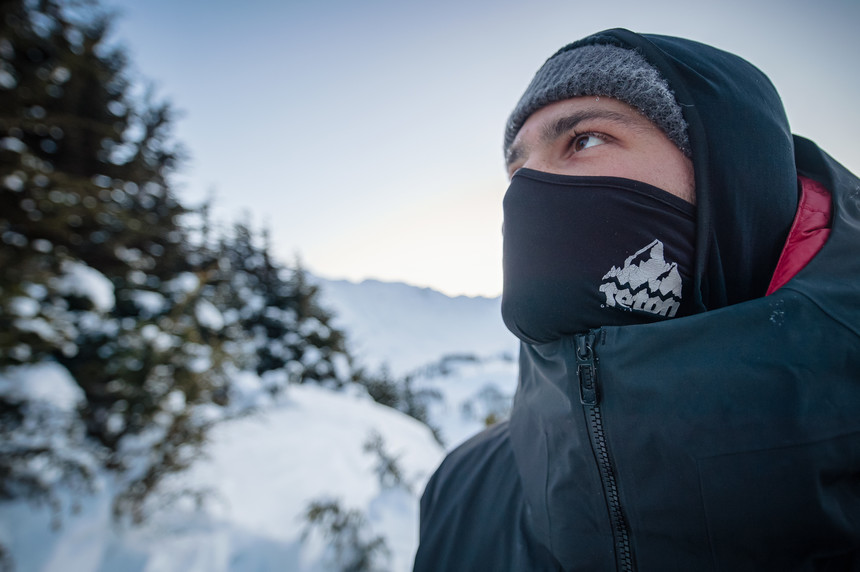 Scoping a zone in the pre-dawn light. Nic Alegre photo.

About five years ago companies like DJI really started to make affordable high-end drone equipment. TGR co-founders Todd and Steve Jones are always embracing new technology and saw that drones were about to explode. At that time the drone pilots out there were not really using them for action sports and we saw an opportunity. TGR invested in our first small fleet–specifically the DJI Phantom 3 Pro–and I learned to fly on that.

I got really amped on shooting action from drones, learning the technology and constantly improving my craft.

Tell us about your trip to Alaska this winter 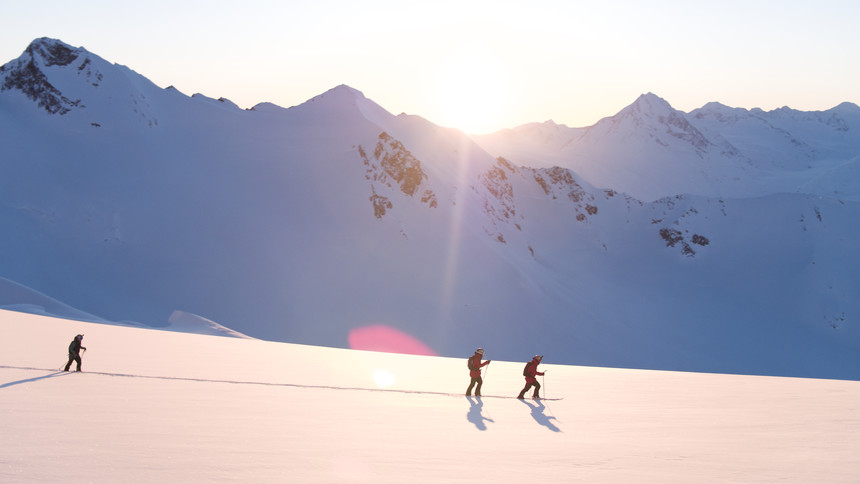 The athletes on a runout after a big day. Austin Hopkins and Amon Barker photo.

The TGR crew and I went up to Alaska this January. Not many people go up there in January to ski because there are only 5 hours of daylight and it's brutally cold. When the sun is out, however, it has the beautiful dusk light for the entirety of the day, which is perfect for filming.

We were up there with Johnny and Angel Collinson along with our resident Kiwi, Sam Smoothy, poking around the Girdwood area, bouncing between the Alyeska Ski Resort and a bunch of zones in the Chugach range.

It was super fun and productive, but the weather made it challenging for the drone. With the early starts in the morning we would be dealing with -15 degree temps. We would be skinning out in the morning in the cold and struggling to try and keep my monitors, iPads, and batteries warm enough so that they would actually turn. I had to keep all my gear stuffed in my bibs so my body would keep it warm. It was definitely a challenge but once you got used to it and adapted that routine the pieces began to come together.

This was one of your first experience with dual-operating a drone, what was that like? 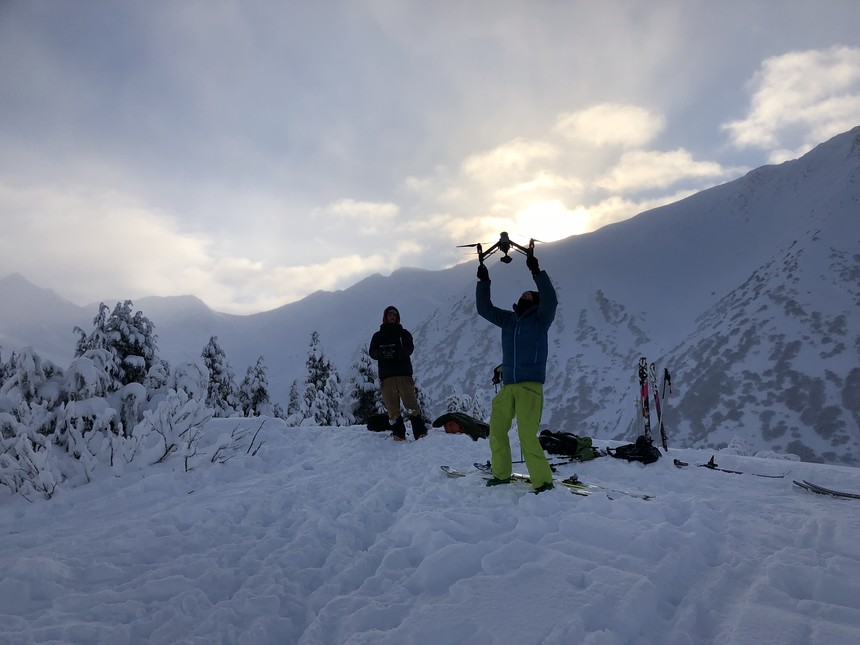 As the sun sets over the ridgeline, Amon Barker grabs the drone, milking all of the daylight. Jonathan Desabris photo.

It was awesome to have Amon Barker as a dual-operator.

Amon was the main pilot and I was the camera operator and DP. With the DJI Inspire 2, you can set up multiple controllers and pilot with another person. This allows you to really focus on the camera and if you are the pilot you can just focus on the tech of the aircraft. That was really nice because I have never really flown dual before. It really allows you to focus on one aspect of the capture so it was awesome to break that into two responsibilities. Amon killed it and is a really talented pilot.

What do you think about when you are setting up a drone shot? 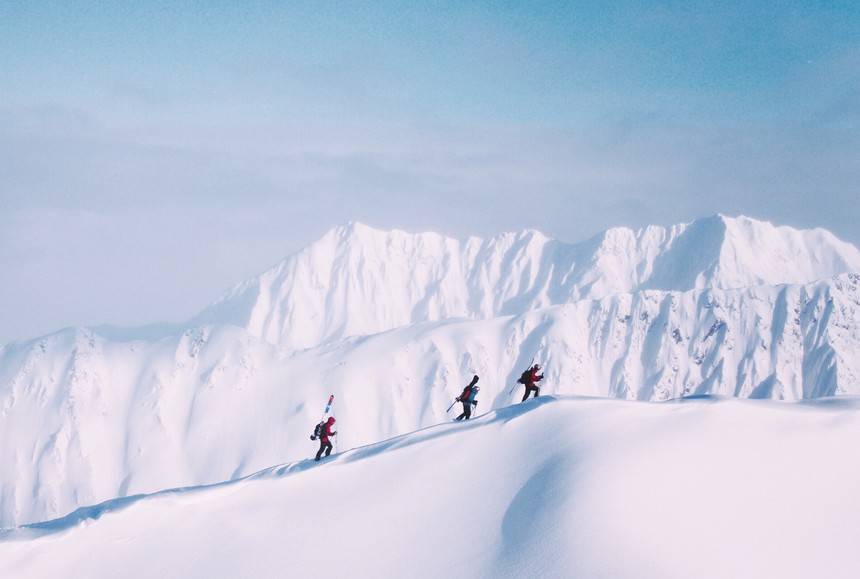 I mean, I’m really motivated to make it as sick as possible and I try not to be afraid to take chances. You’re still shooting moving images and video so composition is still super important. It’s cool shooting drone because as opposed to shooting on a tripod you aren't stuck to one dimension. With the drone there are so many different ways you can capture action, it allows you unlimited creativity.

It really does start with composition. One thing you should always consider is the scale of the terrain the skiers are riding and what lens you're shooting on. It’s important to understand how that lens will affect the scale of the terrain and the scale of the skier. We are always trying to capture and relay just how big these lines and mountains are. Keeping that in mind will make your shots better and it does take time to learn what works. I have been flying for over four years and learning new tricks everytime I fly.

What advice do you have for someone who wants to explore the world of aerial cinematography? 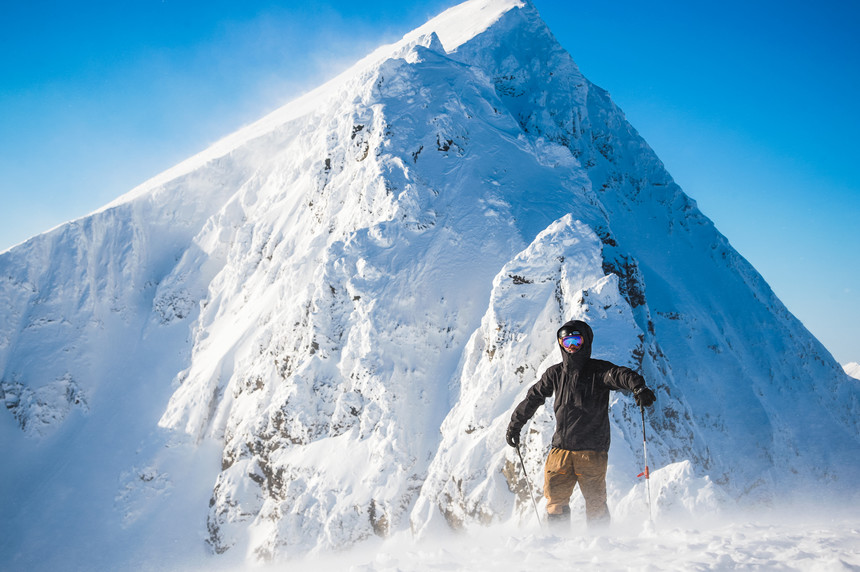 I think for someone wanting to get into it, just make sure you are doing it legally by getting the proper FAA license. I would not try to break the bank right away with a big expensive drone. The smaller consumer drones like the DJI Mavic and the Phantom are all really solid options for someone just starting out. They are less expensive than they “prosumer” drones like the DJI Inspire 2 and other platform drones out there.

More importantly, go out with your friends in a safe environment, fly in legal airspaces and just having fun with it.

View All
Sign in to comment
tags: tgr news |rei |girdwood |far out |drones |behind the lens |alaska