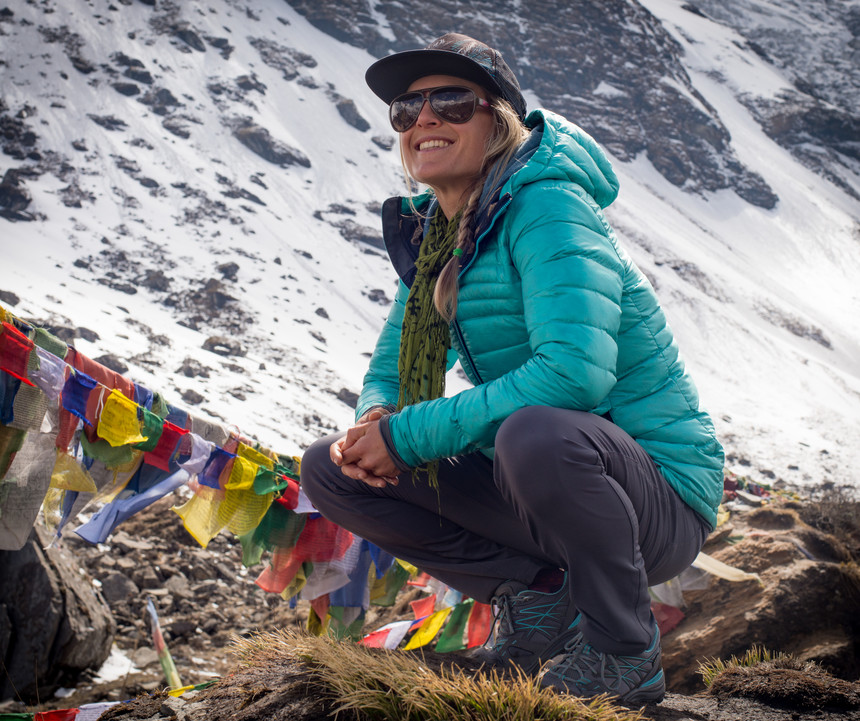 Boyd is all smiles when she's in the Himalayas. Now she's hoping to bring attention to the women of the area. Photo: Courtesy of Kelly Collado

The sun was rising over Annapurna base camp and ten inches of snow had fallen overnight, covering the majestic peaks of Machapuchhre, Hiunchuli, Annapurna and Annapurna South that surround the basin. Halina Boyd was just waking up when she heard the faint rumble of avalanches in the distance. She stepped outside and listened to the marvel that was taking place around her. These mountains were unlike anything the professional snowboarder had ever experienced in North America–huge, powerful and spiritually charged.

When Halina was 10 years old, she read Into Thin Air and Surfing the Himalayas, books that planted the seed of her desire to visit and explore the mysterious and immense Himalayan mountain range. Snowboarding in Nepal and inspiring people while doing so eventually became a lifelong dream for the 32-year-old athlete, and she was finally seeing this dream come true.

It is a rare sight to see female mountain guides in the Himalaya, but Halina was led five days and 50 miles to Annapurna basecamp by the all-female guiding service, Three Sisters Organization. Three Sisters Guiding Company offers Nepalese women education, training, English classes, leadership skills and ultimately independence in a country that is still incredibly divided when it comes to gender equality. The goal of Three Sisters is to encourage their fellow Nepali sisters to become self-supportive, independent women.

Once they arrived at base camp, Halina spent three days scouting for snowboard terrain, hiking up ridges and scoping out couloirs. Although she didn’t have her snowboard with her on this trip, she is returning in March accompanied by Three Sisters guides to snowboard these lines and make a film.

Backtrack three years ago; while Halina was talking about her dreams with friend and film director, Noah Waldron, the idea of a film project came to life – Bato. Bato–the Nepalese word for “women’s path”–is a story exploring the women’s empowerment movement of Nepal, in its first generation of professional female mountain guides. The film will explore how the Himalaya have shaped the people of Nepal and how cultural shifts are changing the face of the country.

Bato will tell the Three Sisters Organization’s story as they guide Halina into Annapurna Sanctuary and LangTang Valley to snowboard with the intention of empowering and inspiring the women of the world.

“Women’s empowerment is human empowerment,” said Halina. “It creates a ripple effect–starting with one woman, it is passed along to her children, her family and her community. It’s a contagious effect and I hope Bato helps creates those ripples.”

Three Sisters is a local NGO run by the Chhetri sisters, Lucky, Nicky and Dicky. These young women are passionate campaigners as well as hard-nosed businesswomen. A decade after the women founded the company, the Nepalese trio has trained more than 700 women to become mountain guides and porters, liberating many from the clutches of poverty and the patriarchal culture that has historically valued its boys more than its girls. 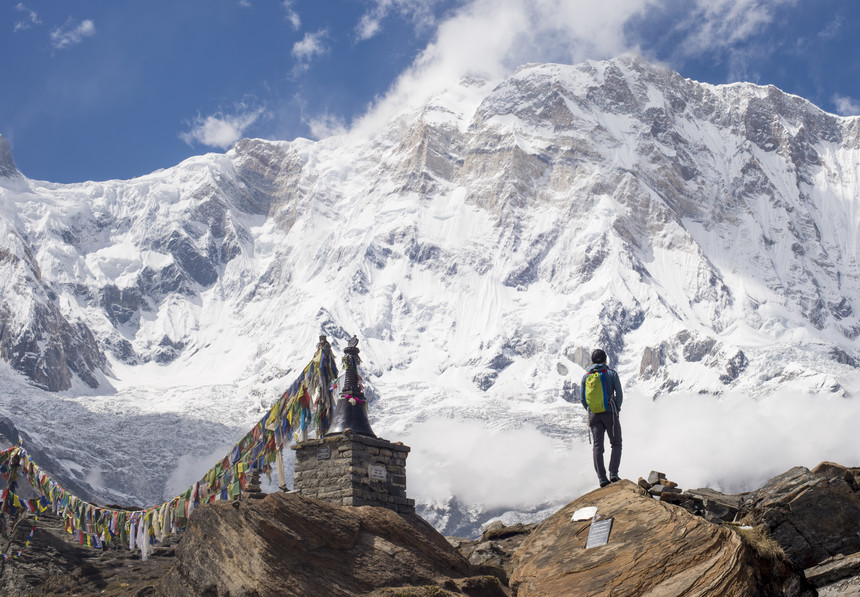 Boyd hopes to show how mountain guiding can be a way for Nepalese women to overcome the massive socioeconomic disadvantages they face in Nepalese culture. Photo: Courtesy of Kelly Collado

Girls and women in Nepal, and especially those living in rural areas, continue to face discrimination and violence due to the patriarchy and their lack of knowledge and skills, psychological support, and economic opportunities. Women are treated poorly in every aspect of their society, whether it is social, political or economic.

In Nepal, between 5,000 and 12,000 girls and women are trafficked every year, 75 percent of them are under the age of 18 and the majority sold into forced prostitution. In rural mountain areas, as few as 8 percent of women can read, compared to 41 percent of men. Even in urban areas, the gender gap in literacy is a glaring 55 percent for women and 80 percent percent for men.

Despite a century-rich history of Nepalese working as mountain guides, ever since mountaineers began exploring the Himalayas in 1900, women guides are a rare sight. Secrets and skills of the trade are usually handed down from fathers to sons or between brothers. The men normally start their journey from a porter, climbing up the ladder to become kitchen boys, cooks, sardars (leaders), trekking guides and then mountain guides. This career climb from a porter to a mountain guide can take up to 30 years or more.

One reason it is extremely difficult for women in Nepal to devote years to the mountains is because they lack a support system. It takes years of experience to become a certified mountain guide and women need as much support as they can get from their families, friends and colleagues. Nepalese women rarely get that in a society with barriers that immediately strike down their aspirations.

The Chhetri sisters’ father gave them the freedom to choose what do with their lives and he taught them to care for the poor. They wanted to do something to help the women of their country suffering from gross inequality and carrying the weight of the caste system. They love the mountains, and that is why they decided to train their Nepalese sisters to become guides. 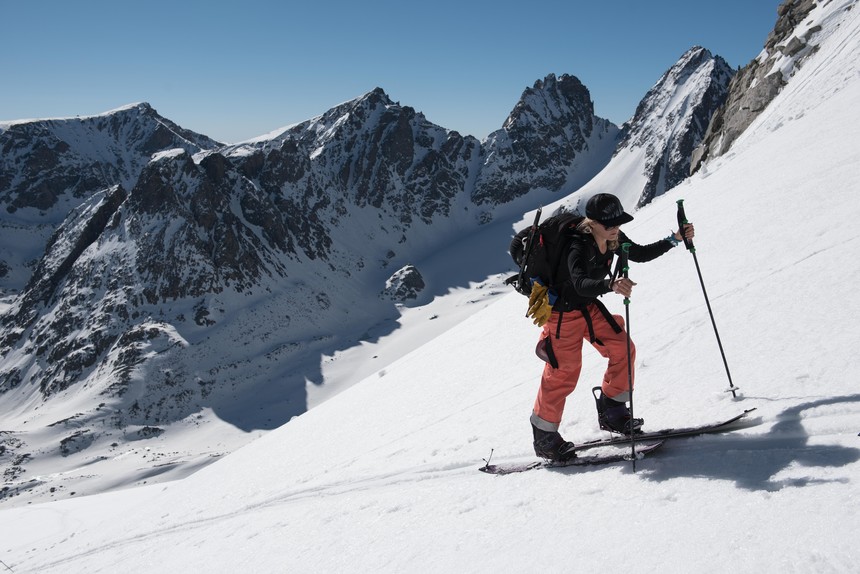 Starting in March, Boyd will begin filming 'Bato' with the hope of premiering it in Nepal. Photo: Courtesy of Chris Figenshau

Despite significant efforts from the Government of Nepal, international agencies, non-governmental organizations and civil society organizations, Nepali girls and women continue to face major socio-economic discrimination. It was not until 2007 that women under the age of 35 could apply for passports without their father or husband’s permission.

In March and April of 2018 Halina will go back to Nepal to film Bato.

“I hope Bato will inspire the women of the world to pursue their dreams and help them realize that anything is possible,” said Boyd. “With dedication and drive, dreams can come true and we hope Bato will be an inspiration to many by sharing the Three Sister’s story.”

Boyd hopes to premiere Bato in the Nepalese capital of Kathmandu.

“This is film for the people of Nepal, to show them what incredible work they are doing and how inspired we are by them,” Boyd said.

We are Like Waves by Jordyn Romero: A Film to…

SKI LIKE A GIRL: A COMMUNITY BASED BRAND WITH GIRL…