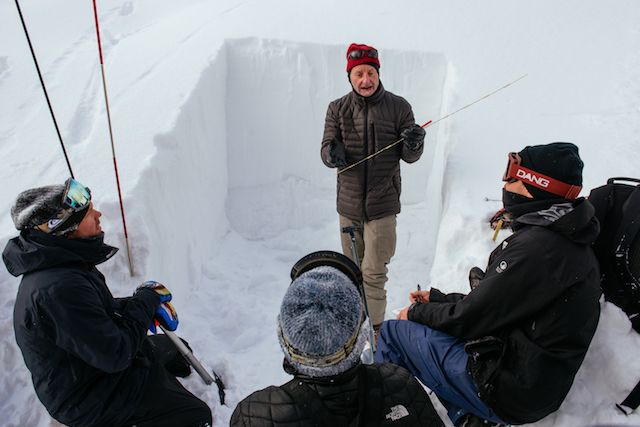 Curiosity killed the cat, but for others–like John “Buff” Buffery–it's a path to endless adventure.

Travis Rice tells me Buff's "maybe one of the few true role models I know personally. . . . He implements consciousness and kindness into all aspects of his life and it comes through in his teaching.” So who is Buff?

John Buffery is a 59-year-old Association of Canadian Mountain Guide (ACMG) certified ski guide, the Senior Avalanche Officer for the British Columbia Ministry of Transportation and Infrastructure, and a professional member of the Canadian Avalanche Association (CAA). He holds various other titles and certifications, but he's a legend to those in the know. 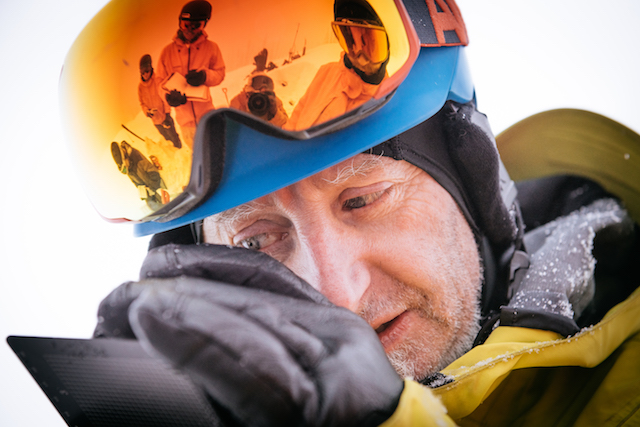 In nearly 60 years of life, the man known has Buff has become something of a guru in the art of snow study. Dustin Lalik photo.

“He has pretty deep roots in the snowboard culture in Canada, he was Craig Kelly’s private guide and to my knowledge, Buff was the first one to make his own splitboard,” Rice says.

From the start Buff was a creative and imaginative individual. He grew up in Toronto, Ontario, one of eight kids. One Christmas “for whatever reason” his mother got him some skis and boots. “I was the only one who had them, and I didn’t know anybody else who skied, so I just hiked up the local ravines and figured it out,” Buff tells me. From there he got his diploma in Forestry Technology at Thunder Bay, volunteering for his first ski patrolling gigs on weekends. 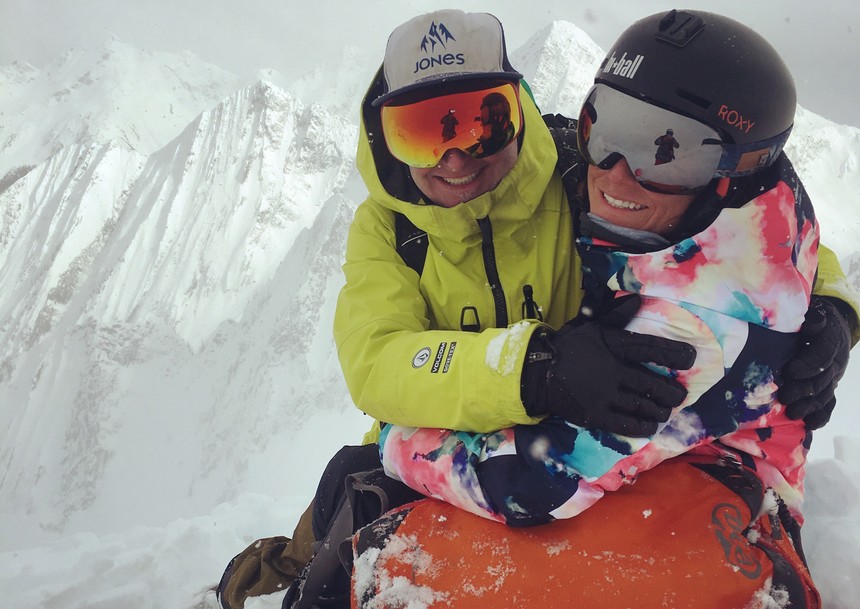 Buffery posing with none other than the legend herself, Robin Van Gyn. Travis Rice photo.

After college, Buff moved out west to Nelson, British Columbia, where he started as a timber cruiser. Forestry soon slowed down, and Buff found himself patrolling at Panorama where he sank his teeth into snow safety. “Just seeing avalanches was a phenomenon to me.” Buff says. “I took my first CAA Ops 1 in 1980. it was probably more black art than science.”

Buff got his first taste of guiding when Canadian Mountain Holidays (CMH)–the inventors of heli-skiing–would call patrollers at Panorama to fill in seats when they had extras. Buff thought the whole heli-guiding thing was "pretty cool," but patrolled at Whistler and worked with explosives for years before coming back to become a guide. His first guide gig was with CMH at the Monashees.

“I was one of three Canadians that worked at that lodge,” Buff says.

“I was the only one at the time with a level two, the only CAA professional member, and the only one with a blasting ticket, but I was also only the assistant guide,” Buff laughs. In other words, Buff worked longer hours at much lower pay. But he was also younger, so when a group of Europeans arrived with their weird new “snowboards,” Buff was given the task of guiding them. 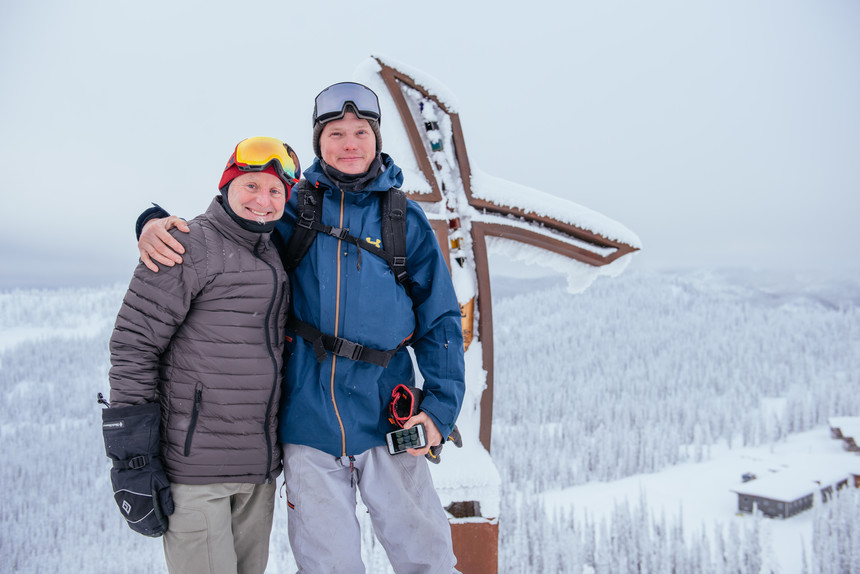 In his time, Buff has acted as a mentor to Craig Kelly, Travis Rice and the countless riders who have made the pilgrimage to Baldface. Dustin Lalik photo.

“We were in the alpine with wind slab and my skinny skis; it's hard work but on snowboards they were just loving it. At the end of that one week trip, I was like, ‘Yeah I gotta learn how to do that!’ And I learned the next year.”

From CMH, Buff went to guide at Mistaya Lodge in the Purcells, where he made his own splitboard. “I sewed skins together from telemark stuff and it worked really quite well–I did that for seven years,” says Buff.

During summers, Buff was taken under the wing of Arnor Larson, the godfather of rope work and creator of many of the standards used by the ACMG. Having these skills Buff became the go-to guy for Hollywood filmmakers shooting in B.C. who needed rigging and rope work. Working in Vancouver (North America’s third largest motion picture hub) he worked scenes needing his skills, assisting on movies like X-Men: The Last Stand and iRobot where he was Will Smith’s personal rigger–Smith affectionately called Buff “Yoda” on set.

Buff developed a strong knowledge of camera needs and direction, which–coupled with his safety skills and ski guiding experience–made him a prime candidate for safety guiding on pro riders films, where he met Craig Kelly.

“He was a little bit of a punk ass, I didn’t really appreciate him, he had a bit of an attitude, ” says Buff about meeting Kelly during the filming of Exit. “We had a little bit of a down day, and Craig asked 'Hey, can you show me a little rope work?' I showed him a lot of rope work–then he kinda took an interest in me. I was no longer a guide telling him what he could not do.”

“I told him about this splitboard and he said a 'split what?' At the end of that shoot he went back to Burton and talked to them about making a splitboard for him. The next fall he called me and asked me if I could show him how to use one, and that was the beginning of our friendship.” Kelly and Buff were close. More than just friends, they became chosen family. 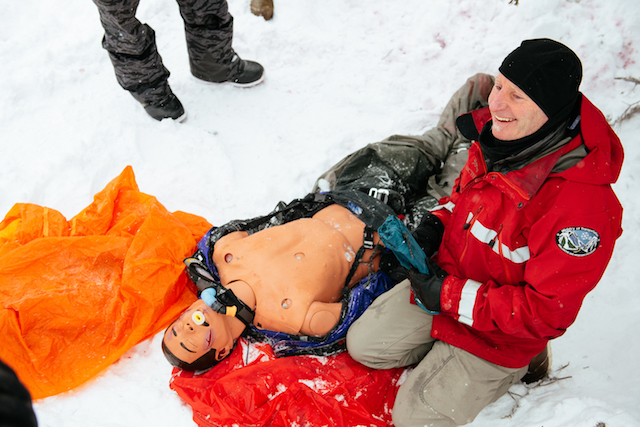 Whether guiding or teaching the basics of rescue on a plastic dummy, Buff is always upbeat. Dustin Lalik photo.

“He came to Nelson and I introduced him to his wife and that is that,” says Buff.

Buff and Kelly went on to make more films and do more projects. Along with Kumiko Inaba

they helped start The Avalanche Foundation in Japan (an amends Kelly made for ducking ropes in the Japanese backcountry), and they also helped create and curate the now famous Baldface Lodge with founder Jeff Pensiero.

Pensiero first met Buff in a coffee shop in Nelson when Pensiero was scouting for Baldface.

“I think Buff was scared I was going to just kill myself and he was going to have come search and rescue me out of a hole somewhere,” says Pensiero. “So he started coming with me. He has been a great mentor for me since I met him.”

Buff also was on board with what Pensiero had in mind –a culturally different backcountry lodge.

“I wanted the experience to be like if you met your brother’s roommate in college from Telluride during a powder cycle and he was really cool and he just took care of ya,” says Pensiero. “Not like 'Follow me or you will die.'”

This inclusive style of guiding is at Buff's core, and it's also the foundation of Baldface. Buff brought Kelly into the project to help fulfill Pensiero’s dream. Kelly also had his own dream to become a guide even though he was already the most well-known snowboarder in the world. Sadly it was during Kelly’s practicum experience at Selkirk Mountain Experience in 2003 that he was killed in an avalanche.

“It's only been about this last year that I've been okay with the situation,” says Buff. “I think about all the improvements we've made communicating since that year (2003). It was a tragic unnecessary departure but as far as lessons learned there have been many and they have been great. So I'll take that.” 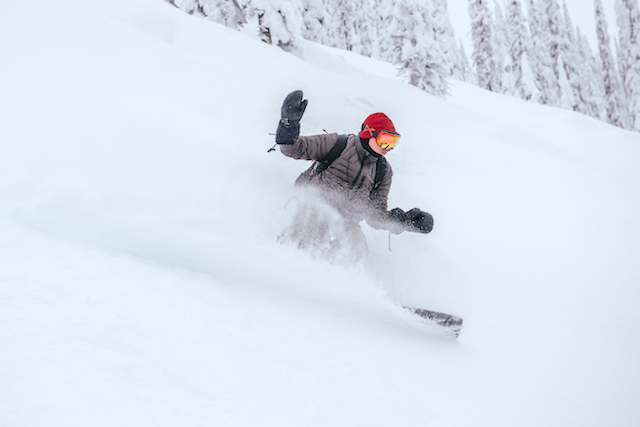 He's pushing 60, but that doesn't mean Buff can't still get down the mountain with a little style. Dustin Lalik photo.

After Kelly’s death, Buff continued to teach for the CAA, work on Hollywood films and guide, but he stopped doing safety for ski films in 2008 when he had a near miss with a group up on Mt. Waddington that, according to Buff, should have been fatal for the entire group he was with. So he distanced himself from filming, taking the job at the Ministry of Transportation and Infrastructure where he started to transition to his career as an avalanche forecaster.

But his career in film safety wasn’t over.

“Buff was recommended to me for That’s It That’s All,” says Rice. “It was a dream trip for us. Buff's a great team player–he has a truly unique talent for bringing a very calm and collected approach to a seemingly uncontrollable and chaotic situation.”

Rice is also a spokesperson for safety in the field and calls Buff before anyone else when contemplating shots for a movie, most recently working with Buff on Depth Perception.

“Buff is young at heart and young in mind, but he ain’t no spring chicken,” laughs Rice. “Watching him draw a line down the mountain on his little Gentem with his heavy guide pack is such a joy. Buff genuinely still enjoys what he does and he has an excitement for learning about moving safely in the mountains that's contagious.”

Love to read it,Waiting For More new Update and I Already Read your Recent Post its Great Thanks.
https://games.lol/puzzle/