One of my most epic backcountry ascents in the alps blessed with almost unheard of AK like conditions from last year:

Living in Switzerland, I'd been to the Eiger West Face at first 2 winters ago. I had completely underestimated the effects of altitude especially given that I lived at just 400m (1300ft). Although the summit at 3970m (13025ft) is not of a crazy high altitude at, it still requires a bit of preparation if you are living so low down, especially if you are so prone to altitude effects as I found out I am. Not only that, but it is about 1700m (5500ft) up in one go with half of it bootpacking with crampons up a steep face. Needless to say I only got to 3500m before I just could not go further. The ride down was still great though. The next year, I tried again and although I prepared better, I was still not as fit as I should have been and I just started too late in the day. Stopped at 3650m. Again a great ride down.

This year, I learned to train much better and had already done a couple of 4200m peaks in the summer, so I felt much better. Last thursday I saw it was going to dump a lot around chamonix with a lot of wind and much less around grinderwald with much less wind as well. A warm storm too meant that there was a very good chance the Eiger would be plastered with very good snow and still stay at a 2/5 avy risk. I quickly called a bunch of friends asking if anyone wanted to have a go at the eiger with me on sunday when the skiies cleared. Finally on friday evening my buddy Marc said he wanted to do it as well. Marc is an alpinist first and steep snowboarder second so it was not too hard to convince him. We decided that because it was going to get unusually warm, we should get on and off the face much earlier than one would normally do.

I headed for verbier saturday morning and rode a nice lap off the backside of mont fort with two other swiss TGR mags, which I hadn't even met yet. Being april, we were able to lay first tracks down the poubelle (trash chute) couloir after just a 5 min hike from the lift at 11am. I then made my way back to my car and headed to Grinderwald, where I took the last train of the day 1150m (3700ft) up to Klein Scheidegg at 2000m (6600ft) to meet my buddy Marc.

The Eiger W Face was looking real good. As you will find out, we had to stop just shy of the summit at the point marked with the red dot. 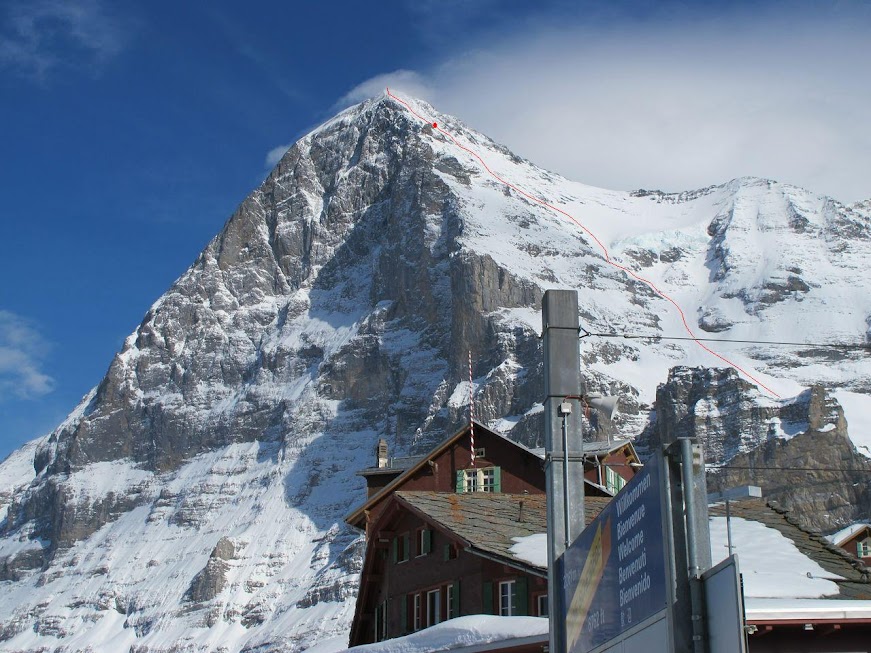 A second view with more of the line visible. The last part which we ended up having to skip was too rocky this year anyways, so no loss there: 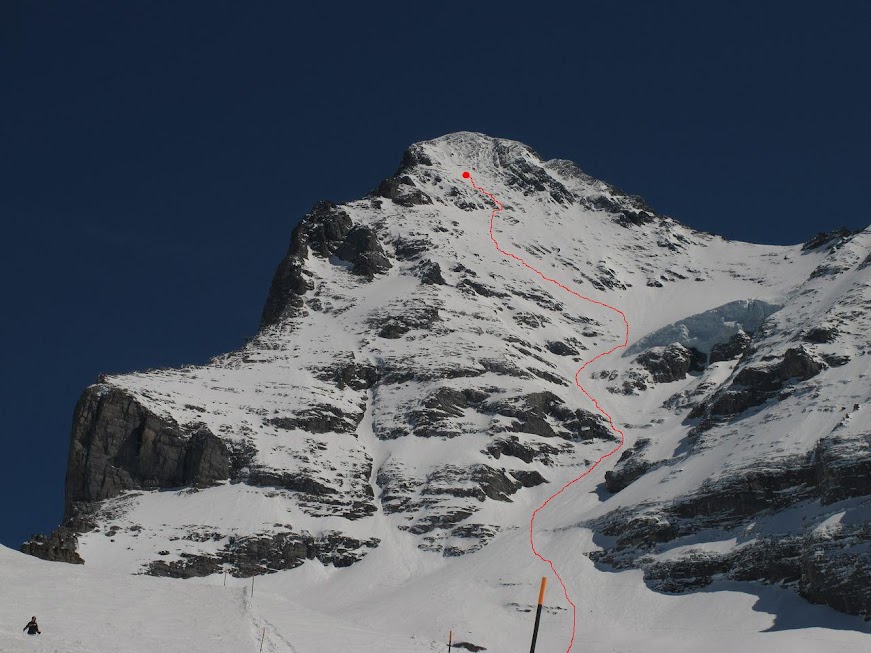 Marc was thinking that this line on the right shoulder of the west face would be cool do do as a new first descent. I thought the top would just be too sharky and too high to traverse to. He discovered the same when we go a look at it when climbing the face the next day: 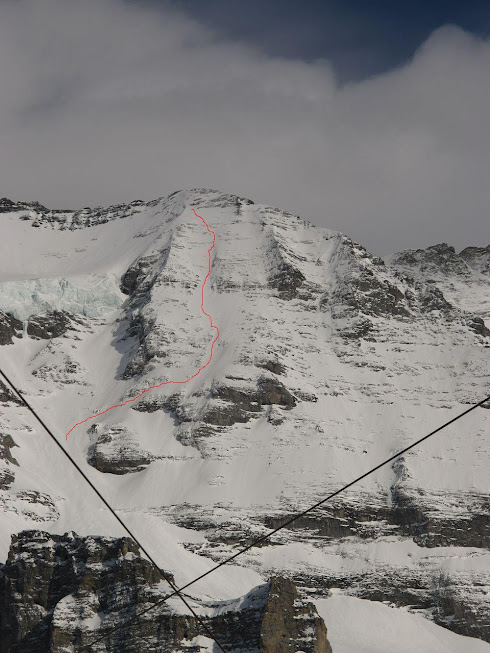 We checked into our hostel ate a good dinner and went to bed early. The hostel being at 2000m, rather than 2300m, and much further horizontally than where I had camped before to climb the face, meant that we had an extra hour to climb in the morning. 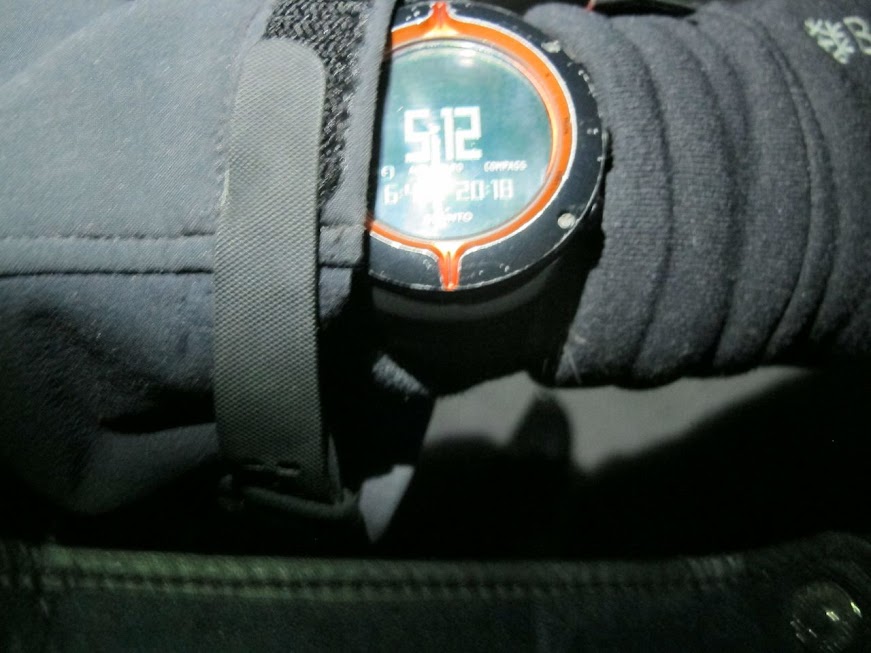 My bindings were on the wrong sides: 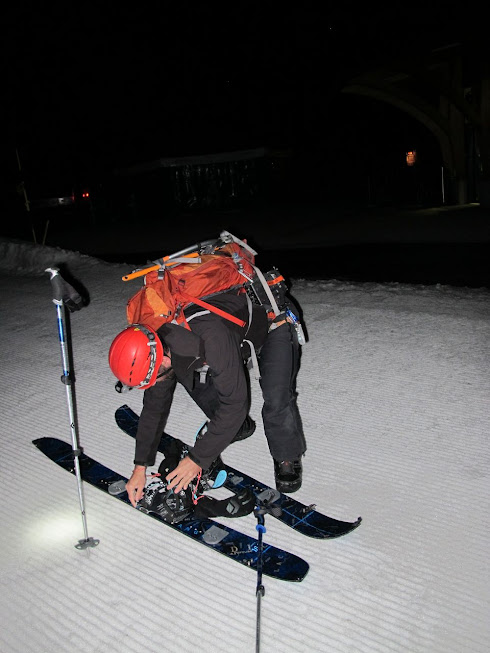 6am and we were at the start of the face: 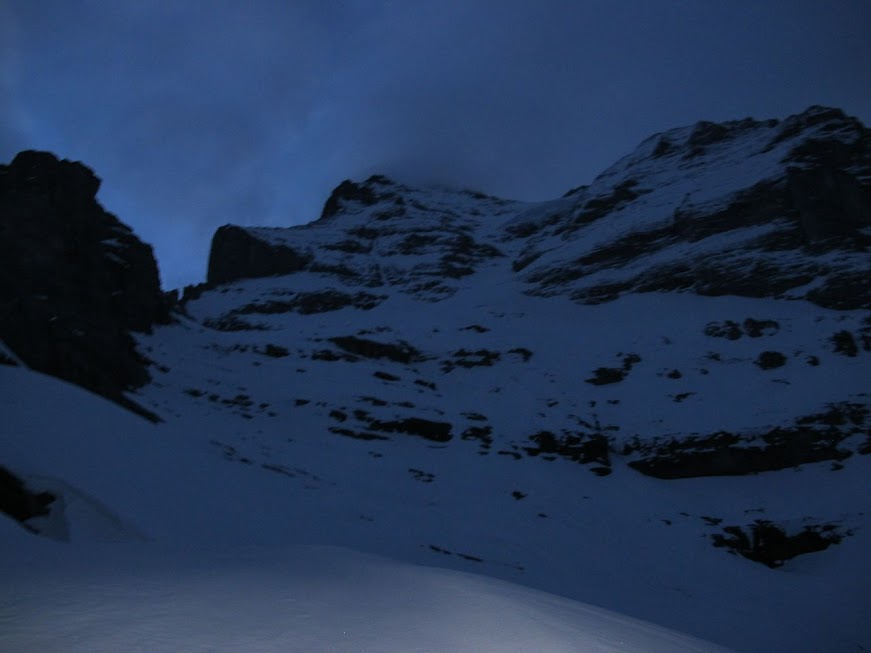 7am as the clouds parted, my guess was proven right. Deep stable pow was found: 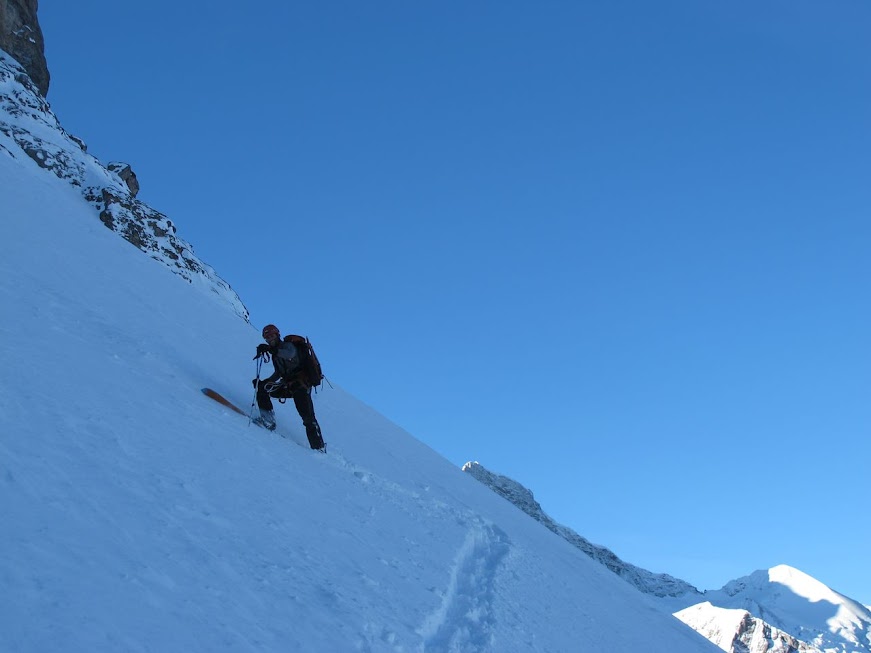 An adjacent summit the Monch at sunrise:

We reached till just below the seracs where the glacier starts, took shelter behind a rock on the left, switched to crampons, and booted up fast to get out of the fall line at 8am: 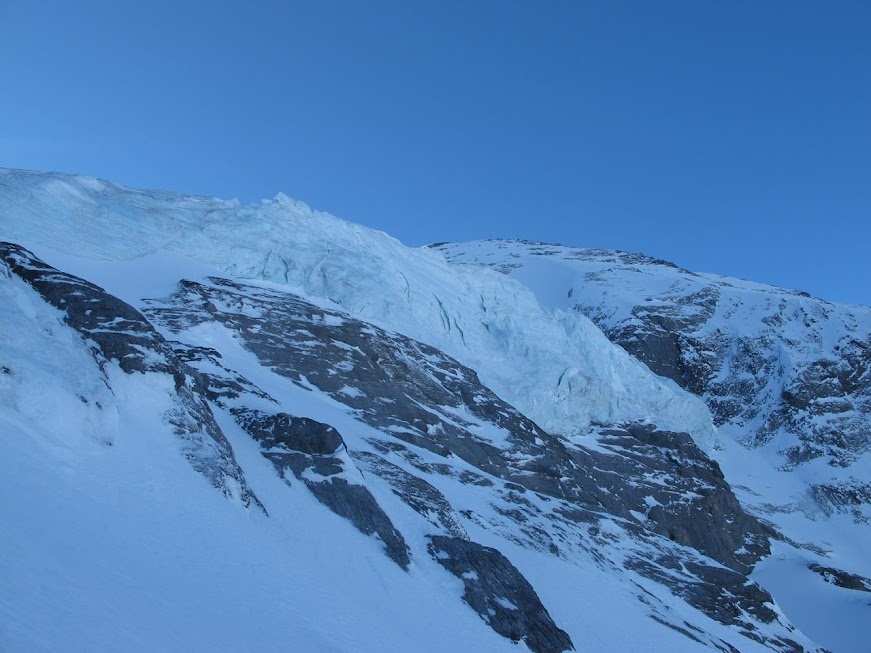 Me following on the bootpack and stoked. Apart from the last 50m we climbed, this was the least deep the snow was on our bootpack. Note, we had started 3 hours ago somewhere far down on the top right corner out of this frame: 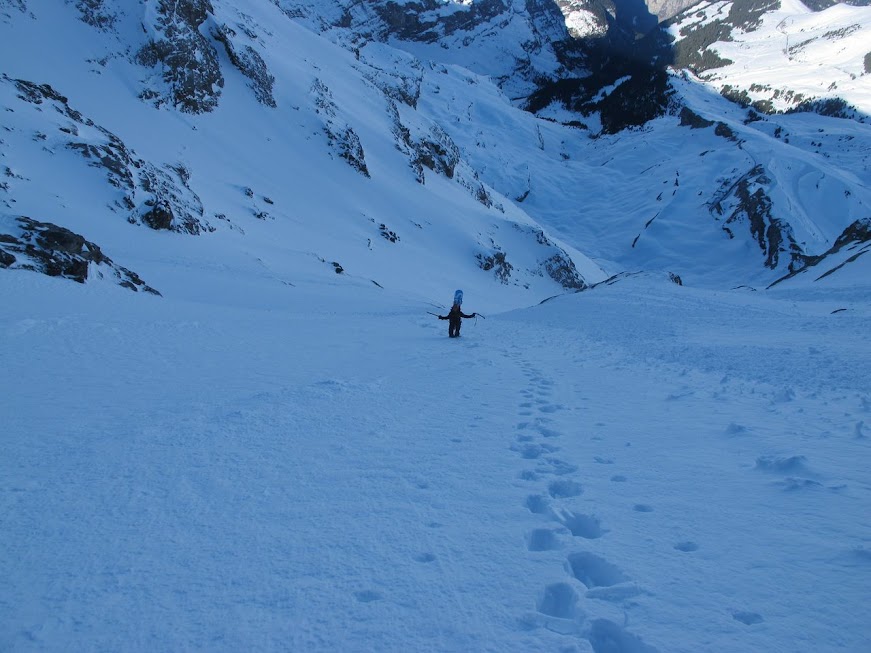 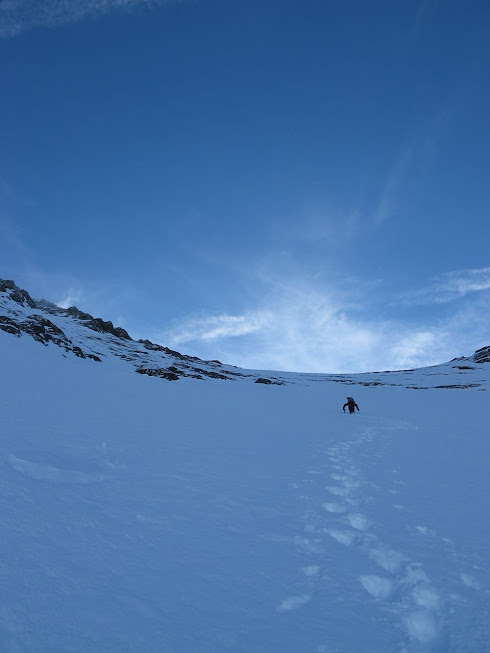 In hindsight, it would have made more sense for us to have switched back to skins for a while, but we had no idea there was this much snow plastered on the face that is normally climbable only with crampons. We thought the depth would soon decrease a lot. It did not. Me struggling to make progress only 500m higher up at 11am. Verts would have been useful: 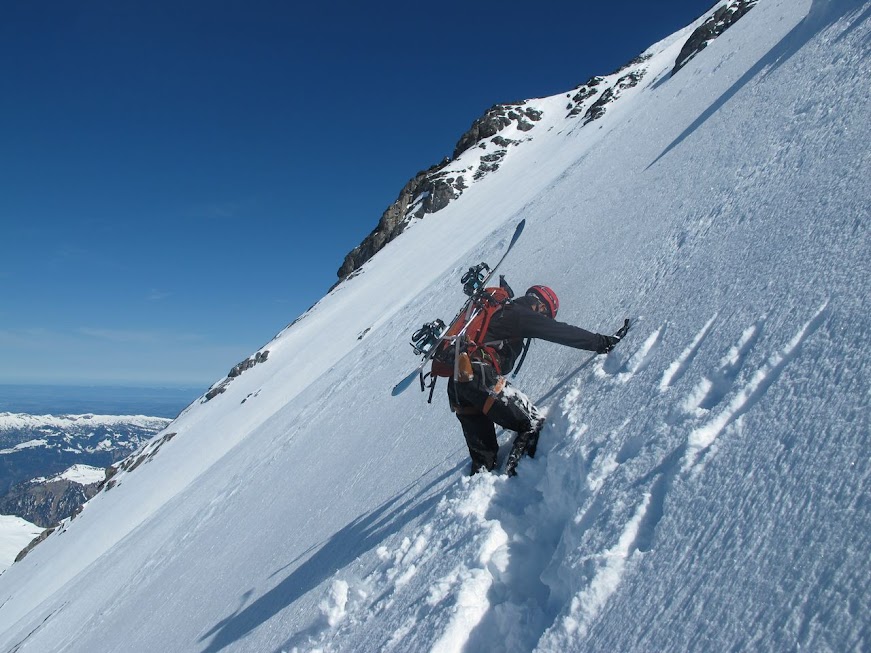 The ride down will be unreal though: 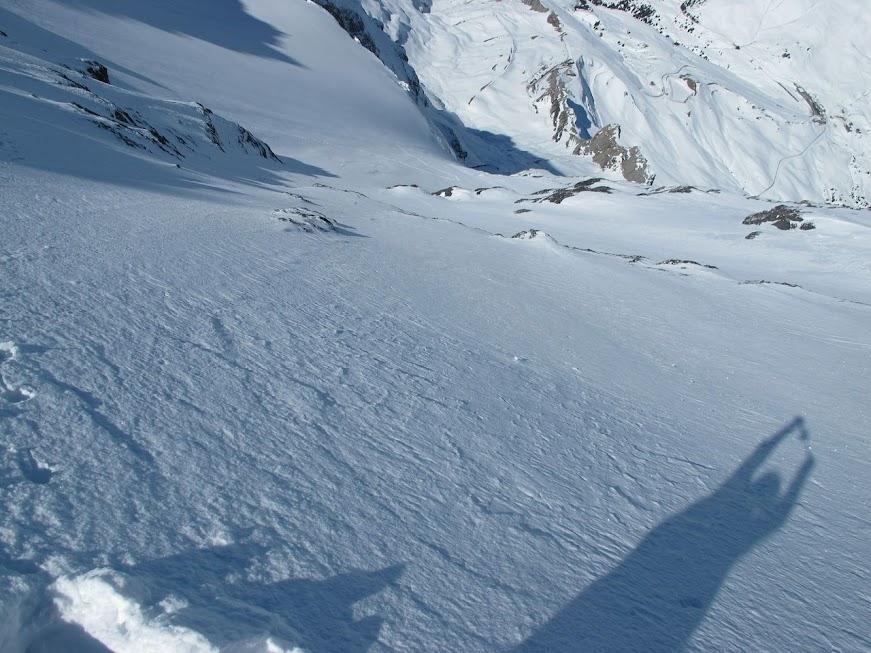 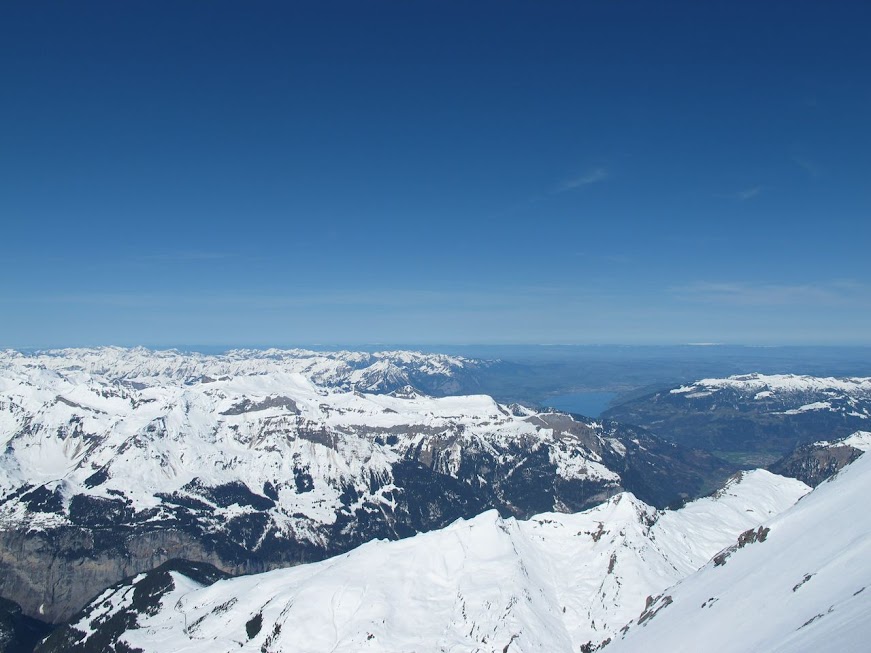 Despite the "counter" camera tilt, you can see that the last hour of climbing got steeper: 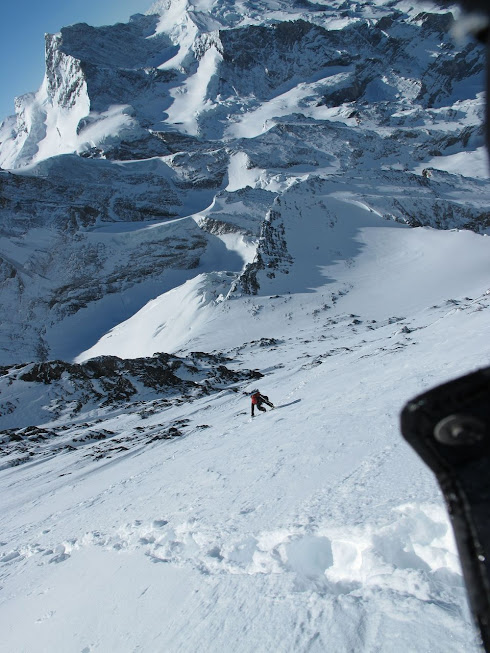 Sick views of the Monch and Jungfrau: 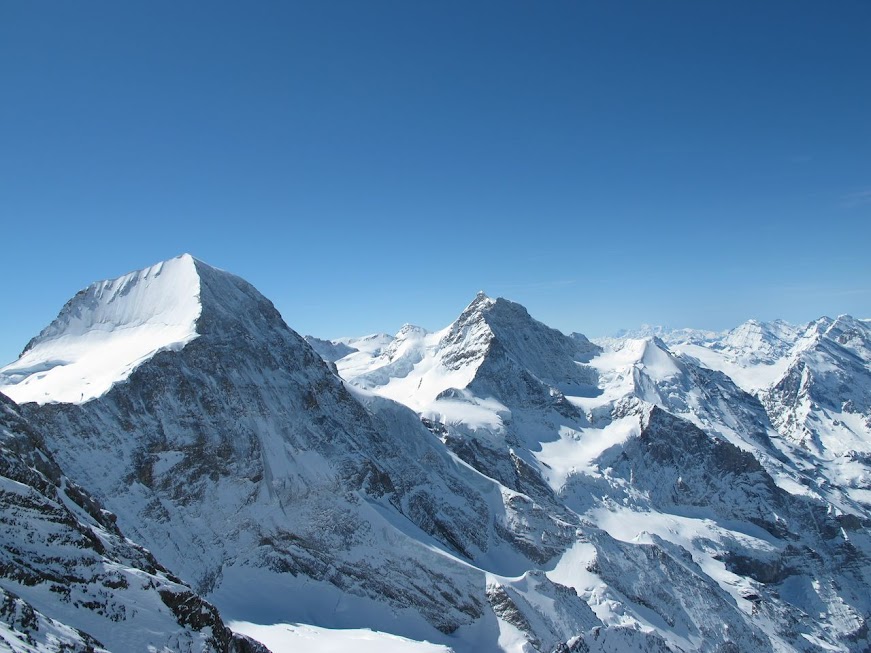 Although we had thought we would summit by 11am, the deep snow had put as at 12pm still below the summit. We had just had 100-150m of vert left to got, but given the amount of snow and the warmth that was coming, we decided it was best to transition and head down:

Flip flops ready for when we get down:

The conditions were amazing: 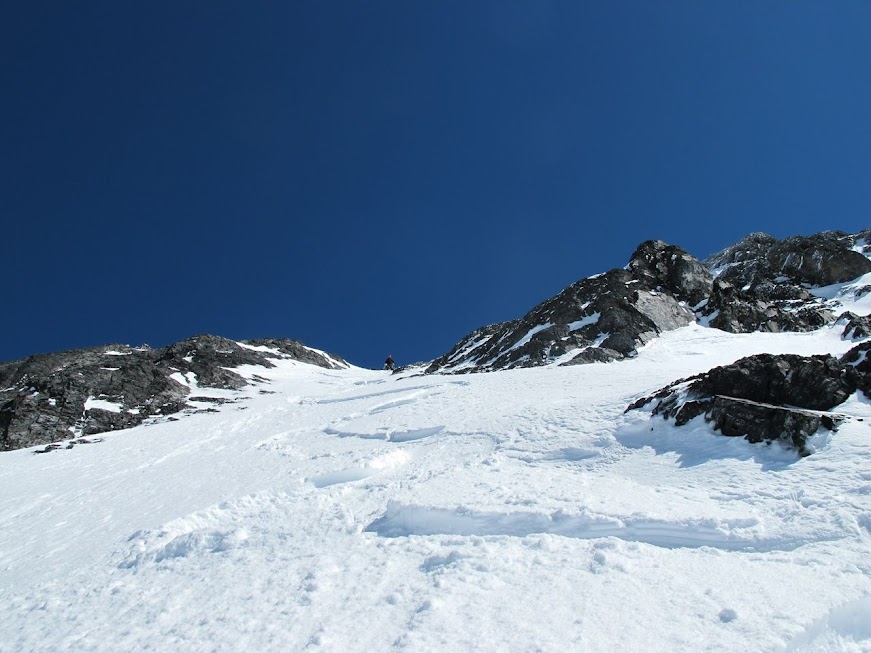 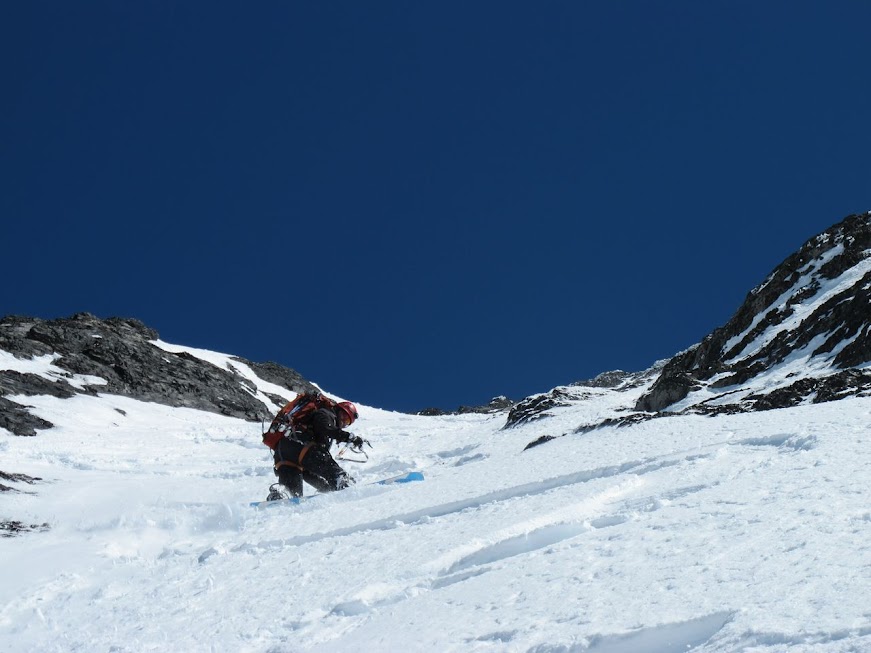 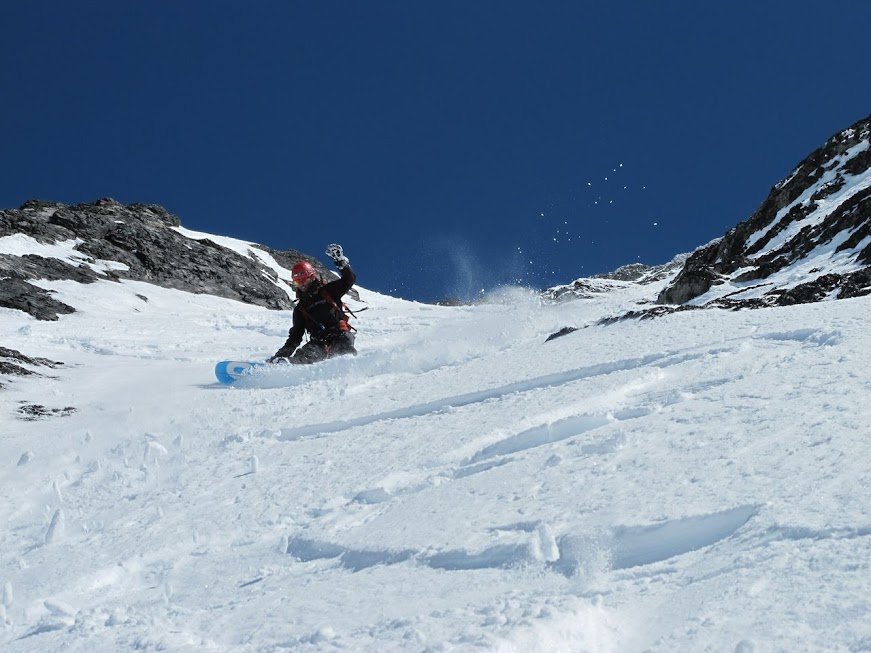 Sorry for the lack of pictures for this next part of face, but I decided that it would be more fun to charge with speed and spray massive amounts of snow on this normally no fall zone 500m of vert, than to be stopping and snapping photos. Really how often is it that you find the Eiger in freeride conditions with deep stable snow? I took the camera from Marc, and then snapped a few shots of him once I was at equal height with the seracs: 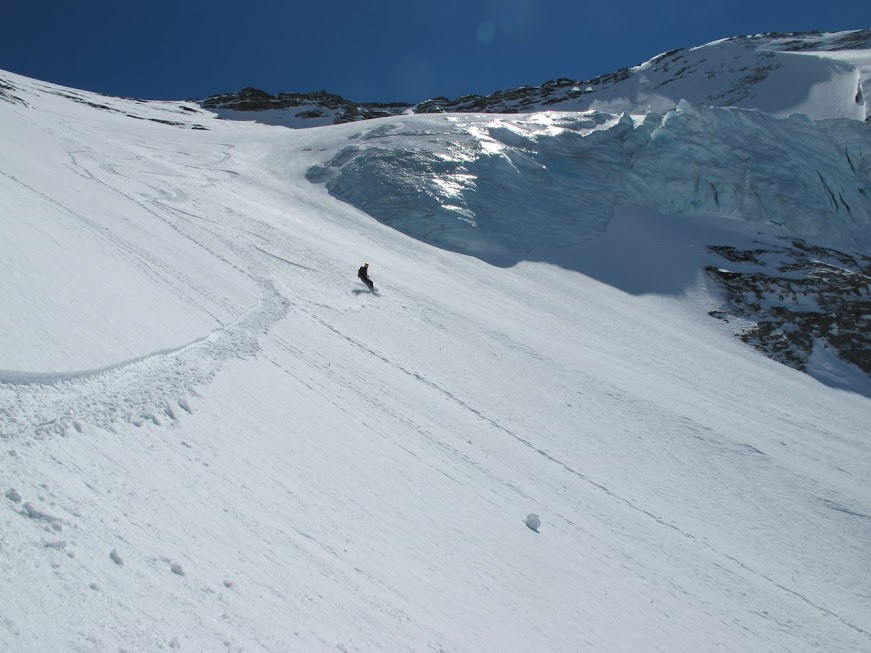 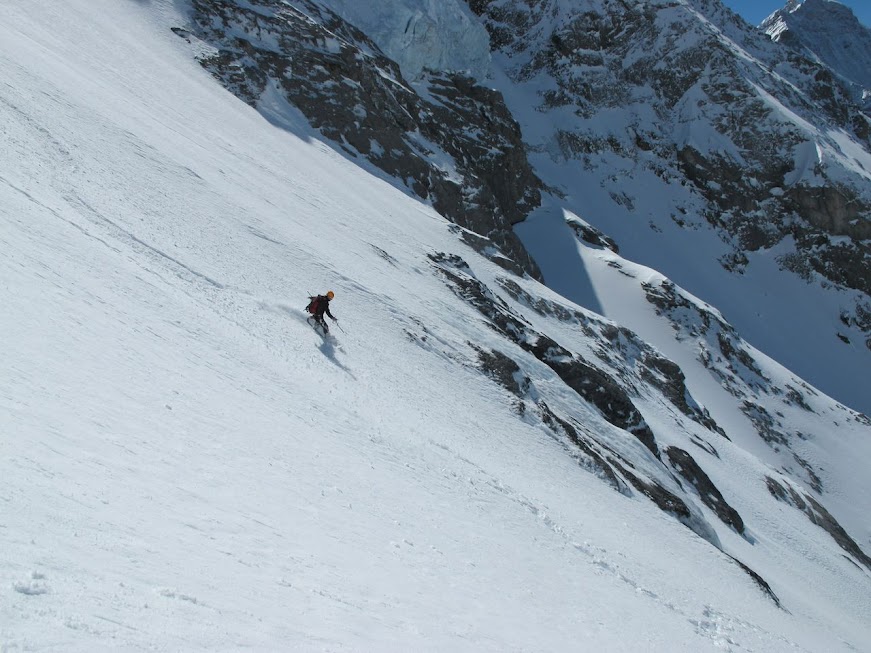 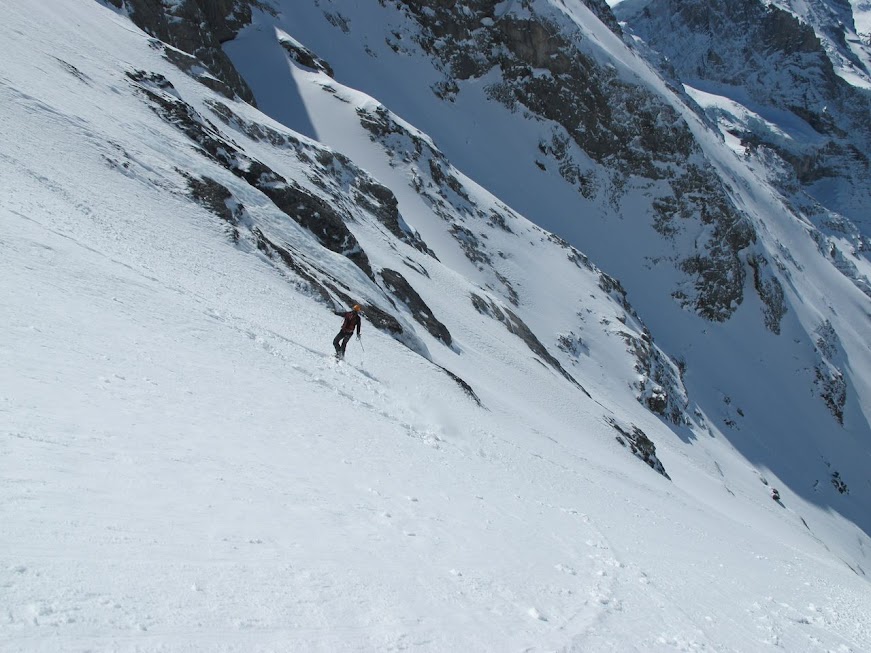 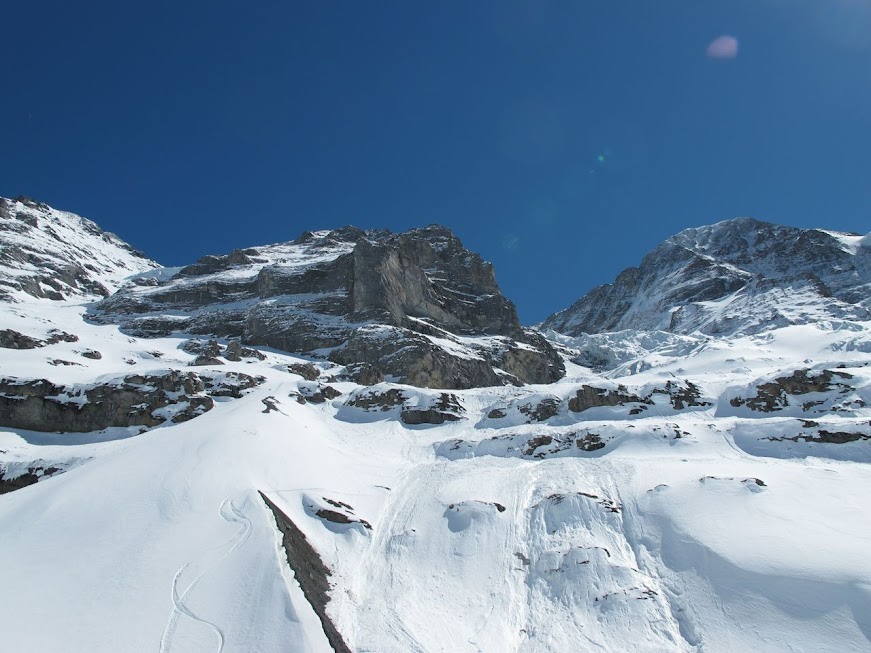 We ended up thinking we could ride straight down to the car after this. Turns out we ended up at the bottom of a chairlift which we needed to go up first before heading down a slightly different path. The lift operator was nice enough to let us up for free after finding out we had been hiking up for 7 hours.

Doesn't ever get any better than that up there: 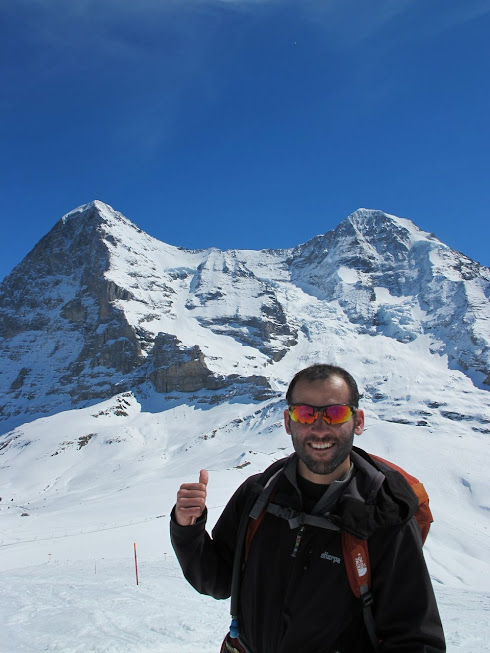 Thanks Marc for an awesome day. 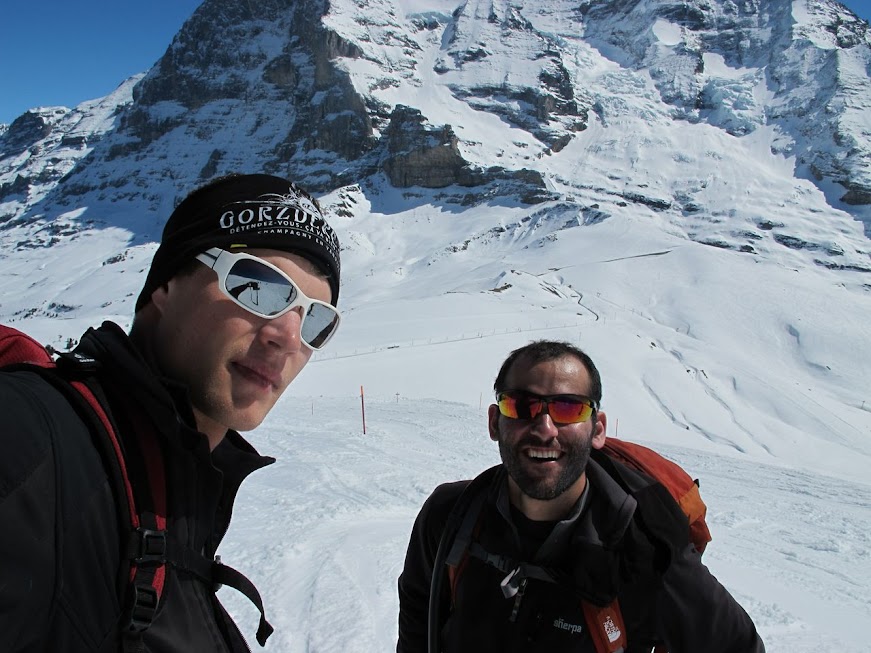 We then enjoyed beers and lunch on the deck at Klein Scheidegg before descending another 1150m (3500ft) of slushy groomers all the way down to the car, making it almost 3000m (9800ft) in all. :)