Editor's Note: This is the first installment in Teton Gravity Research's new series "Behind The Lens." This series will look to follow the cinematographers, photographers, guides, pilots, operators and all-around shakers and movers who follow athletes up mountains, through waves, and down the slopes to get the shot. 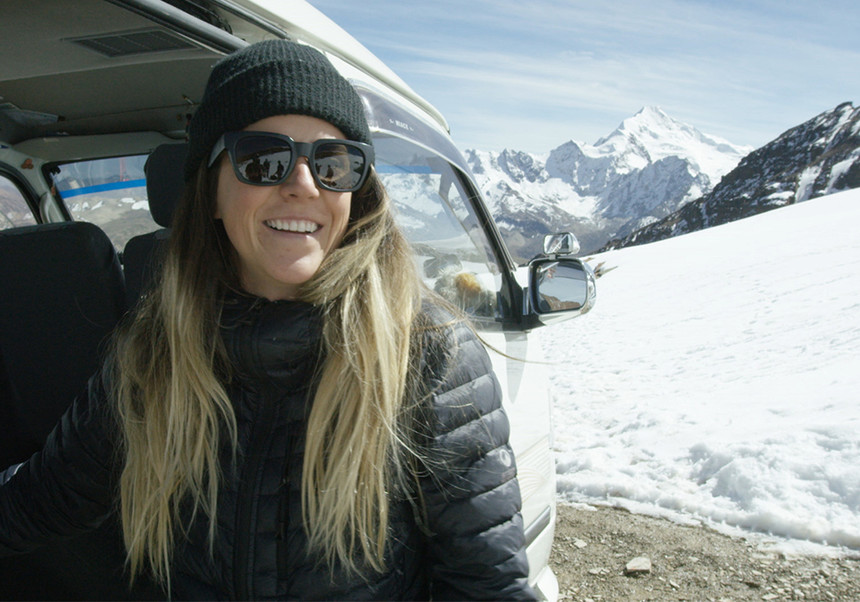 Hadley Hammer is more than just a pro skier. She's also a podcast host, an author (for this very site) and a bit of a fixer when it comes to TGR films. Photo: TGR Archives

You probably already know about Hadley Hammer: TGR skier and mountain athlete extraordinaire, but there's a whole lot more behind those cliff drops and pow slashes. Grit, determination, and an unrelenting desire for adventure of all forms. TGR caught up with Hammer in between some trips to a powder-filled Canada to talk about what goes on behind the lens. Hadley is much more than a ripping skier; she puts in hard work beyond the screen to make all her segments happen, as well as hosting a podcast interviewing fellow rad female athletes.

This will be your third year filming with TGR, how and when did it all get started?

Let me start with when I started filming with TGR. This will be my third winter filming. A few winters ago, I got my official invite to film a segment with Angel (Collinson). Previously, I had focused on competing on the Freeride World Tour, which was rad, but I didn’t re-qualify that year. I got dead last, thanks to me not really wanting to play it safe in comps. Not always the best idea, but thats how I wanted to do it! I was a little nervous because I didn’t know what I would do the next year, but then I got the phone call that everyone wants to get: let’s go film.

So, I started filming with Angel here in Jackson (Wyoming). She’s a good friend of mine from competing, so it was awesome to just jump in with her. I filmed a bunch of that segment by myself during the first few weeks, and then she came in and we busted out the rest. It was totally eye-opening. I feel like people have a skewed perception of what it’s like to film a ski movie. It’s definitely not all skiing pow and having fun. There’s a lot of really hard work that goes into it. You ski one or two runs a day, which can turn frustrating, especially when you’re in Jackson and your friends are lapping you on those good days. By noon, they’re on lap six and you’re still on lap one. But it’s super worth it because it’s super fun to put something like that together.

Before TGR, had you ever shot anything?

Pretty much the first thing I ever filmed was Lynsey Dyer’s Pretty Faces project. I had also filmed a little bit with KGB Productions, another Jackson outfit. Joining the TGR roster was my first real exposure to full-scale production, not just getting a few shots with your friends.

How involved are you with the production side of things at TGR?

What’s really cool about filming with TGR is how involved the athletes actually are with the production side. I was filming with TGR camerawoman Jill Gareffi that season, which was rad. We had an all-girls crew, which doesn’t really happen much. Jill and I would spend hours working on spreadsheets and all the pre-production stuff together to make the Jackson segment happen. We really wanted to do a lot of it inbounds, so that meant working with ski patrol a ton to open stuff that’s normally never open. There was definitely a lot to do, like meetings with ski patrol, working with Jill to find angles and get the timing right each day to capture the best light for each shot.

Since then, you’ve shot another segment at Jackson with the other half of the Collinson duo, and went on a steeps mission to Bolivia with Ian, Johnny, and Sam. How did working on those segments compare?

The Rogue Elements segment with Johnny was the same story as with Angel, working super closely with the production crew to make it go down. That meant helping to set up shots, carrying gear for them, and all the fun behind the scenes stuff.

Bolivia was on a whole new level, because it was such a team effort between all of us. We didn’t have a guide, nor did we have any of the extra hands that we normally bring along since it was such a short-notice trip. It was such a group effort between the two filmers, Jon (Riley) and Dutch (Simpson), and us to make sure we were all safe and comfortable during the trip. We had to work together to find a generator in La Paz, which was great because none of us spoke much Spanish. Johnny spoke a little bit, but that didn’t really help us much. La Paz is an incredible city, but there are few people outside the tourist areas that speak any English.

That wasn’t the only thing that was hard about the trip, given the altitude and the scary nature of the skiing. Since we were on our own, we definitely scaled back the level of risk we were willing to take. There were moments where I thought: “Man, if I get hurt, Ian’s got to carry me back up this mountain, find a donkey on the other side to get to the road, and then it’s still a four hour drive back to civilization.”

Outside of working to film TGR segments, you have a rad podcast going, Nausicaa Cast. Tell me more about that.

I’m still fairly actively running Nausicaa Cast, but it’s definitely really hard with my skiing schedule right now to keep them consistent. So instead, I’ve been doing more one-off episodes, which I love because it lets me really get to know the people I talk to. For me, it’s a format style that really fits my personality more since it’s a little bit longer and more in-depth.

The mountain sports community is so small that it’s so easy to just link up with someone that has a really awesome story to tell. For me, it’s really interesting to interview people that aren’t skiers, because they come from worlds that I often don’t really get. Like ultrarunners will talk to me about why they’re going to run a hundred miles and I’ll just totally geek out on it.

So, what’s the plan for this year?

I’m really stoked that I’m leaving again this week to go back up to Canada to film with Sage (Cattabriga-Alosa), Dane Tudor, and Nick McNutt! Riding with Sage is mind-blowing since he is just so experienced. He knows so many different things about not just skiing, but also filming it, so I’m so excited to learn a ton from him. The plan is to spend a week or so just stacking clips in B.C., then we’re heading out onto a camping mission. The snow looks a bit touchy right now, so we’ll probably be pretty heavy on the pillows, and not venture much higher at least until it all stabilizes.